After a very enjoyable 2 nights in Renmark it was time to head home.  I had ‘strict instructions’ that I was allowed to operate from one park on the way home.  So we headed south out through Berri, and on to Loxton.  And then along the Karoona Highway to the little town of Alawoona.  We continued south from Alawoona on the Alawoona-Lameroo Road, which disects the Billiatt Conservation Park.

The park, which is about 18 km south of Alawoona, is 593 km 2 in size and consists of sand dunes and mallee scrub.  The ecological value of the area was first formally recognised in 1940, when the Billiatt and Peebinga flora and fauna reserves were dedicated.  Following the acquisition of additional land in 1979, Billiatt Conservation Park was formally proclaimed under the National Parks and Wildlife Act, 1972.

Although left largely uncleared, some attempts at farming the land within the reserves were made between the 1870s and 1930s.  Some relics of earlier pastoral activity still exist, including old wells, bores and ruins.  The Pankina Well and ruins in Billiatt Wilderness Protection Area are remnants of Pankina Station, a pastoral lease which existed over the land until 1979.  A small area of vegetation was cleared as part of this development for sheep grazing, but is now naturally regenerating.  A trigonometric point also exists in the southern section of the wilderness protection area.

The Park is home to a total of 93 different native mammals including the Common Dunnart, Mitchell’s Hopping Mouse, Western Grey kangaroo, and the rare Western Pygmy possum.  About 18 species of reptile are also found in the Park.  The Park has been identified by BirdLife International as an Important Bird Area due to the fact that it contains small but globally important populations of Malleefowl, Mallee Emu-wren, and Purple-gaped Honeyeaters, as well as the rare Western Whipbird and Red-lored Whistler.

My wife Marija and I set up in a little clearing on the western side of the bitumen road, amongst the mallee scrub.  I used the normal equipment…the Yaesu FT-817nd and the 40m/20m linked dipole.  There was no shortage of trees and shrubs here to secure squid poles and the ends of the dipole.  It was a warm day, so I set up the fold up table and deck chair as close as I could to some shade. 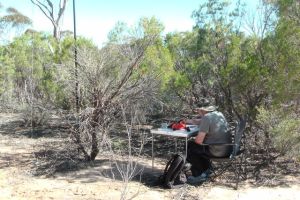 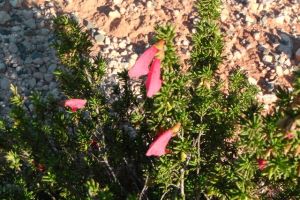 My first contact was with Larry VK5LY, and this was followed by Marshall VK3MRG who was operating portable from Yarra Park in Melbourne.  Marshall had a terrific 5/8 signal with his qrp 2.5 watt signal.  My 3rd contact was with David VK5KC who was portable in the Brookfield Conservation Park near Blanchetown.  David and his wife Joy were also on their way home from the Riverland.  It was great to work David, and bag another ‘Park to Park’ QSO.  Ivan, VK5HS was my fourth contact with a booming signal.

I was then called by Andrew VK2ONZ who was operating from the top of Mount Lambie, VK2/ CT-007, in the Central Tablelands of New South Wales.  Andrew’s signal was up and down dramatically.  He sometimes peaked at 5/6 but then totally disappeared on me, despite the noise floor being virtually non existant.

I also managed another SOTA contact, and that was with Kevin VK3KAB who was portable on Bill Head, VK3/ VN-004.

Again it was good to hear from a number of stations operating QRP.  They included Marshall VK3MRG/p, David VK5KC/p, Andrew VK2ONZ/p, Peter VK3PF, Ron VK3AFW, and Col VK5HCF.  All had great signals and were very readable despite the fact that they were running with low power.

I decided to have a quick listen on 20m and I was glad I did.  There were some excellent signals coming in from Europe.  I managed 3 DX contacts into Austria, Russia and Italy, with good signal reports given for my little 5 watt signal.

The afternoon was getting on, and we still had a 2 hour drive to get home, so it was time to pack up.  It was the end of a great weekend.  I had a total of 22 QSO’s in the notebook from Billiatt CP, including 1 VK5 Park, 2 SOTA contacts, and 3 DX stations, so I was very happy.

I have posted a video of this activation on You Tube.

On Sunday morning, 22nd September, 2013, myself, my wife Marija, Larry VK5LY, & Ivan VK5HS, launched Ivan’s boat from Renmark and travelled upstream to Bulyong Island, part of the Murray River National Park.  Larry and Ivan had told me they had always wanted to activate the island, so my visit to Renmark gave them an opportunity to do so.

The Murray River National Park is located in the Riverland region of South Australia, about 240 km north east of Adelaide.  The Park covers an area of about 13,000 hectares and consists of three separate sections of land – Katarapko, Lyrup Flats, and Bulyong Island.  It was proclaimed in 1991 to conserve the unique Murray wetlands and their flora and fauna, which includes the threatened Regent Parrot, Golden Bell Frog, Murray Cod, and Murray Darling Carpet Python.

The area was originally home to the Erwirung aboriginal people who were a relatively small Aboriginal group that lived on the fertile plains of the Murray.  By 1851, the land surrounding Renmark was held under Pastoral Lease No. 95 by A.B. Cator.  In July 1859, a portion of this lease was taken by William Finke and was subsequently divided into 2 properties named ‘Bookmark’ and ‘Chowilla’.  During the 1860’s and 1870’s the leases transferred hands on a number of occasions.  In 1887 the land was acquired from Bookmark Station by the Commissioner of Crown Lands for the establishment of the Renmark Irrigation Trust by the Chaffey Brothers.  The Chaffey Brothers Irrigation Works Act, 1887, gave the legal right to develop 200,000 acres of land from Spring Cart Gully to the border for irrigation purposes.

At the conclustion of World War One, Bulyong Island was leased by the Returned Serviceman’s League (RSL) as part of its returned soldier repatriation program.  Primarily it was used for agisting horses while they were not being used for agricultural work.  During the mid 1960’s the Renmark Irrigation Trust entered into negotiations with the RSL to obtain the northern portion of the Island for use as an evaporation basin.  The RSL acceded to these moves and by the late 1960’s a series of embankments and an inlet/outlet structure had been established.  On the 20th June, 1991, the island was established as part of the Murray River National Park.

The Murray River NP has an abundance of wildlife including kangaroos, echidnas, sand goannas, emus, and brushtail possums.  Over 140 species of birds can be located within the Park.  It is a valuable breeding and refuge area for numerous birds including the Australian Reed Warbler, Little Grassbird, Superb Fairy Wren, and the threatened Regent Parrot.

During our trip up river we certainly saw a huge array of birdlife including Pelicans, rosellas, Black Swans, Cormorants, Herons, Dusky Moorhens, and Grebes. 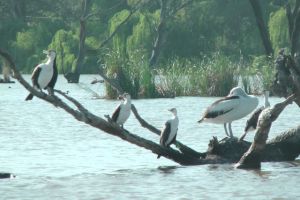 The park’s woodlands are dominated by mallee with an understorey of saltbush and bluebush, while the flood plain and swamp areas feature River Red Gums with a tangled under storey of Lignum. 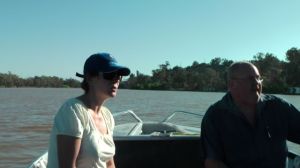 We moored at Bulyong Creek and stepped onto the island which is separated from the mainland by the Ral Ral Creek.  Because it was such a sunny day, we kept an ever alert vigil for snakes.  There are at least 12 species of snake located here including some dangerous snakes including the King Brown.  So we made as much noise as possible, hoping that this might scare any unwanted visitors off into the scrub.

We set up my 20m/40m linked dipole in an inverted vee configuration, supported by a 7m squid pole.  We secured the squid pole to a ‘Bulyong Creek’ sign using some octopus straps.  We rested the Yaesu FT-817nd on the Bulyong Creek sign.  Ivan also set up his end fed and Codan HF transceiver. 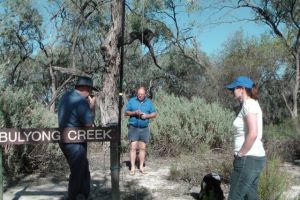 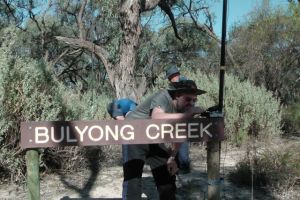 The first contact from the park was with John VK5BJE who had a very strong signal.  This was followed by Andy VK5LA, Brian VK5FMID, and Nev VK5W, all of whom had good signals.  But callers were few and far between so we often took a breather and enjoyed the views whilst listening to the WIA broadcast.

Whilst on the island we had 2 Summits on the Air (SOTA) contacts.  The first was with Andrew VK1NAM/p who was portable on South Black Range, VK2/ ST-006.  And our second SOTA contact was with Mitch VK3FMDV who was on Flinders Peak, VK3/ VC-030.

Unfortunately we did not have as many callers as usual.  This was despite the band conditions being good.  Perhaps everyone was enjoying a Sunday morning sleep in.

After the activation we headed down the Bulyong Creek, and then back out onto the Murray.  The Bulyong Creek was something special, and the seclusion was only spoiled by the occasional passing boat.  The bird life along the Creek was amazing.  Eagles, hawks, a variety of water birds, rosellas, cockatoos, and parrots, were all out enjoying the morning sun.  We also saw a couple of kangaroos taking a drink on the banks of the creek, who quickly jumped back into the scrub as we approached.  We also spotted a goanna just starting to scramble up a nearby gum tree, so we moored the boat and I jumped off the boat to get a photo.  But the goanna was camera shy, so ever time I walked around to one side of the gum tree to take a photo, he/she decided they would crawl around to the other side.  Much to the amusement of Marija, Ivan, & Larry ! 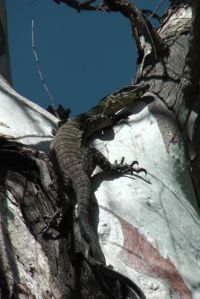 We travelled further downstream along the Murray and travelled passed the Renmark foreshore, and onto Paringa and the lock, before turning back and heading back passed Renmark.  Our only drama of the morning was Larry loosing his hat overboard, which was quickly retrieved.

This was a great morning & a huge thanks goes out to Ivan VK5HS and Larry VK5LY.

On Saturday morning, 21st September, 2013, I gave a presentation to the Riverland Radio Club, on SOTA, the VK5 Parks Award, KRMNPA, & WWFF.  The talk was held at the SES Headquarters at Berri, and a total of 17 people attended.  What was really pleasing was that some members of the Sunraysia Radio Group travelled across the border for the talk.

It was great to catch up with lots of people I have spoken to on the radio, but never met in person.  That included some active SOTA Chasers & Parks Hunters including Colin VK3UBY from Mildura, Andy VK5LA, Larry VK5LY, & Ivan VK5HS.

David VK5KC & wife Joy also travelled up to the Riverland for the talk, and activated a park or 2 on the way home on the Sunday.

Following the talk we had a BBQ and a good ‘chinwag’.  It was a terrific morning & afternoon.  A big thankyou to Larry VK5LY & Ivan VK5HS who organised everything. 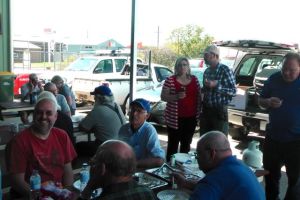 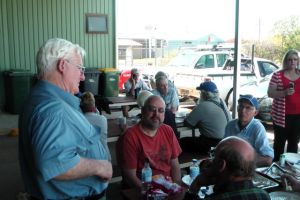 Many thanks to Larry VK5LY and his wife Di, for their hospitality and allowing my wife Marija and I to stay at their house on Friday & Saturday night.  They made us feel really welcome.

The Riverland Radio Group has a website and it can be found at…..

The Sunraysia  Radio Group also has a website.  And it can be found at…..