On Saturday 15th March, 2014, I headed up to the nearby Mount Barker summit for the John Moyle Memorial Field Day (JMFD) which is held annually in March.  The aim of the JMFD is “to encourage and provide familiarisation with portable operation, and provide training for emergency situations. The rules are therefore specifically designed to encourage field operation.”

The contest is held in memory of the late John Moyle who was a long term editor of the Wireless Weekly, (later Radio & Hobbies – later Radio Television & Hobbies) magazine from 1947 until his untimely death in 1960.  MOYLE served with distinction in the RAAF during the Second World War.  He was responsible for a number of innovative solutions in keeping radio and radar equipment working under wartime operations and difficult working conditions.  The WIA decided that a suitable long term memorial to John Moyle would be a Field Day with a focus on portable or field operation. The contest has been conducted annually ever since.

When I awoke on Saturday morning, the weather was ‘lousy’ to say the least.  In fact I was awoken by extremely heavy rain and strong winds.  The weather had certainly broken.  We had experienced a particularly hot summer here in the Adelaide Hills, with about 14 days of temperatures exceeding 40 degrees C.  On one day the temperature reached a scorching 47 deg C.  So as the weather was less than impressive, I wasn’t keen on heading up to Mount Barker summit for the start of the contest at 11.30 a.m.  Instead I waited til later in the afternoon, and decided to participate in the 6 hour section.

So at about 1.30 p.m. off I headed to Mount Barker summit, which is located just a short 5 km drive from home.  Mount Barker summit is about 517 metres ASL, and sadly does not qualify for the Summits on the AIr program (due to issues with 150 metres of prominence).  Despite this, the summit is an impressive feature in the Adelaide Hills, and there are spectacular views in all directions from the summit. 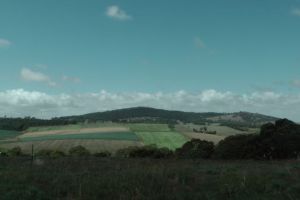 Mount Barker summit was first sighted by Captain Charles Sturt in 1830.  However, he believed that he was viewing the previously discovered, and much higher Mount Lofty summit which is located further to the west.  Captain Collet Barker corrected this error, when he surveyed the Mount Barker area during 1831.  Sturt went on to name the summit, Mount Barker, in honour of Cpt Collet Barker, who was killed just days later by local aboriginals.  Although there is some slight contention, it is believed that the very first Europeans to climb the summit were a six man party on 27th November, 1837.  The group consisted of John Barton Hack, John Morphett, Samuel Stephens, Charles Stuart, Thomas Davis, and John Wade.  The nearby township of Mount Barker (where I live) has a number of streets and landmarks named in honour of many of this group.

There is a road leading all the way to the top of the summit, which can be reached off Summit Road.  My ever reliable and keen wife Marija had offered to come along and help me set up the equipment.  But justifiably so, did not want to stick around in the less than perfect weather.  So we parked the car in the carpark, alongside the telecommunications tower, and walked a short distance up hill to the picnic area established by the Nairne Lions club.

On the way up, we saw a variety of bird life (of the feathered variety), including Adelaide Rosellas, and New Holland Honeyeaters.  There were a variety of native plants in flower, including the banksias and correas.  There has been a total of 28 plant species documented on the summit.

Because the weather was ordinary, we quickly erected the tent and antenna, my 40m/20m linked dipole, supported on a 7 metre squid pole (inverted v).  I then walked a further 50 metres up to the trig point and admired the view for a short time, while I could.  There is a trig point at the top, along with a directional cairn which was erected by the local council way back in 1966, the year after my birth. 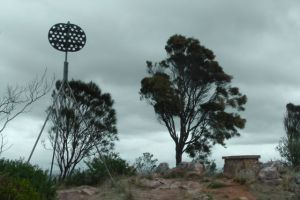 As mentioned previously, there are spectacular 360 degree views from the summit.  On a clear day, and this was not, you can see all the way down to the south to the Coorong and Lake Alexandrina.  There are amazing views out to the west over the Mount Lofty Ranges and the ever increasing township of Mount Barker. 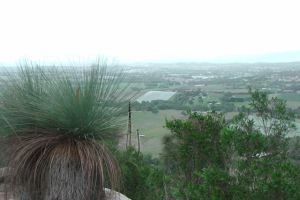 So after some photographs, I headed back down to the ‘shack’ and continued to set up some gear.  The weather was holding off, although it was very threatening out to the west.  I initially set up on one of the wooden tables established at the summit by the local Nairne Lions Club.  And I was visited by a local ham from nearby Hahndorf, who had heard me mention on 20m that I was heading up to the summit.

My first contact was at 0419 UTC (2.49 p.m. S.A. local time) with Jim VK5TR, who I know through the Adelaide Hills Amateur Radio Society.  Jim had an incredibly strong signal coming in from the southern suburbs of Adelaide.  This was followed by VK3ER, and then my old mate Roy VK7ROY.  Despite the fact that it was still early in the afternoon, the 40m band appeared to be in quite good condition. 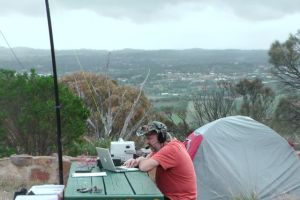 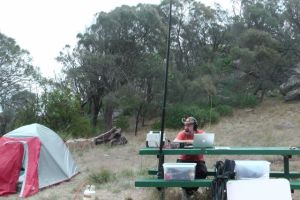 However, my fun on 40m was soon spoiled by the weather which hadn’t stayed kind for very long at all.  The summit was soon drenched in rain and struck by very strong and squally winds.  So it was off to the protection of the tent, which somehow managed to survive the wind, which at times was extremely strong.

I remained on 40m until about 0800 UTC (6.30 p.m.), when I decided to venture over to 20m ssb.  My first contact was with VK6ARG, followed by VK4QD, and then special event station GB0BB in the United Kingdom.  Whilst on 20m, I worked a little bit of DX from the United Kingdom, Russia, Italy, Germany, New Zealand, Slovenia.  But the 20m band seemed to drop out a lot earlier than normal and there were not a lot of takers. 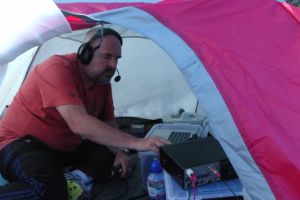 So after the 20 m band dropped out, I headed back to 40m and started calling CQ, and worked a constant flow of callers from all over VK & over in ZL.  The band was in very good shape, but I was fast approaching 9.00 p.m. which signalled the end of my 6 hours of operating time.  I even started to get calls from the U.S.A.  I started to think that I should have commenced operating later in the afternoon.

I went QRT just before 9.00 p.m. and again with the help of my beautiful wife (who had driven up to collect me), we dismantled the antenna and tent, and packed up all the gear.  In the rain too !  And then back to the car, and off to a nice warm bath and a bottle of red !

I ended up with 155 QSO’s in the 6 hour period, which I was a little disappointed with.  But it was a lot of fun.  This was my first time operating portable during the JMFD, and I will certainly be better prepared next year.

I would like to thank the Mount Barker District Council, who gave me permission to operate from the top of the summit.  The lower gate is normally locked at dusk and re opened at dawn.

Below is a video of the activation…..