Late yesterday afternoon (Wednesday 7th January 2015), I ventured out to the Ferries McDonald Conservation Park, near Monarto, about 70 km south east of Adelaide, and about 30 km south east from my home in the Adelaide Hills.  We have been experiencing some very hot weather here, but yesterday a stormfront moved through with some very heavy rain and thunderstorms.  So it was after the weather had settled a little, that I drove up to Monarto.

I headed along the South Eastern Freeway until I got to the Monarto turn off and took the exit. I then travelled south along Ferries McDonald Road, and then east along Chaunceys Line Road, until I reached the carpark at the south eastern corner of the park.

I have activated this park twice before.  Once in 2013, and once in 2014.  So, as this was a new calendar year, another VK5 Parks activator point was up for grabs.  Please have a look at my previous posts for more information on previous activations and information re the park. 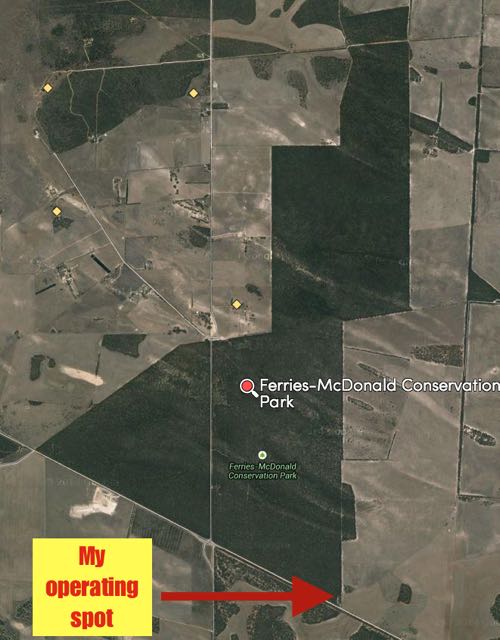 I ran the Yaesu FT-857d for this oepration, 40 watts, and the 40m/20m linked dipole supported on the 7m squid pole.  Because of the rain, I was able to drive the squid pole holder into the ground, which held the squid pole in place, with the assistance of an octopus strap.

When I first turned on the radio, I had grave concerns that I wouldn’t even get a contact.  The static crashes from all the storm activity were S9 +.  But after a single CQ call I was called by Mick VK3FAFK in Stawell in western Victoria.  Mick has become a regular park hunter, and had a beautiful 5/9 signal to Ferries McDonald.  This was followed by a QSO with Matt VK5ZX on the West Coast of South Australia, and then Peter VK3TKK in the mobile.  Peter’s signal was probably the best I have ever heard him.  So despite the static crashes, the band seemed to be in very good condition.

I sat back in the deck chair, avoiding the occasional sprinkle of rain, and went on to work a total of 34 stations in VK1, VK2, VK3. VK4, VK5, VK6, & VK7.  All had excellent signals.  I did experience some ‘bleed over’ from some VK6 stations who came up hald way through the activation on 7.093, and who were very strong.

I then went up to 7.130 and joined the 7130 DX Net where I worked a further 7 stations in VK2, VK3, French Polynesia, and New Zealand, before packing up and heading home.  The DX Net was affected again by one of the stations operating AM on 7.125.

Some of the highlights of this activation were the contacts to Western Australia.  It is often a challenge to make it all the way over there with a good signal report, but tonight there were no problems.  I spoke with Gavin VK3MLU who advised that I was his first contact in the past 15 years.  Gavin has been licenced for about 29 years, but had lost interest in the hobby, and had been absent from the bands for about 14 years.  So it was a pleasure to have a chat with Gavin and be his first contact in such a long period of time.

It was nice as always to get a few QRP contacts in the log.  That included Brenton VK3CM/p, Cameron VK4FAAJ/p, and Ian VK5IS, all running just 5 watts.