Yesterday afternoon/evening (Friday 23rd January, 2015, I activated the Kenneth Stirling Conservation Park, in the ‘Adelaide Hills’ Mount Lofty Ranges.  The park is situated about 16 km east of Adelaide, and is close to the little town of Carey Gully.  It just a short drive from home. 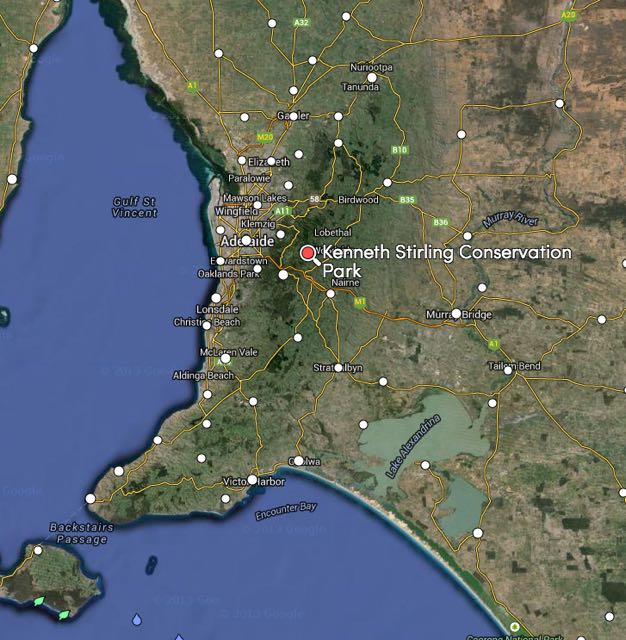 I have activated this park previously on 2 occasions (2013 and 2014).  For details on those activations and more information on the park, please have a look at…..

I have talked about the history of this park previously.  But it is extremely interesting and is well worth mentioning again.  The park is named in honour of Kenneth George Stirling, who was an accountant and benefactor.  He died suddenly in 1973, of heart disease, aged just 38.  Stirling earnt considerable wealth due to shareholding in mining interests, and apparently this paper value embarrassed him.  According to his wife, ‘he believed he hadn’t earned the money the mining boom brought him’ and ‘his main concern was to use it for the good of the community’.  He was a member of the Nature Conservation Society of South Australia and other organisations and over the years made several  anonymous gifts including $200,000 to the Australian Conservation Foundation (ACF) to establish national parks in South Australia. The money he gave to the A.C.F. helped to establish national parks at Montacute and Mount Scott, both near Adelaide, and in the extension of existing reserves at Scott Creek, in the Mount Lofty Ranges, and Warrenben, on Yorke Peninsula.  In 1990 the State government acquired land in the Adelaide Hills for the Kenneth Stirling Conservation Park.

He sounds like a very humble and fascinating fellow.  And it is to his credit, that we now have some beautiful conservation parks in South Australia.  For more information on Stirling, please have a look at…..

The park is unique in that it is separated into four autonomous sections: Wotton Scrub, Filsell Hill, White Scrub, and Burdett Scrub.  The largest section being Filsell Hill.

As I had activated the Wotton Scrub Section previously, I tried to get into some of the other sections.  Firstly, I went to the ‘Filsell Hill’ section.  I travelled down Ostigh Road off Greenhill Road and saw the park on my right.  But the scrub was very thick and very difficult for portable operation.  As I travelled north, I reached a ‘dead end’ and an entrance to private property.  However, Google maps shows Ostigh Road continuing to the north.   It doesn’t!

I then went to the White Scrub section on Greenhill Road, negotiating all of the bicycle riders that were returning to Adelaide, after the world famous Tour Down Under cycling event.  The Tour Down Under brings out the best and worst in some bike riders.  Including some guys over 50 that should never wear lycra!  Anyway, I got to the park and again, found that signposting was very poor and access was difficult.

As I was running out of time, I decided to play it safe and I headed to the Wotton Scrub section of the park, which can be easily accessed off Gum Flat Road.  There is a small carpark here, off the Gum Flat Road, and a nice cleared area (access track) which allows you to string out a dipole.

As the Kandos Group was still running on 7.093, I headed to 7.098 where I put out a number of CQ calls, with no answers.  Was something wrong?  No, there was nothing wrong with the antenna.  The stations on the Kandos Net were coming in very well.  So back to 7.098 and some more CQ calls.  Again, no takers.  I then sent out an SMS message and as a result, David VK5KC gave me a shout with an excellent 5/9 plus signal.  This was followed by David VK5NQP, Col VK5HCF and John VK5BJE.  It appeared that I had finally stirred up the park hunters.  Some of the more interesting contacts here were with Amanda VK3FQSO who was 5/7-9 on just 1 watt, and Greg who was 5/8 also running QRP with 5 watts.

I ended up with a bit of a mini pile up and went on to work a total of 17 stations during this period, in VK3 & VK5.  But it then slowed again, so I decided this was an excellent opportunity to try out my new 15m dipole.  So down came the 7 metre squid pole, off with the 40m/20m linked dipole, and up with the 15m dipole.

I tuned around the 15m band but could not hear a lot of activity, except for the very big pile up high in the band, where EP6T in Iran, was operating split frequency.  However I did hear Ken JG2MQM speaking with VKs and ZLs on 21.263.  So I patiently waited for Ken to finish his QSO and I gave him a call.  Although not a booming signal (Ken was 5/8), I did manage to make contact.  Ken gave me a 5/6 signal report in return.  I then went up a little higher to 21.270 and put out a CQ call and this was answered by Peter ZL1BRL, at Auckland in New Zealand, who was running 100 watts and a Delta loop.  Both Peter and I were experiencing lots of QSB on each others signals.  But  at least my antenna worked.  And these were my first ever 15m contacts whilst operating portable in a park, so I was very happy.

The goat had bleated on my SOTA Goat app on my iphone, and I saw a spot for Rob VK2QR, who was on a SOTA peak in New South Wales, as part of the Summits on the Air (SOTA) program.  So I quickly replaced the 15m antenna, with the linked dipole again, and tuned to 7.090 where I head Rob with a very nice 5/9 signal from Gurkeroo Ridge, VK2/ SW-051, south of Tumut in the Bago State Forest.  Surprisingly, Rob was not all that busy and I managed to make contact after just the one call.  I would also like to congratulate Rob, who made ‘Mountain Goat’ yesterday.  Well done Rob for reaching the 1,000 point mark as an activator.

Unfortunately I had missed Rod, VK2TWR, who had also been on a summit in New South Wales, but had to go clear due to the rain.

I then moved up the band to 7.105 and put out a CQ call and this was answered by the ever keen Peter VK3PF with a nice strong signal.  And this was followed by another very active park activator and hunter, Joe VK3YSP (and later followed by Joe’s wife, Julie VK3FOWL).  I went on to work a further 14 stations after Joe in VK3, VK5 & ZL.  This included Jerry VK3MEK who was running QRP 6 watts from an oval in Melbourne, and Allen VK3HRA running QRP 5 watts, trying out a new end fed antenna in his backyard.

The New Zealand contact was with Rob ZL2BTQ who was maritime mobile in Queen Charlotte Sound, near Picton.  What a beautiful part of the world.  Marija and I travelled to New Zealand for 4 weeks back in 2010 for our honeymoon, and travelled through the Queen Charlotte Sound.  I was very pleased to get Rob in the log.  Below are some photos I took whilst in that area back in 2010.

I then tried my luck on 20m, but I had left things a little too late.  There were not a lot of strong signals coming in from Europe.  However, I did work John EA7BA in Spain and Steve GJ7DNI in the Channel Islands, on 14.156.  The Channel Islands was a new DXCC for me, whilst operating portable.  I then put out a few CQ calls on 14.214, and finally got a call from my mate, Ted VK6NTE with his normal 5/9 plus plus signal.  And then Caleb ZL2ML in Gisborne in New Zealand.  I normally work Caleb on 40m on the 7130 DX Net.  Caleb had a very strong 5/9 plus signal here on 20m.

It was now 8.30 p.m. so I headed back to 40m and checked in to the 7130 DX Net.  My first 4 contacts here, were with Andy VK4TH near Kingaroy in Queensland, William FO5JV in French Polynesia, Brian ZL2ASH in Wellington New Zealand, and Tony VK2RI who was operating portable, on the shores of Botany Bay, with a very nice signal.

During the net, I quickly tuned up and down the 40m band, and found Pedro NP4A in Puerto Rico, calling CQ.  So I gave Pedro a call and exchanged genuine 5/9 signal reports with him.  This was the second time in the past week that I have worked Pedro, whilst out portable in a park.  I then returned back to the 7130 DX Net and worked a further 4 stations in VK1, VK2, VK5 & VK7.

At the conclusion of the net, I put out a few CQ calls on 7.150 and these were answered by Roald VK1FIVE.  However, a few minutes into our QSO, a USA station came up alongside of us calling CQ on 7.152.  This wasn’t too much of an issue, until a VK2 called him, and that was the end of my QSO with Roald.  There was far too much bleed over for us to continue.  I have heard n the recent past, a particular amateur ‘complain’ that Australian amateurs are operating above 7.100 in the evenings, thus encroaching on the DX stations operating in that part of the 40m band.  However, to try operating below 7.100 during the evenings, is almost impossible, with all of the South East Asian activity.

So, after my contact with Roald, I headed up to 7.160 and put out a CQ call, and this was answered by Roald, who had followed me up the band.  I worked a further 12 stations here, including my old mate, Bill W1OW in Massachusetts.  Bill was 5/8 and he gave me a 4/4 signal report.  Not bad, with my 40 watts and a simple dipole.  I was also called by Oscar VK4BOV who was running just 10 watts from an Anam QRP Software defined radio.

When things slowed down a little on 40m, I headed off to 20m to have a quick listen on the Southern Cross DX Net.  However, signals from the USA were very low down.  My last contact on 40m, Jim VK3VBC, who is a regular check in to the Southern Cross DX Net, had warned me that signals were poor.  Most of the activity on 20m was focussed around 14.183 with the EP6T station in Iran, working split.

It was time to head home.  Local time was 10.45 p.m.  I had a total of 61 contacts in the log, including some very interesting contacts.