After the WIA AGM, Peter VK3PF ‘collared me’ and we headed off to Mount Ainslee, VK1/ AC-040 for a quick 2m SOTA activation on Saturday night (9th May 2015).  Another couple of SOTA stalwarts, Gerard VK2IO and Andrew VK1DA were heading for Black Mountain, and we were hoping to get a summit to summit contact with those guys.  This was to be a unique SOTA summit for me.

Above:- Map showing the location of Mount Ainslee.  Image courtesy of mapcarta.com

Mount Ainslee is 843 metres above sea level and is worth 1 SOTA point.  It is located in the north eastern suburbs of Canberra and lies within part of the Canberra Nature Park.  The summit borders on the inner Canberra suburbs of Campbell, Ainslee and Hackett.  It is named in honour of James Ainslee (1787-1844), a Scottish born pastoralist who was the overseer of the large property, Duntroon.  Ainslee was on the Duntroon property between 1825 to 1835 and he was in a relationship with a Ngambri aboriginal woman, Jya Ngambri.  After spending 10 years at Duntroon, Ainslee returned to Scotland, where he died in 1844, aged 60 years.  In fact he died at Jedburgh Castle after hanging himself while awaiting trial for a charge of assault.

There is a lot of information on the internet about James Ainslee which is well worth looking at.  His life story is very interesting. 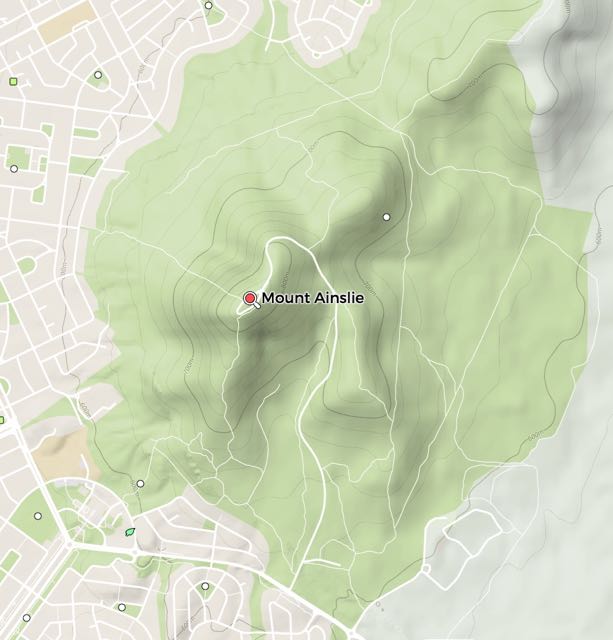 After pulling up in the carpark, we walked a short distance to our operating spot on the eastern side of the summit, overlooking Canberra at night.  It was a very cold evening and quite windy on the top of Ainslee.  Peter started off first and his first contact was with Ian VK1DI, followed by a summit to summit with Gerard VK2IO on Black Mountain.

After Peter had reached his required 4 contacts he handed me the HT and I had a summit to summit contact with Gerard VK2IO and Andrew VK1DA on Black Mountain.  I then made contact with Ian VK1DI and then Andrew VK1MBE and with my 4 qualifying SOTA contacts, it was time to head off to the SOTA Dinner at the Hellenic Club.

I worked the following stations on 2m FM:-