Yesterday (Saturday 19th September 2015) my wife Marija and I went for a drive down the South Eastern Freeway to the small but interesting Mowantjie Willauwar Conservation Park, VKFF-919.  This would be my third visit to the park.   The first being in 2014, for an activation as part of the VK5 National and Conservation Parks Award, and then just over a week ago I made an attempt to get 44 contacts as part of the World Wide Flora Fauna (WWFF) program, but fell short at 14 (the bands were terrible).  So I decided to head back to pick up another 30 QSOs to qualify the park.

For more information on the activation about a week earlier, and some interesting information regarding the park, please see my previous post at…..

On the way to the park I worked both Mick VK3PMG and Tony VK3VTH, who were out portable in Victorian parks as part of WWFF.  I had worked Mick and Tony from home, but as they had such terrific signals into my mobile, I decided to give them a shout.

After arriving at the park, we set up in my normal operating spot, which is about 600 metres in from the gate on the northern side of Placid Estates Road.  For this activation I ran the Yaesu FT-857d, and my 40m/20m linked dipole supported on a 7 metre squid pole.

It was a beautiful sunny afternoon.  Local time was 2.20 p.m. and the temperature was about 22 degrees C.  I had been eaten alive by sand flies and mosquitoes during my previous activation here at Mowantjie Willauwar, but this time I had come prepared with a can of ‘Off’.

Prior to calling CQ I had a quick look around the 40m band and found Norm VK5GI and Greg VK5GY on 7.100, operating out of the Bullock Hill Conservation Park on the Fleurieu Peninsula.  Norm and Greg were running QRP, just 4 watts, and had a nice signal coming in to the Murray Mallee.  After working Norm and Greg I found Mick VK3PMG calling CQ on 7.110 in Dergholm State Park, VKFF-756 with a beautiful 5/9 + signal.  I then tuned up to 7.142 and worked Tony VK3VTH operating portable from the Mount Granya State Park, VKFF-767, again with a 5/9 + signal from Victoria.  Not a bad start….four park contacts to kick off the activation.

I then headed for 7.150 and started calling CQ and this was immediately answered by regular park hunter, Rex VK3OF with his normal 5/9 + signal, followed by Les VK5KLV who was operating portable from the Winninowie Conservation Park, VKFF-820.  I was very happy…my 5th park contact in just 6 QSOs from Mowantjie Willauwar.

A steady flow of callers followed, and then came another park activator.  This time it was Gary VK5FGRY who was in the Morialta Conservation Park, VKFF-783.  And after about a dozen more contacts I was called by Greg VK5GJ and Norm VK5GI had moved to the Cox Scrub Conservation Park.

The band was getting very busy and I had a little bit of QRM from F8CHM in France on 7.151.  But I perservered and worked Brendon VK5FSCC who was portable in the Deep Creek Conservation Park on the Fleurieu Peninsula.  It seemed that everyone was out enjoying the sunshine.  Many of the regular VK5 and WWFF park hunters called in, but it was also pleasing ti get a number of new calls in the log.  Many of whom struggled to get their tongue around Mowantjie Willauwar, which means ‘Native Pine forest’ in the local aboriginal language.

After working a total of 39 stations on 40m I headed over to 20m, and after lowering the squid pole and removing the links, I called CQ on 14.311.  This was immediately answered by the ever keen Albert S58AL.  He must have been there waiting for me.  I went on to work stations in Slovenia, Russia, Germany, France, Hungary, Italy, Spain, Ukraine, Slovak Republic, Japan, Poland, Czech Republic, Israel, Estonia, Belgium, VK4 & VK6.

I worked a total of 47 stations on 20m, before heading back to 40m to see if I could pick up any of the die hard park stragglers.  The band was very busy with lots of European and North American signals coming in.  I found 7.130 clear and called CQ.  Peter VK3ABM came back to my call, and this was followed by Peter VK3PF who was operating portable from Ninety Mile Beach Marine National Park, VKFF-951.  I was Peter’s 44th contact to qualify the park for him.  Well done Peter.

Next up was Peter VK3YE and Scott VK5FSKS who was operating portable from Chelsea Beach as part of flag pole day.  Below is a video of Peter and Scott…..

A few calls later, in amongst the VK’s I heard a European accent.  I asked the VK’s to stand by, and sure enough, Danny ON4VT in Belgium came back to me with a 5/3 signal, and reciprocated with a 5/3 for me.  Wow, was I excited.  Just 40 watts and a meager little linked dipole, and I had Belgium in the log on 40m.  I’m sure I heard one or two more European callers, but the frequency was very busy and I was unable to pull out any more European call signs.

The ‘old’ road which cuts through the park. Now used as a walkway 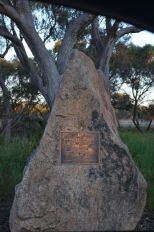 So after 3 hours in the park, I had a total of 107 contacts in the log, including some nice DX contacts on both 20m and 40m.  Thanks to everyone that called, and thanks to those that took the time to spot me on the DX cluster, parknspeaks, and Facebook.

After the activation, Marija and I headed to ‘Fred’s landing’ where we watched the sunset over the Murray River.  We were also fortunate enough to observe two Whistling Kites who were in a nearby gum tree enjoying a late afternoon meal (a freshly caught fish from the river).  I tried to get as close as I could for a photo (didn’t have the zoom lens), and they both flew off, dropping their meal.

6 thoughts on “A second attempt at Mowantjie Willauwar CP, VKFF-919”