Whilst I was in Hattah Kulkyne National Park in Victoria, I had toyed with the idea of activating the Ngarkat Conservation Park, VKFF-0829, in South Australia, after I had crossed the border.  I still had a fair drive ahead of me to get home, but I had worked out that I had enough time for a quick stop at Ngarkat.  I had activated Ngarkat previously, but as part of the VK5 National and Conservation Parks Award, and not the World Wide Flora Fauna (WWFF) program.  So this was to be another unique WWFF/VKFF activation for me. 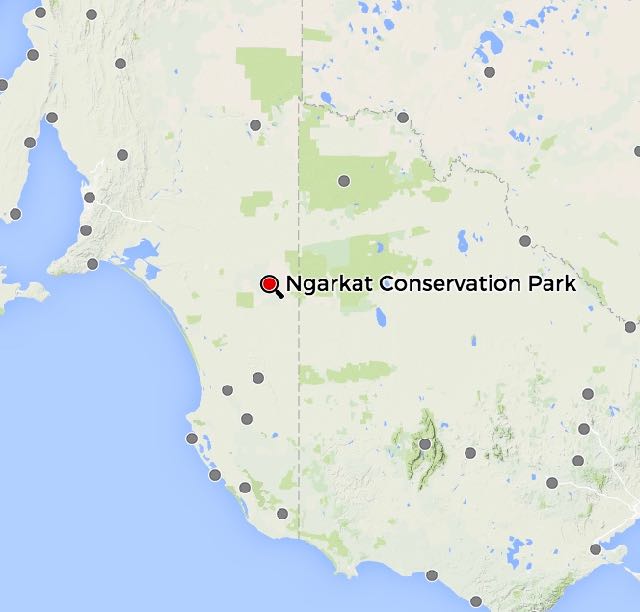 Above:- Map showing the location of Ngarkat CP.  Courtesy of mapcarta.com

So after leaving Hattah Kulyne National Park I drove west along the Hattah Kulkyne-Robinvale road until I reached the Calder Highway and the little town of Hattah.  Don’t blink, because you will miss it.  There was once a post office here but it closed in 1974.  Today there is a General Store, and that is it.  I then travelled south to Ouyen where I stopped briefly for a bite to eat at the Mallee Deli, consisting of a very enjoyable steak sandwich with the lot.  I then drove west on the Mallee Highway, back through the towns of Walpeup, Torrita, Underbool. Linga, Boinka, Cowangie, Murrayville, and Carina, until I reached the Victorian/South Australian border.

Along the way I spoke with Rob VK4AAC/5 who was operating portable from the Padthaway Conservation Park, VKFF-0924.  Rob had a nice signal coming into the mobile from the South East of South Australia.

I stopped off briefly to have a look at the site of the old Rosy Pine school.  The school, along with a number of other outlying schools from the town of Pinnaroo, closed in 1943.  Students from these outlying areas were then required to travel to Pinnaroo by bus.  Today there is nothing left of the school.  But a memorial plaque signifies its previous existence.

I continued on towards the park along Rosy Pine Road, which then becomes Centre Track, and on the way I spoke with Peter VK3PF who was portable on SOTA peak, Jarvis Creek Plateau VK3/ VE-208, which is contained within the Jarvis Creek Plateau Region Park VKFF-0969 (5/6 sent and 5/7 received).  I continued south until I reached the Scorpion Boundary Track where there is an unlocked gate.  I entered the northern side of the park, and paid my $10.00 entry fee, before proceeding into the Scorpion Springs camping area.

Heading south towards the park on Centre Track 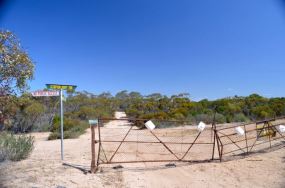 The gate at the Scorpion Springs boundary fence

A sand dune in the park 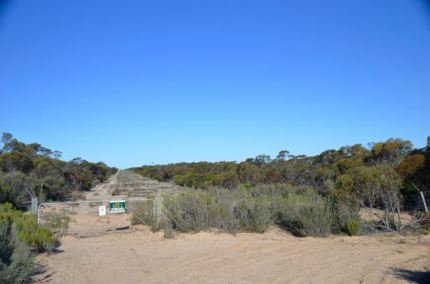 The park is adjacent to the Big Desert Wildnerness Park and Wyperfeld National Park in Victoria.  This is a vast area of remote mallee wilderness in South Australia and western Victoria.  The name Ngarkat (pronounced Narr-kat) takes its name from the Ngarkat aboriginal people who were the original inhabitants of the area.

The Ngarkat Conservation Park is alive with wildlife including Western Grey kangaroos, Little Pygmy Possum, Short-beaked echidnas, Mitchell’s Hopping mouse, and Common dunnarts.  More than 120 species of birds can be found in the park including the rare Malleefowl and the Western Whipbird. 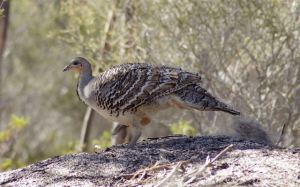 Above:- The rare Malleefowl.  Image courtesy of wikipedia.

It was a very warm afternoon, so the first thing I did was to seek out some shade.  I set up my gear, the Yaesu FT-857d and the 40m/20m linked dipole in the campground.  There was a wooden table and benches under the shade of a gum tree so I took advantage of that.  I attached the 7 metre squid pole to a post on a fenceline, with the assistance of an octopus strap.

Unfortunately there was absolutely no mobile phone coverage out here so I couldn’t send out an SMS message or spot myself on parksnpeaks.

Prior to calling CQ, I hunted around for Peter VK3PF and found him calling CQ on 7.090.  After securing Peter in the log, I headed to 7.085 and started calling CQ.  This was answered by John VK2YW in Wagga Wagga with a strong 5/9 signal.  Half way through my QSO with John the radio cut out.  Bugger!  I have been having an intermittent problem with the connection between the power supply and the transceiver.  But fortunately that was sorted out quickly and I was back on air.  This was followed by calls from Mike VK3ZMD in Melbourne, Adrian VK5FANA on the Yorke Peninsula, and then Mick VK3PMG in western Victoria, all with 5/9 signals.  My 16th contact in the park was with Rob VK4AAC/5 in the Padthaway Conservation Park, VKFF-0924.  Rob called me, so it saved me having to hunt him down.

I worked a total of 34 contacts on 40m in VK2, VK3, and VK5, before trying 20m.  Conditions on 40m were quite good, however with all the storms across Australia, the band was very noisy with strong static crashes.  I called CQ on 14.315 and this was answered by Rick VK4RF with a powerful 5/9 signal.  Rick had tried calling me earlier on 40m but we just couldn’t make it.  My first DX station was Xaver DK4RM in Germany.  This was followed by Gerard F1BLL in France, and then Mauro IZ7EIU in Italy.  Conditions into Europe on the long path were less than favourable, and after 20 minutes, I had worked a total of 12 stations on 20m in VK2, VK4, VK8, Germany, France, Italy, Russia, Australia, and Greece. 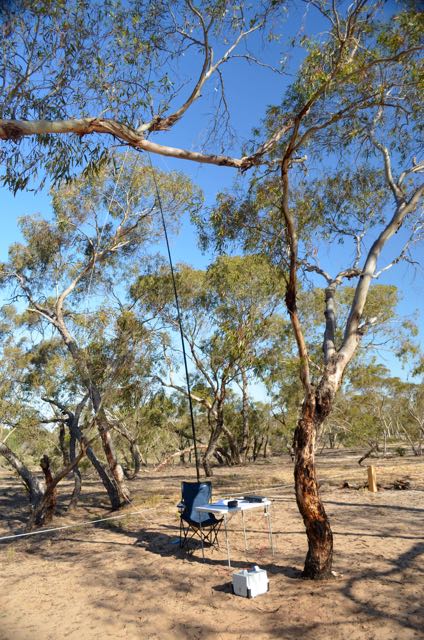 My operating spot at Scorpion Springs 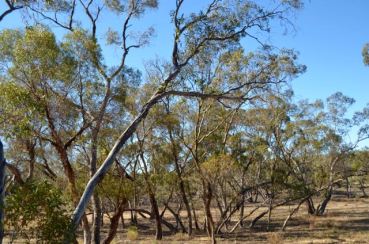 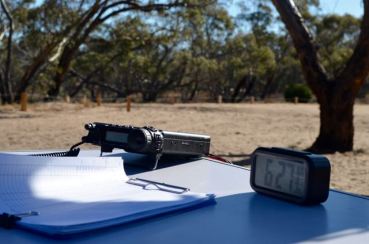 The campground at Scorpion Springs

After 90 minutes in Ngarkat I had a total of 46 contacts in the log and it was time to hit the road.  As I exited the park it was slow going as there were sheep on the road, and many kangaroos.  Once mobile back on the Mallee Highway I booked in to the Kandos Net on 40m which was being run by Tom VK2KF.  I then spoke with Doug VK7DK who had a very nice signal coming in to the mobile. 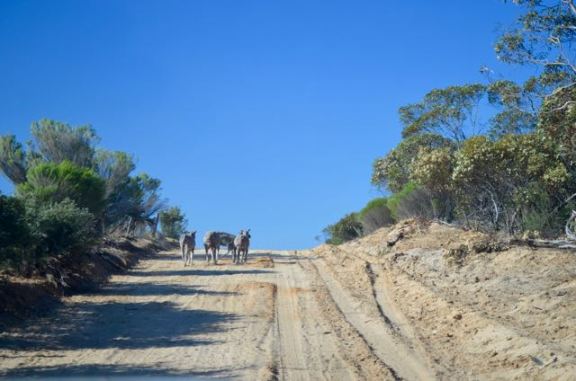 Sheep on the road 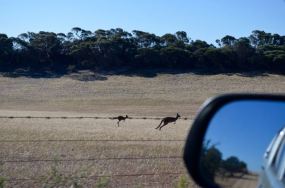 Kangaroos bounding alongside the 4WD 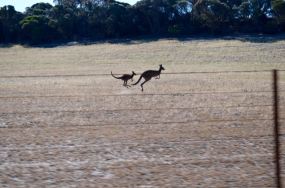 The following stations were worked on 40m SSB from Ngarkat:-