Allen VK3ARH runs the parksnpeaks spotting and alerting site and has allocated reference numbers/codes for the VK5 parks.  These codes have been adopted for use with the VK5 Parks database, which will be rolled out very shortly.  So I have commenced handing out the 5CP numbers during my activations as well as the VKFF reference.

I have activated the Charleston CP on a number of prior occasions for both the VK5 Parks Award and the World Wide Flora Fauna (WWFF) program, so this was just to be a fun activation for me, and hopefully a new park for some of the park hunters.

Charleston CP is about 46 km east of Adelaide, and about 25 km north from my home.

It is a nice drive from my home, out through the town of Nairne, and then through Hay Valley.  I soon reached Inverbrackie, the site of the Air Defence Regiment for the Australian Army, and the former Immigration Detention Centre.  I then took Pfeiffer Road, and headed north east towards the park, through beautiful farming land. 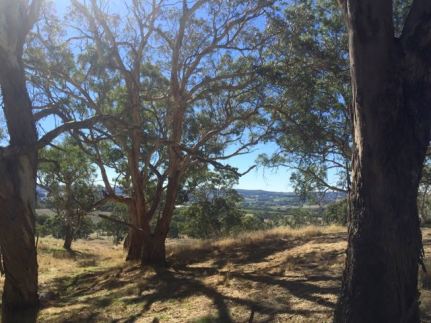 I then took Lewis Road, and soon reached Bell Springs Road, which leads to the northern boundary of the park.  Please note, there is no signposting here for the park.

Above:- The intersection of Lewis Road and Bell Springs Road.

The only access to the park is from Bell Springs Road. I parked at my usual spot, at the first gate, and made a number of trips from the 4WD to a clearing in the scrub.  There is a nice little spot here to park your vehicle off the road.

The western boundary of the park

Cleared land on the western side of the park

Charleston CP is a relatively small park, being about 56 hectares in size.  It preserves a pristine remnant of the the transition between the wetter stringy bark forests on the western side of the Mount Lofty Ranges and the drier mallee woodlands to the east.  The park consists of open eucalyptus (blue gum) woodland with reasonably extensive areas of mature banksia, numerous acacia and grass trees.  The park is surrounded by farming land.  The park is in a near pristine condition despite its surrounds, having never been grazed.

During my time in the park, it was alive with Western Grey kangaroos, Kookaburras, Rosellas, and Yellow Tailed Black cockatoos.

I immediately noticed a small fenced off area within the park, a short distance from the entrance point off Bell Springs Road.  The fencing was of the portable type, and I still have no idea of its purpose.  I could not see anything of significance inside the fenced off area.  It remains a mystery. 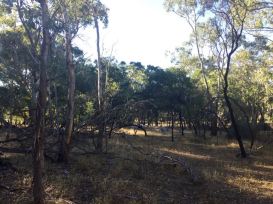 Fenced off area within the park 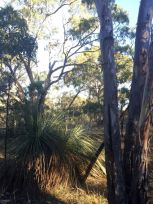 I headed for 7.144 on 40m, my nominated operating frequency.  I asked if the frequency was in use, and this was immediately responded to by Dennis VK2HHA who was patiently waiting for me to come up.  No doubt Dennis had seen my alert on parksnpeaks and the Facebook sites.  Dennis was a strong 5/9 signal, and Dennis gave me a 5/8 from Albury.  Next up was Peter VK3TKK mobile, with a great 5/9 signal from his car, and then Mick VK3PMG who was 5/9 from Stawell in western Victoria.  A mini pileup ensued, with many of the normal suspects including Peter VK3ZPF, Amanda VK3FQSO, Peter VK3PF, and Rick VK4RF/VK4HA. 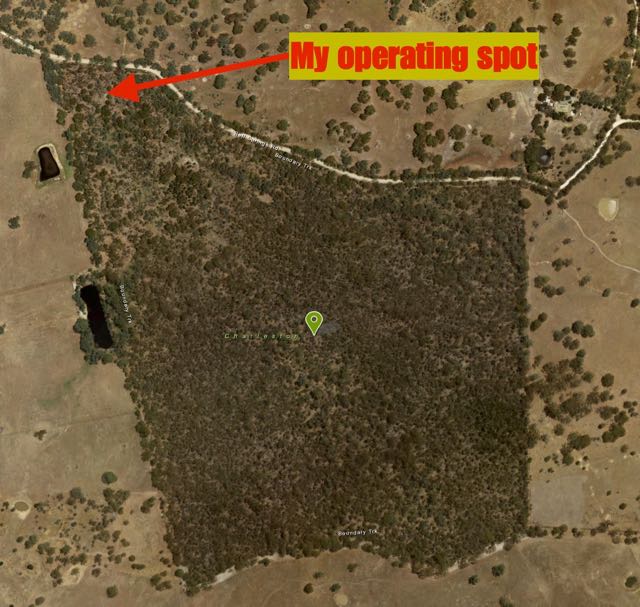 My 15th contact for the activation from Charleston was with John VK5BJE who was operating portable from the Mylor Conservation Park in the Adelaide Hills, further to the south west of my location.  John was a good 5/5 signal to Charleston.  The noise floor in the park was negligible, so I was able to hear John perfectly.  Not long after working John I started experiencing some QRM from just below me.  It turned out to be XE1NVA in Mexico who was working into Europe.

Fortunately the QRM was not significant, so I perservered on 7.144.  After working a total of 20 stations on 40m, the number of callers slowed, so I took the opportunity of trying to find Adrian VK5FANA who I knew was activating the Minlacowie Conservation Park on the Yorke Peninsula.  It wasn’t long and I found Adrian on 7.110, working Adam VK2YK.  Adrian’s signal was quite low down (5/1) but very readable, with a 4/3 being returned from Adrian from across Gulf St Vincent.

Adam VK2YK was keen to get me in the log, so I arranged to QSY back to 7.144.  But once I got there, I found that there  were some other stations just above the frequency, so I went a little higher to 7.152 and called for Adam, who responded.  I then spoke with Ian VK3VIN at Corio, and then George VK4GSF in Toowoomba.  I worked a further 4 stations in VK3 and VK4, before QSYing to 14.310 on 20m.

I self spotted on parksnpeaks, which in turn sends an auto generated spot to the DX Cluster.  I commenced calling CQ hoping to get some long path Europe contacts in the log.  My CQ call was almost immediately answered by Steve G0KIK in England who was 5/5, and this was followed by Bill K4WMS near Richmond in Virginia who was a very strong 5/9.  Steve G0KIK also kindly placed me on the DX Cluster.

I had a number of Europeans calling, but clearly they were struggling with my signal, and a valid signal exchange was not made, so they didn’t make the log.  But I did manage to work into England, USA, Italy, Croatia, and Russia.  A number of the European WWFF regulars called in, including Luciano I5FLN and Sergey RA3PCI.  I also worked Mike VK6MB, and Phil VK6ADF who was portable in the Alexander Morrison National Park, VKFF-0002.  Phil was a very strong 5/9 from his park, which is situated about 281 km north of Perth.

I then lowered the squid pole and erected the 15m dipole and headed to 21.244 where I put out about 5 minutes of CQ calls, with absolutely no takers.  I tuned across the 15m band and only heard one very low down JA signal. 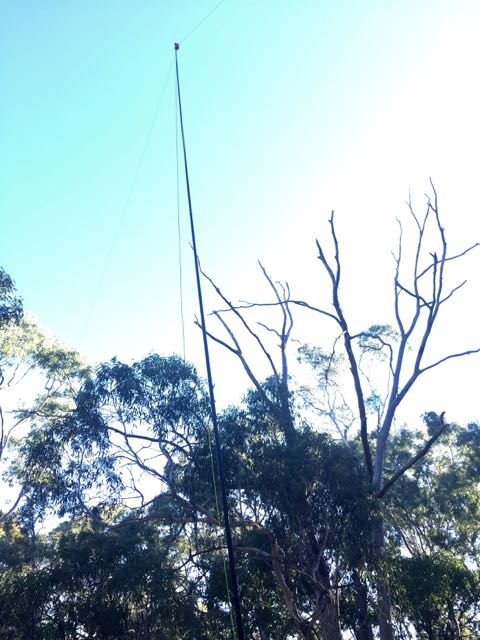 I then returned to 40m  and commenced calling CQ again on 7.144 and this was answered by Phil VK6ADF/p who had followed me down from 20m.  Although Phil’s signal was not quite as strong on 40m, he was still 5/8 from Alexander Morrison NP.  I then worked Mike VK6MB who had also followed me down from 20m.  The frequency was initially clear when I came up, but it wasn’t long before I was starting to experience some QRM from some JA’s on 7.144.

I worked 11 stations from VK2, VK3, VK4, and VK6, with the JA stations ever increasing in signal strength.  The QRM eventually became intolerable so I decided to move frequency.  And this was good timing, because at this point, 2 bushwalkers arrived at the park.  They were very interested in what this crazy guy was doing sitting in the bush on a deck chair with a squid pole in the air.  I chatted with them for about 15 minutes, explaining the hobby of amateur radio, and the various park activity programs.

It was now just after 8.00 p.m. SA local time, so I headed to the 7.130 DX Net.  The Net was extremely busy and it took nearly 25 minutes for the first round of callers to complete their calls, before Roy VK7ROY asked for further checkins.  I checked in to the Net and worked the three DX stations present: Pedro NP4A in Puerto Rico (5/9 plus sent and 5/8 received); Greg NR6Q (5/9 plus sent and 5/9 received); and Brian ZL2ASH (5/9 plus both ways).  The band conditions were incredibly good.

I packed up just after 9.30 p.m. local time, and made the short but slow 20 minute drive home.  Slow, because of the number of kangaroos out and about.  I had a total of 72 contacts in the log.