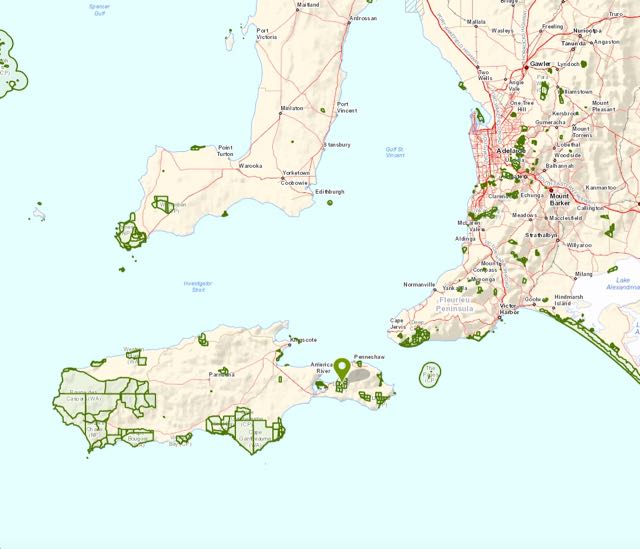 Above:- Map showing the location of the Dudley Conservation Park on the Dudley Peninsula, Kangaroo Island.  Image courtesy of Location SA Map Viewer.

Dudley Conservation Park was established on the 1st January 1970 and is 1,768 hectares (4,370 acres) in size.  It was dedicated in 1970 to conserve Kangaroo Island Narrow-leaved Mallee.  The conservation park lies on the Dudley Peninsula on the eastern end of Kangaroo Island, about 10 km south-east of American River and 12 km south-west of Penneshaw.

The Dudley Peninsula was originally known as Presquila Gallissoniere and also as the MacDonnell Peninsula from 1857 to 1986.  The first reported European name for the Dudley Peninsula is “Presquila Gallissoniere” which was given by the Baudin expedition.  In 1857 it was named  the “MacDonnell Peninsula” by William Bloomfield Douglas after Richard Graves MacDonnell, the sixth governor or South Australia.  In 1986, the peninsula was  renamed as the Dudley Peninsula.  The Hundred of Dudley had been proclaimed on 13th August 1874 by Governor Anthony Musgrave.  The hundred is reported as being named by Governor Musgrave after his father-in-law,  Sir David Dudley Field, who was an American jurist.  Musgrave had married Field’s daughter, Jeannie Lucinda Field. 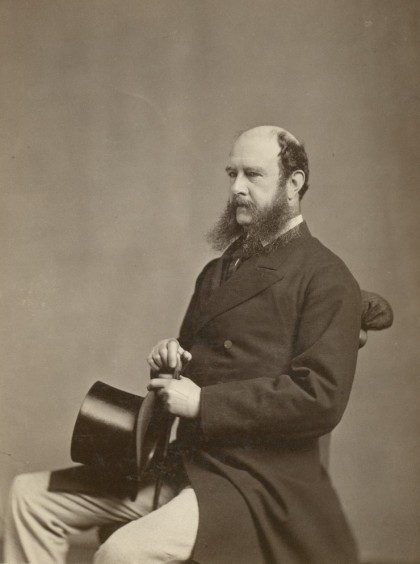 Above:- Governor & Lady Musgrave.  Images courtesy of Bonzle and Wikipedia

The conservation park’s vegetation is mostly an open scrub of Eucalyptus diversifolia and E. rugosa, with E. cneorifolia, the Kangaroo Island Narrow-leaved Mallee for which the park was dedicated. 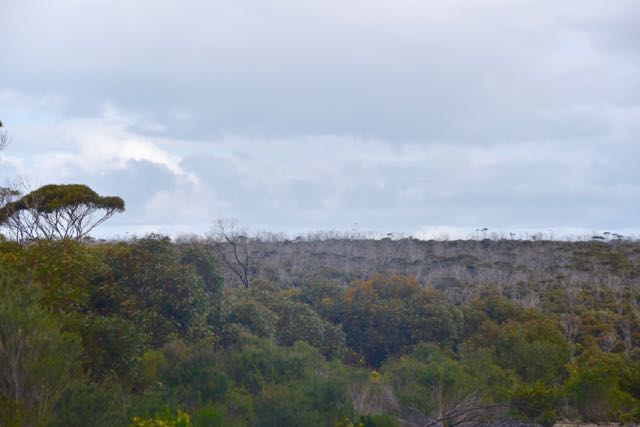 Sadly, the weather had turned, and the sunshine had disappeared and had been replaced by quite heavy showers.  I was hoping it was going to clear by the time I reached Dudley, but it hadn’t so I sat in the 4WD for a few minutes until the shower activity had cleared.  I turned off the Hog Bay Road and then travelled south along Sandhurst Road until I found a clearing in the scrub and this is where I set up.  Fortunately the blue sky made a welcome re-appearance.

My first contact in Dudley was with Mick VK3GGG on 7.144, followed by Tom VK5EE in the south east of SA, and then David VK5PL in the Barossa Valley.  Despite it being a weekday, there was a steady flow of park hunters from VK2, VK3, VK4, VK5, VK6, and VK7.  Greg VK5GJ at Meadows in the Adelaide Hills running his usual 4 watts called in with a beautiful strong 5/8 signal.  I was very surprised to work Craig VK6VCK on 40m at this time of the day with such a strong signal from his mobile.  Craig was 5/5 to me and he reciprocated with a 5/3 signal for me over in Western Australia.

The 40m band was in good condition and there was absolutely no noise in Dudley, so it was a pleasure to be on air.  I experienced a little bit of QRM at one stage from a ZL3 in New Zealand who came up just 1 kc below me on 7.143.  But I think he was politely asked to QSY by some of the hunters.

Three Park to Park contacts were to be logged for this activation.  The first was with Marc VK3OHM/1 who was on SOTA peak Black Mountain VK1/ AC-042 in VKFF-0834.  This was followed by a QSO with Neil VK4HNS/p who was in the Bald Rock National Park VKFF-0011.  And finally with Rob VK4AAC/3 in the Port Phillip Heads Marine National Park VKFF-0954.

After working a total of 44 stations on 40m (and having qualified the park for WWFF) I headed off to 20m where I worked Rick VK4RF/VK4HA and then Mike VK6MB on 14.310.  Signals were strong, but despite many CQ calls, I had no further takers on 20m.  A few final calls were put out on 80m but again, no bites there.  Unfortunately I could not self spot on parksnpeaks as there was no mobile phone coverage at my location.

I was happy with a total of 47 contacts in the log, and it was off to my final park of the day, Parndarna Conservation Park.