On Sunday morning (14th May 2017), Mother’s Day, my wife Marija, my mother in law, and my son and his girlfriend, and my daughter, all headed out for a late breakfast at the local cafe.  It was a great morning, celebrating Mother’s Day.  Marija and her mum had planned to go shopping that afternoon, so I decided to head down to Strathalbyn to activate the Old Laucke Flour Mill for the Mills on the Air Weekend. 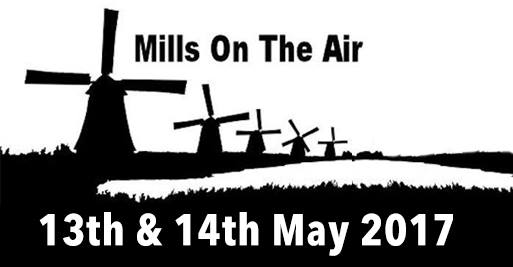 Strathalbyn is located about 57 km south east of Adelaide, and is situated on the banks of the Angas River.

Strath Albyn is derived from two Gaelic words – ‘strath’ meaning ‘broad valley’ or a ‘valley with a river running through it’ and ‘Albion’ meaning ‘hilly land’.  The town has more than 40 heritage listed buildings, including St Andrews Church which overlooks the Soldiers Memorial Gardens and the river.

And another one of those historic buildings is the old flour mill which was built by Donald Gollan in 1849.  It located on the corner of Commercial Road and Hill Street in the centre of Strathalbyn.  It is a four storeyed rectangular building which was constructed of random rubble walls with dressed stone quoins at corners and openings.   The roof is corrugated iron hip and skillion design on timber framing.  Gollan sold the mill to William Coleman in 1850/1851.  Coleman was  aprominent figure in Strathalbyn’s municipal history, and he oversaw the mill as it received grain from the flourishing agricultural hinterland of Strathalbyn.

The flour mill and grain store, c. 1840’s, with an aboriginal camp in the foreground.  Image courtesy of http://www.aussietowns.com.au

The mill was subsequently run by the Johnston family from 1883 until 1928 when it was sold to the Laucke family.  The old mill was replaced in 1961 with a newly built mill just down the road at Strathalbyn.  Laucke is still a very well known name in the milling industry and are renowned internationally for the production of a wide range of high quality flours for the food industry and home bakers. 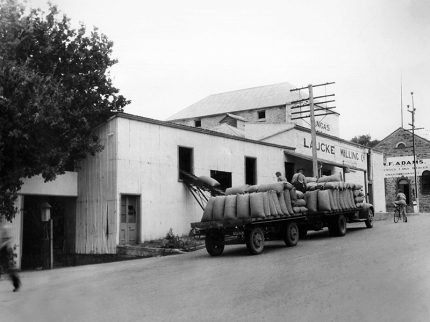 Above:- Eary images of Laucke Flour Mill.  Courtesy of http://www.laucke.com.au

A very interesting video on Laucke Flour Mills can be found at the ABC’s Landline website.  Here is the link……

Directly opposite the old mill is the former Coleman’s Grain Store which was built by William Coleman in 1869 as the store for the Angas Mill.   The building also served as a hall for dances and public meetings prior to the construction of the Institute (now Town Hall), and later as a site for agricultural shows when the land to the north was the showgrounds.  It is a simple rectangular building with one large room, gable ends, round headed windows and a door placed centrally in the main gable facade.  It is constructed of random rubble walls, without quoins, tuck pointed on two street facades.  A small tram line crossed the road to the mill.

Strathalbyn has been in the news a bit over recent years due to a huge problem with the Little Corella population.  They have destroyed significant vegetation within Strathalbyn including the pine trees around the Angas River.  And they, along with Sulphur Crested Cockatoos were quite active during my activation. 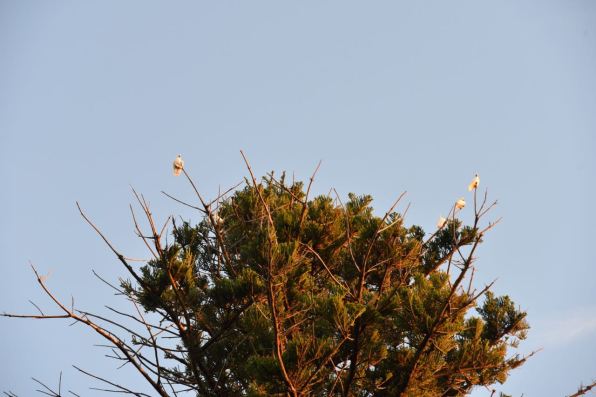 I set up right alongside the mill.  I ran my normal portable station for this activation, consisting of the Yaesu FT-857d, 40 watts output, and the 20/40/80m linked dipole supported on the 7 m telescopic squid pole, inverted vee configuration.

Much to my pleasure, when I turned the transceiver on, the noise floor was pretty good considering I was in the heart of town.  The noise was around strength 5.  I commenced the activation by calling CQ on 7.095.  Number one in the log was Sergio VK3SFG who has become a regular park hunter during my park activations.  This was followed by Brian VK3BBB and then my wife Marija, who not surprising was 5/9 ++ on ground wave.

Contact number 11 was with Mark VK4SMA who was portable in the Mogill Conservation Park VKFF-1594 in Queensland.  Nine QSOs later I was called by Jonathan VK7JON and his wife Helen VK7FOLK, who were activating the Hellyer Gorge State Reserve VKFF-1139 in Tasmania.  Next up was David VK3BI who was operating portable at Andersons Mill at Smeaton in Victoria.  It was nice to get a Mill to Mill contact.

I logged a total of 39 stations on 40m from VK2, VK3, VK4, VK5, and VK, before heading off to 14.310 on the 20m band.  Much to my surprise, Ivan UR9IDX in Ukraine came back to my call with a strong 5/8 signal.  I was quite excited, hoping that more Europeans would follow.  But sadly that was not to be the case.  Ivan was my only European caller.  And in fact he was my only caller full stop.  Five minutes of CQ calls yeilded no takers.  So I QSY’d down to the ANZA DX Net, where I booked in and logged 4 stations, including Jim WA4YBC in Georgia, USA, and Joe K5KT in California, USA.  When the net wrapped up I tuned across the 20m band and logged Mario 9A7C in Croatia.

I then headed to 3.610 on the 80m band, hoping to log some of the South Australian stations.  But unfortunately Adrian VK5FANA on the Yorke Peninsula was my only caller, despite Adrian spotting me on parksnpeaks and me placing my frequency on some of the Facebook sites.

I then put a phone call in to Tony VK5MRT, a local Strathalbyn resident, and mate of mine, and invited him down to pay me a visit and get on air.  Whilst waiting for Tony to arrive I headed back to 7.095 on the 40m band and called CQ.  I logged 4 further stations before Tony arrived, and we swapped the mic.  Tony had soon filled up 3/4’s of his log sheet which was great. 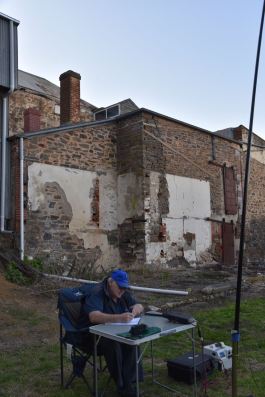 After spending about 45 minutes on air, Tony headed off, and I jumped back into the ‘driver’s seat’ and called CQ on 7.095.  I was very pleased, as there was no shortage of callers.  I had soon logged a further 33 stations, including Oliver ZL1XS in New Zealand.

It was now 5.40 p.m. and the sun was disappearing fast.  And with that, so did the temperature.  It had dropped down to 7 deg C.  I decided to give 80m one last quick go and I’m pleased I did, as I logged special event station VI5WOW, with Steve VK5SFA on the mic.  And also my good wife Marija VK5FMAZ.

I had enjoyed another great day out in the field with a total of 87 stations in the log on 20, 40 & 80m SSB.  It seems that Mills on the Air activity may be on the increase here in Australia, which is great news.  Any activity which creates more activity on the amateur bands is a good thing.

District Council of Strathalbyn, 1985, ‘Heritage Survey of the Fleurieu Peninsula’