Yesterday afternoon (Wednesday 17th May 2017) I finished work at 3.00 p.m. local time and headed the short distance back home to collect my radio gear.  It was a miserable afternoon, with shower activity all day.  I had planned to activate the Mount George Conservation Park 5CP-147 & VKFF-0784 as VK5WOW/p, and despite the poor weather, I decided to continue with the park activation.

Mount George CP is just a short distance from my home, about a 10 minute drive.  The park is situated about 21 km south east of the city of Adelaide. 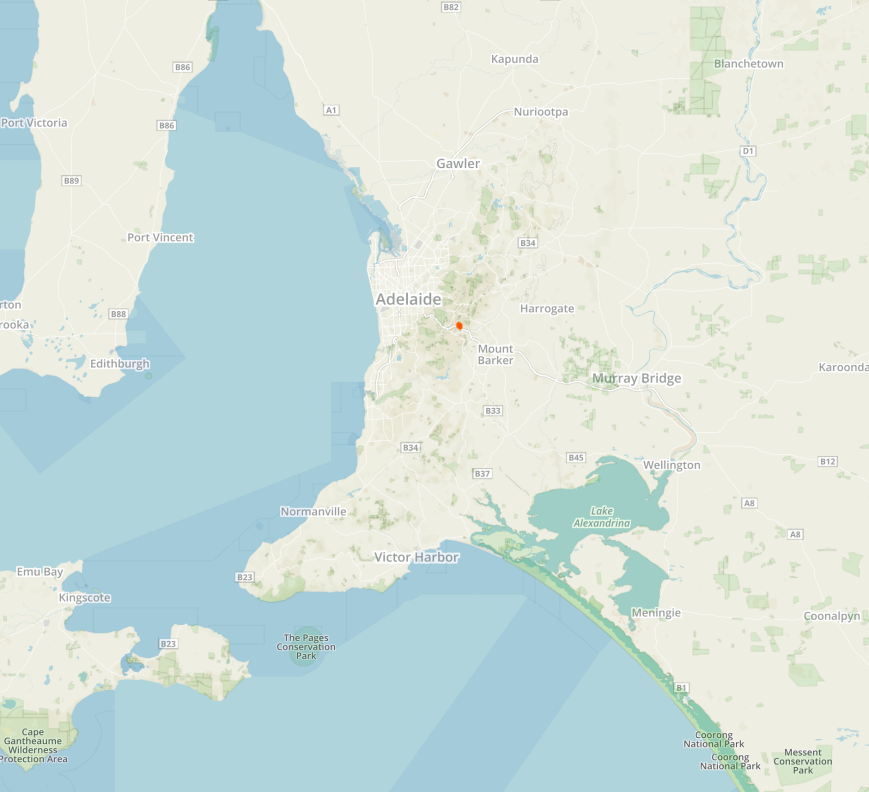 Map showing the location of the Mount George Conservation Park in the Adelaide Hills.  Map courtesy of Protected Planet.

Mount George Conservation Park was proclaimed on the 7th November 1996 and conserves 85 hectares of important native vegetation in the Mount Lofty Ranges ‘Adelaide Hills’.  The park was originally 67 hectares in size before the boundaries were extended in 2003, adding a further 18 hectares.  The park is characterised by steep slopes adorned with Stringybark Open Forest.  The State endangerd Mountain Gum can be found in the park.  The park also contains creeks, wetlands, and freshwater bogs.  The Mount George summit, 520 metres, is located within the park.  Sadly it does not have the required prominence for the Summits on the Air (SOTA) program.

I set up in my normal operating spot, the carpark at the end of Mount George Road, where there is a picnic ground.  With the help of my wife Marija, who had popped in on her way home from work, I set up the annexe of the Toyota Hi Lux.  As this was to be a VI5WOW activation, I needed to operate under the conditions of the VK5 National & Conservation Parks Award, which does not allow me to operate from inside the vehicle.

I headed to my nominated operating frequency of 7.144 on the 40m band.  My first contact was with Les VK5KLV at Port Augusta with a good 5/8 signal.  This was a little down compared to normal.  I generally receive Les 5/9.  This was followed by Peter VK3TKK mobile, Rick VK4RF/VK4HA, and then Steve VK4QQ.  Band conditions seemed to be down compared to normal, and it was quite slow going.  I reached 10 QSOs, qualifying the park for VI5WOW for VKFF, in around 14 minutes.

The showers had not let up, but the annexe of the Hi Lux provided good cover.  Marija headed back home to collect the side awning, which we had left out of the vehicle.

I worked a total of 39 stations on 40m from VK1, VK2, VK3, VK4, VK5, VK6, and VK7.  Local propagation was virtually non existant, with just 4 South Australian stations in the log.  Three of those were in close proximity to Mount George, so signals being via ground wave.  It was nice to make the trip all the way over to Western Australia, with Rich VK6HRC and Jarrad VK6FFAR logged.  I also spoke with Peter VK3PF/p who was activating SOTA peak Mount Dundas VK3/ VS-045.

My operating spot, sheltering from the rain.

Just before 5.30 p.m. local time I headed off to the 80m band.  I didn’t bother trying 20m as I had left my run a little too late.  I called CQ on 3.610 and this was answered by Colin VK4PDX who had followed me down from 40m.  I was then called by Adrian VK5FANA on the Yorke Peninsula, Hans VK5YX and Mike VK5FMWW in the southern suburbs of Adelaide, and then Bill VK5MBD at Red Hill in the Mid North of the State.  I logged a total of 28 stations on 80m from VK1, VK2, VK3, VK4, and VK5.

I then headed back to 7.144 on 40m and worked Bruce VK2HOT who had followed me up from the 80m band, followed by Mark VK4SMA, and then Marija VK5FMAZ.  But it was very very slow going, with very few callers.

At 0930 UTC I booked in to the 7130 DX Net.  Sadly, band conditions were absolutely awful, and I could only hear a handful of stations.  I remained on the net, for just one round, logging Brian ZL2ASH and George VK4GSF.

At the request via Facebook of a few VK5’s, I then headed back to 80m.  It was still wet and cold, and I didn’t plan on hanging around for long.  I logged a further 9 stations from VK3, VK5, and VK6, before going QRT.

I had a total of 84 contacts in the log. 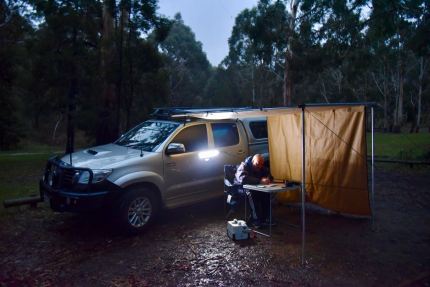 In the Mt George CP