We had no planned park or SOTA activations for day eleven (Tuesday 14th November 2017).  We had booked a cruise out of Gipsy Point to view the White-bellied Sea Eagles which we were really looking forward to.

After breakfast we headed off to the Mallacoota Bunker Museum which is operated by the Mallacoota and District Historical Society.  The museum is housed in a bunker which was  major Advanced Operations Base used by the Royal Australian Air Force during World War Two for Communications. 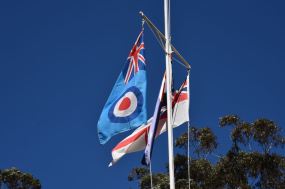 The Bunker housed wireless equipment and trained operators who were listening to coastal shipping and gathering intelligence – surveillance which was further collated and sent to Melbourne.

Today the bunker acts as a museum and contains a large amount of Mallacoota’s unique WW2 history and the local history of the district.  We were fortunate enough that during our visit, a large number of people were visiting the museum, and as a result some of the museum staff conducted a talk which was absolutely fascinating.  Entry to the museum is only $5.00 which we thought was very low.  Marija and I highly recommend a visit to the museum if you are visiting Mallacoota.

As we were leaving the museum, we pulled over in the vehicle to work David VK2NU/p who was activating SOTA peak VK2/ HU-074.

We then headed out of Mallacoota and visited the little town of Genoa.  Today it is little more than an historic pub, a small general store and the historic Genoa Heritage bridge.  Genoa is the last township on the Princes Highway before New South Wales, or the first town in Victoria.

The bridge is the second parallel truss girder bridge to have been built over the Genoa River.  The first, opened in 1916 by Mrs. Alexander, was constructed entirely of wooden piles.  The structure failed to withstand the 1919 floods and collapsed.  However by 1928, the present bridge had been opened, but this time reinfoced concrete piers, founded on concrete cylinders were used to support the structure.  Genoa also had two other river crossing points.  The first was 100 m upstream and was used prior to any bridge construction.  The other was a lower level structure which served between 1919-1928 whilst the now Heritage bridge was built. 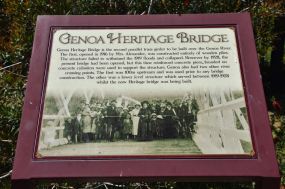 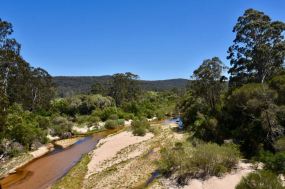 Another interesting thing to have a look at whilst in Genoa is the memorial which commemorates the discovery by Norman Wakefield of Tetrapod footprints.  In 1971, Norman Wakefield discovered the footprints laid down on sandstone of the upper Genoa River Gorge in the Coopracambra National Park, in mid Devonian times, around 380 million years ago.  This was verified by paleontologist James Warren. 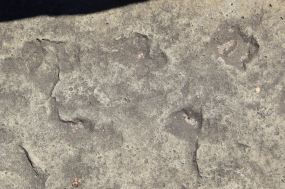 The Tetrapod, an animal with four feet, were the first animals to evolve on the land from water.  Their predecessors were fish.  The Tetrapd resembles a very large salamander.

Above:- A prehistoric Tetrapod.  Courtesy of pininterest.

We then drove back along the Genoa-Mallacoota Road and in to Gipsy Point.  WHilst waiting for the cruise we both worked John VK2AWJ/3 who was activating the Alfred National Park VKFF-0618.  John was quite low down, as Alfred was pretty close to were we were parked, but we comfortably made it.

Our cruise with Captain John Gerard’s Wilderness Cruises was scheduled for 1.30 p.m.  This was certainly one of the highlights of our trip.  The cruise was 2 & 1/2 hours long and included afternoon tea.  The cruise got you up close and personal with the very impressive, White-Bellied Sea Eagle.  John, the captain, was a very friendly guy and clearly knew his stuff.

The White-bellied Sea Eagle is about the same size and shape as a Wedge Tailed Eagle.  It is readily distinguishable by its contrasting crisp white and ashy grey plumage.  Their wingspan is about 1.8 – 2 metres. 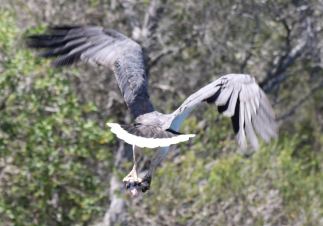 John fed the Sea Eagles during the cruise.  Unfortunately my zoom was to close to pick up good photos during the feeding process, but Marija snapped the great shots below using the i-phone. 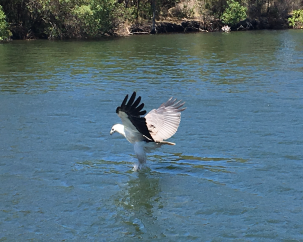 We also saw a number of Whistling Kites. 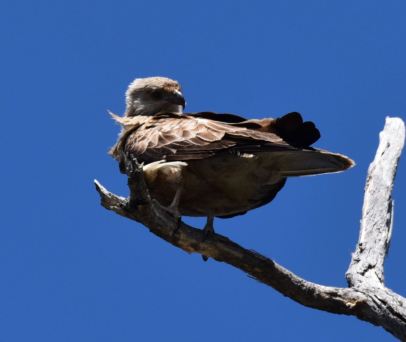 We were also fortunate enough to see a number of juvenile White-bellied Sea Eagles on the cruise.  At one stage, one of the juveniles landed in the water and was ‘attacked’ by its parents, apparently in an attempt to get the juvenile to be dependent and leave the area.

A number of other birds were sighted, including a Kingfisher, which was a little too quick for me to catch on camera.  It flew into its hole on the bank of the river and didn’t come back out, despite us waiting for a few minutes in the hope that it did. 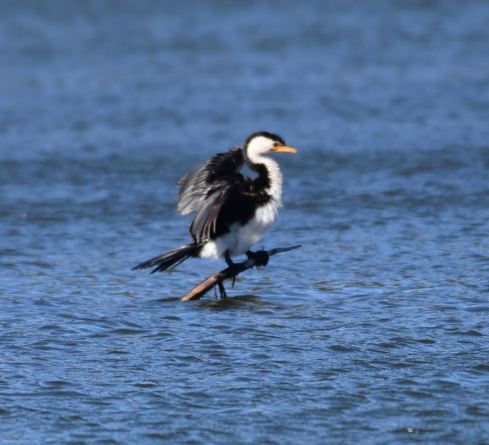 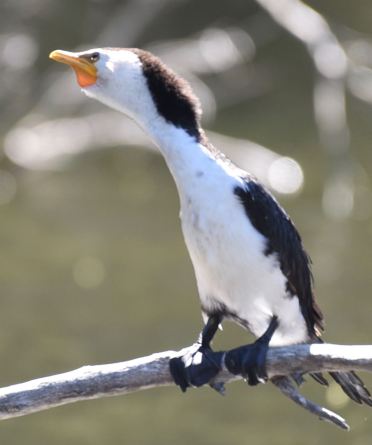 We also saw a number of Gippsland Water Dragons, which according to John are declining in the area due to illegal hunting and the black market.

Here is some short video that Marija took using the iphone…..

At the end of the cruise we headed back into Mallacoota and drove out along the Betka Road, south of the town.  There were plenty of kangaroos out here enjoying the afternoon sunshine.

We drove out to Quarry Beach where we viewed the spectacular marine sandstone sedimentary rocks.  These date back to the Ordovician period, around 500 million years ago.  This is from a time when Australia was part of Gondwanaland, prior to when Antarctica split away from Australia. 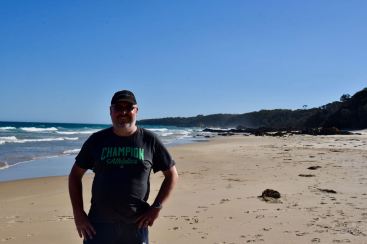 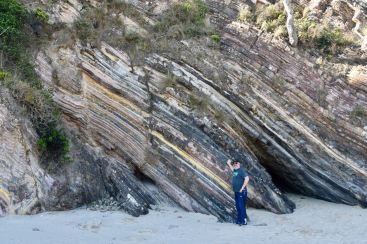 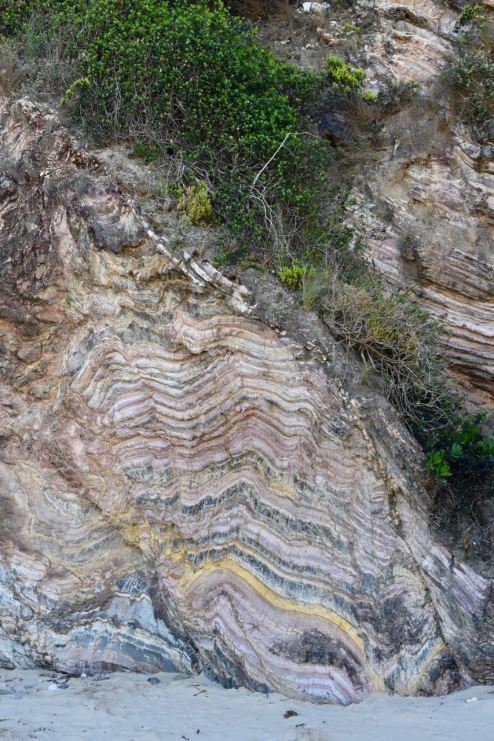 We continued on to Secret Beach.  A path and a set of steps leads down to the beach.  The walk down is well worth it.  During our visit we were the only ones on the beach, other than a pair of Australian Pied Oystercatchers. 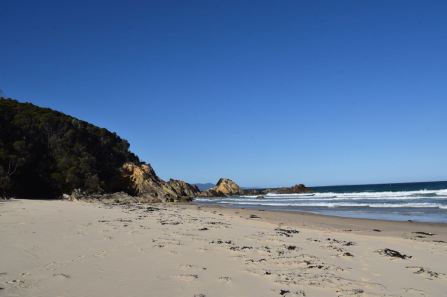 After leaving Secret Beach, we soon entered the Croajingolong National Park.  Our intention was to travel to Shipwreck Creek, but when we saw a sign advising that it was a very long, bumpy and rocky journey, we decided against the trip as it was approaching 6.00 p.m. Victorian local time.

Instead, we decided on a very quick park activation from the vehicle, running the Icom IC-7000, 100 watts, and the Codan 9350 self tuning antenna mounted on the rear of the Toyota Hi Lux.   I called CQ on 7.134 and this was answered by Glen VK4FARR, followed by Rod VK7FRJG, and the Greg VK5LG.  Tony VK5MRT then called, followed by Peter VK5KX, with my last contact being with Steve VK4QQ. 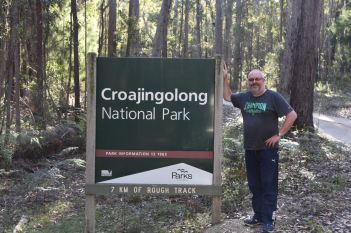 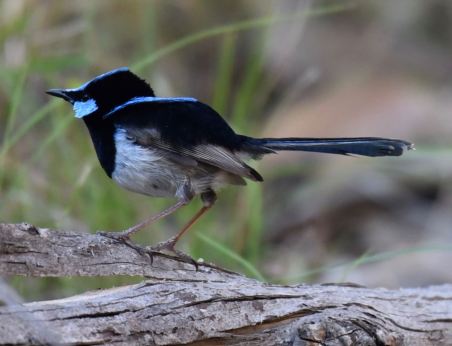 We headed back into Mallacoota, where the rainbow lorikeets were very active in the flowering native shurbs.  Marija and I went out for dinner at Lucy’s, a chinese restaurant in Mallacoota.  We enjoyed a very nice meal there and then headed back to the Bed and Breakfast.

2 thoughts on “Day 11, plenty of sightseeing and a quick activation of Croajingolong National Park VKFF-0119”