Today (Sunday 20th May 2018) Marija and I headed out north to visit my dad and stepmum.  Sadly Dad has not been in good health of late, so it was nice to catch up for lunch and a chat.  Dad and I enjoyed sitting back watching a DVD of the Avalon airshow.  Dad has always been keen on aviation.

We left at around 2.30 p.m. and decided to do a quick activation on the way home at the Cobbler Creek Recreation Park VKFF-1699.  This is just a short drive from my dad’s home.  The park is around 25 km north east of the city of Adelaide.

This was to be a unique park for both Marija and I as activators in the World Wide Flora Fauna (WWFF) program.

The Cobbler Creek Recreation Park is 266-hectare (657-acre) in size and was declared a recreation park in 1989.  The park provides an open space barrier between the suburb of Golden Grove and the suburb of Salisbury.  The park is bounded by a number of main roads and is bisected by the four laned The Grove Way.   It is surrounded by housing.  There is a pedestrian underpass under The Grove Way which connects the two sections of the park.  The park was named after the watercouse ‘Cobbler Creek’ which crossed the northern part of the park.  The creek was named after the occupation of one of the early settlers of the area.  You can read about this a little later in this post. Above:- Aerial shot of the Cobbler Creek Recreation Park, looking south back towards the city of Adelaide.  Image courtesy of google maps

In a 1962 State Government report, the park’s area was identified for use as future open space.  It was proposed that a golf course would be established along with other sporting facilities.  In 1970 the land was purchased by the South Australian State Government was part of the metropolitan open space (MOSS) network.  The park’s location was chosen to provide a development-free buffer between the existing suburbs of Salisbury and the proposed Golden Grove development.

Much of the land was a farming property known as Kelway Park, the western, cleared portion of which had been cropped.  The park was owned and managed by the State Planning Authority until 1982 when control passed to the National Parks and Wildlife Service.   Cobbler Creek was declared a recreation park on the 26th October 1989.

Cobbler Creek Recreation Park is administered and maintained jointly by the City of Salisbury, and the Department of Environment, Water and Natural Resources.  A volunteer group, Friends of Cobbler Creek, was formed in 1990 and works with rangers to improve and maintain the park. 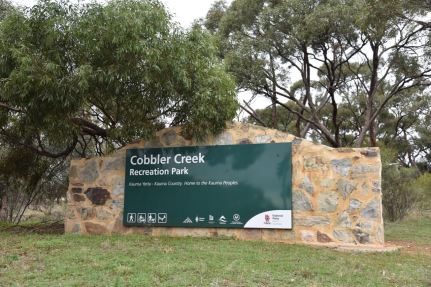 Cobbler Creek Recreation Park sits in the traditional lands of the Kaurna aboriginal people.  One of the first European settlers in the area was William Pedler III (b. 1804.  d. 1874) who emigrated to Australia in 1838 aboard the Royal Admiral from Cornwall in England with his wife Elizabeth Pedler nee Nicholls.  The couple and their children initially lived in Carrington Street in the city of Adelaide.

In 1850 Pedler purchased 135 acres of land in the Hundred of Yatala in the vicinity of the Old Spot Hotel on the Little Para River.  He later sold the majority of this land an purchased adjoining land comprising around 269 acres east of Bridge Road near Cobblers Creek.  He established his farm ‘Trevolsa‘ of around 279 acres.  Pedler was a shoe maker (cobbler) by profession.  He made and sold shoes to teamsters passing through the Salisbury area who were carting ore to Burra in the Mid North of South Australia.  It is his profession that gave both the creek that passes through the northern part of the park, and the park their names.

Above:- Memorial plaque in the park at the site of the old Trevalsa homestead.

Pedler subsequently passed the land on to his oldest son, William IV Pedler (b. 1829.  d. 1909), who farmed the land for many years with his wife Martha and their family.  In 1852 he travelled to the Victorian goldfields and returned home after some success.  But he soon headed back to the goldfields where after working the Eaglehawk area, he returned home at the end of 1852 to work on the family farm Trevolsa.

Also located in the park are Teakle Ruins which sit on the top of Cobbler Hill.  The property is named after its former occupants who vacated the farmhouse around 1900.

Above:- Teakle Ruins.  Courtesy of wikipedia.

In the 19th century, Salisbury residents used this area for Sunday school picnics. Swings were temporarily built, water and food brought to the site and games and bands provided for entertainment.

Many sections of Cobbler Creek have been cleared of native vegetation due to previous land use.  However other sections of the park feature grassland, river red gum, and mallee box.  The park contains some of the last remaining mallee box grassy woodland in Adelaide.  Amongst the woodlands, plants like the blue-flowering flax lily are common. 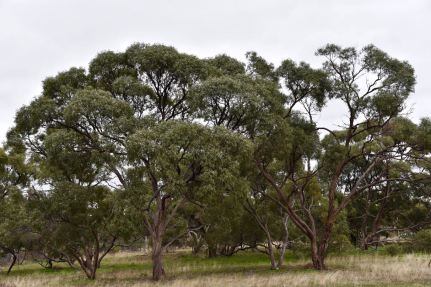 Native fauna species found in the park include Western Grey Kangaroos and Brush tailed possums.  Reptile inhabitants of the park include Eastern bearded dragons, White’s skink, eastern brown snake, and sleepy lizard.  The park is home to a small population of the worm-like and vulnerable Flinders Ranges worm-lizard.

There are several walking trails through the park, along with dedicated mountain bike areas, BBQ areas and playground.

Marija and I entered the park via Smith Road off Bridge Road.  There is a large amount of carparking here.  We parked the vehicle and walked a short distance and set up.  We ran the Yaesu FT-897 for this activation, along with the 20/40/80m linked dipole, inverted vee, supported on the 7m telescopic squid pole.

Above:- Aerial shot of the park showing our operating spot in the western section of the park.  Image courtesy of Location SA Map Viewer.

After setting up I turned on the Yaesu FT-897 which was already sitting on 14.310 on the 20m band.  And our worse fears were realised, with strength 8 noise due to all of the surrounding houses.  Mark VK4SMA/p was calling CQ on 14.310 from the Venman Bushland National Park VKFF-0507.  Fortunately Mark was above the noise floor, and was my first contact from Cobbler Creek.

Marija and I then lowered the squid pole and inserted the links on the 20/40/80m linked dipole so we could operated on the 40m band.  We found 7.144 and I started calling CQ while Marija spotted me on parksnpeaks and Facebook.  First in the log following my CQ call was Brett VK2VW, followed by Geoff VK3SQ, and then Cliff VK2NP.  Sadly we were experiencing strength 8 noise on 40m as well.

Within 10 minutes I had contact number ten in the log, thus qualifying the park for the VKFF program.  Contact number 10 was Andrew VK5MR at Roxby Downs in the north of South Australia. 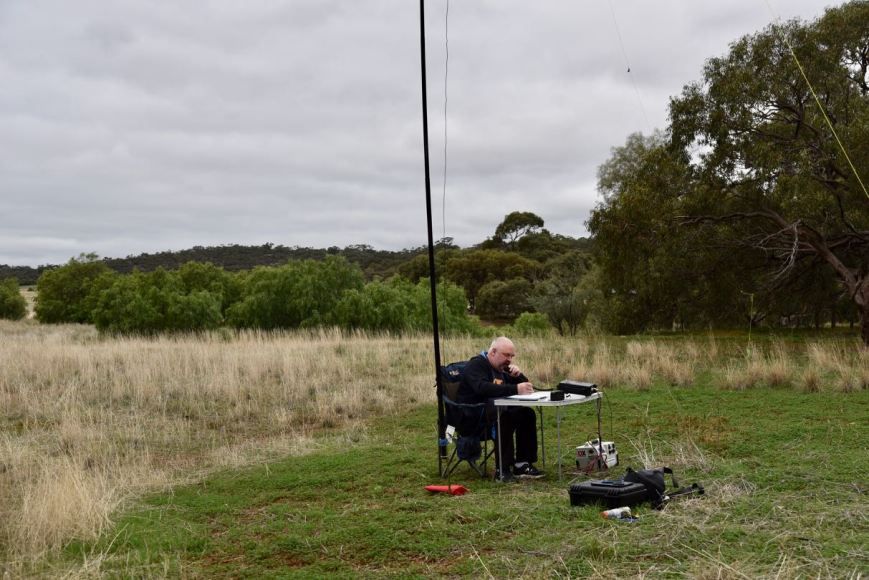 Above:- the shack for the afternoon

I perservered under some pretty trying and frustrating conditions.  It was extremely difficult to pull out anybody below strength 7-8.  And we knew there were a lot of stations calling us that fell into that category.  We were also right under the flight path of the light aircraft using the nearby Parafield Airport, and we had the occasional loud V8 car on the nearby Main North Road.  Sadly I missed out on a contact with Ron VK3AFW/p who was on Lord Howe Island.  People told me Ron was calling, but I just wasn’t able to hear Ron well enough to exchange signal reports with him.

Much to my surprise I reached 44 contacts within 45 minutes, qualifying the park for the global WWFF program.  Contacts were made into VK2, VK3, VK4, VK5, VK7 and New Zealand.  This including a Park to Park with Neil VK4HNS/p who was activating the Homevale National Park VKFF-0237.  It was also nice to log Andre ZL1TM who has become a regular park hunter.

Whilst on air I had a number of interested onlookers, and Marija took the time to explain to them the hobby of amateur radio and what we were doing.

Above:- light aircraft flying above us from the nearby Parafield Airport.

I now had 47 contacts in the log on 40m.  So we lowered the squid pole and inserted the links for the 80m section of the antenna and headed to 3.610 where I called CQ.  This was answered by Adrian VK5FANA on the Yorke Peninsula with a booming signal.  As I had qualified the park, it was now Marija’s turn to jump into the operators chair.  Marija logged Adrian after we had lowered the power down from 40 watts to 10 watts PEP for Marija’s Foundation class licence.

Following her contact with Adrian, Marija logged a further 8 stations on 80m from VK3 and VK5.  Sadly our noise floor on 80m was also strength 8.  Marija then headed back to 40m and worked Gerard VK2IO for her 10th contact, qualifying the park for VKFF.  Gerard had tried calling us on 80m but he was below our noise floor. 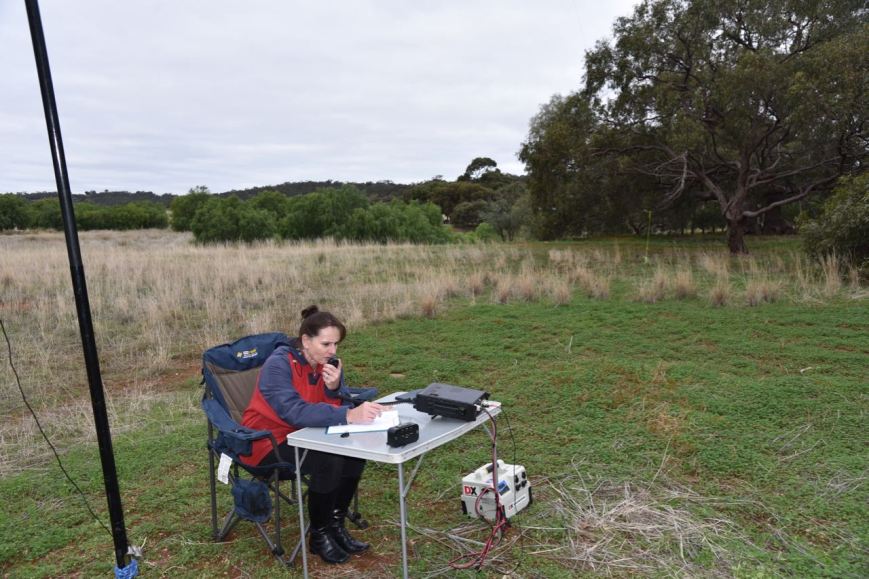 Above:- Marija VK5FMAZ on air, battling the strength 8 noise floor.

So after about 90 minutes in the park, Marija and I had a total of 80 contacts in the log between us, including 5 Park to Park contacts.  Unfortunately we had missed out on the contact with Ron on Lord Howe Island, and a number of other stations that were below our noise floor.  I think the next activation of this park will be a hike in by a few km to get away from the nearby houses.