During 2014 I conducted a total of 18 SOTA activations.  These were all in South Australia, except for 2 special activations in Germany and Belgium during our trip to Europe.

Some of the highlights on 2013 for SOTA were receiving the following certificates:- 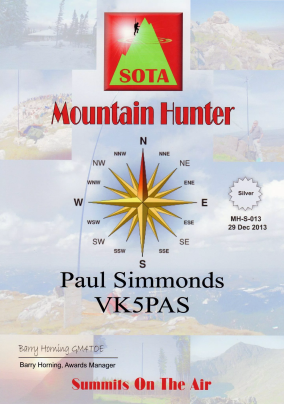 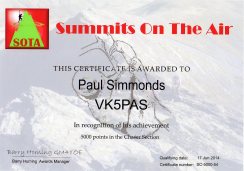 Above:- with Larry VK5LY (now SK) in the Belair National Park.

In March 2013 I ran the VK5 SOTA & Parks symposium which was held at the Guides Hall at Blackwood adjacent to the AHARS Shack.  A total of 32 amateurs attended and listened in to some interesting presentations including the following:-

In March I took part in the John Moyle Memorial Field Day, from the top of Mount Barker summit.  I made a total of 155 contacts in the 6 hour portable section and came in 1st place. 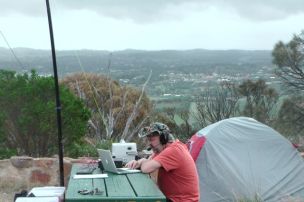 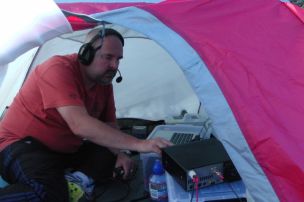 Early April 2014 saw the 1st year anniversary activation weekend for the VK5 National & Conservation Parks Award.  A total of 29 hams participated in a total of 98 park activations.  Of those, 84 were unique parks.  Over 2,300 QSO’s were made, and this included over 750 park to park contacts.  I headed to the Fleurieu Peninsula and activated the following parks:-

Above:- On the beach at Waitpinga in the Newland Head Conservation Park.

Also in April was the PR4Amateur radio event.  Myself and a number of amateurs from the Adelaide Hills Amateur Radio Society set up a display at the Belair National Park.

During 2014 I received a number of global WWFF certificates which included the following:- 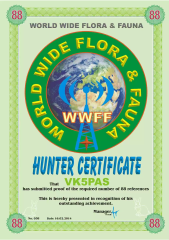 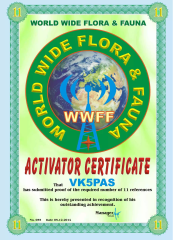 In June 2014 John VK5BJE and I held an introduction day to SOTA & the Parks awards, with a planned SOTA activation at Mount Lofty, followed by a parks activation at Belair National Park.  A total of 13 amateurs took part.  For many, it was their first portable outing. 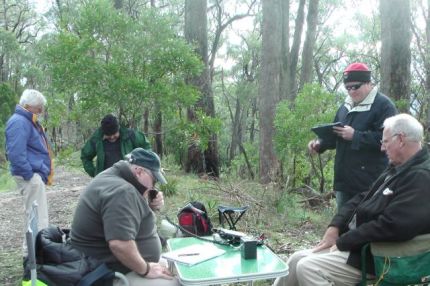 A few weeks later I travelled down to Mount Gambier for the South East Radio Group’s annual convention.  Whilst there I activated a number of parks, 14 in fact, and also Mount Burr summit, making a total of 472 QSOs.  On the Sunday evening I delivered a presentation on the VK5 Parks Award to around 80 people at the convention, and then enjoyed the annual Sunday night dinner.  A great event. 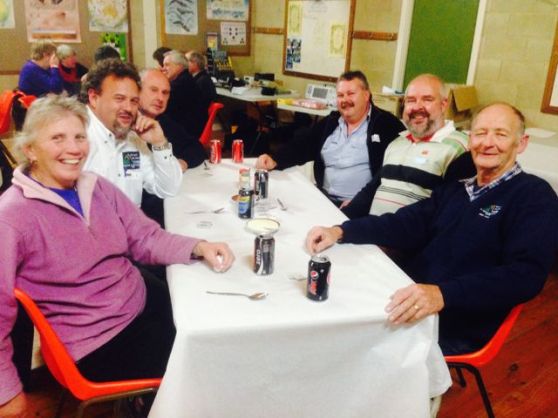 In July Marija and I flew to Paris and spend around 2 months in Europe.  This included some time in Belgium where my very good mate Marnix OP7M and his lovely wife Martine and son Goan, were kind enough to allow us to stay and thoroughly looked after us.  I have also become good mates with Marnix’ good buddy, Eddy ON6ZV.  Whilst staying with Marnix we did a SOTA/Parks activation in Belgium, and a SOTA/Parks activation in Germany, using the special call sign of ON4IPA (International Police Association).  Because of reciprocal licensing issues, I was not able to operate under my own call sign. 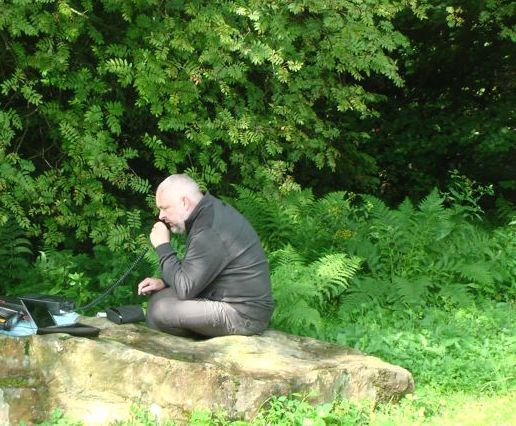 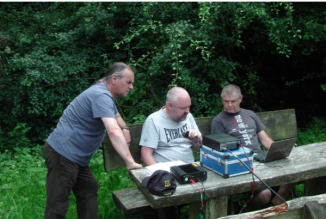 In November I organised the ‘Welcome to amateur Radio’ symposium which was held at Blackwood.  A total of 80 amateurs attended the symposium which featured 16 presentations. 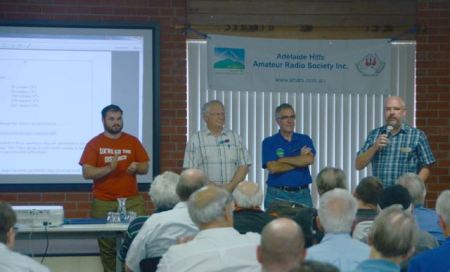 Also in November, was the annual KRMNPA Activation Weekend.  This year the KRMNPA weekend also conincided with the 2014 Summits on the Air (SOTA) Spring Activation weekend.  I again travelled over the border and activated 6 Victorian National Parks, and 4 SOTA peaks.  I made a total of 473 contacts.

Later in the year I received the KRMNPA Merit Award and plaque, which is issued for having worked all 45 Victorian National Parks. Above:- at the display table, with a visitor Rob VK5RG

The year 2014 continued to be a great year chasing overseas SOTA & Parks activators, with some terrific openings on 20m on both the long and short paths.

Other awards chased during the year included the German Mountain Activity Award, UK & Ireland WWFF, & Poland (SPFF) and many more.

I also received a special certificate in the mail from Andrew VK1AD (formerly VK1NAM). 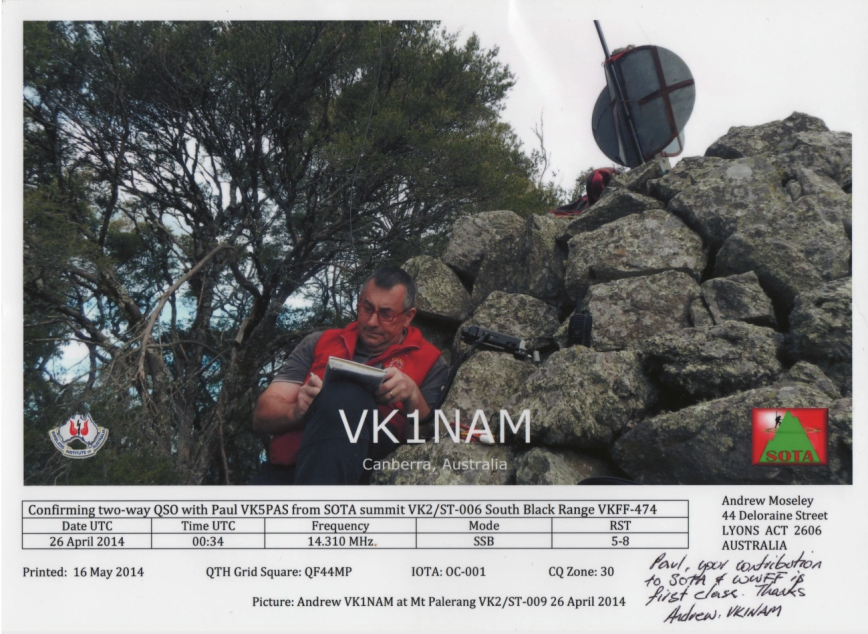 In November 2014 I commenced the Out and About in VK5 newsletter, which focussed on portable activities in VK5.  Sadly due to a lack of VK5 contributors, the newsletter ceased in early 2018, despite having many interstate and overseas readers.

My first ever SOTA activation took place in 2013.  I activated Black Bullock Hill VK5/ SE-016 south of Adelaide in March 2013 and logged 7 stations running QRP 5 watts from the Yaesu FT-817nd.  My antenna was a Chinese version of the Buddistick, which didn’t last long.  It was soon discarded for a linked dipole. 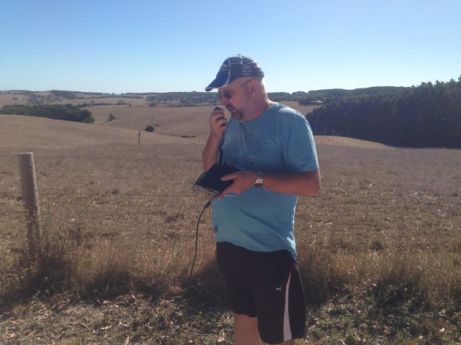 Above:- my first ever SOTA activation at VK5/ SE-016 on the Fleurieu Peninsula, south of Adelaide.

I was bitten by the SOTA bug and went on to activate 53 summits in 2013.  Most of these were in the Mid North and West Coast regions of South Australia, but I also activated 13 summits in Victoria.  A number of these summits were joint activations with Ian VK5CZ. 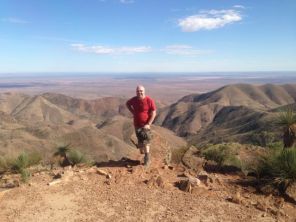 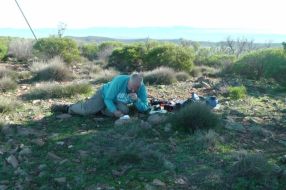 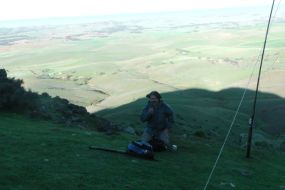 In April 2013 I undertook my first ever park activation, at the Belair National Park, for the World Wide Flora Fauna program.  I had kicked off the VKFF program in Australia the month before in March.  I had also initiated the VK5 National & Conservation Parks Award.  These were early days of the parks award, and knowledge and popularity of the programs was far less than it is today.  My first every park, Belair, resulted in 11 contacts in the log after some time in the park.  Nowadays I am normally reaching at least 44 contacts, even in the middle of the week, and in a very short period of time.

In June 2013 I became a Shack Sloth in the SOTA program, reaching 1,000 points as a SOTA chaser.  My Shack Sloth certificate and glass plaque feature on the wall of my shack. 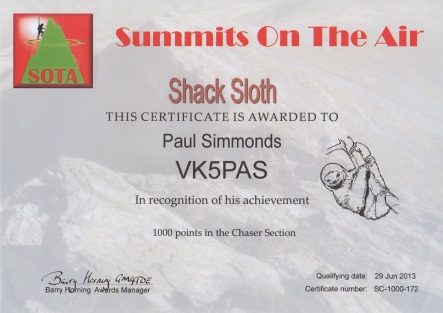 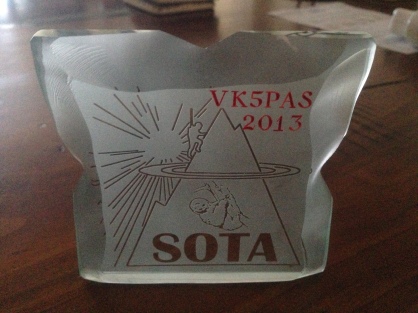 Later that year in August I received my SOTA activator certificate, having reached 100 activator points.  And all of those contacts were made QRP 5 watts with the Yaesu FT-817nd.   My 100 points came during an activation of Hogshead Hill VK5/ NE-051, and a QSO with Ron VK3AFW.

A little later in the year I reached 250 Summit to Summit points.  I was operating from Mount Rouse VK3/ VS-048 and made contact with Glenn VK3YY/p who was activating Federation Range VK3/ VN-003. 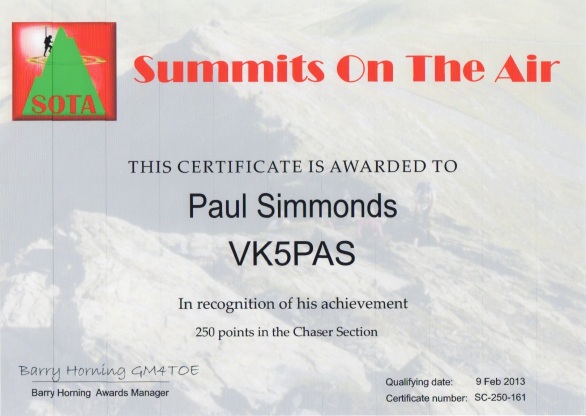 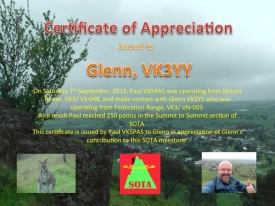 In October of 2013, the SOTA program in VK5 celebrated its 1st birthday.  I headed down to Black Bullock Hill VK5/ SE-016 where I made 49 contacts. 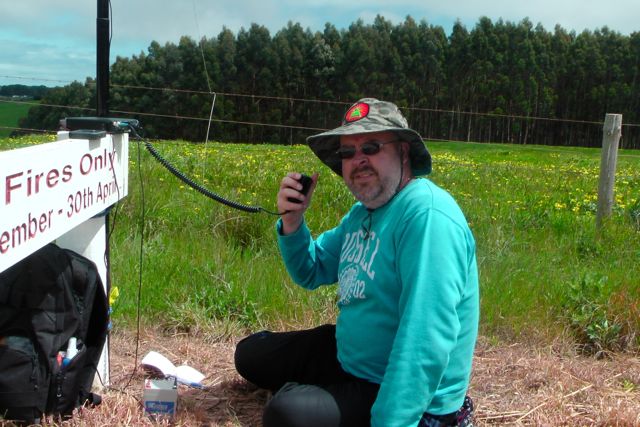 A few weeks later I attended the SOA VK5 First year anniversary lunch, which I had arranged at a hotel at Gawler.  There were 8 attendees: Ian VK5CZ, John Vk5BJE, Larry VK5LY, Andy VK5LA, Andy VK5AKH, Keith VK5OQ, Mike VK5MCB, and myself. 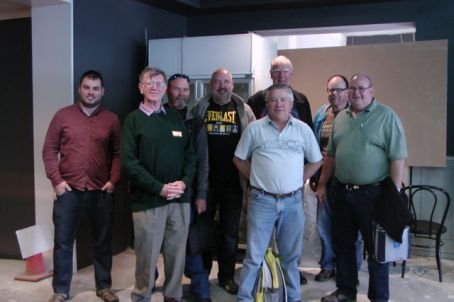 The group at the gathering 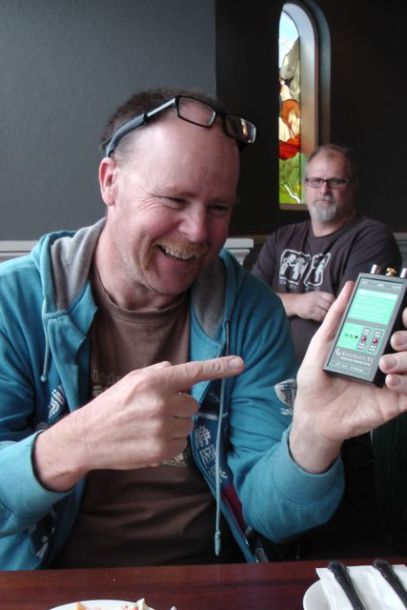 Andy VK5LA with his Elecraft tuner 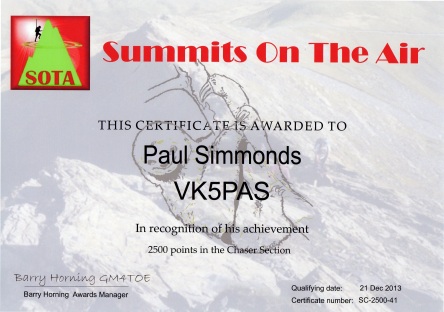 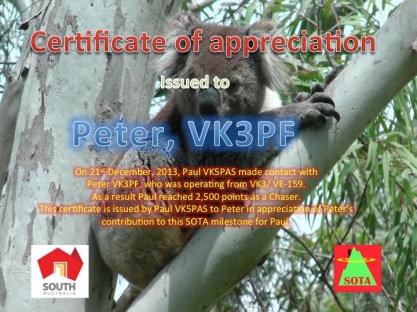 During 2013 I conducted 78 activations for the VK5 Parks Award and 14 for WWFF.  One of the highlights of the year was to activate Bulyong Island in the Murray River National Park with my 2 good mates Larry VK5LY (now silent key) and Ivan VK5HS.  To get there we had to travel via boat.  In 2013 I also activated my first park for the Keith Roget Memorial National Parks Award, that being the Grampians National Park in western Victoria.

Above:- Activation of the Murray River National Park with Larry VK5LY (SK) and Ivan VK5HS in September 2013.

For the 6 month anniversary of the VK5 Parks Award, Marija and I travelled to the Yorke Peninsula where a number of parks were activated.

In November 2013 the KRMNPA Activation Weekend took place.  I travelled to Victoria with Marija where we activated the Murray Sunset National Park and the Wyperfeld National Park.  I made a total of 63 contacts and worked a total of 16 different Victorian National Parks over the duration of the weekend.  Marija and I also caught up with Larry VK5LY (now a silent key) and his wife Di, as they were activating nearby parks. 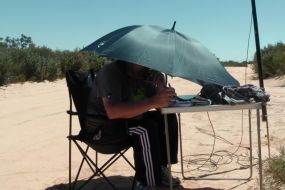 During 2013 I also activated Granite Island for the Islands on the Air (IOTA) program.  Unlike the serious IOTA activators, this was a very laid back and simple activation, running just 5 watts from the Yaesu FT-817nd.

Above:- My activating spot on Granite Island OC-228

Above:- Socialising with hams in the Riverland, where I had delivered a presentation in September on the parks awards. 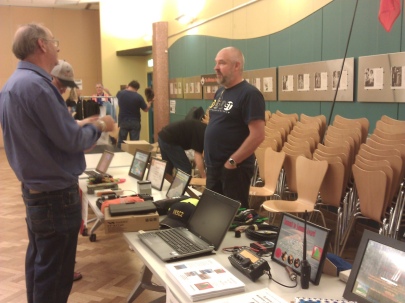 At the AHARS Buy & Sell

At the Port Elliott Agricultural Show

I was fortunate in 2013 to make numerous contacts with SOTA & Parks activators from overseas.  Band conditions were much better than they are today.  I also chased a few other portable awards including the Summitsbase awards. 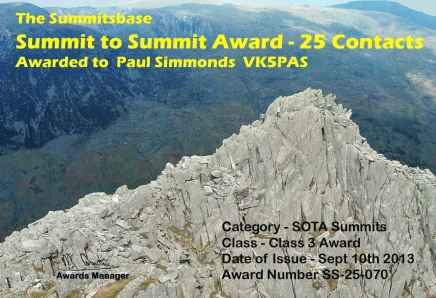 Somebody asked me the other day “how many parks have you activated?”  I really didn’t know the answer, so over the past few week I have sat down and tallied up my stats for my park activations for the VK5 National & Conservation Parks Award, World Wide Flora & Fauna (WWFF), and the Keith Roget Memorial National Parks Award (KRMNPA). And also the number of summits I have activated for the Summits on the Air (SOTA) program.

Below are the number of activations I have undertaken (since March 2013)…..

Many parks and summits I have activated 5 or 6 times over.

In the following posts I will record some statistics and highlights for each year since I started operating portable in March 2013.