Marija and I were on the road by about 7.15 a.m. on Saturday morning (6th April 2019) and were on our way to the 2019 BRL Gathering at the historic Overland Corner Hotel.  The day was to kick off at about 7.30 a.m. with a cooked breakfast, and concluding at about 2.30 p.m. following some presentations.

It was about a 44 km drive from Renmark out to Overland Corner, along the Sturt and Goyder Highways.

Above:- Route from Renmark to Overland Corner.  Map courtesy of google maps.

The Overland Corner Hotel is located about 21 km from Barmera, and is situated off the Goyder Highway.  It is the oldest structure to remain standing in the area and is set amongst a beautiful lawned area with plenty of shade.

Above:- The Overland Corner Hotel.

The hotel was originally established as a watering hole for drovers and overlanders operating between New South Wales and Adelaide in the colony of South Australia.  It also served as a temporary camping ground for steamers passing through the area along the mighty Murray River, about 600 feet from the hotel.  The hotel was erected in 1859 and since that time has served as a staging point, a general store, a police station and a local Post Office.

The hotel was originally established as a watering hole for drovers and overlanders operating between New South Wales and Adelaide in the colony of South Australia.  It also served as a temporary camping ground for steamers passing through the area along the mighty Murray River, about 600 feet from the hotel.  The hotel was erected in 1859 and since that time has served as a staging point, a general store, a police station and a local Post Office.

After saying g’day to everyone upon our arrival, we enjoyed a bacon and egg sandwich, which was prepared by Ivan VK5HS who was hard at work at the BBQ.  Also a nice warm coffee.

Above:- Ivan VK5HS cooking up breakfast

Steve VK5SFA was to be one of the guest speakers of the day and was certainly a popular man, explaining his loop antennas to many an interested onlooker.

One of Steve’s TMLA antennas

This is a great gathering to catch up with radio mates in a terrific social environment.

Mid-morning, Steve VK5SFA delivered a presentation on loop antennas.  In 2018 Steve won the ARRL antenna competition.  The criteria for 2017 called for compact designs for those with space restrictions.  Congratulations Steve.  I have heard Steve’s presentation a few times now, and it never ceases to amaze me of his ability.

After a short break, Grant VK5GR then delivered a presentation on his involvement in the Islands on the Air (IOTA) program.  Grant has operated from a number of Pacific islands including Niue and Vanuatu and is about to embark on a trip to Tonga.  A very interesting presentation which gave an invaluable insight into just how much work goes into such DXpeditions.

It was now about lunchtime, with lunch served from the hotel.  I had a very nice chicken schnitzel parmigiana and a few ciders.  The raffle was also drawn, and a number of people were the lucky recipients of various prizes.

A group photograph was then taken of all in attendance. 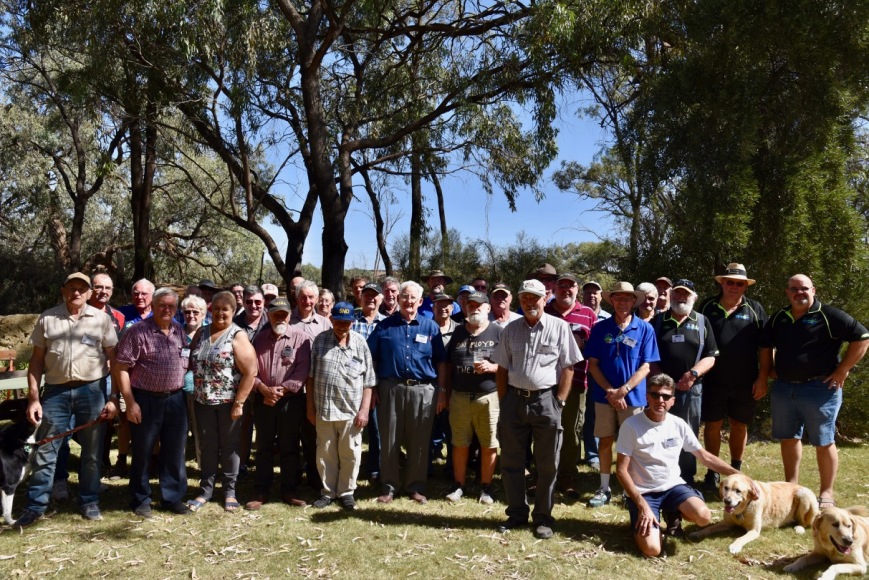 Above:- Group photograph of those in attendance at Overland Corner.

A homebrew competition took place this year, with a number of people entering various equipment including antennas and tuners.

A number of presentations then took place, with trophies and other goodies being presented.  The Riverland Radio Group kindly gave Marija a bottle of wine, a RRG mug, and some coated almonds for her assistance in taking photographs at the event.  I was also given the same for my continued promotion and attendance of the event and my involvement in the VK5 Parks Award.  It was greatly appreciated and certainly came as a pleasant surprise.

The day officially wrapped up at around 2.30 p.m.  It was the end of another highly successful BRL Gathering.  We had the remainder of the afternoon to ourselves prior to the evening meal at the Mallee Fowl Restaurant.

For just a small radio club, the Riverland Radio Club are certainly boxing above their weight.