Our fourth park for Saturday 3rd August 2019 was the Nhill Swamp Wildlife Reserve VKFF-2412.  The park is located on the southern side of the town of Nhill in western Victoria, about 376 km north-west of the city of Melbourne.

This was to be the first time that the park had been activated for WWFF/VKFF.

Above:- Map showing the location of the Nhill Swamp Wildlife Reserve.  Map courtesy of Protected Planet.

After leaving Boyeo we travelled south-east on the Nhill-Yanac Road and soon reached the town of Nhill.  “Nhill” is believed to be a Wergaia aboriginal word meaning “early morning mist rising over water” or “white mist rising from the water”.

Marija and I initially headed to the northwestern part of the park just to the rear of the Jaypex park.  There are a few interesting things to see here including the John Shaw Neilson memorial cottage.  This was the birthplace of the lyric poet, John Shaw Neilson (1872-1942).  He was largely untrained and only had a basic education, but became one of Australia’s finest lyric poets.  The cottage was relocated from Penola in South Australia to Nhill. 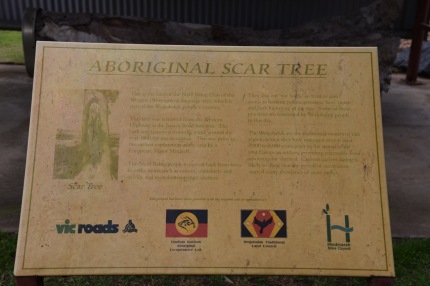 There is also an information board about the endangered Malleefowl which can be found in parks in western Victoria. 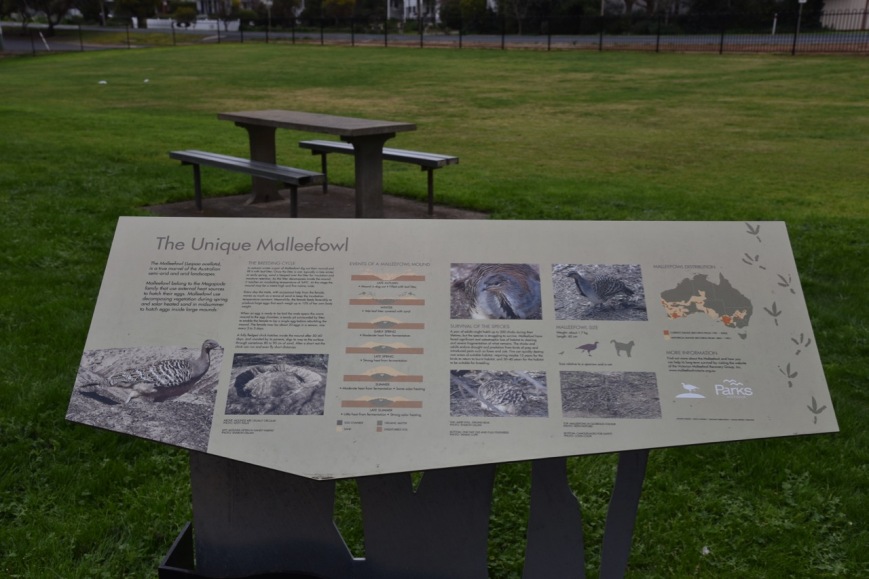 There are a number of information boards here about the park and a boardwalk which takes you through the swamp.

The boardwalk was originally constructed in 1996, but was closed in 2012 due to public safety concerns.  To their credit, the Nhill community rallied to rebuild the boardwalk.  A Boardwalk Committee was formed to advocate for a community-led refurbishment.  Following two years of fundraising by the Rotary Club Nhill and the Lowan Lodge of Freemasons Nhill, the prospect of a new boardwalk was in sight.  Remaining funds were secured with generous contributions from Freemasons Victoria, the Victorian Government and Parks Victoria.  Refurbishment works commenced in 2014 and works were completed in June 2015. 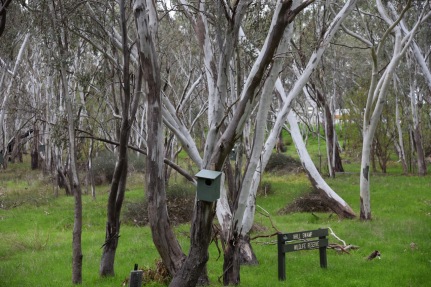 Adjacent to the park is Nhill Lake.  This was the site of a traditional aboriginal Corroboree Ground where aboriginal people would meet and perform ceremonies, consisting of traditional songs, dances, weddings, trading and celebrations.  A meeting between aboriginal people and the first squatters Dugald Macpherson and George Belcher took place here on 4th January 1845.

In 1879 brothers Frank and John Oliver obtained a licence to build a flour mill on a 3-acre site around the northwestern edge of the swamp.  Within months land was surveyed for the township of Nhill.  With its water for horses, on the inland route from Adelaide to Melbourne, Nhill earned its place as a stop on the Cobb and Co coach route.

During our visit to the park, it was alive with birdlife.  I took the photographs below of a pair of Red-rumped Parrots and an Australian Owlet Nightjar, the smallest of the nocturnal birds found in Australia.

Marija and I decided to drive around to the southern side of the park on the Nhill-Harrow Road, opposite the Nhill racecourse.  The park is signposted here and we found a 4WD track which led right into the park.

We drove a short distance down the track and set up.  We ran the Yaesu FT-857d and the 20/40/80m linked dipole for this activation. Above:- An aerial shot of the park showing our operating spot.  Image courtesy of Protected Planet.

I called CQ on 7.144 which was answered very quickly by Grant VK2LX with his usual big signal and great audio, followed by Scott VK4CZ with an equally big signal, and then regular park hunter John VK4TJ.  It took me just 4 minutes to qualify the park for VKFF, with contact number ten being with Ray VK4DXA.  One of those callers was Max IK1GPG in Italy who was 5/7 and gave me a 5/5 signal report into Europe.

As we were running short of time Marija and I decided that I would push through and get my 44 contacts to qualify the park for the global WWFF program, and Marija would then come on air to get her 10 for VKFF.  Just 45 minutes into the activation and I had my 44th QSO in the log, a contact with Danny VK2ARO.

I had made contacts into VK1, VK2, VK4, VK7, VK8, New Zealand, Italy and the Canary Islands.  I was very happy to log Juan EA8YT in Tenerife in the Canary Islands off the north-western coast of Africa.  What was noticeable was the lack of VK3’s and VK5’s in the log due to the lack of close-in propagation. 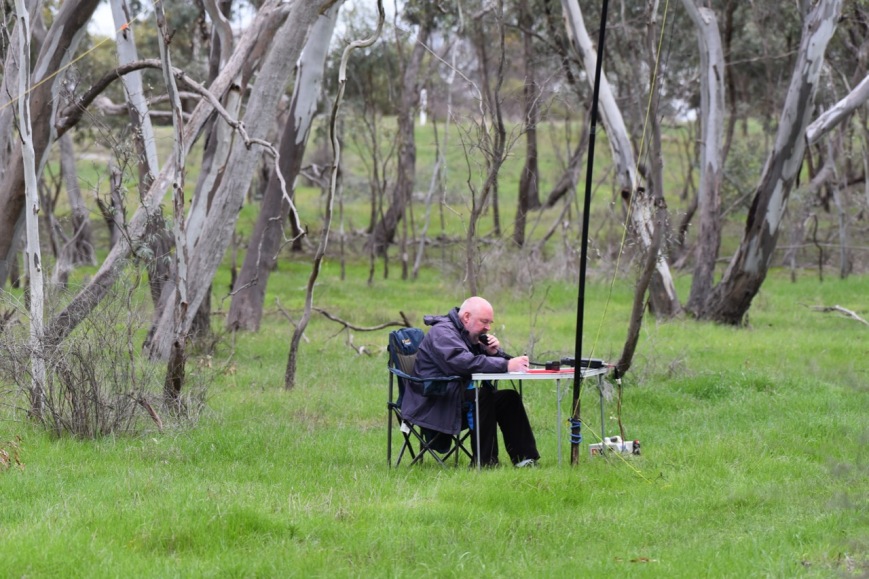 Marija then jumped onto the mic and also very quickly qualified the park for VKFF.  Her first contact was with Jim VK2FADV, followed by Adam VK2YK, and then Fred VK4FE.  Contact number ten was with Ray VK4NH.

Marija logged a total of 18 stations from VK2, VK4, and VK7, before I jumped back into the operator’s chair and called CQ on 3.615.  Conditions were excellent on 80m into VK3 and VK5, with a total of 15 stations logged.

It was just after 5.30 p.m. local time and we hoped to squeeze in one more park, and still had to get back to Bordertown, so we packed up and hit the road.