Marija and I hit the road on Sunday morning (4th August 2019) at around 8.30 a.m. local time and headed down the main street of Bordertown for a morning coffee.  We then filled up with diesel and had a look at a few of the local attractions.

The first was the childhood home of former Australian Prime Minister (PM) Robert James Lee ‘Bob’ Hawke.  He was the Australian PM from 1983 to 1990.  Hawke was born on the 9th December 1929 in Bordertown and lived in the town until 1935.  The building was built by the National Bank in 1884 and conducted business there until the branch closed in June 1885.  It was purchased by the Congregational Church as a manse in 1897.  Clem A Hawke was the Minister from 1928 to 1935.  It ceased to be a manse in 1976. 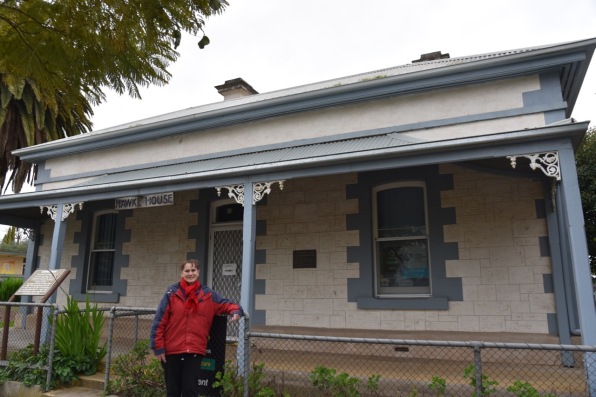 Bordertown is also famous for its white kangaroos which can be seen at the Bordertown Wildlife Park.  A mob of White Kangaroos that are a genetic strain of the Western Grey can be seen in the park.

We then left Bordertown and drove over the South Australian/Victorian State border into VK3 for our first park of the day, the Yarrangook Flora and Fauna Reserve VKFF-2497.

The park is located about 58 km north-west of the town of Kaniva. 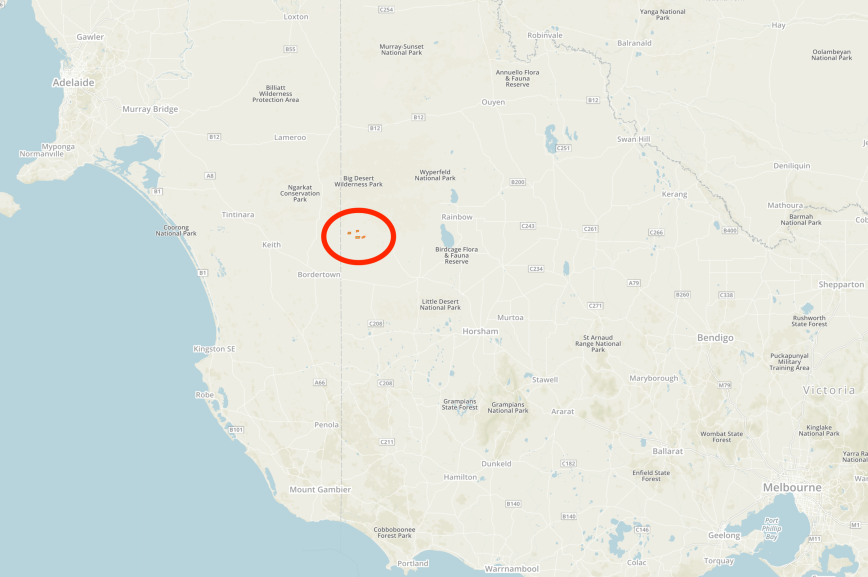 Above:- Map showing the location of the Yarrangook Flora & Fauna Reserve in western Victoria.  Map courtesy of Protected Planet.

Just after crossing the State border we turned left onto the Serviceton North-Telopea Downs Road and headed north.  This road runs parallel to the State border.  The road is sealed for a number of km but then turns to dirt and becomes Taylors Road. 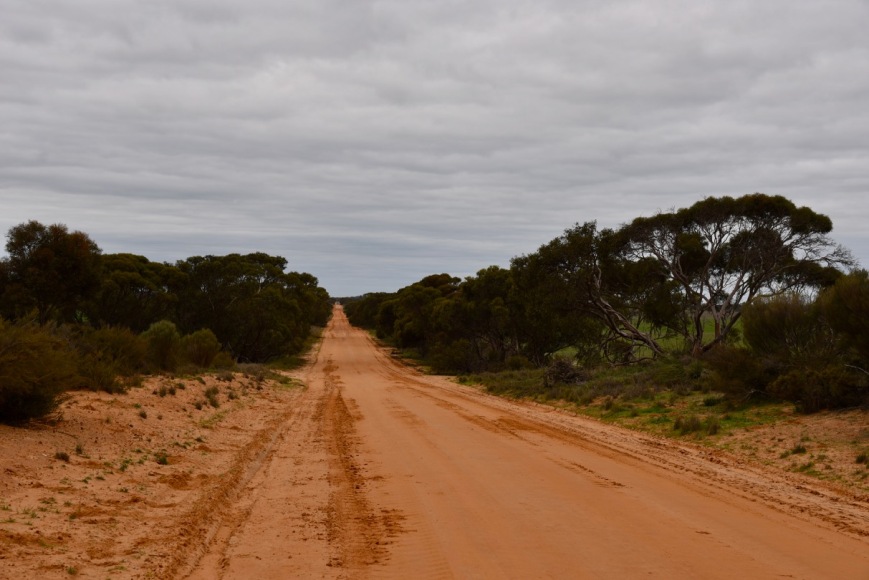 We continued along Taylors Road and about 44 km after leaving the Wimmera Highway we reached the southwestern corner of the Yarrangook Flora & Fauna Reserve which is well signposted.

The Yarrangook Flora and Fauna Reserve is 1,525 hectares in size and consists of five areas of undisturbed mallee-broom bush scrub.  The westernmost section is located on Taylors Road about 44 km north of the Western Highway.  Two other sections are located on Chappel Road.  While the two eastern sections of the park are located on Murrawong North Road.

Above:- The five sections of the Yarrangook Flora and Fauna Reserve.  Map courtesy of Protected Planet.

The name Yarrangook comes from the aboriginal words yarran meaning acacia, and ook meaning water.  Thus acacia growing by water.  The mallee—broom bush vegetation in the park is interspersed with areas of open heath and brown stringybark scrub. 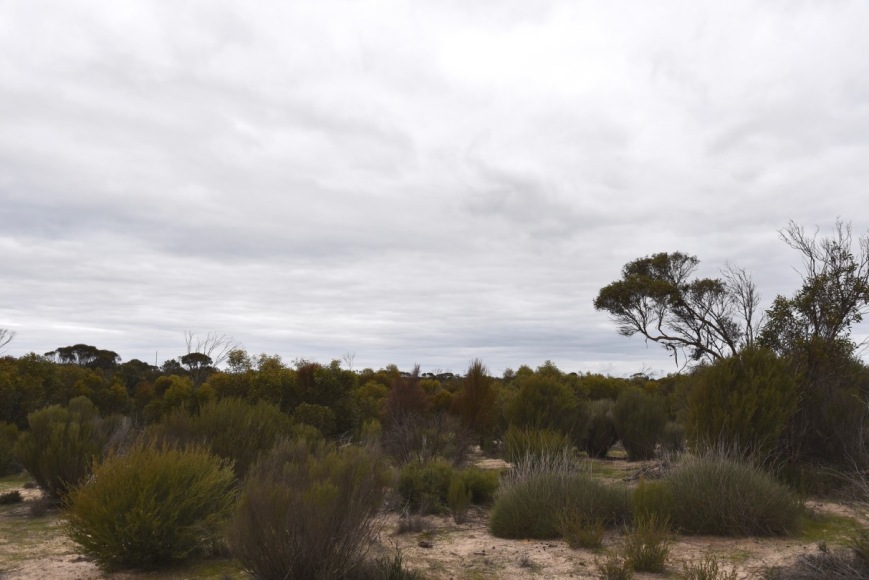 The park provides an important refuge for the Australian Bustard, a large ground bird which is often referred to as the Plains Turkey or Bush Turkey.  The male is up to 1.2 metres tall with a 2.3-metre wingspan.  Unfortunately, we did not see any during our visit to the park. 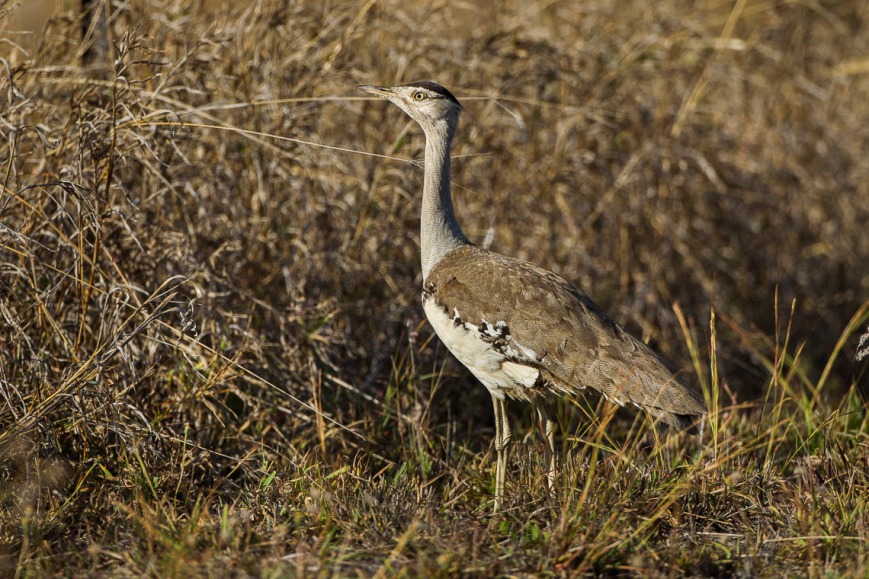 Above:- the Australian Bustard.  Image courtesy of wikipedia.

The park is surrounded by cleared farming land.

We found a gate to a paddock on the western side of Taylors Road and parked the 4WD there and carried the gear across the road to the park.  We set up in a small clearing in amongst the scrub.

Above:- An aerial shot of the westernmost section of park and our operating spot.  Image courtesy of Google maps

This was quite a remote location and we had internet coverage in the park so we were unable to place a self spot up on parksnpeaks.  The 40m band was busy with the broadcasts from the Wireless Institute of Australia, so we were unable to get onto the frequency of 7.144.  I found 7.130 to be clear and started calling CQ hoping that some of the park regulars would find me and then place a spot up for me.

First in the log was Paul VK7PAL, followed by Matt VK3FORD/2, Haucke VK1HW and then Peter VK3ZPF.  I had been lucky.  Peter VK3ZPF who is a regular park hunter and activator and is the VK3 State rep, placed a spot up for me on parksnpeaks.  This resulted in a steady flow of callers.  Thanks Peter.

A few QSOs later I was called by Gerard VK2IO/5 who was activating the Bunkers Conservation Reserve VKFF-1692.  Marija also logged Gerard.  This was a new park for both of us as hunters.

I logged 23 stations on 40m before the callers dried up.  I then called CQ on 3.610, unable to self spot.  Fortunately, John VK4TJ had kept listening on 40m and spotted me on parksnpeaks when I announced that I was moving to 80m.  First, in the log, was Adrian VK5FANA, followed by Gerard VK2IO/5 in the Bunkers Conservation Reserve VKFF-1692 for a second band for both Marija and me.  Conditions were quite good on 80m and I ended up logging a total of 7 stations there from VK3 and VK5.

I had 30 contacts in the log and it was time for Marija to get on the air and qualify the park for VKFF.  We decided to remain on the 80m band.  Marija called CQ and this was answered by David VK5PL, followed by Peter VK3PF, Ken VK2KYO, John VK5BJE, and then Geoff VK3SQ.  But a further 5 minutes of CQ calls went unanswered so we decided to move back to the 40m band, with Marija requiring just 3 more contacts for her 10.

Marija called CQ on 7.144 and this was answered by Peter VK3PF who spotted Marija on parksnpeaks.  Geoff VK3SQ then called in, followed by contact number ten with Ken VK2KYO.  Marija logged a further 3 station before callers once again dried up.

It was an opportune tune to move to the 20m band.  Peter VK3PF kindly placed a spot up for me to advise that I would soon be on 14.310.  Marija and I lowered the squid pole and removed the links for the 20m and then headed for 14.310.  I called CQ and Ray VK4NH responded, followed by John VK4TJ.  Both Ray and John have other callsigns, so 2 contacts became 6.  I then logged Peter VK6RZ with a strong 5/9 signal from across the other side of Australia in Western Australia.

I now had 37 contacts in the log and needed a further 7 to qualify the park for WWFF.  So it was back to 7.144 on the 40m band.  Rob VK4AAC/2 came back to my CQ call, followed by Peter VK2OQ mobile and then Geoff VK3SQ.  Contact 44 followed soon after with Chris VK1CT.

THANK YOU to those who took the time to spot us on either parksnpeaks and/or Facebook.