Today (Tuesday 13th August 2019) I activated four parks.  My intention was to activate the 4 parks and get 10 contacts in each.  These 4 parks would go towards the special South Australia National Parks and Wildlife certificate which is on offer in August 2019 by the VKFF program.

My first park was the Warren Conservation Park 5CP-247 & VKFF-0941.  I have activated and qualified the park previously.

The park is located about 36 km northeast of the city of Adelaide and about 10 km southeast of the town of Williamstown.  It is located in the lower section of the Barossa Valley.

Above:- Map showing the location of the Warren Conservation Park.  Map courtesy of Protected Planet.

The best access to the park is via the Watts Gully trailhead on Watts Gully Road.  There is a small car parking area here and a pedestrian entrance to a boardwalk into the park.  Otherwise, you can hike into the park from other points including the walking track from the nearby Hale Conservation Park or the Tower Track through Mount Crawford Forest. 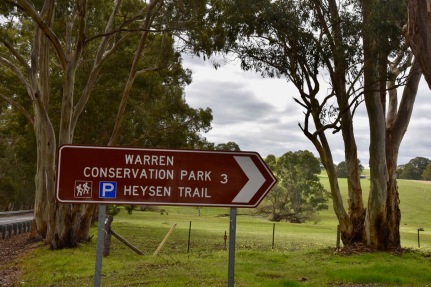 The park is situated in rugged hilly country in the Mount Lofty Ranges.  The major habitat in the park is Woodland with Pink Gum and Long-leaf Box.

The park has four challenging walking trails, including a section of the long-distance Heysen Trail. The tracks are steep and difficult and should be used by experienced bushwalkers only. 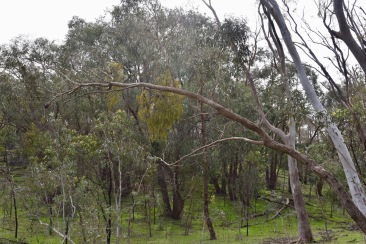 The park first gained protected area status as a wildlife reserve proclaimed under the Crown Lands Act 1929 on the 14th July 1966.  On the 9th November 1967, the land in the wildlife reserve was proclaimed under the National Parks Act 1966 as the Warren National Park.  On the 27th November 1969, section 321 was added to the national park. On the 27th April 1972, the national park was reconstituted as the Warren Conservation Park upon the proclamation of the National Parks and Wildlife Act 1972.   In 1980, it was listed on the now-defunct Register of the National Estate.

The park is named after the Hundred of Warren, which in turn was named in honour of John Warren (1830-1914), who was an Australian pastoralist and politician.

Above:- The Hon. John Warren.  Image courtesy of wikipedia.

There is a wide variety of native animals found in the park including Western Grey kangaroos, koalas, Southern Brown bandicoots, and echidnas.

In 1884, gold was found by John Watts in nearby Watts Gully, near the current day Warren Conservation Park.  In fact, it was Watts Gully Road that I was headed for.  The area yielded gold nuggets as large as 14 ounces.  As a result, Forreston boomed as a little town.  From articles I have read on TROVE, it appears the area’s population swelled, with around 350-400 persons working on the diggings.

I drove along Watts Gully Road and set up just off the boardwalk.  I ran the Yaesu FT-857d, 20 watts, and the 20/40/80m linked dipole for this activation. 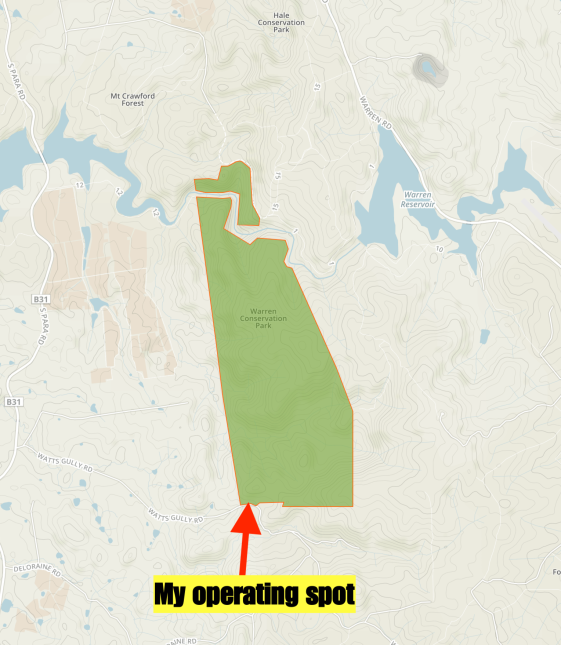 Above:- The Warren Conservation Park showing my operating spot in the southern section of the park.  Image courtesy of Protected Planet.

I commenced calling CQ on 7.144 and this was soon answered by Ian VK3FIAN with a good strong 5/8 signal.  This was followed by a Park to Park contact with Ian VK5CZ/p who was activating the Mokota Conservation Park VKFF-1062 in the mid-north of South Australia.  Peter VK3PF followed, then Terry VK6ATM in Western Australia, and then Owen VK7OR.  Next in the log was Ken VK3UH who kindly spotted me on parksnpeaks.

Within about 13 minutes I had contact number ten in the log, with a QSO with John VK5BJE in the Adelaide Hills.  This was followed by Deryck VK4FDJL/6 who was in the Mangkili Claypan Nature Reserve VKFF-2941.

Band conditions were quite poor, with lots of fading noted on most signals.  Signals from Victorian stations were well down compared to normal.  My last station logged on 40m was Liz VK2XSE/m who kindly placed a spot up for me on parksnpeaks.

With 20 contacts in the log I headed off to the 80m band.  I placed a self spot on parksnpeaks and started calling CQ on 3.610.  Unfortunately, I logged just the two stations: John VK5BJE, and Ian VK5CZ in the Mokota Conservation Park for a second band.

To complete the activation I moved to the 20m band after putting up a spot on parksnpeaks, and called CQ on 14.310.  I logged John VK4TJ, along with his USA and Canadian callsigns. 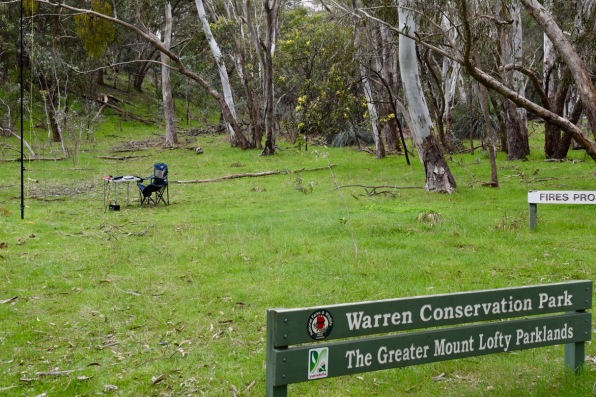 With 25 contacts in the log, including 3 Park to Park contacts, it was time to pack up and head off to my next park, the Hale Conservation Park.