My final park for Tuesday 13th August 2019 was the Sandy Creek Conservation Park 5CP-204 & VKFF-0933.  This is another park which I have previously activated and qualified.

The park is located about 56 km north of the city of Adelaide and about 3 km west of the town of Lyndoch in the southern Barossa Valley. 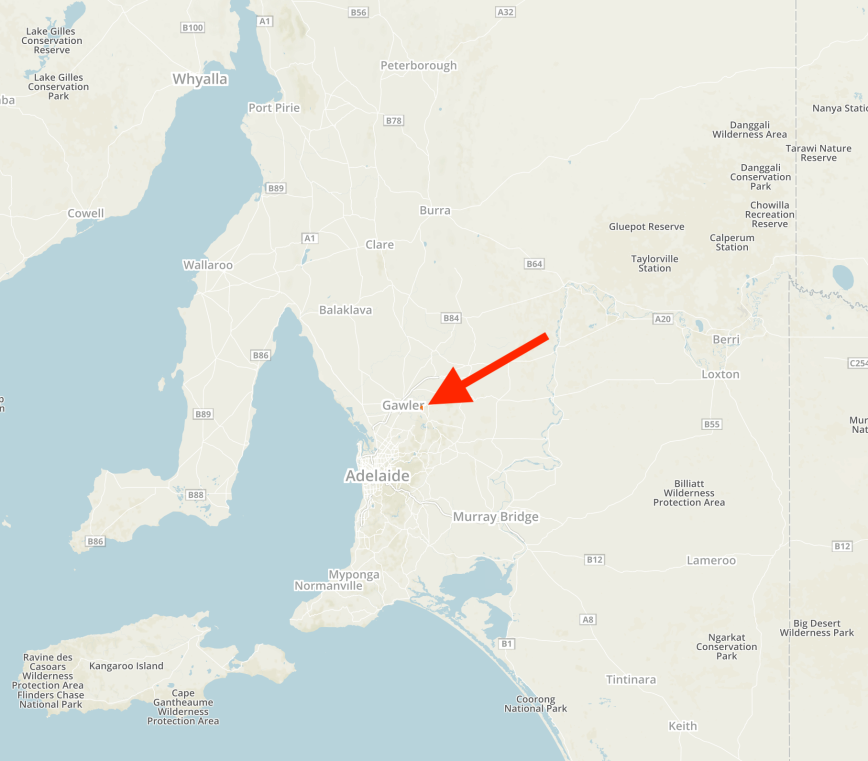 Above:- Map showing the location of the Sandy Creek Conservation Park.  Map courtesy of Protected Planet.

The Sandy Creek Conservation Park is about 142 hectares in size and was established on the 7th day of October 1965.  It is one of the few remaining tracts of undisturbed and undeveloped native bushland in the Barossa Valley.  As a result, it plays a vital role in providing habitat for various native wildlife and birds.  The park is surrounded by sand quarries, cleared farmland and vineyards. Above:- An aerial view of the Sandy Creek CP looking north towards the wine-growing region of the Barossa Valley.  Image courtesy of Google maps.

On the 7th day of October 1965 Section 72 of the Hundred of Barossa was proclaimed as a Wildlife-Reserve.  Further sections of land were added on the 25th day of May 1967 and the park was gazetted as the Sandy Creek National Park.  It was re-proclaimed as Sandy Creek Conservation Park on the 27th day of April 1972.  Further parcels of land were added to the park in 1991, 1994, and 2006.

During the first half of the 1900s much of the Sandy Creek Conservation Park was cleared and planted with vines.  The vineyards were subsequently abandoned due to low soil fertility.  Sections of the park were named after life-long ornithologists and conservationists, Cecil Rix and Mark Bonnin who identified many native bird species in the area.

Cecil Rix was a former Commissioner of the National Parks Commission.   The following is taken from his obituary:-

“One of the many parks that Cecil sought to be dedicated, I must tell you of Sandy Creek in 1962.  It was a nasty hot day with a north wind and Cecil was working in the Barossa area.  He drove down a narrow lane into some shady scrub to east his lunch.  At once he discovered the beautiful bushland to be a haven of numerous species of birds.  A delight for Cecil.  He sought to get Sandy Creek purchased as a Park, but treasury would not provide the money.  At the end of the year, the Minister of Lands, Mr Quirke, officially thanked Cecil on behalf of the Premier Tom Playford for all of his good work during the year.  Cecil, never stuck for a quick reply said; ‘Tell Tom that if he wants to thank me he could buy Sandy Creek land for a national Park’.  Next day, at a meeting of the Cabinet, Mr QUirke passed on Cecil’s words to the Premier.  At 2 p.m. Cecil’s phone rang. The caller said, ‘Quirke here.  We’ve bought your birds.'”

Above:- Plaque in the park to commemorate Cecil Rix.

The Sir Keith Wilson section of the Sandy Creek Conservation Park was a gift from the Wilson family and the Nature Foundation of SA Inc.  Sir Keith Cameron Wilson (3 September 1900 – 28 September 1987) was an Australian lawyer and politician.

The park conserves a rare patch of plains/valley vegetation.  It is dominated by stands of native Southern Cypress-pine and Pink Gum.  Blue Gums and Peppermint Box also provide a canopy to a rich variety of shrubs such as Silver Broom, Guinea Flower and Sticky Hopbush. 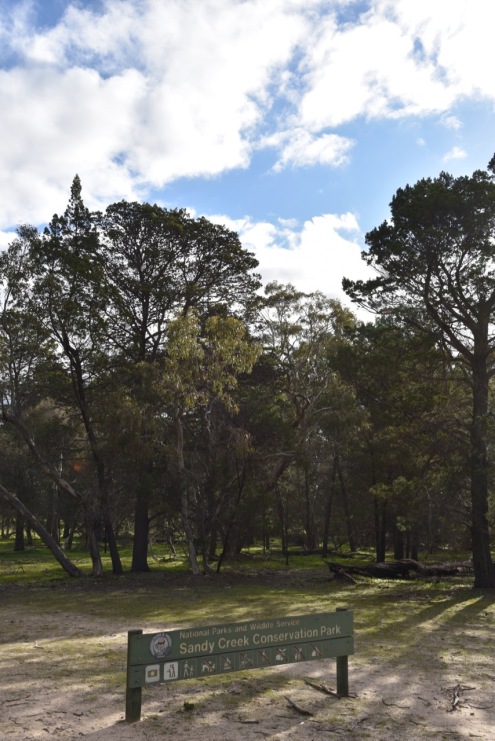 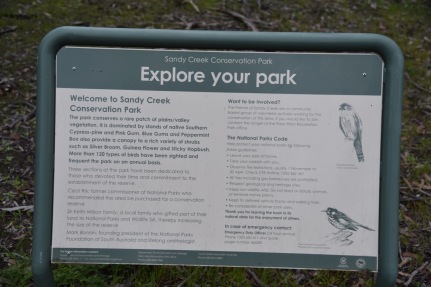 A number of native animals call the park home including Echidnas and Western Grey kangaroos.  The kangaroos were out in force enjoying the afternoon sun during my visit.

I was set up and ready to go by around 0645 UTC, 4.15 p.m. South Australian local time.  It was starting to get a bit cool now with the temperature dropping to around 12 deg C.  The sun was also starting to go down and the 40m band had really opened up to Europe.  As a result, it was quite hard to find a clear spot on the band.

I started calling CQ on 7.145 and it didn’t take long for one of the park regulars to give me a shout.  It was Rick VK4RF/VK4HA with a strong 5/9 signal from Queensland.  Peter Vk3PF was next, followed by Rob VK2MZ and then Glen VK4FARR.

Contact number ten came 7 minutes into the activation.  It was Andrei ZL1TM in New Zealand who is a regular park hunter.  I continued on and eventually logged a total of 20 stations on 40m from VK1, VK2, VK3, VK4, VK5, VK6, VK7, and New Zealand.

I then moved down to the 80m band and started calling CQ on 3.610.  There was quite a little pile up waiting for me.  First in the log on 80m was Lee VK2LEE, followed by John VK5BJE, Adrian VK5FANA, and then John VK5FLEA/p who was activating the Mark Oliphant Conservation Park VKFF-0782.

As it approached 5.30 p.m. local time I made the decision to pack up and head home.  I had qualified the park for VKFF which was my main goal, and I now had 5 South Australian parks activated during the month of August.  This meant that I had qualified for the special National Parks & Wildlife Award.

Megan VK3AAK provided this short piece of audio of me operating…..

As I drove home I was rewarded with a magnificent sunset.