After packing up at Sandy Creek CP and saying see ya later to Andy VK5AKH, I started heading home through the Adelaide Hills.  My wife Marija had told me about another park that I was going to pass on the way home, so I took this as a ‘you have permission to stop in there on the way home‘, which is exactly what I did.

Hale Conservation Park is situated about 60kms north east of Adelaide.  It is located a few kms south of the town of Williamstown.  Access is via the Mount Pleasant Road.  The park has a diverse landscape and steep rocky ridges, and is the home to some of Australia’s more secretive mammals.  It conserves the oyster bay cypress pine. 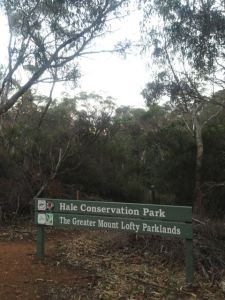 When I first arrived at the park, there were 2 other cars in the carpark.  I think they were 2 young lovers.  But they didn’t hang around for long.  The sight of some fella carrying a squid pole into the bush and the sounds of goats bleating (from SOTA Goat), got the better of them, and off they went to a more quiet location !

I set up the Bandhopper 40m/20m dipole on the 7m squid pole, and used my Yaesu FT-817nd with 5 watts.  There are plenty of trees here so there were no problems with getting the ends of the legs of the dipole up off the ground.

I had a steady flow of ‘hunters’ who responded to my CQ call, and I ended up with 16 QSO’s, all on 40m.  Included one QSO with Lamont in Gisborne in NEW ZEALAND.  Really good conditions between the 2 of us, with 5/8 both ways. 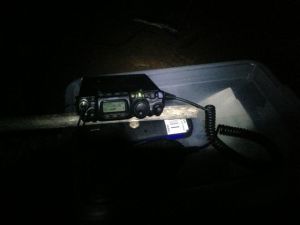 It was a great little spot where I was set up and there was quite a bit of natural lightning, as it was almost a full moon.  But the cold weather got the better of me, and I headed home to the warmth, and spent there remainder of the evening watching the AFL on the TV.