My third and final summit of the Sunday was Ben Nevis, VK3/ VS-009, which is about 193 km west of Melbourne, and about 25 km from the township of Beaufort.

Ben Nevis is 870 metres above sea level, and is worth 4 SOTA points.  It is located within the Mount Cole State Forest, and marks the gateway to the Grampians and the Pyrenees wine district.  Ben Nevis is popular with rock climbers and offers three distinct cliff faces: Red Rocks, North Cliff, & Centre Cliff.  It is also used by hang glider pilots.

Mount Cole State Forest consists of large native trees including Messmate, Manna Gum, and Blue Gums on the wetter southern half, while on the northern side woodland species such as Yellow box and Red Stringybark grow.   The rare Mt Cole Grevillia can also be found in the park, along with native orchids and a large number of wildflower species.

More than 130 species of birds have been sighted in the forest, along with kangaroos, wallabies, echidna, koalas, and possums.

The area was originally home to the Beeripmo balug aboriginal tribe, who formed part of the larger Djab Wurrung language speaking people.  They called the area ‘Bereep-bereep’ meaning ‘wild’  Beeripmo translates to ‘wild mount’.  Following the 1836 expedition of Major Thomas Mitchell, settlers soon moved into the area.  During the 1840’s timber harvesting with axe and cross cut saw commenced.  By 1856, steam powered mills commenced in the area.  By 1889, the demand from the towns on the Victorian goldfields fr building materials, firewood, and railway sleepers led to over thirty mills operating within the region, right up until 1904.  In 1981, the Victorian Forests Commission was established, and soon after Mt Cole State Forest was closed for timber harvesting.  By 1947, timber harvesting was reopened.

I parked the car just down from the carpark, packed up the gear into the back pack, and walked a short distance up to the summit.  There are two large communication towers on the summit, but as I was to find out they did not cause too many problems with the noise floor. 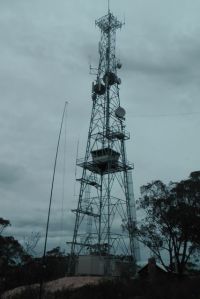 There are fantastic views on the top of the summit.  Out to the south is the imposing feature of Mount Buangor, which I was to climb the following day.  Out to the east you can see Mount Lonarch which was also on my list to climb.

I set up the equipment on the eastern side of the summit, not far from the main communications tower.  I sheltered behind a large moss rock which acted as a back rest.  There were no problems with securing the ends of the dipole, as there are lots of trees and shrubs on the top of Ben Nevis.

QRP stations to call in were Andrew VK2ONZ, Andrew VK3ARR, and Brent VK2MEV.  All of whom had very nice signals.

I also spoke with Tony VK3VTH who was portable in the Little Desert National Park as part of the Keith Roget Memorial National Parks Award.

Another interesting contact was with Freddo VK3FDI/mm who called in again from his maritime mobile set up on board his sloop ‘Four Winds’ on the Port Phillip Bay.  It was quite a nice day on top of the summit weather wise, and it was

From about 0615 UTC, the Over The Horizon Radar on 40m kicked in and was very strong, and despite the noise floor being low, it was proving difficult to work any weak stations.

After 37 QSO’s on 40m SSB, I decided to have a listen on 20m to see whether I could work some DX with my QRP set up.  The band was very busy with the All Asian Contest.  In particular I heard about half a dozen Hawaiin stations calling CQ Contest.  They were very strong, but unfortunately were participating in the contest, so sadly they weren’t looking to work VK stations.

I have posted a video of the activation on You Tube.