On Sunday (8th March 2015) I was left all alone.  My wife Marija and her mum left early that morning for 3 nights at Broken Hill.  So while the girls are away, the boy can play radio.  I headed to the Marne Valley Conservation Park, which is situated about 30 km north of Mannum, and about 10km south east of Sedan.

I reached the park by travelling from home to the historic town of Mount Torrrens, and then through to Birdwood.  I then travelled to Cambrai, which is a little town just to the west of the park.

The Marne Valley Conservation Park covers an area of about 105 hectares and it is bisected by the Marne River.  The park was dedicated in 1976 and consists of gently undulating land, with much of the park comprising of low lying, seasonally inundated river red gum flats.  The surrounding countryside was cleared of most of its gum trees during the late 1880’s and a saw mill existed in the area.  The local red gum was considered ‘superior’ to many other varieties of gum for use as railway sleepers.

The park is home to a large amount of wildlife including Western Grey kangaroos and waterfowl.  It was certainly alive with kookaburras during my activation.

The Marne River which passes through the park was once part of the main Adelaide to Sydney stock route.  The River was previously known as the South Rhine River.  However, as was the case with many place names here in South Australia, the name was changed in 1917 as Australia was at war with Germany.  The River’s name was changed to Marne after the Marne River of France, where the German advance was halted in 1914.  The South Australian Marne River’s headwaters are centres around the Eden Valley and Springton areas, and it passes through Cambrain before flowing into the Murray River at Wongulla.

Prior to being called the South Rhine and then the Marne, the river was originally known by the local Ngarrindjeri aboriginal people as Taingappa, meaning ‘foot track-trading road’.  The Aborigines used the river as a route up into the hills to trade with the Peramangk aboriginal people in the Barossa Valley, and to cut bark canoes from the River Red Gums in the hills which had thicker bark than those near the Murray.

The nearby town of Cambrai was also known as Rhine Villa.  It is reported that there was once a house or hut with a comical villa front in the area and a person named Skinner occupied it and called it ‘The Villa’.  The little township grew up around it and got the name of Rgine Villa, due to the proximity of the Rhine River.  The name was changed to remove any connection with German place names and it was named after the Battle of Cambrai in France during WW1.

Last year, two elderly bushwalkers became lost in this park and a major search was launched.  See the article below….

Prior to heading to the park I referred to the Marne Valley Conservation Park Management Plan which is dated 1994 and is horribly out of date.  It refers to a visitor access track running along the western boundary from the south to the picnic and camping area.  I was unable to locate this.  The gate which I did find on the southern side of the park, off Black Hill Road, was locked.  A familiar find at most South Australian Conservation Parks.  Locked gates.

I set up on the southern side of the park.  Access here is very easy.  The boundary fence is in very poor condition and can easily be stepped over.  There is even an old National Parks and Wildlife ‘Reserve’ sign on the gate which appears to have been there since the dim dark ages. 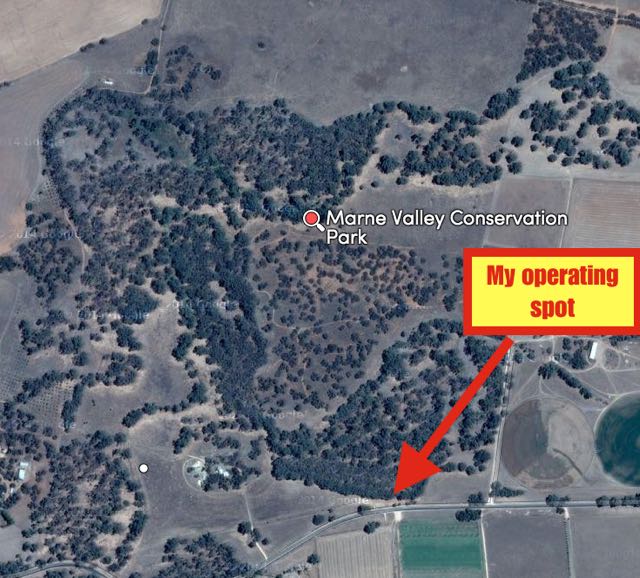 I set up the fold up table and deck chair and ran the Yaesu FT-857d and 40 watts for this activation.  I used the 40m/20m linked dipole supported on the 7m squid pole.  I used a wooden fence post to secure the squid pole to, with the assistance of an octopus strap.

I could not get on to my nominated operating frequency of 7.095 due to the Kandos Net still going, so I headed up to 7.105 and called CQ.  This was immediately answered by Mick VK3PMG in Stawell, followed by Phil VK5XR, Marc VK3OHM, and then Adrian VK5FANA on the Yorke Peninsula who was running QRP 5 watts (5/8 sent and 5/9 received).  I worked 9 stations in VK3 and VK5 and it then went very quiet.  So I took the opportunity of going for a 20 minute walk through the park.

After coming back from my walk I called CQ again on 7.105 and this was answered by Arno VK5ZAR, followed by Peter VK3PF and then Gary VK5PCM who was running QRP 2 watts (5/7 both ways).  I went on to work a further 18 stations in VK2, VK3, & VK5 until it slowed down again.   I tuned around the band and found Rod VK2TWR who was portable on as part of the Summits on the Air (SOTA) program.

After working Rod, I heard a few stations asking me to QSY up the band.  So I headed back to 7.105 where I was called by Bernard VK3AV, Grant VK2LX, Phil VK5RM and then Andrew VK3ARR.  I worked a further 4 stations, before deciding it was time to pack up and head off to the Ridley Conservation Park.