Our first activation for Sunday morning (29th March 2015) was the Leven Beach Conservation Park (CP), which is located just north of the little town of Corny Point on the Yorke Peninsula, and about 258 km by road from Adelaide. 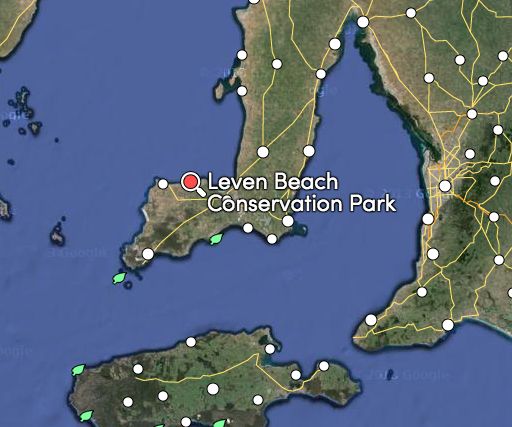 Above:- The location of Leven Beach CP.  Map courtesy of mapcarta.com

We last activated the Leven Beach CP back in 2013 for the 6 month anniversary of the VK5 Parks Award.  For full information on the park and details on that activation, please have a look at…..

Marija and I set up in the same spot as the previous activation which was at the end of Roe Road, on the beachfront.  Roe Road runs off the Corny Point Road and travels down passed the shacks to the beach.  At the end of Roe Road there is a carpark, with plenty of room to park.  You will clearly see the park on your right as you travel down Roe Road.

The Leven Beach Conservation Park is 502 hectares in size and was proclaimed in 198.  It is a coastal reserve located on Hardwicke Bay, part of the northern coastline on the upper ‘foot’ of Yorke Peninsula.  It has a six kilometre beach frontage backed by low cliffs and a hinterland of undulating, vegetated dunes.  The park conserves sheoak woodland and provides habitat for a nationally endangered species of butterfly, the Yellowish Sedge-skipper Butterfly.

The operating gear for this activation was the Yaesu FT-857d, 40 watts and the 40m/20m linked dipole.  We set up the deck chair and the fold up table on the sand just in front of all the coastal vegetation from the park.  It was a beautiful morning weather wise.  The ocean (Spencer Gulf) was very flat and calm, and I sat back and watched a few fisherman taking their boats out into the water with their tractors, and heading off for a morning of fishing.

The Europeans were absolutely belting in on 40m with the CQ WW DX Contest, so it was quite difficult to find a clear spot on the 40m band.  Finally I found 7.092 clear and put out a CQ call and this was answered by Steve VK3NSC, followed by David VK5KC, John VK5BJE, and then Allen VK3HRA.

My first park to park contact was about 4 QSO’s later and it was with Peter VK5KX who was activating the Hogwash Bend Conservation Park in the Riverland (5/9 both ways).

My next contact was with Doug VK2FMIA who was portable in the Horton Falls National Park in New South Wales.  Doug had a nice 5/6 signal on the Yorke Peninusla.  Doug has an excellent WordPress site, which can be found at…..

While I was enjoying the sunshine and on air, Marija took a walk along the beach, and through the park, and had a chat with some of the locals.  I had one local approach me who was walking her dog on the beach, and was very curious as to what I was doing.

I also received a call from Yorke Peninsula local and regular park hunter, Richard VK5ZRY, and we arranged to meet at my next park, the Warrenben Conservation Park to do a joint activation.  I had spoken with Richard a number of times on the radio, but we had never met in person.  So I was looking forward to the ‘eyeball’.

I went on to work a total of 36 stations on 7.092 until things started to slow down, so I then had a quick tune around the band and found Andrew VK1NAM on SOTA peak Mount McDonald, VK1/ AC-048.

I then lowered the squid pole and took out the links and re-erected the squid pole and headed for 14.309 and started calling CQ.  This was answered by Mike VK6MB (5/8 both ways), followed by Adam VK2YK, and then Daniel VK6LCK.  But that was the end of callers, so I headed back to 40m.

My last contact from Leven Beach was with Chris VK4FR/5 who had now moved to the Mount Taylor Conservation Park on Kangaroo Island (5/9 both ways).

It was time to pack up and head off to the Warrenben Conservation Park and meet up with Richard VK5ZRY.

I had a total of 49 contacts in the log from Leven Beach Conservation Park.