From Carribie Conservation Park (afternoon of Saturday 28th March) we travelled in to the little town of Corny Point, where stopped to have lunch at the Howling Dog Tavern.  What a great name for a pub.  Marija and I had eaten here before, back in 2013, during out visit to the Yorke Peninsula for the 6 month anniversary of the VK5 Parks award.  The food is good.  And the Bundy was nice and cold.  We also did some running repairs on the Toyota Hi Lux.  One of the spot lights on the bullbar had come loose.  In fact I had lost the theft proof bolt holding it in place.  It had obviously not been tight enough and had jarred loose on the corrugated roads.

After lunch we took a scenic drive down to the Corny Point lighthouse and then followed the West Coast Road, stopping off regularly to view the coastline.  We highly recommend this detour.  The West Coast Road will take you all the way down to Point Annie.  From there we headed back inland along the Point Annie Road until we reached the Marion Bay Road and then travelled south.  A number of kms south, we turned right onto Browns Beach Road and headed down to Gym Beach.  The views here are truly amazing.  We travelled into the Innes National Park from here and found a little car park all to ourselves.  We set up the radio gear there, overlooking the ocean (the Spencer Gulf). 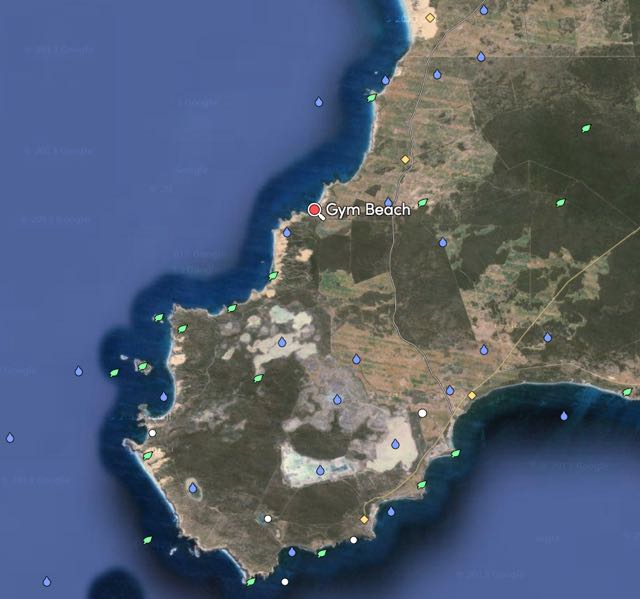 Above: the location of Gym Beach on the north western side of the park.  Image courtesy of mapcarta.com 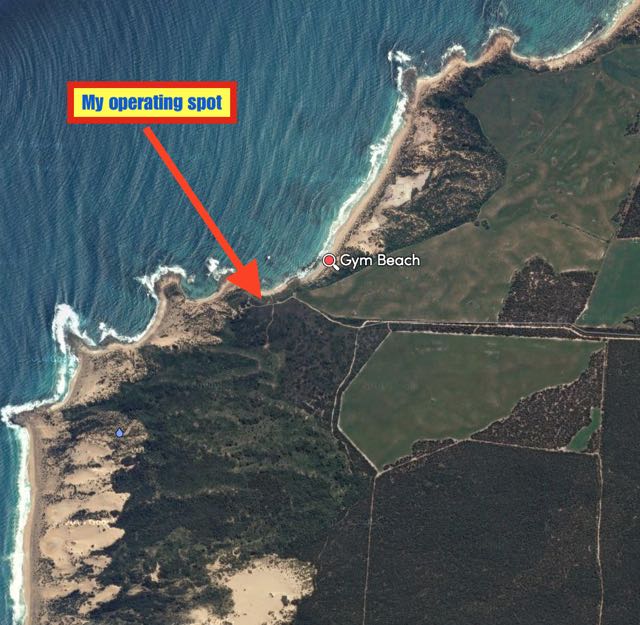 Above: Our operating spot at Gym Beach, close to the ocean.  Image courtesy of mapcarta.com

When the callers slowed down I took the opportunity of looking around the band and found Matt Vk1MA portable on SOTA peak VK2/ ST-006 (5/5 sent and 5/7 received).

I then lowered the squid pole and removed the links and headed off to 20m.  I started calling CQ on 14.346 and this was answered by Andy VK5AKH in the Coorong National Park.  And from there a steady flow of European park hunters called me from Italy, Spain, Hungary, Germany, Russia, Slovenia, France, Belgium, Slovak Republic, Austria, England, and the Czech Republic.  Thankyou to everyone that spotted me.  This clearly helped in the Europeans finding me.  I also received a call from Andrew VK1NAM amongst the European pile up.

But perhaps the highlight of the activation for me, was a contact with Peter VK3YE who was operating true QRP, 100 milliwatts.  Peter’s signal was weak (5/3) as you would expect, but perfectly readable.  Amazing what you can do with QRP!