On Sunday morning (25th October 2015) I had a little bit of a sleep in, as my intended park activation of the Livingstone National Park, VKFF-0292, was only 30 km south of Wagga Wagga.  Nether less I was still on the road by 7.00 a.m. NSW local time.  This was my last night in Wagga Wagga.  I had stayed at the International Hotel at Wagga Wagga which I can highly recommend.

I briefly drove around Wagga Wagga for a final look, before heading out to the park.  I stopped off at Geoff Lawson Oval, named after the former Australian cricketer, and also made a brief photo stop on the banks of the Murrumbidgee River. 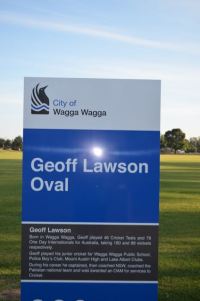 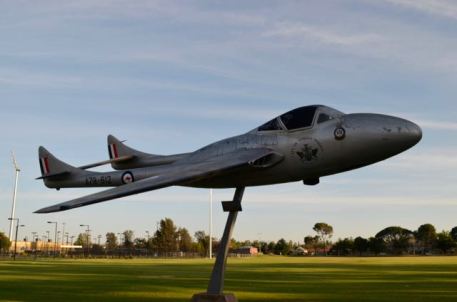 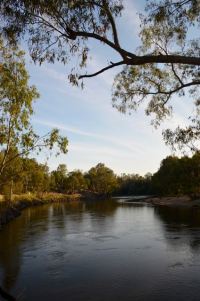 I then headed south out out of Wagga Wagga on the Holbrook Road, and then turned left onto O’Briens Creek Road, and then right onto Wrigleys Road which takes you into the park. 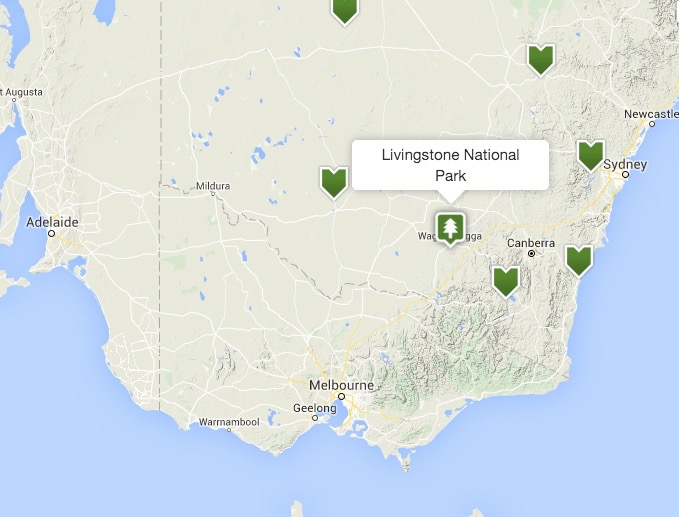 The park is well signposted along the way.  Not the normal big brown park signs we have in South Australia.  But keep an eye out for the blue coloured signs with the NSW NPWS emblem on them.  The park was clearly visible as I travelled along O’Briens Creek Road, as was Mount Flakney which I had activated the day before. 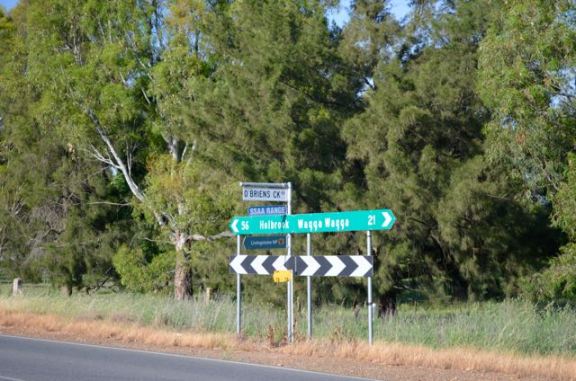 The turn off on Holbrook Road 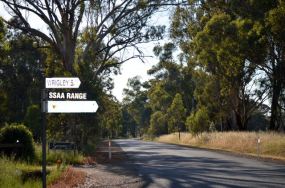 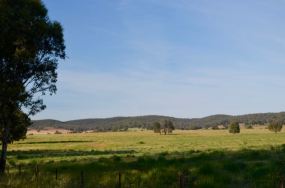 The park in the distance 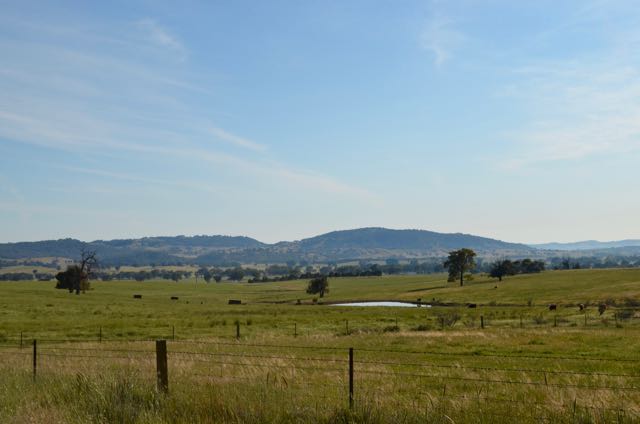 View of nearby Mount Flakney

I entered the park via Wrigleys Road and followed the dirt track up to Pine Ridge Track.  This looked like a nice elevated position to operate from. 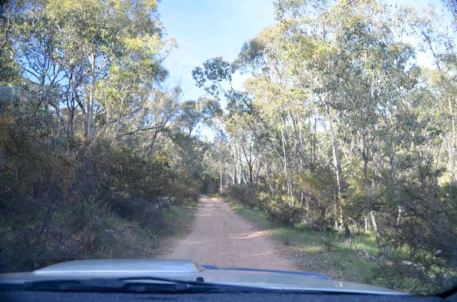 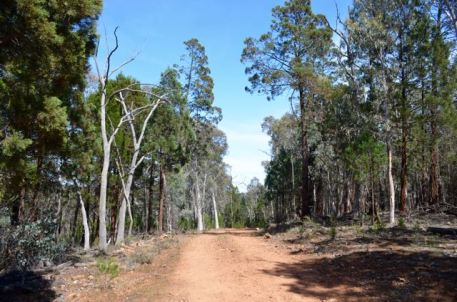 I found a small clearing on the northern side of Pine Ridge Track where people had obviously been camping, as there was a little campfire.  I parked the 4WD and started setting up the gear. 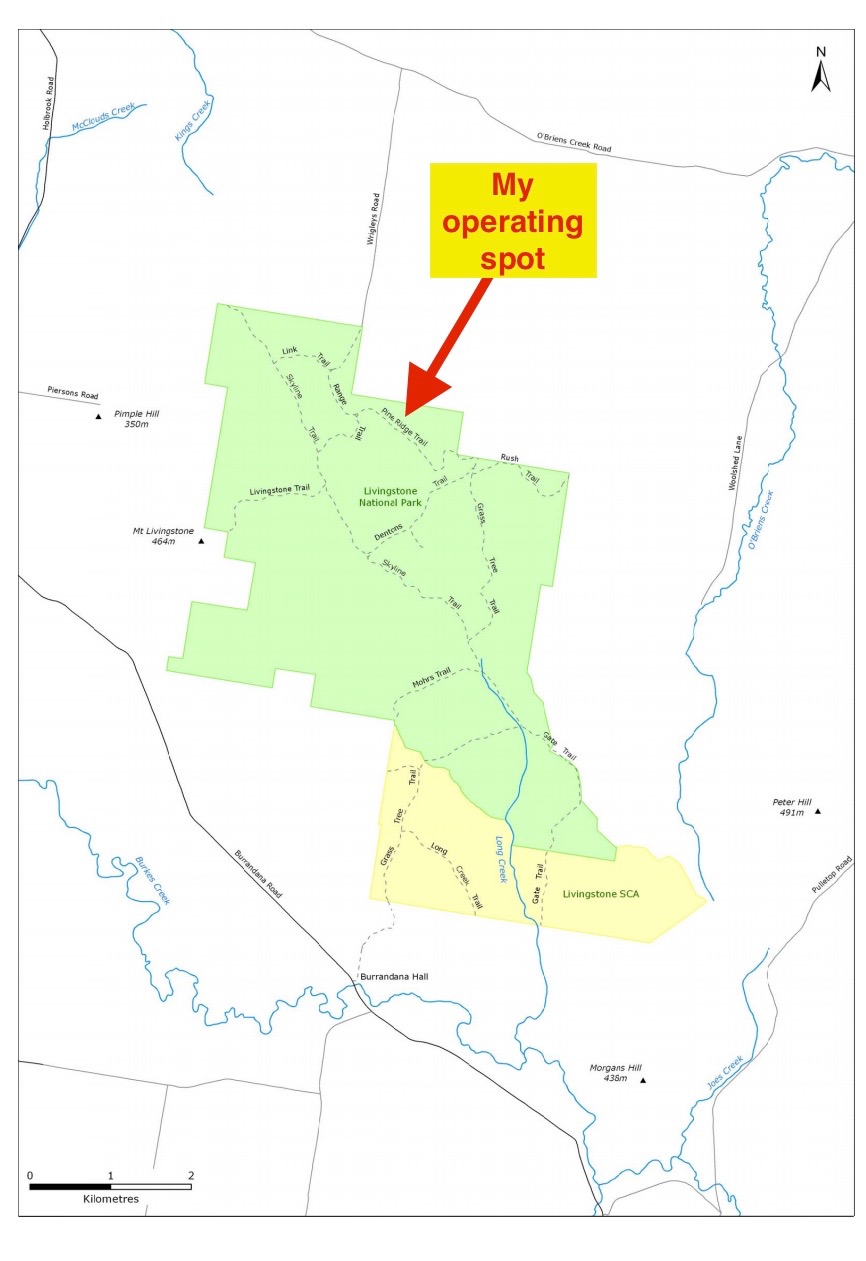 Livingstone National Park was established in January 2001 and is about 1,920 hectares in size.  The park was originally proclaimed as a State Forest in 1915 for timber located within the forest which was to be preserved for the town of Junee.  At one stage there was a railway line located next to the forest, used to carry timber.  In fact the park is still marked on Google maps as a State Forest (a good example of why I don’t rely on Google Maps).   In 1976 the Wagga Wildlife and Conservation Society requested that the state forest be gazetted as a national park after it was under threat, however the request was denied.  It wasn’t until January 2001 that the State Forest was gazetted as a National Park.

The park consists of four different types of vegetation, including grass trees, mallee, kangaroo grass, and open forest.  The park has been identified as having one of two colonies of squirrel gliders, located in southern New South Wales.  Over 100 species of native birds call the park home.  Livingstone National Park has been identified by BirdLife International due to its importance for the conservation of Swift Parrots and Superb Parrots.

After setting up I headed to 7.144, the frequency I had nominated on parksnpeaks.  Unfortunately the CQ World Wide contest was on and there were some very strong signals across the entire 40m band, including A71CV from Qatar on 7.144.  So I headed down the band and found that 7.085 was clear.  I started calling CQ and my first park hunter for this activation was Col VK5HCF in Mount Gambier with a good strong 5/8 signal.  This was followed by John VK5BJE, Peter VK5FLEX, and then John VK5NJ.  All with good strong 5/9 signals.

My next caller was Rob VK4FFAB who was portable in Aramoor National Park, VKFF-0662 with a very respectable 5/9 signal to Livingstone.

I went on to work a further 16 stations around Australia, including Peter VK2NEO who I arranged to catch up with later in the day.  It was at this time that I heard some rustling in the undergrowth.  As the two fugutives, the Stoccos, were still at large in the general area, my ears pricked up.  Fortunately, up over a ridgeline came some mountain bikers, who saw my 4WD and appeared a bit concerned as well.  I had a chat to the 2 lads who were locals, about their hobby and mine.  We also shared the view that we would high tail it out of the area if we saw the Stocco’s vehicle.

After the lads rode off into the bush, I hopped back on the radio and called CQ again.  This was answered by Ian VK5CZ/2 who was mobile out of Wagga Wagga to a summit for an activation as part of the Summits on the Air (SOTA) program.   After my contact with Ian, I had a steady flow of callers from across Australia.  Unfortunately I had a VK7 Foundation station calling and calling and calling, but not responding to my calls back to him.  So this made it a bit hard to pull out some of the weaker stations that were calling me.  Sorry if I missed anyone.

I was just about to scout around the bands to find the Wagga SOTA & Parks symposium attendees, who I knew were going to be out undertaking some SOTA activations, when Peter VK3PF/2 called me with a 5/9 plus signal from nearby Mount Flakney.  Peter was on the summit with John VK2YW/p, Warren VK3BYD/2, and Knud VK2KJJ, all of whom gave me a call. 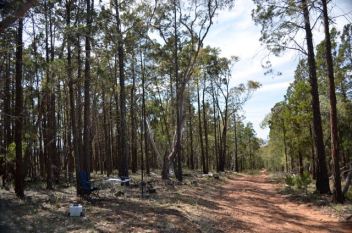 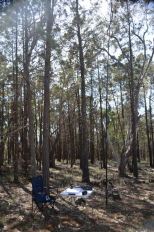 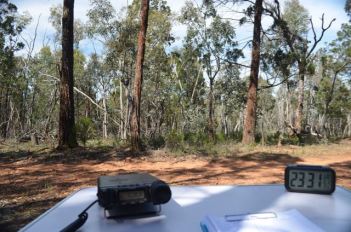 I then headed over to 20m and struggled to find a clear frequency due to the contest.  I called CQ on 14.308 and this was answered by Rick VK4RF, followed by Mike VK6MB, and then Peter VK6RZ.  Unfortunately another VK6 came up just below us and started calling CQ contest, so that put a quick halt to my activity on 20m.

I headed back to 40m, hoping to find Marcus VK3TST and Dave VK4DD who were also going to be out and about activating a local summit.  It wasn’t long before I found them on 7.090 calling CQ from a great summit called Wheel of Fortune, VK2/ RI-031.

My last contact before going QRT was with Ian VK5CZ/2 who was on top of Mount Flakney, VK2/ RI-025.

It was now just after 10.00 a.m. NSW local time, and I needed to pack up and head off to Leeton to catch up with Peter VK2NEO.  I had a total of 51 contacts in the log.  Another new park for me and with over 44 contacts I had qualified the park for the World Wide Flora Fauna (WWFF) program.