After leaving the Cape Otway lighthouse we decided that we would visit the Otway Fly.  No, that’s not a hairy, six legged pest!  The Otway Fly is a treetop adventures venue which consists of the Treetop Walk, and also the Zipline Eco-Tour.  The Treettop Walk is a 1 hour rainforest walk experience that is about 2 km in total length, and features a 600 metre long and 30 metre high, steel structured treetop canaopy walkway which takes you right into the treetops of the rainforest.  The Zipline-Eco-Tour is a 2.5 hour, fully guided experience and included training and simulation.  It inclues 8 cloud stations, 6 flights and 2 suspension bridges.

We travelled north along the Great Ocean Road, to Lavers Hill and then back east on the Colac-Lavers Hill Road to the little area of Ferguson.  From there we travelled south along Phillips Track.

For more information on the Otway Fly, please have a look at…..

After leaving the Otway Fly, we continued east along the Beech Forest-Lavers Hill Road, until we reached the little town of Beech Forest.  This is the home town of Albert Ernest Clifford ‘Cliff’ YOUNG, who was an Australian potato farmer and athlete.  He is best known for his unexpected win of the inaugural Sydney to Melbourne Ultramarathon in 1983, at the tender age of 61 years.  There is a little monument here in Beech Forest, which celebrates his life.

Also worth a look are the wooden sculptures designed by chainsaw sculptor, Brett DAVIES.  The sculptures comprise of a pioneering woman with babe in arms, a woodcutter to represent the timber industry, an indigeneous man in a possum skin coat, and a potato grower.

After leaving Beech Forest we travelled south along Binns Road, until we reached a beautiful little area called The Redwoods Picnic Area, which is located in the Great Otway National Park on the Aire River, near the junction with Farrell Creek.  Park activation, park activation, park activation!  Those were the thoughts going through my head and I managed to convince Marija that I would only be a short time. 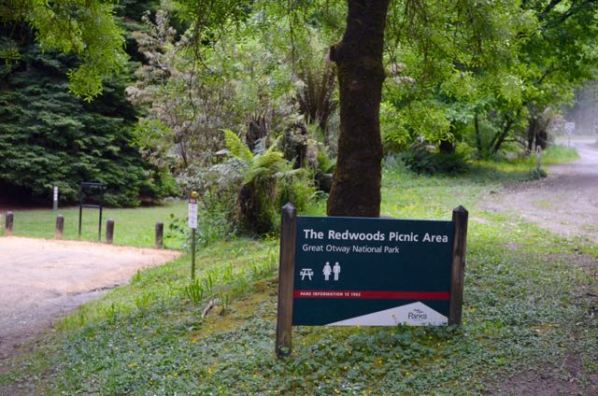 There was a beautiful little lawned area right alongside a plantation of Californian Redwoods ‘Sequoia Sempervirens’.  This is where we set up the fold up table and deck chair.  There was plenty of room to stretch out the dipole, the ends of which I secured to some of the nearby trees.

I commenced getting on air, whilst Marija explained to some 4WDers in the carpark, exactly what I was doing.

Above:- Map showing the location of where we were operating from.  Image courtesy of http://www.here.com

After turning on the radio I had a quick tune around the band and heard the dulcet tones of Bill VK3LY who was chatting away on 7.110 with some other stations. I had met Bill a number of days earlier whilst I was portable in the Bay Of Islands Coastal Park.   Bill was actually mentioning that he had caught up with me, so I decided to pop in and say hello.  I spoke with Bill, Bob VK5FPAC, Ian VK3AXH, and Bruce VK3FBNG portable at Cow Samp near Gunbower.  All were 5/9 signals.

I then headed up to 7.144 and started calling CQ.  Unfortunately there was no mobile phone coverage so I could not spot myself on parksnpeaks.  But it wasn’t long until I had my first park hunter, and it was Jeff VK5JK at Encounter Bay south of Adelaide, with a nice 5/9 signal.  Next up was Peter VK7LCW at Penguin in Tasmania, followed by Shaun VK3VLY and then Gerard VK2IO.

A few QSOs later I was called by Gordon VK5GY who was portable in the Mark Oliphant Conservation Park in the Adelaide Hills (5/9 both ways). 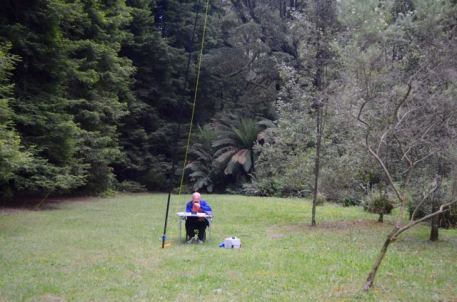 After lowering the squid pole and removing the links in the dipole, I headed for 14.310 where I called CQ.  My first taker was Rick VK4RF/VK4HA with a very nice 5/9 plus signal.  My first European followed after my contact with Rick, and that was Luciano I5FLN.  This was followed by 9A7C in Croatia, S52KM in Slovenia, and then Max IK1GPG in Italy.  I worked a further 6 stations on 20m, including John VK6NU, and a new country for me whilst portable, E51KIK in the South Cook Islands.

We had intended to continue south down Binns Road until we reached the Great Ocean Road, but the local 4WDers convinced us that this would be a long drive, so we drove back to Apollo Bay via