I had planned for two parks to be activated for day two of the 2015 VKFF Activation Weekend, Sunday 29th November, 2015.  My first activation was the Stipiturus Conservation Park, VKFF-0936, which is located about 6 km south west of the nearest town, Mount Compass, and about 50 km south of Adelaide.

Above:- Map showing the location of the park on the Fleurieu Peninsula, south of Adelaide.  Image courtesy of Location SA Map Viewer.

Again, this was a South Australian Conservation Park that I had operated portable from previously, but only as part of the VK5 National and Conservation Parks Award, prior to Stipiturus being added to the VKFF list for the World Wide Flora Fauna (WWFF) program. I had activated the park in October 2013 and October 2014.  For more information on the park and my previous two activations, please see my previous posts at…..

Stipiturus Conservation Park is around 68 hectares in size and protects a high conservation value wet heath and sedgeland peat bog system, known as Glenshera Swamp.  The park is home to one of the largest known swamp-based population of the nationally endangered Mount Lofty Ranges Southern Emu-wren (Stipiturus malachurus intermedius), after which the park was named.

To access the park I travelled from home through the little town of Echunga, and along the Brookman Road from Meadows to Willunga.  Along the way I spoke with Peter VK3PF who was operating portable in the Yaringa Marine National Park, VKFF-0957.

I then drove south along the Victor Harbor Road before turning onto Pages Flat Road.  This is prime dairy country on the Fleurieu Peninsula.  I then turned right into Dodds Road until I reached the intersection of Dodds Road and Blockers Road.  I continued south for a very short distance until reaching Saffrons Road where I turned right.  There is no signage leading to the park.  There are some nice views of the park in the distance as you travel along Saffrons Road. 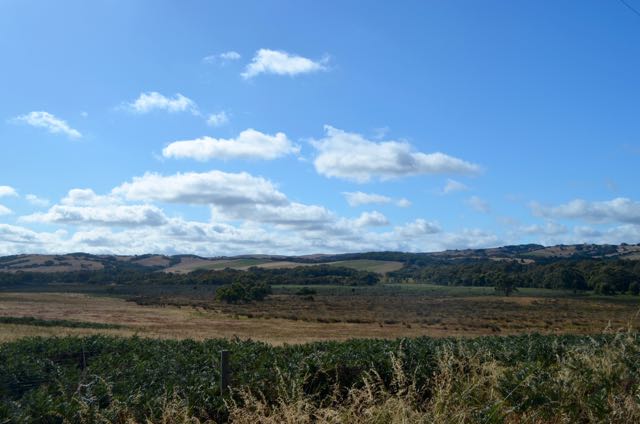 Above:- View of the park from Saffrons Road.

At the end of Saffrons Road I turned left into Beare Lane.  The park is just up on the left from here and is signposted.  Beare Lane is a dirt road but is in excellent condition and is easily passable in a conventional vehicle.

Beare Lane is the only access to this park.  It is located on the southern side of Stipiturus.  The western, northern and eastern sides of the park and landlocked by private property. 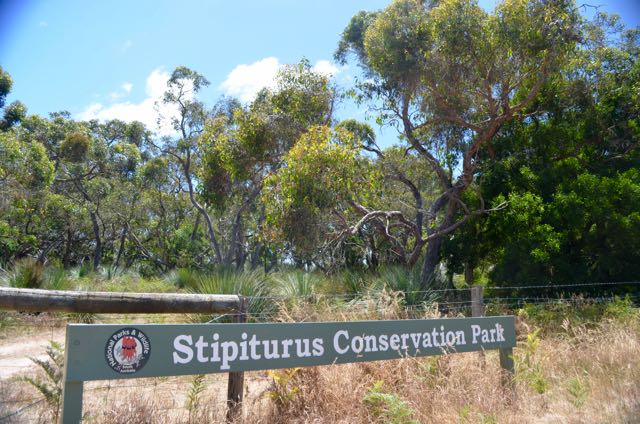 This is another one of those South Australian Conservation Parks that sadly the Department Environment Water Natural Resources (DEWNR) lock up like Fort Knox.  I understand their thinking that locking these parks up keeps the bad people out.  But when there is no way of getting into a park except for scrambling over a barbed wire fence, I think this is very poor.  Thats okay if you are young and nimble, but in my opinion it excludes elderly people or people with a disabilty.  I have notified DEWNR of this in the past, but unfortunately it has fallen on deaf ears. 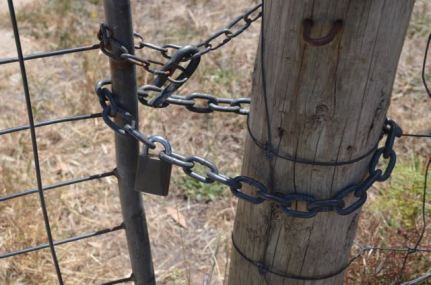 My equipment loaded up at the gate

There is a little bit of scrub just off Beare Lane on the southern side of the park.  It contains gum trees and an understorey of ferns.  There is another patch of scrub a little further to the north, and if you follow the track from the gate, this will take you to the swamp area. 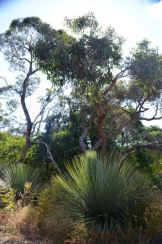 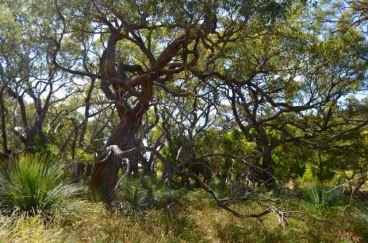 I collected all my equipment from the 4WD and lined it up at the gate.  I scrambled over the fence, trying not to get caught up in the barbed wire.  I then reached over and collected all my gear including the transceiver, power supply, antenna, fold up table, and deck chair.  I then walked a short distance up the track and set up.  It was already quite a warm morning, so I set up the table and chair in the shade of one of the gum trees. 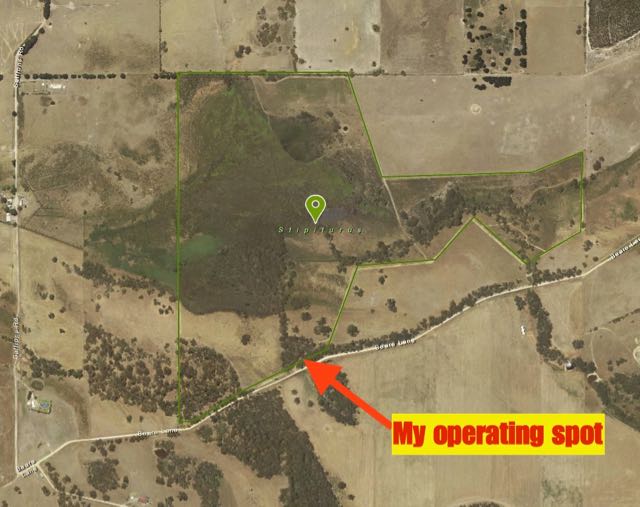 I was ready to go by 2245 UTC (7.15 a.m. South Australian local time).  Prior to calling CQ I spoke with Tony VK1VIC who was activating the Wanniassa Hills Nature Reserve VKFF-0865 (5/8 both ways).  I then headed to 7.110 and commenced calling CQ.  This was answered by Adam VK7VAZ in Tasmania, followed by Ron VK3MRH and then Matt VK1MA.  My fifth contact of the morning was with Peter VK3PF who was operating portable from the Yaringa Marine National Park, VKFF-0957.  Peter had an excellent 5/9 signal.

I worked a further 9 stations in VK2, VK3, and VK5, before being called by another park activator, Mick VK3PMG who was activating the Leaghur State Park, VKFF-0762.  Mick was romping in to Stipiturus with a beautiful 5/9 signal.  And then just 2 QSOs later I was called by Peter VK5KPR who was operating portable from the Dutchmans Stern Conservation Park, VKFF-0817, in the north of South Australia.  Another 2 QSOs passed and I was called by Adrian VK5FANA who was activating the Clinton Conservation Park, VKFF-0813, on the Yorke Peninsula.

A number of the regular park hunters then called in, and this was soon followed by another park to park QSO, with Ian VK1DI who was activating the Jerrabomberra Wetlands Nature Reserve, VKFF-0847.  Ian’s signal was quite weak but we had a successful contact (5/1 sent and 5/2 received).  Some of the regular hunters followed, but calls soon slowed down.  So it was off on my quest to find some more park activators on the 40m band.

I soon found Tony VK1VIC on 7.090 who was operating from the Farrer Ridge Nature Reserve, VKFF-0840.  Tony’s signal was also quite low down but we were able to hear each other perfectly due to the low noise floor in both our parks (5/3 both ways).  But Tony was the only new activator I heard on the band.  All of the others that were calling CQ, had already called me.  So I then moved up to 7.110 and called CQ.  Ivan VK5HS from Renmark in the Riverland responded with a very strong 5/9 signal, and this was followed by Mal VK5MH who was maritime mobile on the Murray River.  Next up was another park to park contact.  This time it was Jim VK1AT/3 who was operating portable from The Lakes National Park, VKFF-0484.  Jim’s signal was very low but we successfully exchanged park details and signal reports (5/1 both ways).

Things slowed down quite quickly again, so I again ventured across the 40m band and soon found Tony VK3VTH on 7.120 in the Shepparton Regional Park, VKFF-0976, with a good 5/7 signal.  But Tony was the only new park activator, so I decided to have a listen on 20m.  The 7 metre squid pole was lowered and the links removed in the dipole, and I commenced calling CQ on 14.310.  My first responder was Keith VK2PKT from Parkes.  A few QSOs later, the park to park action continued.  I spoke wth Gerard VK2IO portable in the Cattai National Park, VKFF-0092 running just 12 watts with a nice 5/5 signal.  And this was followed by a call from Greg (VK8GM) operating the Alice Springs Amateur Radio Club call of VK8AR, from the West McDonnell Ranges National Park, VKFF-0532.  And shortly afterwards my third park to park on 20m, this time with Ian VK1DI activating Jerrabomberra Wetlands Nature Reserve, VKFF-0847.

Looking south back towards the gate and Beare Lane

Looking north up the track 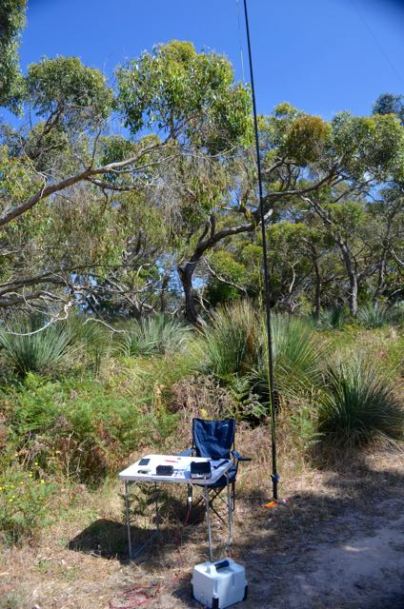 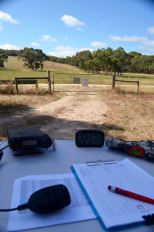 I worked a handful of other stations on 20m before callers slowed right down.  It was an ideal time to try out 15 metres.  So down came the squid pole and I laid the 20m/40m linked dipole on the ground, whilst erecting the 15m dipole.  Prior to calling CQ on 15m I had a tune around the band to gauge propagation.  I soon found Adam VK2YK on 21.275 calling CQ from SOTA summit Castle Hill, VK4/ NH-136, overlooking Townsville in Far North Queensland.  Adam’s signal was quite low down but we successfully completed our QSO (5/1 sent and 4/1 received).