It was Monday morning (4th April 2016) and unfortunately it was time to head home.  Marija and I had enjoyed three fantastic nights on the Fleurieu Peninsula, staying at Goondooloo Cottage which we highly recommend.

It was also the end of another successful anniversary weekend for the VK5 National and Conservation Parks Award.  I don’t think there was as much activity as previous years, but netherless it was still a very enjoyable and busy weekend on the airwaves.  Our one and only planned park activation for the day was the Myponga Conservation Park 5CP-157 and VKFF-0921.  The park is situated about 67 km south of Adelaide, and about 8 km south of Myponga.

Above:- Map showing the location of the Myponga Conservation Park on the Fleurieu Peninsula, south of Adelaide.  Image courtesy of Location SA Map Viewer.

Prior to heading to the park, Marija and I drove south along Blowhole Creek Road, down to Blowhole Beach.  This is definitely 4WD only.  Don’t even try to attempt this in a conventional vehicle.  The drive was a lot of fun, and the views out to Kangaroo Island were quite spectacular. 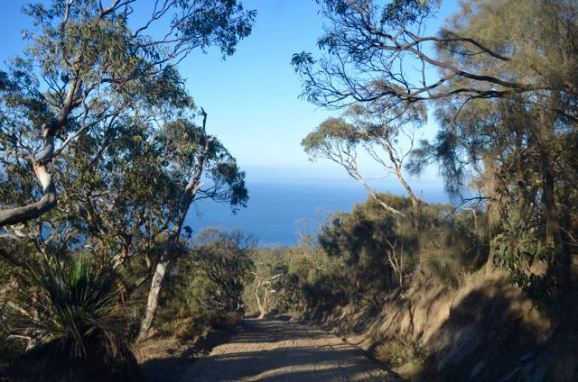 Blowhole Beach in the background

We then headed back to Delamere and along the Main South Road, to Normanville and Yankalilla.  We continued north towards the town of Myponga, and turned onto Wild Dog Creek Road and then to Kemmis Hill Road.  We were about 300 metres above sea level here and there were some very nice views of the surrounding countryside and out to the ocean. 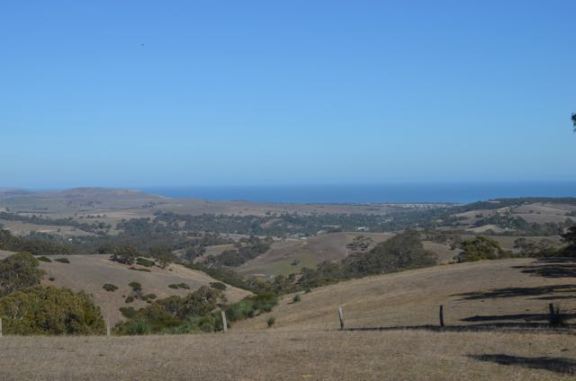 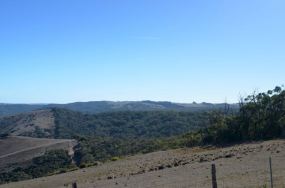 Myponga Conservation Park is 168 hectares in size and is very hilly terrain.  The name Myponga is taken from the Aboriginal word ‘maippunga’ meaning ‘high cliffs’.  The famous Heysen Trail passes through the park.

Marija and I had expected to walk into this park along the Heysen Trail, so we had prepared the Yaesu FT-817nd and the backpack.  But after talking to one of the locals as we drove along James Track, we were given directions to a 4WD track leading to the park.  The track runs off James Track and is near the property called ‘Martinga Park’.  This was to be a unique park for me.  In fact this was the first time that Myponga Conservation Park had been put on air.

As we drove along the track we passed a number of bee hives.  The bees were busy at work and you could clearly smell the honey.

It wasn’t long before we reached the south eastern corner of the park. 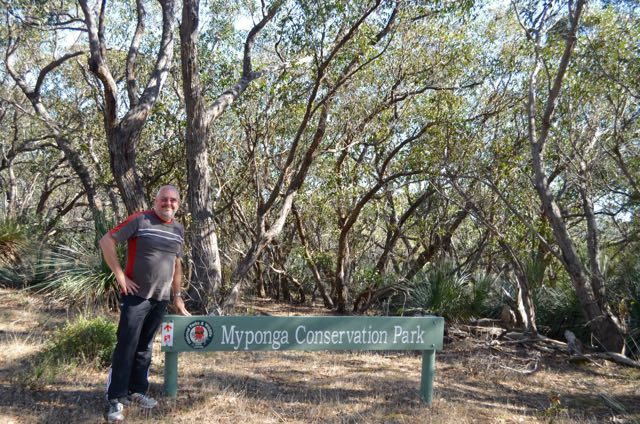 This is where we set up.  Out came the deck chair and the fold up table.  It was quite a warm morning, so the shade provided by the gum trees was very welcome.

Above:- Aerial view of the Myponga Conservation Park, showing the boundaries, and our operating spot in the south eastern corner.  Image courtesy of Location SA Map Viewer.

After setting up I commenced calling CQ on 7.144.  My first taker was Col VK5HCF in Mount Gambier who was a strong 5/8, followed by Mick VK3PMG in western Victoria, Charlie VK5KDK, and then Peter VK3PF.  The 40m band was in good condition again with callers from VK2, VK3, VK4, VK5, VK6, and VK7.  I worked a total of 39 stations on 40m including Phil VK2JDL on SOTA peak Mount Marulan VK2/ ST-039, and Gerard VK2IO in the Bouddi National Park VKFF-0049.

I then moved up to 20m and commenced calling CQ on 14.310.  I called and called and called and eventually Cliff VK2NP came back to my call after I had self spotted on parksnpeaks.  I was competing with the Over the Horizon Radar (OTHR) on 20m, and managed 5 contacts into VK2, VK3, and VK6, including another Park to Park contact with Gerard VK2IO.  As it was fairly quiet, it offered Gerard and I the opportunity of having a good chat.  Ray VK4NH/6 had also informed me that he had just worked a Hawaiin park activator on 14.307.  I listened there, and could hear a voice faintly in the distance, but was unable to make a successful contact.

I went back to 40m very briefly to pick up any of the stragglers, before trying my luck on 15m on 21.244.  My first taker on 15m was Rick VK4RF/VK4HA, followed by Ray VK4NH/6 who kindly spotted me on the DX Cluster.  I was then called by my good mate Phil ZL2TZE at Blenheim on the North Island of New Zealand.  A number of Japanese stations followed, along with Geoff VK6FNLW.  The signals coming out of Japan were very strong.

After around 2 hours in the park, Marija and I decided to pack up and head home.  I had a total of 57 contacts in the log and had successfully activated the park.

Prior to leaving the park, Marija and I continued along the 4WD track to the western boundary of the park.  There are some great views along the track.

Out to the north is the thick scrub of the park, set amongst very hilly terrain, and to the south are the cleared hills and out to the sea. 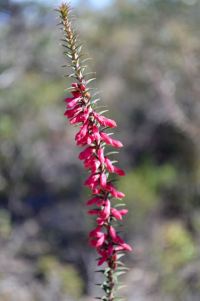