Our second park activation for Sunday 3rd April 2016 was the Eric Bonython Conservation Park 5CP-062 and VKFF-0877, which is located on the Fleurieu Peninsula, around 100 km south of Adelaide.  It is just a short drive from our previous park, Waitpinga Conservation Park.

After leaving the Waitpinga Conservation Park we continued south on the Tunkalilla Road and then turned left onto Rymill Road.  This is quite hilly country, with some great views out to sea, including views of The Pages, and Kangaroo Island.

Above:- View out towards The Pages.

The Eric Bonython Conservation Park takes its name from Eric Glenie Bonython (1910-1971) who was an author, explorer, and conservationist.  The park is quite small and is situated on the northern side of Rymill Road.  It is situated on a ridgeline, with great views out across farming land and the ocean to the south, and farming land to the north.  The Tunkalilla Creek flows on the northern edge of the park.

The park soon comes into view only a few hundred metres after turning onto Rymill Road.  The park sign is quite visible amongst the narrow length of scrub. 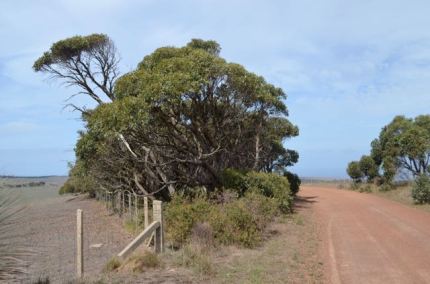 We set up in a clearing amongst the scrub in the south western section of the park.  For this activation I ran my normal park equipment, consisting of the Yaesu FT-857d, 40 watts, and the 20m/40m linked dipole and the 15m 1/2 wave dipole. 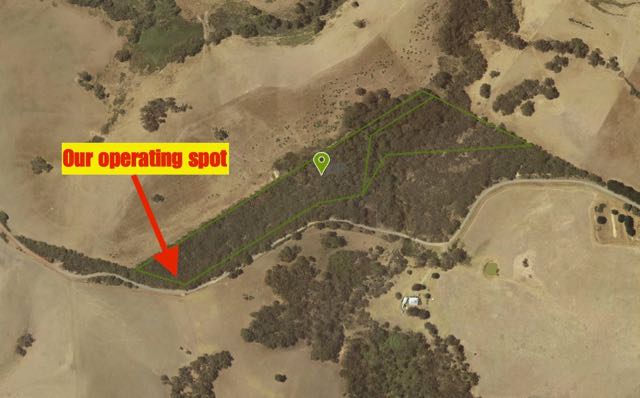 Above:- Aerial view of the Eric Bonython Conservation Park, showing our operating spot in the park.  Image courtesy of Location SA Map Viewer.

Prior to propping on a frequency and calling CQ, I tuned across the band and worked the following park activators:-

I then headed to 7.150 and commenced calling CQ and this was answered by Peter VK3PF operating portable in the Snowy River National Park.  This was followed by Steve VK5SFA operating portable in the Morialta Conservation Park.  Steve was using a 1.2 metre diameter magnetic loop antenna and had a beautiful 5/9 signal.  There was a steady flow of callers from across Australia: VK3, VK4, VK5, VK6, and VK7.  More Park to Park contacts followed, including:-

I then moved up to 20m and called CQ on 14.310.  The ever reliable Rick VK4RF/VK4HA was there waiting for me and kindly spotted me.  I was then quite surprised when I was called by VK5ARC/p (op Barry VK5KBJ) in the Onkaparinga River National Park.  I worked a further 8 stations in VK2, VK4, and VK6.

I then lowered the squid pole and put up the 15m 1/2 wave dipole and started calling CQ on 21.244.  I was extremely pleasantly surprised to be called immediately by Joe KG6JDX in Guam.  This was a new country for me whilst operating portable.  Joe was a very strong 5/9 and gave me a 5/9 from Guam.  Rick VK4RF/VK4HA then called in, and this was followed by Alberto P29LL in Papua New Guinea.  This was another great contact.  A number of Japanese stations then followed, all of whom had strong signals.  I ended up working a total of 11 stations on 15m from VK4, Guam, Papua New Guinea, and New Zealand.

I then moved back to 20m and 14.310 and called CQ for around 10 minutes but there were no takers.  Mobile phone reception in the park was very marginal, and it took numerous attempts to eventually self spot on parksnpeaks.  But despite being spotted, I had no callers.  So I headed back to 40m briefly before going QRT, working a further 19 stations, including the following park to park contacts:-

It was getting mightily cold, and dark, so Marija and I pack up and headed back to Goondooloo cottage.  I had a total of 100 contacts in the log.

Marija and I spent a very quiet night in the cottage, following a nice meal and a few more beers from the Smiling Samoyd Brewery. 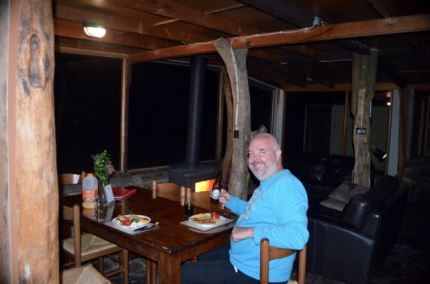