My one and only planned activation for Sunday 12th June 2016 was the Carpenter Rocks Conservation Park VKFF-1018 and 5CP-038.  This was another park that had been activated previously (including by myself) for the VK5 National & Conservation Parks Award, but it had not been activated for World Wide Flora Fauna (WWFF).  So this was to be a new park for me and all the hunters who worked me.  I was also going to see how many contacts I could make for the VK Shires Contest. 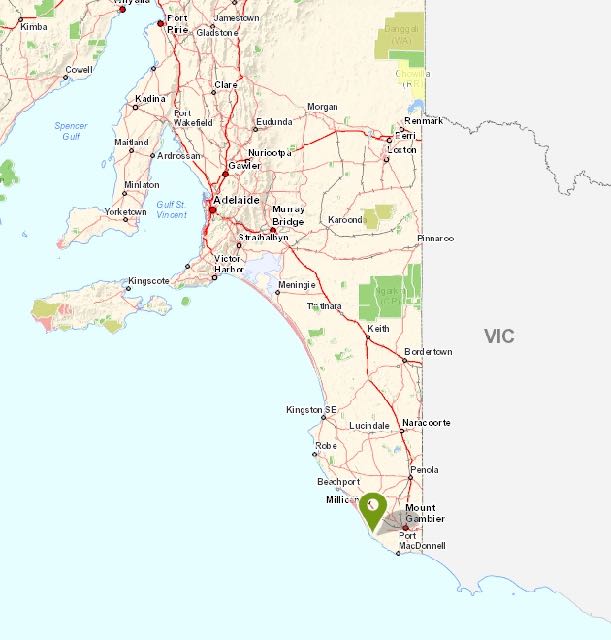 I left Mount Gambier quite early in the morning, so it was slow going on the roads.  There were lots of kangaroos and wallabies on the edge of the road, and crossing the road at times. 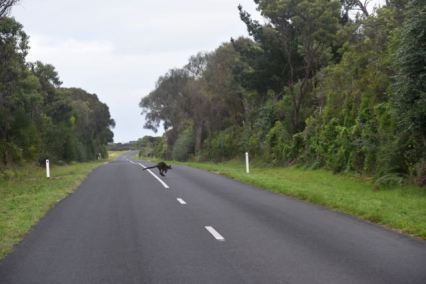 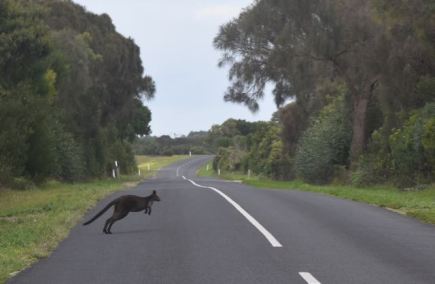 And then there were the wombats! 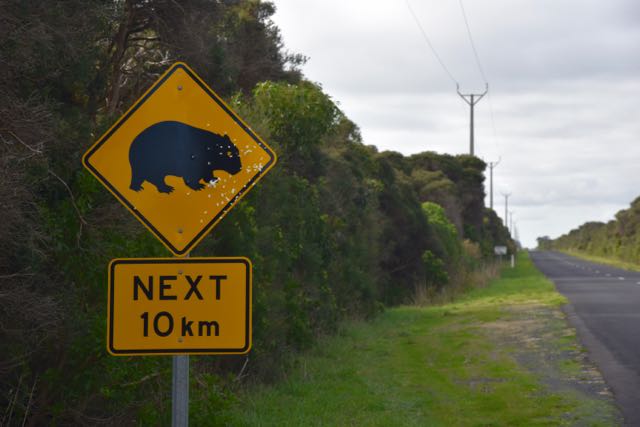 Carpenter Rocks Conservation Park protects 30.5 hectares of coastal habitat, which was purchased with the assistance of the Australian Government’s Natural Heritage Trust.   A number of threatened species and plant communities are conserved within the park.  The park protects part of the only known population of Carpenter Rocks Manna Gum and provides significant roosting habitat for the Orange-bellied Parrot, which is critically endangered at a national level.

The land comprising the reserve is significant for the local Aboriginal Boandik people, with one site of significance located in Carpenter Rocks Conservation Park and another two sites within close proximity.

Carpenter Rocks Conservation Park was proclaimed on 6 September 2001 under the National Parks and Wildlife Act 1972 with a section 43 proclamation providing for existing and future rights for exploration and mining under thePetroleum Act 2000.  The South Australian Government purchased the land with the assistance of the Australian Government through the National Reserve System Program of the Natural Heritage Trust and a contribution from the Nature Foundation SA Inc. 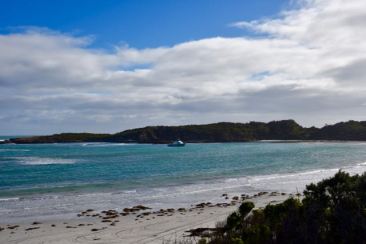 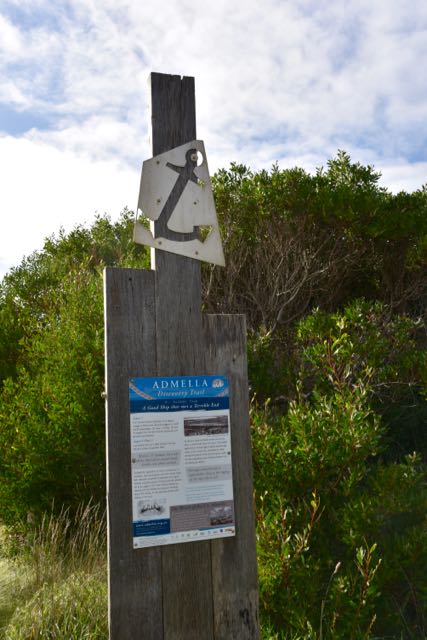 To access the park you need to travel along Carpenter Rocks Road, into the little seaside township of Carpenter Rocks.  Then turn left onto Pelican Point Road and travel south east.  You will find a small clearance in the scrub a short distance down on the left, and this is where you enter the park.  You will drive into a small clearing and this is where the park sign is located.  There is a track which then follows a dog leg around to the left and follows the power lines through the park.

The last time I activated this park back in September 2013, I activated from a clearing in the scrub about 100 metres along the 4WD track.  This time I set up near the park sign.  The 4WD track looked way too overgrown to drive down and I was concerned that I might not be able to turn around.

Sadly this park appears to be a bit neglected.  There are no real walking tracks through the park as the vegetation is just too thick.  The park is not sign posted from the road, which seems to be a common theme with many South Australian parks. 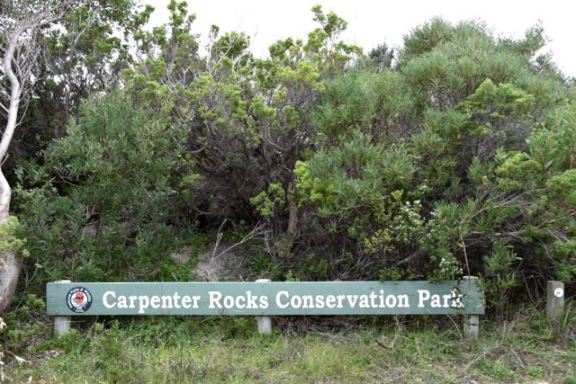 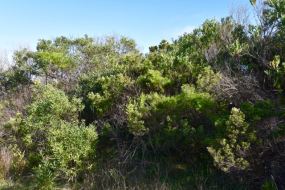 So with the 4WD track being overgrown I wasn’t left with a lot of options as to where to set up.  I was also cognisant of nearby overhead power lines and was concerned that they would be throwing off a bit of noise.

Fortunately after setting up, I was pleasantly surprised that the band was very quiet.  The power lines appeared to be having no adverse effect on the noise level.  I did not go to 7.144 for this activation, as it was a Sunday, and the upper portion of the 40m band was occupied by the numerous WIA weekly broadcasts.  So I called CQ Contest and CQ Parks on 7.110 and this was answered by David VK3IL, followed by Marcus VK3TST, and then Andy VK3VKT.  It was not long before I was in a bit of a rythm with a steady flow of callers from all across Australia.  The 40m band was in excellent shape.

I went on to work a total of 75 stations on 7.110 before things started to slow down a little.  These contacts included Park to Park contacts with Marcus VK3TST who was portable in the Clinton Conservation Park VKFF-0813, and Rob VK4AAC/3 in the Shepparton Regional Park VKFF-0976.  I also worked VK3SOL (with Peter VK3FPSR at the mic) at the Echuca Steam Rally.

When things slowed down I tuned across the band and found Michael VK3FCMC operating portable from the Organ Pipes National Park VKFF-0627.  This was my third Park to Park contact for the activation.  I then moved back to 7.110 where I worked a further 8 stations in VK3 and VK5.  But things had really slowed down, and many CQ calls went unanswered.  So it was off to 20m for me where I worked 13 stations from VK2, VK3, VK4, VK6, VK7, and New Zealand.

I then went back to 40m for one lat quick listen and worked 5 further stations.  This included another Park to Park contact.  This time with Peter VK3PF who was portable in The Lakes National Park VKFF-0484.

I had spent a little longer in the park than expected (a total of 3 hours) and it was time to pack up and head off to the SERG Convention.  I had a total of 102 contacts in the log.

Thanks to Rick VK4RF for posting me on Facebook.  And thanks to Chris VK3AWG, David VK3IL, & Adrian VK5FANA, and for spotting me on the DX Cluster.

Following my activation at Carpenter Rocks I headed back to the motel to freshen up and change and then headed in to the SERG Convention/Hamfest.  I spent an hour or so there chatting to amateurs. 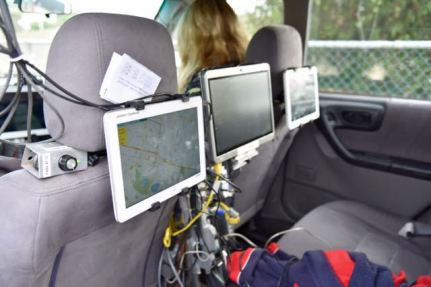 It was still mid afternoon and I had a few hours before all the fox hunters were going to be in, and for the formal presentations (including mine) would start.  So I headed off up to the Blue Lake and surrounds and made a number of contacts from my mobile.

I then headed back to the Scout Hall and gave a presentation on the Wireless Institute of Australia (WIA), and this was followed by the traditional SERG dinner.  A great night. 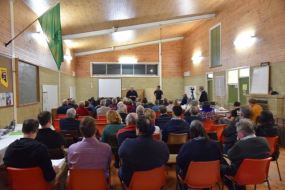 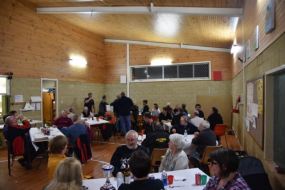