On the way home from the Coorong I talked Marija into a quick stop off at the Mowantjie Willauwar Conservation Park, 5CP-152 and VKFF-0919.  The reason for the inpromptu activation was to spend an hour or two competing in the Trans Tasman Low Band Contest.  The contest has an aim to encourage Low Band activity trans Tasman, that is between VK and ZL, on the 160, 80 and 40m bands.

Mowantjie Willauwar Conservation Park was proclaimed on the 2nd June 2005, and conserves nearly 143 hectares of Southern Cyprus Pine Forest.  It is situated about 6 km south west of Tailem Bend.  Mowantjie is the aboriginal name for the native pine found in the park, while Willauwar is a plural word meaning ‘forest of species’.  Therefore the name Mowantjie Willauwar means ‘Native Pine Forest’, and this is a very accurate description of the park.  The park was originally known as the Tailem Bend Forest and still appears on Google maps as such.

For this activation I ran the Yaesu FT-857d, 40 watts and a 20m/40m/80m linked dipole which I supported with the 7m heavy duty squid pole.

This park always seems to be frequented by very hungry mosquitos and that combined with the freezing temperatures of just 1 degree C, did not persuade me to stay any longer than the 90 minutes.

Thanks to everyone who called.  I even picked up another two Park to Park contacts….with Gerard VK2IO in Dharug National Park VKFF-0139 and Marcus VK5WTF in Morialta Conservation Park 5CP-142 and VKFF-0783. 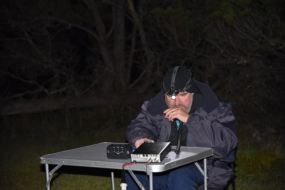 I contacted the following stations on 40m SSB:-

I contacted the following stations on 80m SSB:-

Yesterday (Saturday 16th July 2016), my wife Marija VK5FMAZ, and I headed down to the Coorong with the intention of activating a brand new park, the Salt Lagoon Islands Conservation Park, 5CP-203 and VKFF-1092.  However we were not entirely sure that we could gain access to the park, so our fall back plan was the adjacent Coorong National Park 5NP-005 and VKFF-0115.  Aerial maps showed a track towards the end of Pelican Point Road but we were not sure what we would encounter there.  A gate perhaps?  Information on the internet was less than helpful with regards to this park. 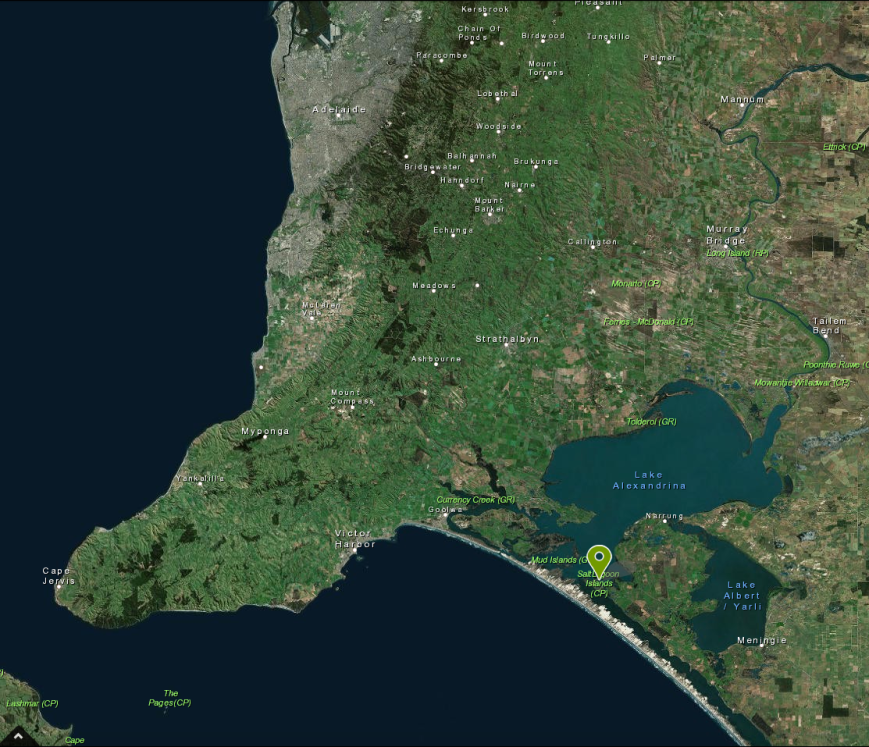 Rather than travelling down the South Eastern Freeway to Murray Bridge and Tailem Bend, Marija and I drove down through the beautiful wine growing region of Langhorne Creek and then on to Wellington which is situated on the Murray River.  Wellington is just upstream of the Murray where it empties into Lake Alexandrina.  Wellington was the original crossing of the Murray River for people, livestock, and goods travelling overland between Adelaide and Melbourne, until a bridge was built at Murray Bridge in 1879.  But there are no such luxuries of a bridge at Wellington.  We boarded the ferry here and travelled across the river.

Above:- Crossing the Murray River at Wellington.

After crossing the mighty Murray River we continued south on the Princes Highway until we reached Pottaloch Road and headed towards Port Malcolm.  The Pottaloch Road follows the southern boundary of Lake Alexandrina, which is a large freshwater lake comprising 1,061,469 km2.  The lake was named after Princess Alexandrina, the niece and successor of King William IV of Great Britain and Ireland.  We stopped for a short look at the Port Malcolm lighthouse, also known as Mundoo Light.  It is Australia’s only inland light station, with the concrete tower also being Australia’s smallest lighthouse.  The lighthouse operated between 1878 and 1931 to mark the narrow passage between Lake Albert and Lake Alexandrina. 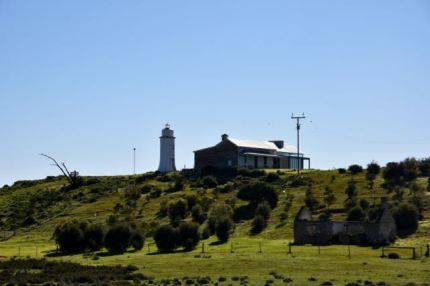 We then crossed the ferry at Port Malcolm and on to Narrung which is located at the northern end of the Narrung Peninsula, which separates The Coorong from Lake Albert, adjacent to The Narrows, which separates Lake Albert from the larger Lake Alexandrina.  Lake Albert was named after Prince Albert, the Consort of Queen Victoria, by the South Australian Governor, George Gawler.

Narrung is a tiny place with a population of only around 275 people.  A little further on is the small settlement of Raukkan which is an indigenous aboriginal community.  It is the birthplace of David Unaipon, the inventor and author, whose image appears on the $50.00 note.

We left Narrung and drove south along Loveday Bay Road, and it wasn’t long before the impressive sand dunes of the Coorong soon came in to view.

We then drove north west along Pelican Point Road, with the impressive Coorong to our left.  In the distance we could see a trig point situated on one of the high points on the northern side of Pelican Point Road.  But alas, no SOTA summit here! 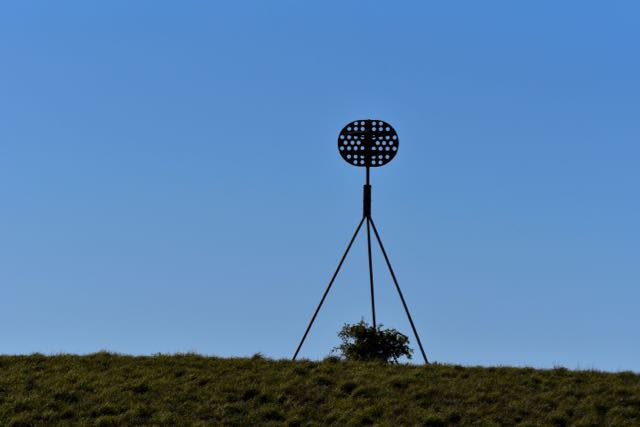 We kept our eyes peeled for a possible entrance to the Salt Lagoon Islands Conservation Park, and soon came across the track we believed we had spotted on the maps.  Sadly there as a gate here.  And although it was not locked and there were no signs, I wasn’t prepared to enter until I had confirmed that I could legally do so.  We did bump into some Fisheries officers, but sadly they had no local knowledge of the park.  We also tried calling the after hours number for the Department of Environment Water and Natural Resources (DEWNR) but they were also unable to assist.

So it was time to implement Plan B, the Coorong National Park.  The Coorong is a lagoon ecosystem and is an amazing place.  It was alive with various waterbirds as you can see from the photographs below.

We even came across this guy, a Western Grey kangaroo.  Emus are also often seen in the park, but we didn’t sight any of those on this occasion. 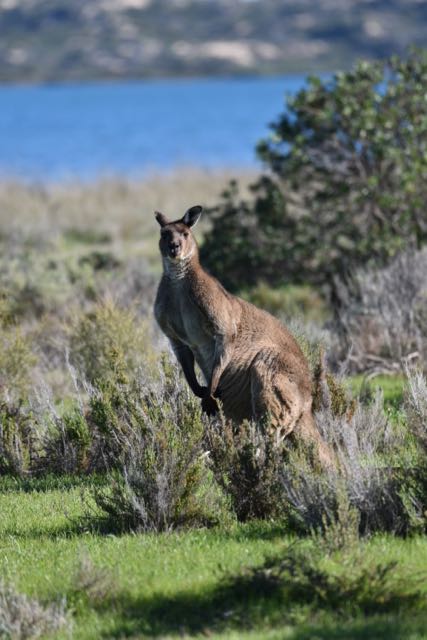 Prior to setting up we drove to the end of Pelican Point Road to Pelican Point itself.  You cannot travel any further from this point.  There is a locked gate which takes you on to Tauwitchere Barrage and Ewe Island Barrage.  The main purpose of the barrages is to maintain the freshness of the River Murray as far downstream as Wellington.

The name Coorong is believed to be a corruption of the local Aboriginal word kurangh, meaning “long neck”; a reference to the shape of the lagoon system.  The name is also thought to be from the Aboriginal word Coorang, “sand dune”, a reference to the sand dunes that form the Younghusband Peninsula which separates the Coorong from Encounter Bay in the Southern Ocean.  The park is 467 km2 and was established in 1966 as a sanctuary for numerous bird species. 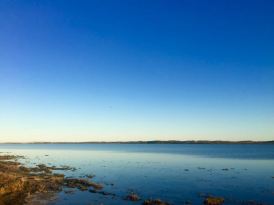 We set up just opposite the Salt Lagoon Islands Conservation Park.  It was very frustrating being that close, but not close enough.  We set up the fold up table and deck chair just a few metres from the water, and used the Yaesu FT-857d and the 40m/20m linked dipole for the activation.

As I had been to the Coorong many times before and well and truly qualified the park, Marija started off first.  The first contact in the log was with Rob VK4AAC/3 who was portable in the Mitchell River National Park VKFF-0321.  Marija then headed to 7.144 and commenced to call CQ and this was answered by Col VK5HCF in Mount Gambier with a beautiful 5/9 signal.  This was followed by Dennis VK2HHA, Mick VK3GGG, and then Les VK5KLV.  It wasn’t long before Marija had a little pile up going, and considering she is a brand new ham, I thought she did a splendid job.  The band was in very good shape and it wasn’t long before Marija had qualified the park with 44 contacts. 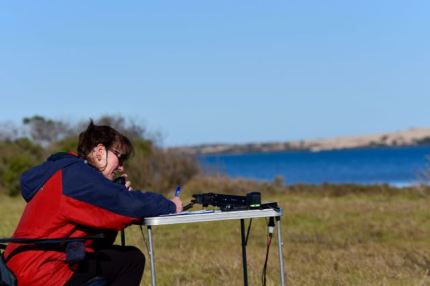 After Marija had fulfilled her quota, I jumped on to 40m, but my voice was far less appealing, and I scraped up 16 hunters on 40m.  I then headed to 20m and called CQ on 14.310 and this was answered by Mr. Reliable, Rick VK4RF/VK4HA.  This was followed by Greg VK8GM.  Greg and Rick kindly spotted me on the DX Cluster, parksnpeaks, and Facebook, and this no doubt resulted in a few calls from Europe.  But it was 4.00 p.m. local time and I think we had left our run on 20m a little too late.  I did manage to work Scott MM0LID in Scotland, Danny ON4VT and Luc ON4BB in Belgium.  Along with Martin VK6RC and John VK6NU. 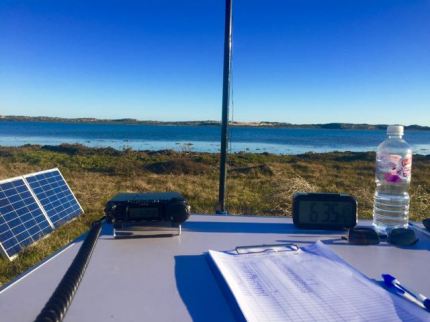 Despite the fact that we could not gain access to Salt Lagoon Islands Conservation Park, it had been a beautiful Saturday afternoon out in the sun, on the banks of the Coorong lagoon.  There was not a cloud in the sky and we were blessed with moon which was shining brightly in the afternoon sky.

The sun was starting to set so we packed up and headed back towards Narrung.

After crossing the ferry at Narrung, we took some time out to enjoy the sunset and the amazing views across Lake Alexandrina.  We could see the Mount Barker summit off in the distance (we live close to the summit). 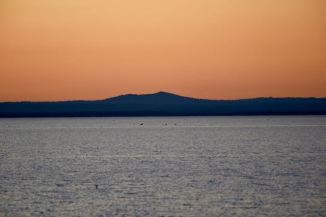 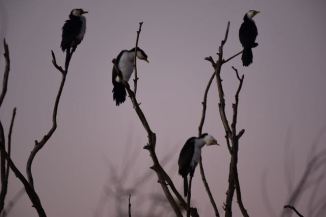 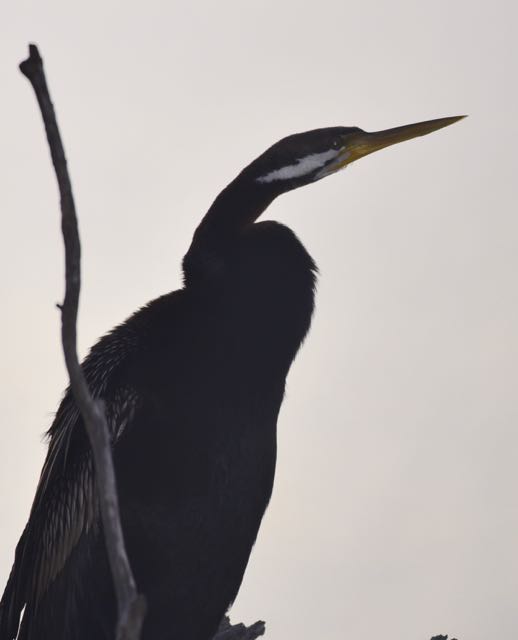 Marija ended up with a total of 46 contacts on 40m.

I made a total of 25 contacts.