I had three planned park activations for Wednesday 24th August 2016, the first of which was the Pelican Lagoon Conservation Park 5CP and VKFF-0926.  If successfully activated, it would be another unique park for me.

Above:- Map showing the location of the Pelican Lagoon Conservation Park on Kangaroo Island,  Image courtesy of Protected Planet.

After breakfast I headed into Parndana to refuel the 4WD.  It was a beautiful morning on Kangaroo Island.  Quite brisk but sunny and clear.  I had been very lucky in the past few days considering it was August.

Parndana is a small town and farming community, located in the middle of Kangaroo Island (KI).  It is around 40km west of Kingscote.  Parndana was established following World War Two, to support the Soldier Settlement Scheme on Kangaroo Island.  It was during 1948 that soldiers and their families commenced arriving on Kangaroo Island and settling at Parndana.  They occupied huts which had been brought to the area from a former internment camp.  As a result, by 1954, KI’s population had doubled due to 174 families settling in the Parndana area.

Nowadays Parndana services the farming community and has a school, general store, and service station.

Above:- the main street of Parndana.

I continued along the Playford Highway, stopping a few times to admire the view of the surround lush countryside, a combination of native scrub and cleared land for farming.  The Playford Highway was named in honour of Sir Thomas Playford, who was a South Australian politician.  He served continuosly as the Premier of South Australiaand leader of the Liberal and Country League from 5th November 1938 to 10th March 1965.

Above:- view from the Playford Highway.

Prior to heading to Pelican Lagoon I deviated into Kingscote, the largest town on KI.  I headed to the Island Beehive to purchase some honey and salad dressing for Lyn VK4SWE who lives on Sweers Island in the Gulf of Carpentaria.  Prior to leaving for KI I had promised that I would purchase this for Lyn as she had heard about the famous KI salad dressing which is produced on the island.

Not many people may know, but Kangaroo Island has a thriving honey industry.  And its mainstay is the Ligurian bee.  In fact, KI has the purest strain of Ligurian bee anywhere in the world.  Ligurian bees, compared to other bee species, are:

For more information on Ligurian bees, check out the following….. 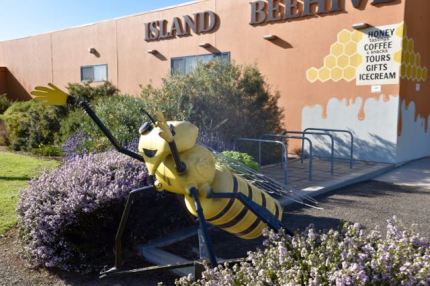 So after my brief stop at Kingscote, I headed out along Hog Bay Road towards Pelican Lagoon.

Pelican Lagoon Conservation Park is located on the Dudley Peninsula on KI and was dedicated on the 1s January 1967 for the protection of wildlife.  The park is 397 hectares (980 acres) in size and lies immediately to the south of American River, and about 25 km south east of Kingscote.  The park consists of land on the peninsula of the north side of the tidal inlet of Pelican Lagoon, and additionally five small islets within the inlet itself. Pelican Lagoon includes woodland, scrub and heath, as well as wetland vegetation.  It also adjoins samphire Mudflats,  providing habitat for several species of woodland and wetland birds and other animals. 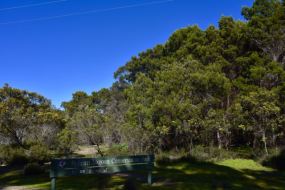 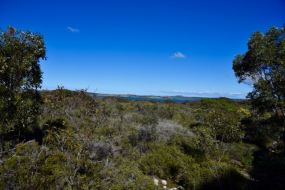 I turned off onto Island Beach Road and headed into the little settlement of Sapphiretown.  But I was really struggling to find anywhere to set up in the park.  There were very few options. I then headed along Mitchell Drive for a short distance and found a clearing in amongst the scrub.  But, and it was a big but, it had powerlines overhead.

I quickly set up and sure enough when I turned the Yaesu FT-857d on, the noise floor was a very annoying strength 8.  First in the log was Don VK3MCK who was 5/9 and above the noise, followed by Rick VK4RF/VK4HA and then William VK2NWB.  I could hear others calling but just could not pull them out of the noise.  So after just 4 contacts in the log and feeling extremely frustrated, I pulled down the station, and it was off to search for a new operating location.

After packing up I headed back into Sapphiretown but could not find a track leading down to the park.  So I headed back along Mitchell Drive, following the eastern boundary of the park.  There weren’t too many options as the scrub was so thick. 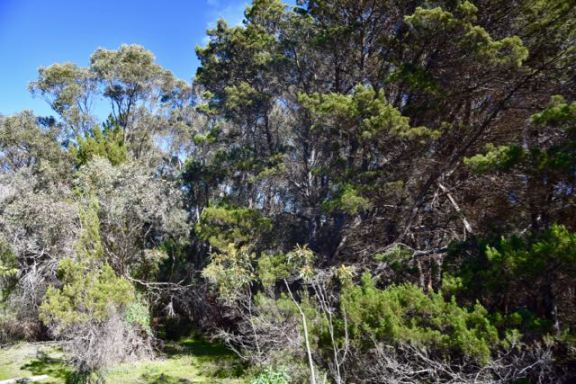 I eventually found a clearing in some scrub down towards the south eastern corner of the park.  This overlooked the lagoon, and there was enough room to string out the 20/40/80m linked dipole. 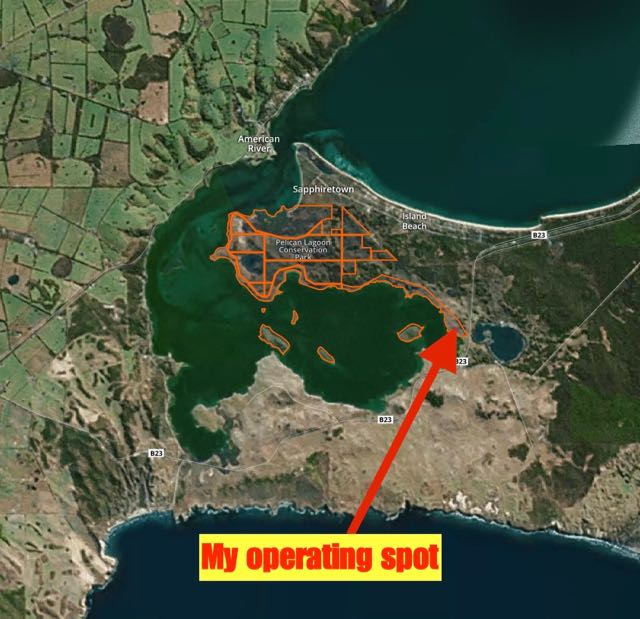 The noise floor here was non existant and it was a pleasure to be on air, compared to my previous spot.  First in the log here was Mike VK6MB with a lovely 5/7 signal from Western Australia.  This was followed by Tom VK3NXT, Cliff VK2NP and then Ken VK3UH.  Despite the band conditions being quite good, it was really slow going.  Peter VK3PF sensed this and came up to give me a few new call signs to add to the log: VK3KAI and VK3GV.  I logged stations from VK2, VK3, VK4, and VK6.  But it was clear that the close in propagation was not working well.  The only South Australian logged on 40m was Michael VK5FMLO in the southern suburbs (5/6 both ways).  One contact I was really amazed with though, was with Peter VK6APZ.  Despite it being the middle of the morning, Peter was a solid 5/9 to me and reciprocated with a 5/8 for me.

I headed off to 20m where I made a total of 4 contacts.  The first being with Mike VK6MB, then Rick VK4RF/VK4HA, and Peter VK6APZ, all of whom had followed me up from 40m.  It was interesting to note that the VK6 signals were down in signal strength on 20m compared to 40m.

I then lowered the squid pole and inserted the links and it was off to 3.610 on 80m.  Adrian VK5FANA on the Yorke Peninsula was the first to call in with a strong 5/8 signal.  Adrian advised that he could not hear me on 40m and was hoping that I would come up on 80m.  Next up was David VK5PL from the Barossa Valley who was 4/3 (5/7 received), followed by Mick VK3GG/VK3PMG in western Victoria (5/3 sent & 3/3 received).

A number of the South East amateurs then called in, including John VK5DJ who was 5/9, followed by Tom VK5EE, Col VK5HCF, and Brian VK5FMID.  Sadly Col was suffering from noise at his home qth and just could not quite pull me through.  I was hearing Col very well…5/5….but I was in a noise free location.  Despite numerous attempts in me counting out the signal strength, Col just couldn’t quite get me.  And then, unfortunately, another VK5 came up and relayed the signal report.  That was the end of the contact with Col.  It made any contact void.  Please do not relay signal reports!  You may think you are doing the right thing, but you are not.

Brian VK3MCD called in from SOTA peak Albion Point VK3/ VE-080 with a very nice 5/7 signal, with Brian giving me a 5/9.  My final contact from pelican Lagoon was with Marc VK3OHM.  So after a very shaky and then slow start, I had qualified the park, and had a total of 45 contacts in the log.  It was off to Lashmar Conservation Park.

Thankyou to the following who spotted me on parksnpeaks, Facebook, Yahoo group, etc.  It really does help.