This year the Belair National Park turns 125, and as part of these celebrations, an Open Day was held at the park on Sunday 11th September, 2016.  My good friend John VK5BJE was approached by the Senior Ranger for the Mount Lofty Parklands, asking if he would be interested in setting up an amateur radio station in the park as part of the Open Day.  John kindly invited myself and my wife Marija VK5FMAZ, to come along and participate.

Above:- Aerial shot showing the location of the park to the south east of the Adelaide CBD.  Image courtesy of Protected Planet. 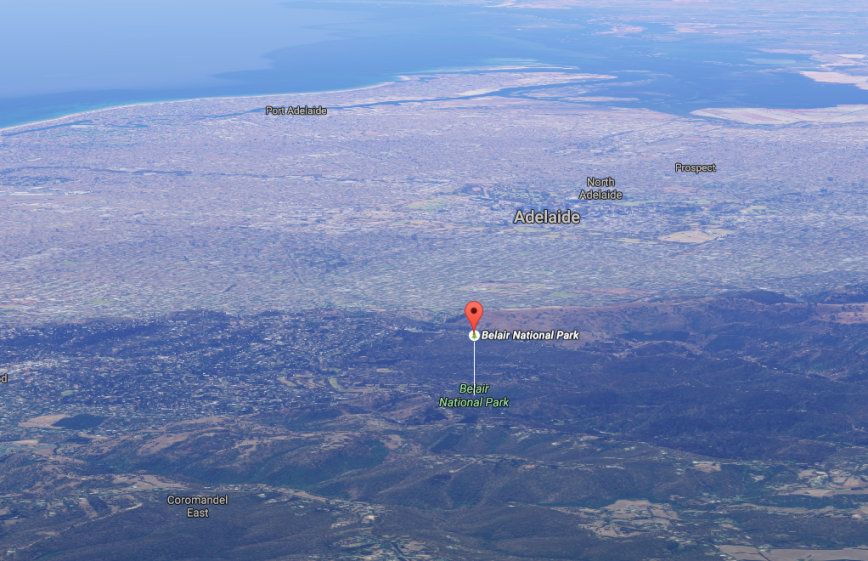 Above:- location of the park with respect to Adelaide.  Image courtesy of Google maps.

Nicholas Foott was the first European known to have settled on land that is today the Belair National Park.  He squatted in a rent free building known as Manning cottage, to which he added several stone out buildings, on the priviso that he would move if the land was sold.  In fact, this location was just a stone throw from where we would set up at Belair.  Foott was given notice to quit in July 1840 as Governor Gawler had made the decision to set up a farm for the purpose of growing hay for police horses and other Government livestock. 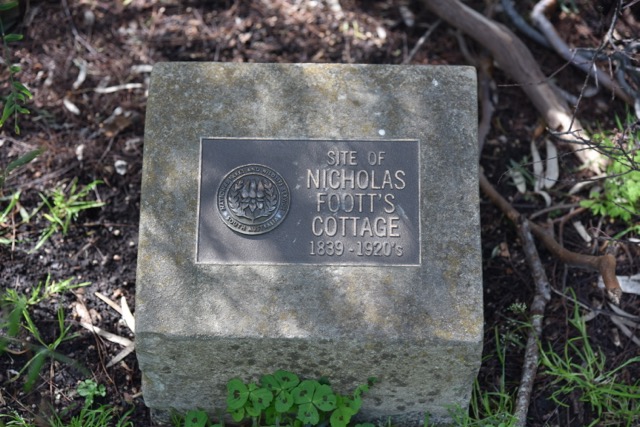 This however, did not take place, and during the 1842-1982 depression, a few dozen unemployed men and their families were given permission to settle temporarily in the area.  In June 1844, about 400 acres of land, comprising four sections at the western end of the farm were sold.   In 1848 a cottage was erected alongside the creek as a residence for the farm manager, and for occasional use by the Governor.  Sadly, this cottage has long been demolished.

In 1858 a residence, complete with swimming pool, was built as a “summer house” for Sir Richard MacDonnell, the Governor of South Australia.  This was used by his successors until the more imposing building at Marble Hill was completed. 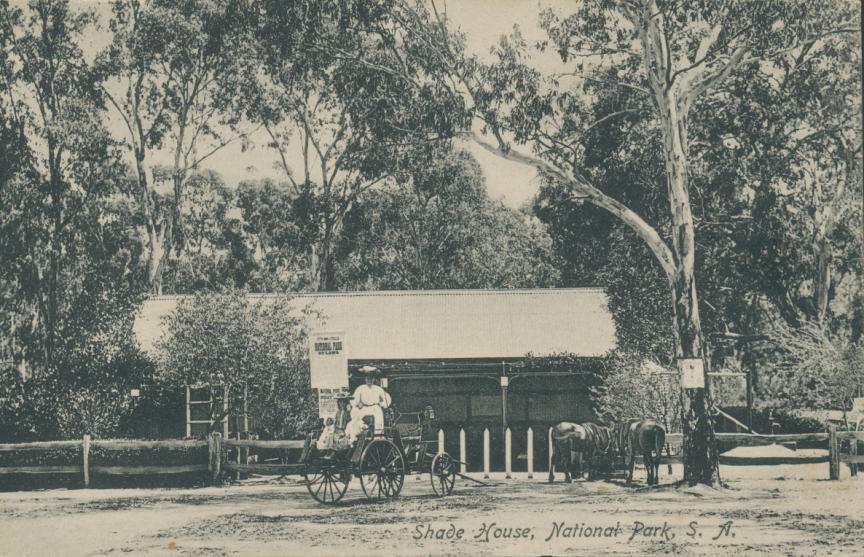 Photographs above courtesy of Trove

During 1866/1867 summer, and again in 1877, large bushfires spread through the area, which resulted in the destruction of numerous beautiful old trees.

During 1881 a number of proposals were put to sell off parts of small portions of the Government farm.  These were opposed by Walter Gooch, James Page and the Australian Natives Association.  Such was the opposition that in 1883 it led to an Act of Parliament prohibiting the sale of the land. In 1888 further agitation by Gooch, A. F. Robin and Samuel Dixon of the Royal Society o South Australia, led to a parliamentary decision that the Government Farm be established as a public park.  After some delays the National Park Act received the Governor’s assent in January 1892. 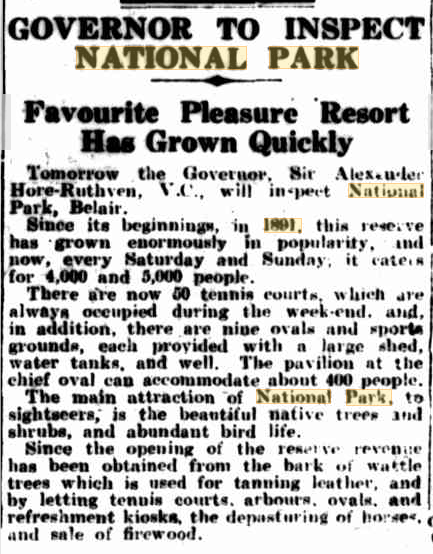 Due to its historical connections with early European settlement of South Australia, the park contains a combination of European plants and native vegetation.  Many of the native plant species located in Belair are listed as endangered or vulnerable.  Early colonial plantings in the park resulted in clearing of native woodland areas.

During the early years of the park, management needed to develop the park as a financially viable recreation ground.  Considerable efforst were directed towards encouraging visitors.  From 1890 to 1920 a tree planting committee was formed to make the park more attractive.  For nearly 30 years, exotic trees were proudly planted in the park.  During this era, park managers had little appreciation of native flora.  Attiudes commenced to change by the 1920’s and exotic tree planting ceased.  Many of the trees planted in the 1800’s are still growing.  While they have historic value as a reminder of the park’s colonial heritage, they may not be replaced when they die.

There is a lot to see and do in the park.  The pines located outside the old pavillion date back to 1895.  They include Bunya pine, Norfolk Island Pine and Hoop Pine.

The tree in the photo below is a Thick-skinned Cork Oak.  It was one of several planted in the park during the 1900’s.  It is one of the finest specimens located in South Australia.

Old Government House in the park can be visited during opening times. 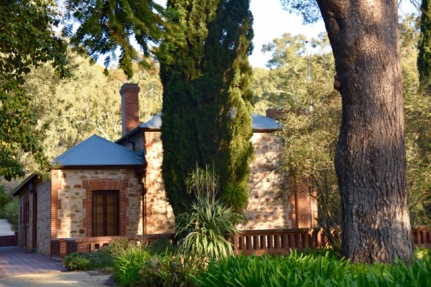 In the eastern section of the park, you can view a number of plantings, made to honour servicemen and women. 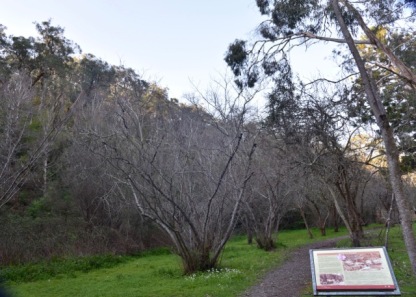 John had made an early start and was at the park by 2200 hrs UTC (7.30 a.m. South Australian local time), with Marija and I arriving just before 8.30 a.m.  We set up near the Adventure playground off The Valley Road in the park. 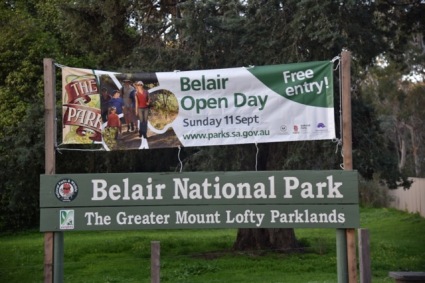 Even though it was only early, there was already a lot of activity in the park.  Not surprising really, as it was a magnificent sunny day, after three very ordinary preceeding days of rain and strong winds. 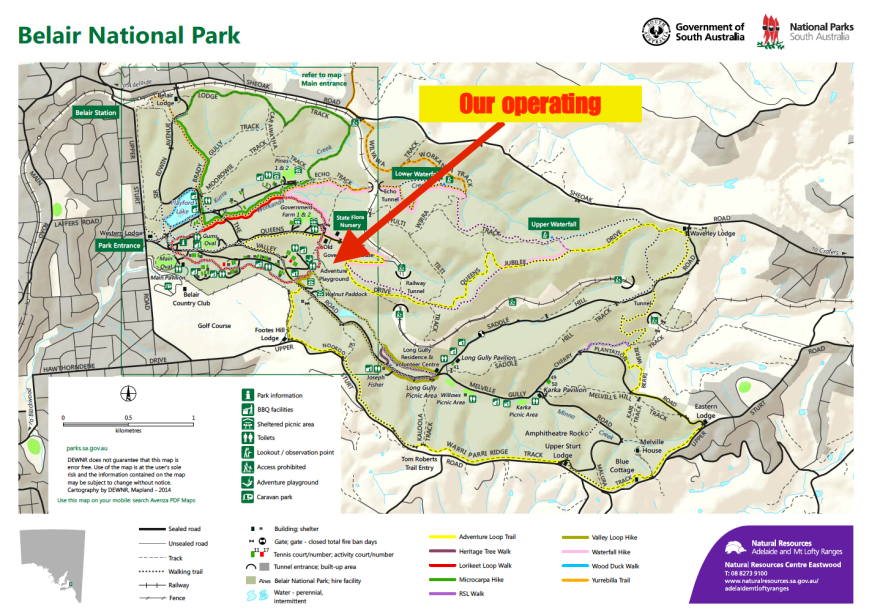 Above: Map showing our operating spot within the park.  Map courtesy of Environment SA.

John’s station comprised a Yaesu FT-857d, a linked dipole which was supported on a 10 metre squid pole, and dual band 2m/70cm antenna mounted on an aluminium post.   As it was a nice sunny day, John had the solar panels out which helped top up the 33 amp hour battery.

The second station set up by myself and Marija consisted of a Yaesu FT-857d, a 20,/40m/80m linked dipole supported on a 7 metre squid pole (inverted vee), powered by a 44 amp hour power pack. 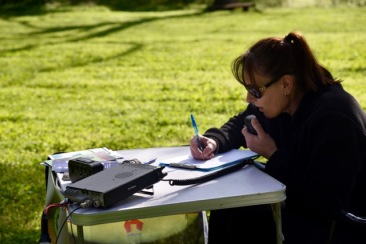 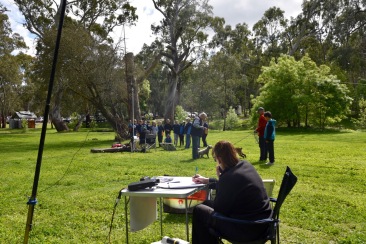 In close proximity to our operating spots is the Commissioners shack, which was built in 1926 for the park blacksmith.  It measured 12 feet X 10 feet.  However in 1934, the Park’s Commissioners added another room to the structure, along with a verandah and fireplace.  It was then used by the Commissioners as a weekend shack. 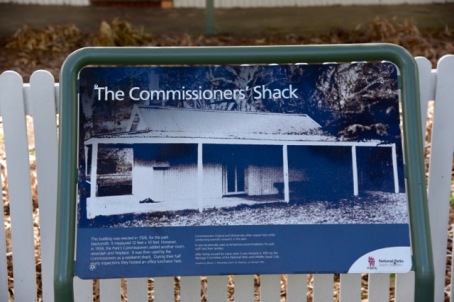 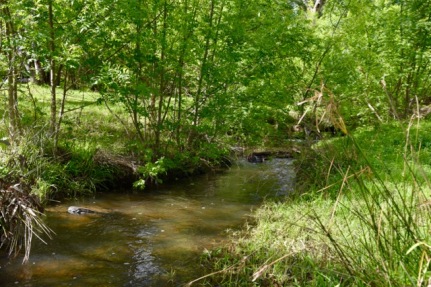 During the day we had quite a bit of interaction with the public.  People approached us, asking us inquisitively what we were doing.  We had a scout troop come over and John explained to them the amazing hobby of amateur radio.  We also had a few brave souls (children and adults alike) pick up the microphone and say hello to some interstate and local amateurs.   A number of promotional brochures re the hobby and the parks awards were handed out during the day.

John VK5BJE being watched on by the Guides

Paul VK5PAS discussing the hobby with some interested onlookers 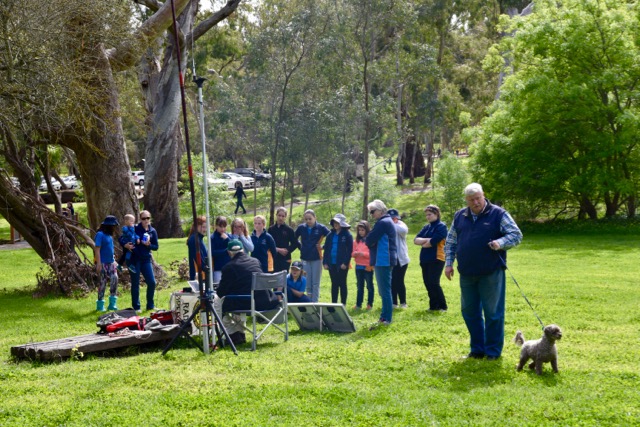 The park was alive with wildlife.  This included some very noisy Sulphur Crested Cockatoos who kept us entertained during the day.  We also had a koala perched high atop a nearby gum tree. 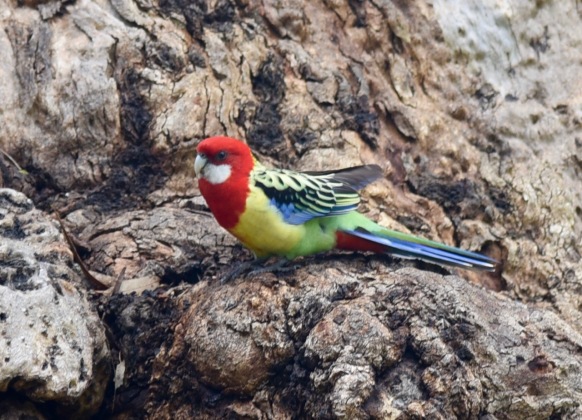 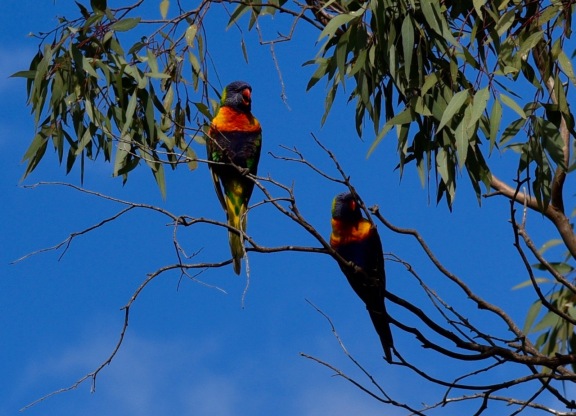 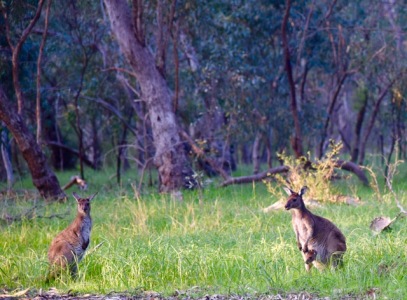 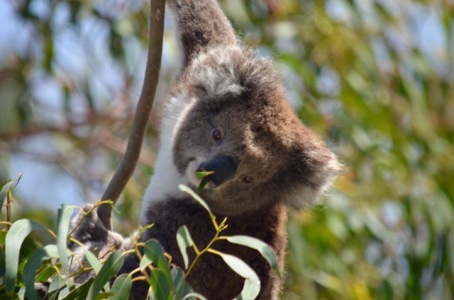 Our last contact of the day was with Rob PA3GVI in the Netherlands.

A few of the highlights of the day for me were:-

More information on the day can be found at John’s WordPress site at….. 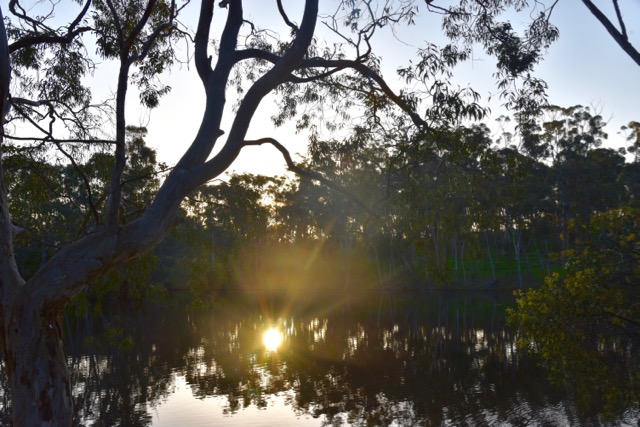