Bright and early on Good Friday morning (21st April 2017) my wife Marija VK5FMAZ and I, left home headed for the Riverland region of South Australia.  We had booked in to stay three nights at Renmark, with our main reason for heading to the Riverland, to attend the BRL Gathering at the historic Overland Corner Hotel.  The BRL Gathering is held each year and is organised by the Riverland Radio Club.

Marija and I had planned to activate one park on our way up on Friday, the Ramco Point Conservation Park 5CP-193 and VKFF-0930.  The park is situated about 180 km north east of Adelaide, and is located just to the north west of the town of Waikerie.

I had activated Ramco Point back in April 2015 as part of the VK5 National & Conservation Parks Award.  But this was prior to Ramco Point being added to the World Wide Flora Fauna (WWFF) program, so this was to be a unique park for WWFF for both Marija and myself. 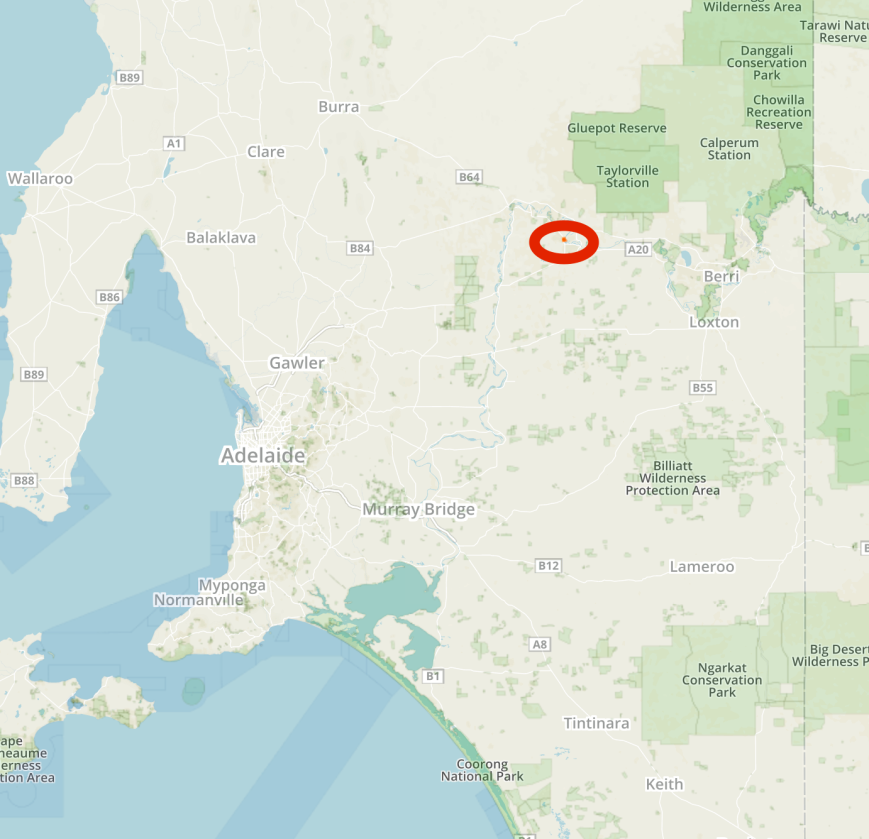 Map showing the location of the Ramco Point Conservation Park in the Riverland region of South Australia.  Map courtesy of Protected Planet.

It is a 2 hour drive from our home in the Adelaide Hills to Waikerie.  Our drive took us out through Woodside and Birdwood and on to Mount Pleasant.  We then travelled along the Angas Valley Road, admiring the view of the surrounding countryside as we left the hills and down to the eastern flats of the Mallee.  We then travelled north on Ridley Road, passing through the towns of Cambrai and Sedan until we reached the Sturt Highway.  We then travelled east towards Waikerie, passing the Brookfield Conservation Park, and crossing the mighty Murray River at Blanchetown.

The Ramco Point Conservation Park was proclaimed in June 2006 and is located just to the north of Ramco Lagoon, on the southern side of the Murray River.  The little town of Ramco is located nearby.  Today the town has a population of about 200 people and just a Post office, Lutheran church, a total hall and a school.  The current town of Ramco waas surveyed in 1940, however there was an earlier Ramco village which was founded in July 1894 by 18 disgruntled settlers from the Waikerie village settlement.

Ramco originates from the aboriginal word ‘Bogorampko’.  The word ‘bogo’ means dead, a spirit or a giant from mythology and ‘rampk’ means going towards or referring to the route used by mythical creatures to get to the river for water at night.  It was an aboriginal belief that there was a class of beings, Bogo, who lived at Bogorampko.  They were considered large and human-like and had the power of invisibility.  The Bogo were thought to come to the Murray River at night from the inland scrubby country to get water and inflict sorcery.

The road into the park, Ramco Point Road is initially bitumen, but then becomes dirt.  Last time we were here at Ramco back in 2015, there had been a lot of rain, making the track very boggy.  And on this occasion it was no different.  There had been quite a bit of rain overnight, and the track was very slippery and boggy in parts. 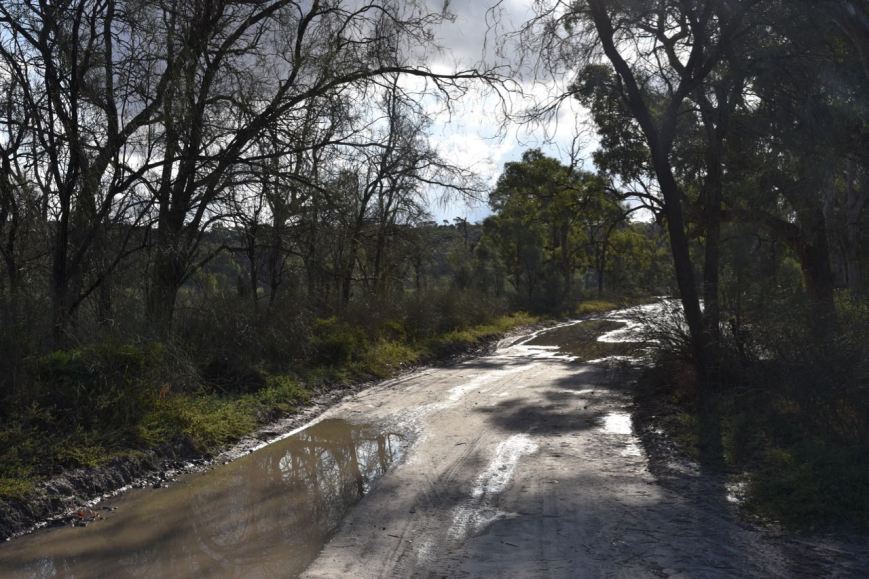 The first section of Ramco Point Road.  It was wet but was easily passable.

There were a number of caravaners alongside the Murray River who had obviously been there prior to the rain.  By the time we had passed Ramco Lagoon, the track had become extremely slippery and boggy.  Although it didn’t look bad, the soil here alongside the river, once wet, becomes quite treacherous.  Fortunately we had been able to get inside the park boundary.

The section close to the park boundary.  A little more tricky.

As you can see from the photo below, even though we have light truck tyres on the Toyota Hi Lux, the mud was not being dispersed from the tread.  It was very sticky.

Marija and I found a small clearing on the western side of Ramco Point Road, right alongside the Murray River.  We set up the deck chairs, the fold up table, and ran the Yaesu FT-857d at 10 watts PEP, and the 80/40/20m linked dipole, supported on the 7m telescopic squid pole.  We had the shade of a large gum tree, which was welcome as it was a warm 26 deg C and very humid.

Marija started off on air first, calling CQ on 7.140.  The first station in the log was Greg VK4VXX/2 with a very strong 5/9 plus signal.  Les VK5KLV in Port Augusta followed, with an equally strong signal, then Ken VK2KYO, followed by Bill VK4FW.  Marija had contact number 10 in the log after being on air for 14 minutes.  The honour of the 10th contact and thus qualifying the park for Marija for VKFF, went to Les VK3FLES.

As we were pushed a little for time, Marija handed over the mic to me after making a total of 11 contacts into VK2, VK3, VK5 and VK7.  Marija was happy that she had qualified the park for VKFF, and I was hoping to pick up my 44 contacts to qualify the park for the global WWFF awards. 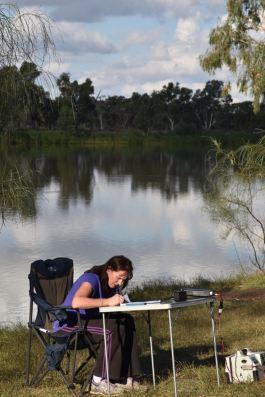 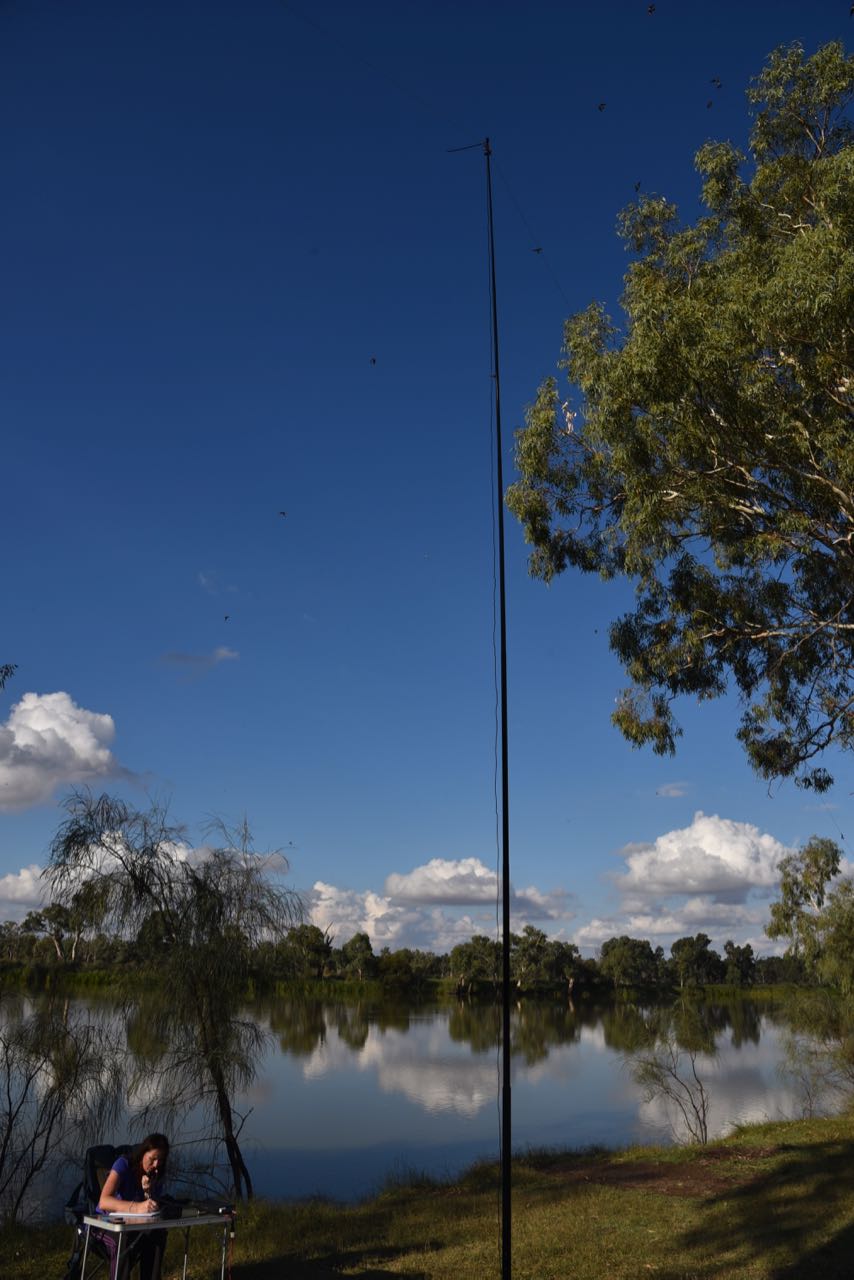 Whilst operating, we were kept company by literally dozens and dozens of Welcome Swallows who were flying around the gum tree alongside of us.  It was quite a sight (as you can see in the video at the end of this post).

We almost had to get the vehicles snatch straps into action, as a couple in their Mazda BT50 decided to go a little further along the track and very nearly got bogged.  Fortunately they made their own way out safely.

Welcome Swallows by the dozens

The antenna with the swallows in the background

I called CQ on 7.140 and this was answered by Les VK5KLV, followed by Ken VK2KYO and then Fred VK3JM.  All had very strong 5/9 + signals.  Sadly I soon started to experience QRM from a ZL station on 7.138 who was chatting to friends in the UK.  The bleedover was extremely bad, so I apologise to those who may have been calling that I could not hear.

Contact number 10, qualifying the park for me for VKFF, was with regular park hunter Rick VK4HA.  Soon after I was called by Ken ZL4KD/p who was portable in the Okarito Conservation Area ZLFF-0034 on the South Island of New Zealand.  Ken was quite low down, and copy was made worse by the QRM from 7.138.  I moved up to 7.142 and away from the QRM, where I comfortably worked Ken and his wife Margaret ZL3YF/p, Park to Park (P2P).  Unfortunately Marija had gone for a walk to take some photos so she missed out on the New Zealand Park to Park opportunity with Ken and Margaret.

Fortunately I had a steady flow of callers and I soon reached 20 contacts, and then 30.  Although by contact number 39, callers had slowed down.  Band conditions on 40m were very good, with QSOs being logged into New Zealand, VK2, VK3, VK4, VK6 and VK7.  Other than Les VK5KLV, there were no South Australians logged by me, with close in propagation not working on 40m SSB.  Additional to the P2P contact with Ken and Margaret, I also logged a P2P contact on 40m with Hans VK6XN/p who was in the Bramley National Park VKFF-0636 in the south western region of Western Australia.  Hans was a good 5/5 and reciprocated with a 5/7 for me.

I then headed to 14.310 on the 20m band and called CQ.  This was answered by John VK6NU in Western Australia.  Signals from VK6 on 20m have been quite low of late.  And today was no different, with John’s signal being 5/4 (5/3 received).  Steve VK4QQ then called in with a strong 5/8 signal, followed by Phil VK6ADF and then Mark VK4SMA.  But despite 5 minutes of further CQ calls, I had no further callers on 20m, leaving me on 43 contacts.  Just 1 QSO short of qualifying the park.

I then moved to 3.610 on the 80m band and called CQ which was answered by Laurie VK2GZ, my 44th contact, qualifying the park for WWFF.  I then worked Jim VK3UFO who was out gold prospecting near Bendigo, followed by Hans VK5KHZ/p who was at Thiele Flat near Mannum.

I had a total of 46 contacts in the log and a new park qualified for WWFF.

After packing up, we stopped off briefly at Ramco Lagoon to take some photographs of the waterbirds including Herons, Spoonbills, and Plovers. 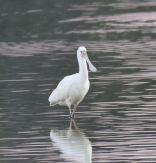 We also enjoyed a quite spectacular sunset.  On our way back to the motel we both worked Hans VK6XN, from the mobile.  Hans was in the Bramley National Park VKFF-0636.

Below is a short video of the activation, showing the Welcome Swallow activity…..

Jennings, John T,  2009, ‘Natural History of the Riverland and Murraylands’