Bright and early on Thursday morning, 6th April 2017, I hit the road, on my way to Ballarat in western Victoria.  My ultimate destination was Foster, south east of Melbourne for the Antennapalooza event.  But as Foster was 870 km away, I had planned to stay overnight at Ballarat, and then drive down to Foster on Friday morning.

I had one planned activation for the day, and that was Mount Buangor State Park.  But all good plans are made to be broken, and I decided to activate SOTA summit One Tree Hill VK3/ VS-036 which is located in the Ararat Regional Park VKFF-0958.

Above:- Map showing the location of One Tree Hill in western Victoria.  Map courtesy of Google maps.

After a 7.00 a.m. start, I stopped off briefly at Coonalypn for a coffee at the newly opened Silo cafe on the Dukes Highway.  This is about 200 km south east of Adelaide.  It was also an opportunity to view the newly completed artwork on the adjacent 30 metre high silos.  This fantastic artwork is the product of Brisbane based artist Guido van Helten. He has imortalised five local Coonalpyn Primary School children on the silos.

For more information check out this link to the ABC News website which includes some time lapse video of van Helten at work….. 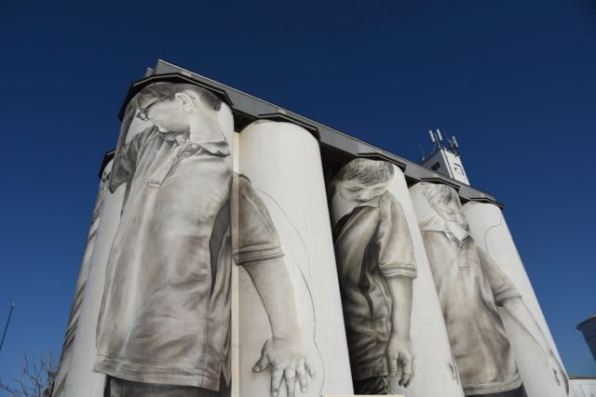 I continued on, a further 360 km to the west, crossing the South Australian/Victorian border, until I reached the town of Ararat.  It was 1.30 p.m. Victorian local time, and I had just a further 93 km to go until I reached Ballarat.  So I decided to activate One Tree Hill, which is a nice easy drive up summit for Summits on the Air (SOTA).

One Tree Hill is 569 metres above sea level and is worth 2 SOTA points.  The summit has been activated a total of 12 times by SOTA activators from VK3 & VK5.  I myself have activated the summit four times before.  The first being back in 2013.

One Tree hill is located on the north western outskirts of the town of Ararat.  I followed Picnic Road and then One Tree Hill Road and soon reached the Ararat Regional Park sign which has come under attack by local vandals.

Ararat Regional Park comprises three separate, easily accessible blocks.  The Ararat Hills block, which consists of 820 hectares, offers panoramic views from Pioneers Lookout and has a rich gold mining history.  Dunneworty block is 2,670 hectares in size and is made up of gentle terrain to the north.  While Bradys block is 180 hectares in size and has rich Ironbark forests.  The summit is located in the Ararat Hills block.

The park is home to more than 200 native wildflower and other plant species, including 34 species of small delicate native orchids.  Victoria’s Box-Ironbark forests once covered 3 million hectares.  Sadly these forests and woodlands were cleared by early settlers for agriculture, gold mining, urban development and timber.  Today, only 17% of the original area of Box-Ironbark vegetation remains.

A significant amount of native wildlife can be found in the park incuding the Peregrine Falcon, the threatened Powerful Owl, and the vulnerable Brush-tailed Phascogale, which is a small carnivorous mammal.  Other native animals found here including Western Grey kangaroos, wallabies, Echidnas, Brush-tailed possums and Sugar gliders.

Gold was discovered at Ararat in 1857, and relics of this gold mining era are evident in the numerous shallow mine shafts, a mining dam and water-races in the Ararat Hills.  Ararat’s Gum San Chinese Heritage Centre gives an insight into the area’s goldmining. 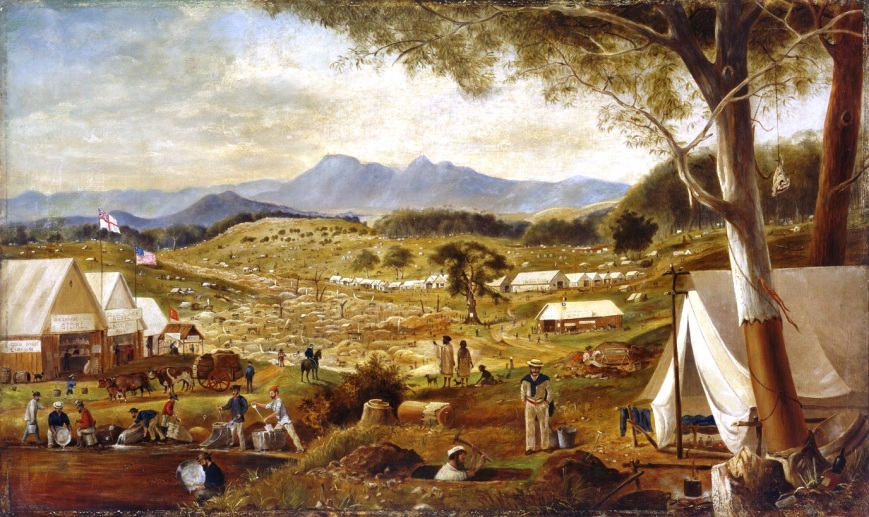 I followed the road up passed the telecommunications tower and on to the lookout.  In just under 2km the One Tree Hill Road climbs nearly 200 metres.  There are some sensational views to be enjoyed here of Ararat township, the Grampians National Park, and the Pyrenees mountains.  Enjoy the views here, as the views from the summit itself are shrouded by the trees. 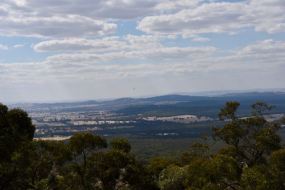 However, the lookout carpark is technically NOT the summit.  You need to continue along the 4WD track and head north.  The track is quite washed out in many parts and I would not recommend you trying to negotiate it without a 4WD.  If you decide to walk, it is a short walk along the track until you reach the official summit point, One Tree Hill.  A little further up the track is Snake Hill, which interestingly is marked on some maps as being 579 metres, 10 metres higher than One Tree Hill.  And a little further to the north is Napolean Hill.

I’m not sure of the origins of the name of the summit, but there is definitely more than one tree on the summit.

As this was an easy drive up summit, I had the luxury of the fold up table and deck chair.  I could also use the 44 amp hour power pack and run a little extra power, 40 watts from the Yaesu FT-857d.  I used my normal antenna, the 80/40/20m linked dipole, inverted vee, supported on the 7 metre telescopic squid pole.

I had telephoned John VK5BJE just before reaching Ararat to let him know that I was going to be on the summit and he had kindly spotted me.  So it was pleasing that John was the first in my log, with a lovely 5/9 plus signal from the Adelaide Hills.  Interestingly, John was number one in my log the last time I activated One Tree Hill.  This was followed by SOTA & Parks guru Peter VK3PF, and then Bob VK5AFZ at Goolwa, south of Adelaide.

As it was a weekday, there was not a mad pileup, but more than enough callers for me to qualify the summit.  Contact number four was with Nev VK5WG in the Mid North of South Australia.  I went on to work a total of 16 stations from VK2, VK3, VK5 and VK7.  This included a Summit to Summit contact with Phil VK2JDL who was activating SOTA peak Mount Elliot VK2/ HU-093, which is situated near Gosford in New South Wales.

I then lowered the squid pole and removed the links and headed off to 14.310 on the 20m band where I started calling CQ.  This was answered by John ZL1BYZ in New Zealand with a good 5/5 signal.  Sadly, John was my only caller on 20m.

So it was away with the gear and back on the road, heading east towards Ballarat.

I worked the following stations: