My final activation for the day was to be the Mount Boothby Conservation Park 5CP-144 & VKFF-0913.  Although I had activated this park previously, back in January 2015, this was prior to the park being added to the World Wide Flora Fauna (WWFF) program.  So this was to be a unique WWFF activation for me.

Mount Boothby is about 180 km south east of Adelaide, and around 14 km west of Culburra.

Mount Boothby Conservation Park is about 4,045 hectares in size and is the fourth largest area of remnant vegetation in the Upper South East region.  The park supports at least 2 species of conservation significance, namely the metallic Sun-orchid and the Mallee Fowl.  The topography in the park consists predominantly of undulating limestone ridges which are overlain with sand.  These vary in height from 20 to 120 metres above sea level (ASL).  Granite outcrops occur on the dune sides.  The most prominent of these is Mount Boothby which rises to 129 metres ASL.   The two major vegetation types in the park are open woodland and open heath.

Aerial shot of the Mount Boothby Conservation Park with the towns of Coonalpyn, Ki Ki and Yumali in the background.  Image courtesy of Google Maps 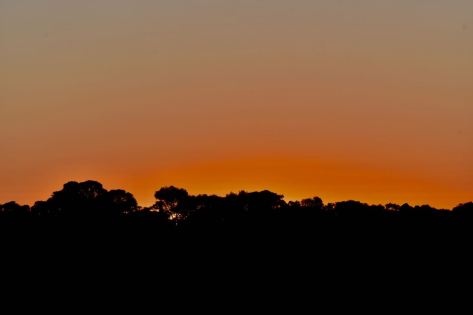 Richardson Road shows up on maps and I was expecting a dirt road.  Instead, Richardson Road travels in between 2 sections of private property, leading to the western side of Mount Boothby.  It is in fact a sandy track leading up to the park.  You could traverse this with a conventional vehicle, but only with great care.

Richardson Road leading to the western side of the park

After travelling around 3.5 km along Richardson Road I reached the north western corner of the park. 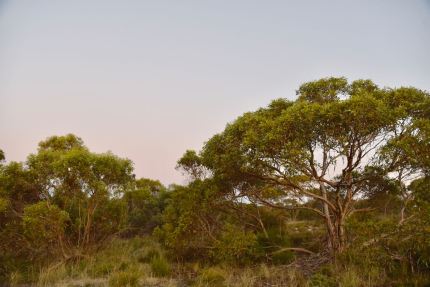 I pulled up on a sandy track following the western boundary of the park and set up.  I ran my normal portable station – Yaesu FT-857d, 40 watts, 80/40/20m linked dipole on 7m squid pole. 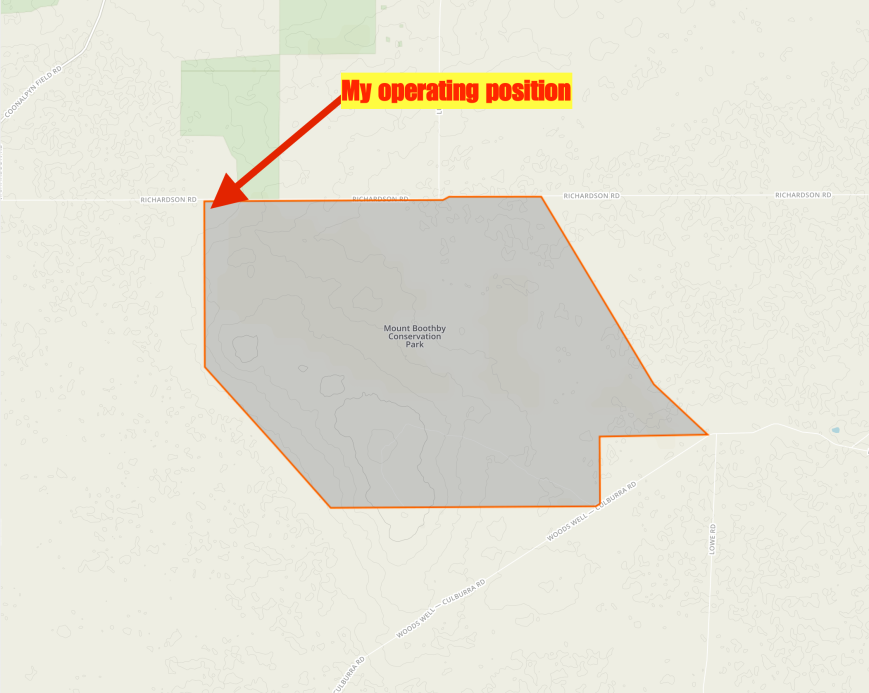 My operating spot in the north western corner of the park.  Image courtesy of Protected Planet.

As it was getting dark, the temperature had dropped dramatically.  It was now 7 deg C.  But as I wanted to activate the park under the VK5 National & Conservation Park Award rules, I needed to be autonmous from the vehicle.  So I rugged up to keep warm.  I had very spotty internet coverage in the park so I was unable to spot myself.  I headed to 7.144 on the 40m band and started to call CQ.  My first taker was Gerard VK2IO who started off at 5/9, but within an over had almost completely disappeared.  This was followed by Owen VK4FADW who was also experiencing severe fading, and then Adam VK2YK who was a strong 5/9 and reciprocated with a 5/9 for me.  Sadly I was to log just 2 further stations on 40m…Chris VK4BX and finally Peter VK3PF.  Numerous CQ calls went unanswered.  This was not looking good.

I decided that I was wasting my time on 40m and headed to 3.610 on the 80m band.  My first station worked there was Peter VK3PF who was a solid 5/9, much stronger than on 40m.  I then worked Marija VK5FMAZ, Ian VK1DI, Cliff VK2NP and Adrian VK5FANA, all with strong signals.  The 80m band looked as though it was going to provide much better results than 40m.

I was really pleased to hear a constant flow of callers on 80m, and it wasn’t long before I had 20 QSOs in the log, and then 30 QSOs.  It looked as though I might make my target of 44 QSOs afterall.

The temperature was constantly dropping.  From an initial 7 deg C, down to 4 deg C in 20 minutes and then down to 2 deg C in another 10 minutes time.  It wasn’t long before the temperature was 0.2 deg C.  I was very keen to get my 44 contacts and leave the park.

Contact number 44 came within 90 minutes of being on air at Mount Boothby, and that was with Eugene VK3FEUG.  I was very happy to have reached 44, with the majority of those contacts on the 80m band.  I was also pleased to have 2 Park to Park contacts, with Mark VK3KMF/8 in the Iytwelepenty/Davenport Ranges National Park VKFF-0133, and Chris VK3CJD/p in the Wilsons Promontory National Park VKFF-0956. I had a total of 49 stations in the log and I was absolutely freezing.  It was time to pack up and head for home, with a 90 minute drive ahead of me.  I had qualified the park in its own right on 80m, which I never expected to do.