The park is located a few km south of the little town of Ashbourne and about 60 km south of Adelaide.

I last activated this park back in August 2016 shortly after it was added to the World Wide Flora Fauna (WWFF) Directory.  For information on that activation please see my previous post at….

The Cox Creek Conservation Park was established on the 11th day of November 1993 and it 21 hectares (52 acres) in size.

The majority of the adjacent Conservation Park was previously owned by the late Mr V Cox of Ashbourne, who preserved the area in a natural state for overwintering his honey bees.  The land was purchased from Mr Cox in 1969 on condition that he was allowed to keep bees in the park for as long as he required, which was upheld until he passed away.

A fire swept through this area back in December 2016 and burnt around 70 hectares including this park.  The fire had threatened nearby properties and is believed to have started after a 4WD became bogged and sparked a grass fire.

Aerial shot showing the park in relation to my home QTH

A large amount of native birds can be found in the park including the Beautiful Firetail and the Elegant Parrot.

Although quite small, the park preserves a remnant piece of Fleurieu Peninsula bushland. 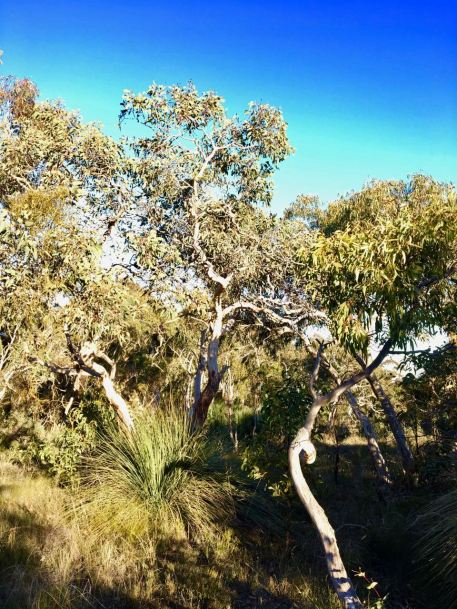 If you plan on activating this park, then keep your eyes peeled because getting in there can be tricky.   The park is not signposted.  The park is located on the eastern side of the Bull Creek Road, and a little south of the Conservation Park.  There is a small break in the scrub towards the southern end of the park, with a track leading in through the scrub.    There is an old sign here which says ‘No Hunting.  Trespassers Prosecuted”.  The writing is very faded and I expect it was there when the land was privately owned.  There is also another wooden sign which has fallen over, with nothing visible written on it.

If you travel along a little further to the south you will come to a dirt driveway and a sign which says ‘Tooper Springs’.  A very short distance along this track is a track darting off to the left, heading north through the park.

This track follows the eastern boundary of the park and eventually meets up with the other track.

There is a nice clearing where the track meets, with plenty of room for me to string out the 80/40/20m linked dipole.  It was a beautiful sunny afternoon, with the temperature being about 18 deg C.

Aerial shot of the park showing my operating spot towards the southern section.  Image courtesy of Google Maps

Prior to calling CQ I worked Gerard VK2JNG/p on 7.144, who was activating the Goonoo National Park VKFF-0590.  I then headed down the band to 7.130.  It was quite difficult to find a clear frequency as the 40m band was alive with VK’s, ZL’s and Europeans.  Marija VK5FMAZ was first in the log on 7.130 with a 5/5 signal.  Not all that strong, but at least there was some local propagation.  I then logged Dennis VK2HHA, Chris VK3PAT, and then Joe VK3YSP/m and Julie VK3FOWL/m who were mobile on their way home to Melbourne from GippsTech.  Next up was Peter VK3ZPF/p who was activating the Werribee Gorge State Park VKFF-0775.

A dozen or so QSOs later I had another Park to Park in the log, this time Ian VK5MA/6 who was in the Stokes National Park VKFF-0468.  Considering the time of the day on 40m and the distance between us (some 3,000 km), Ian had a beautiful strong 5/8 signal, with Ian giving me a 5/7 into Western Australia.  Then 6 QSOs later I had another VK6 park activator in the log, Hans VK6XN/p who was operating portable in the Gooseberry Hill National Park VKFF-0210 (5/7 both ways).  This was followed by Peter VK3PF/p who was activating the Corner Inlet Marine & Coastal Park VKFF-1768.

The band was in good shape and there was a continual flow of callers from all across Australia.  My 6th Park to Park contact for the activation came in at contact number 44, with Mark VK4SMA/p who was in the Mount Perry Conservation Park VKFF-1609.  I logged a total of 48 stations on 40m from VK2, VK3, VK4, VK5, VK6, & VK7. 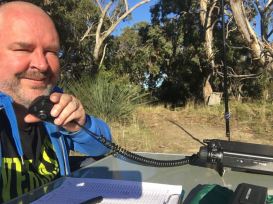 I then headed off to the 20m band and started calling CQ on 14.305.  Fred VK4FE was first in the log, followed by Hans VK6XN/p in the Gooseberry Hill National Park.  It was nice to get Hans in the log, Park to Park, on a second band.  But despite 5 minutes of further CQ calls, I had no further takers.

I was very pleasantly surprised considering the time of the day with the number of callers I had on 80m from VK3, VK3, VK4, VK5.  I logged a total of 24 stations on 80m.  One of my contacts was with Anthony VK3LPG in western Victoria who commented that I must be running out of parks to activate.  In between overs I heard a voice say ‘he hasn’t done Butchers Gap’.  It was Tony VK5ZAI at Kingston in the South East.  The Butchers Gap Conservation Park backs onto Tony’s property.

The property had rapidly started to drop, from 18 down to 9, then to 7, and then to 6 deg C.  So I decided to have one last listen on 40m hoping to pick up some New Zealand stations and possibly some North America.  Sadly this was not to be the case, but I did log a further 12 Australian stations from VK2, VK3, and VK4.

Time had marched on to 6.00 p.m. and it was now getting close to 5 deg C.  I packed up and headed home, feeling very happy with a total of 86 QSOs in the log. 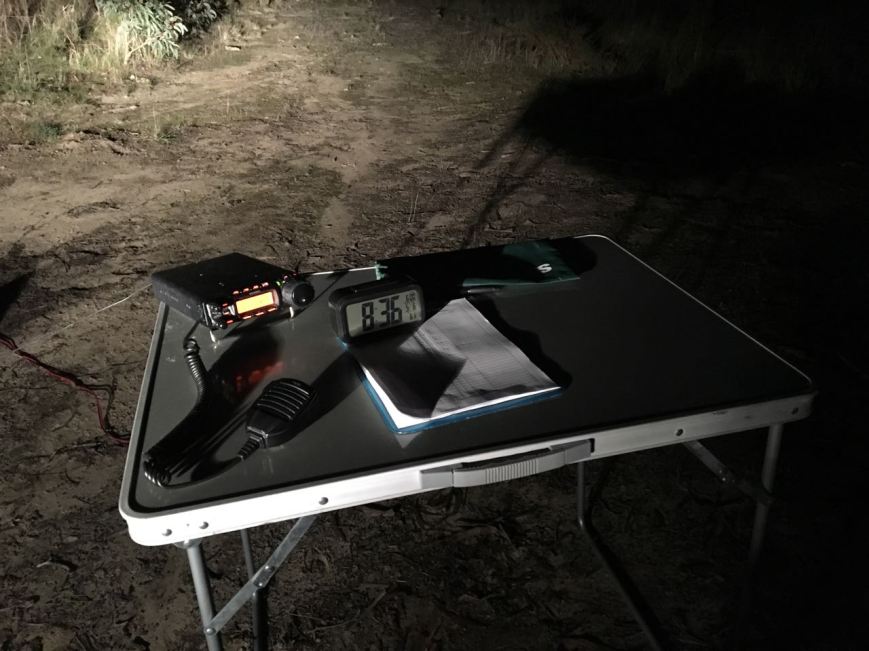 On the way home in the mobile, I logged ZL1JV and ZL4U in the NZART Memorial Contest.  I could hear some other ZL stations calling CQ contest, but they were just a little too low to work from the mobile.