On Saturday morning (7th April 2018) Marija and I left the motel at Renmark and made our way out to the historic Overland Corner Hotel for the 2018 BRL Gathering.  Each year in April the Riverland Radio Club hold a get together at Overland Corner, where amateurs travel from far and wide for a weekend of socialising and sharing their ham experiences.  This year, 2018, is the fourth year that such an event has been held, and Marija and I have been to each of these.

The BRL Gathering takes place at the Overland Corner Hotel which dates back to 1859.  For more information on this historic hotel, please see my post re the 2017 BRL Gathering at…….

This really is a great day of catching up with fellow hams and their partners.  There were a number of familiar faces, but this year I was really pleased to meet for the first time, Keith VK3FMKE who had travelled all the way from Melbourne.  Other long distance travellers included Dennis VK2HHA, Frank VK3VEF, and Joe VK2EIR who had made his way from Sydney. 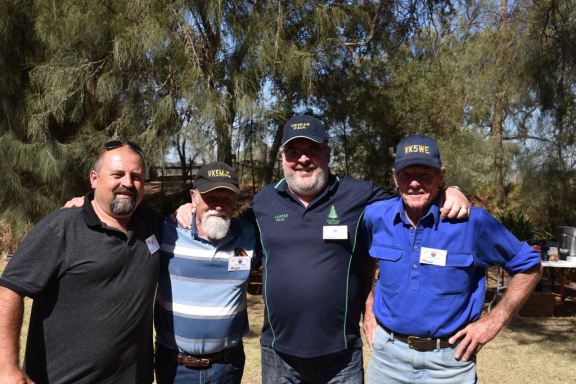 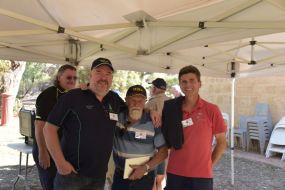 Each Saturday morning the BRL Net is run on 7.115.  And on Saturday a special BRL Net was run from Overland Corner.  Ron VK5MRE was Net Control, with callers from all across Australia. 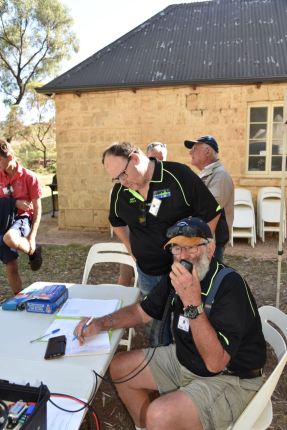 I set up a little display table at the gathering which promoted the WWFF program and the VK5 Parks Award.  I had a number of transceivers, power supplies, and awards on display.

The Riverland guys had recently been involved in a club project building cross yagis to work the amateur radio satellites.  These were brought out during the day and a number of contacts were made.

After lunch it was time for the group photo.

A number of presentations were then made including the Home Brew competition.  Grant VK5VGC was the recipient for his home brew dipole antenna. 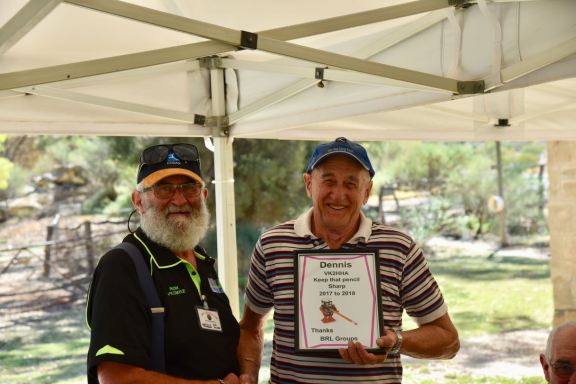 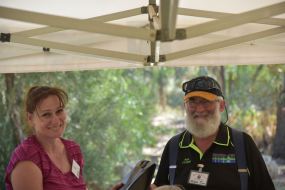 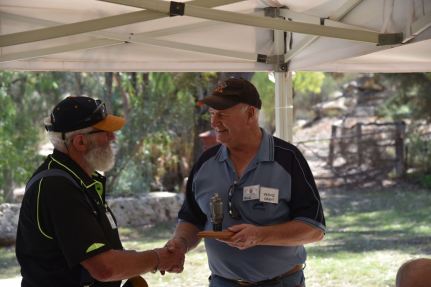 At around 3.00 p.m. Marija and I left Overland Corner and headed back to Renmark.  Along the way we stopped to have a look at the Lake Bonney Hotel ruins.  The hotel dates back to 1859 and was built by William Napper and William Parnell who had emigrated to Adelaide from Guernsey in 1855.  The ruins are the remains of the 11 room hotel and a separate store hut to the south. 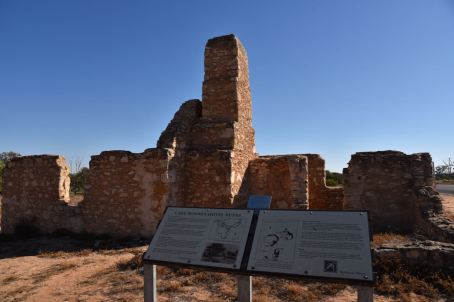 We then stopped briefly at Lake Bonney at Barmera, a large freshwater lake which is fed and drained by the Murray River.

We then drove in to Berri and down to Martins Bend Reserve.  This is one of the Riverland’s most popular picnic spots and is located on the banks of the Murray River. 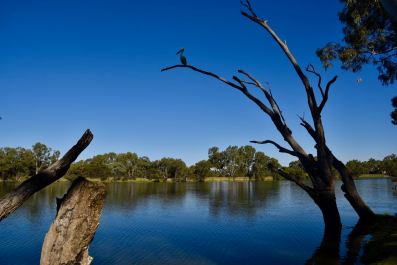 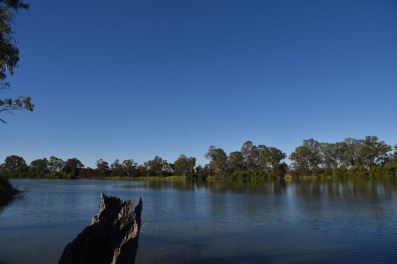 We then made our way back to the hotel where I caught a bit of shuteye.  It was then time to freshen up and head off to the Renmark Hotel where we had arranged to got out for tea with a group.  A nice meal was enjoyed and plenty of laughs were had.  It was the ending to a really enjoyable day.  THANKS to the member of the Riverland Radio Club.

On Friday 6th April 2018, both Marija and I finished work early and headed home and pack the Toyota Hi Lux and headed off to the Riverland Region of South Australia.  We had planned to stay at Renmark for 2 nights and attend the BRL Gathering on Saturday at the historic Overland Corner Hotel just out of Barmera.   We had a 260 km drive from our home in the Adelaide Hills to Renmark.

Above:- Map showing our route to the Riverland.  Map courtesy of plotatoute.com

We drove to Tailem Bend and refuelled and then headed out along the Karoonda Highway.  We stopped briefly at the Goyders Line monument at Wynarka.  What is Goyders Line?  It is a line that runs roughly east-west across South Australia and, in effect, joins places with an average annual rainfall of 10 inches (250 mm).  North of Goyder’s Line, annual rainfall is usually too low to support cropping, with the land being only suitable for grazing.  Related to that, the line also marks a distinct change in vegetation. To the south, it is composed mainly of mallee scrub, whilst saltbush predominates to the north of the line.

Goyders Line earns its name from George Woodroffe “Bud” Goyder (1826 – 1898) who was the Sruveyor General of the colony of South Australia.  The colony was only 30 years old, and farmers needed reliable information about the climate and growing conditions.   In 1865, Goyder was asked to map the boundary between those areas that received good rainfall and those experiencing drought.   After traversing an estimated 3200 km on horseback (not including the Eyre Peninsula) in November 1865, he submitted his report and map to the state government on 6 December. 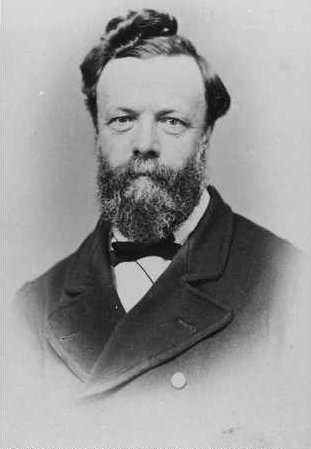 We continued on to the town of Karoonda which was a buzz with activity.  Each year the Karoonda Farm Fair is held in the town.  It is an annual 2 day event showcasing local, state and interstate farming and general interest products, services and events. 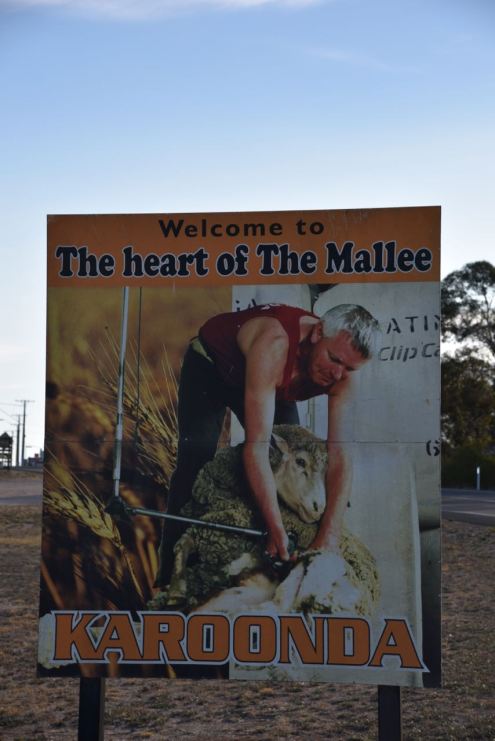 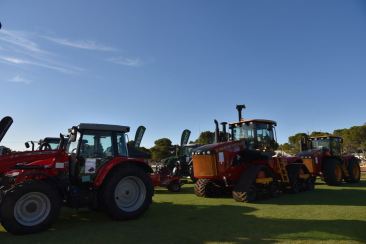 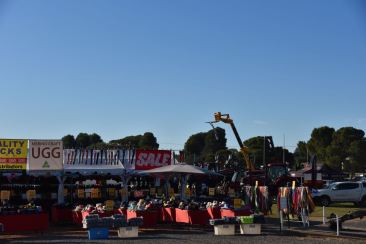 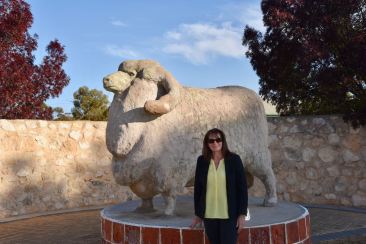 Just after leaving Karoonda I booked in to the Kandos Group on 7.093.  Tom VK4ATH was Net Control and had a good 5/7 into the mobile.

We got into Renmark around 5.45 p.m. and booked in to our motel, the Citrus Valley Motel, where we regularly stay.  After checking in we headed to the Renmark Club and enjoyed a very nice meal on the decking overlooking the mighty Murray River.  It was a beautiful balmy evening.

Following our meal we headed east out of Renmark, over the Murray and through the little town of Paringa, for a quick activation at the Pike River Conservation Park 5CP-180 & VKFF-0831.  The park is located about 215 kilometres north-east of the state capital of Adelaide and about 2 kilometres south of the town of Paringa.

Both Marija and I have activated and qualified the park previously for both the World Wide Flora Fauna (WWFF) program and the VK5 National & Conservation Parks Award.  Please click on the links below for details on my previous activations…..

Pike River Conservation Park is 2.99 km2 in size and was gazetted on the 1st February 1979.  It is named after Pike River, a stream which flows through its eastern end.  On 10th December 2009, crown land in section 84 of the Hundred of Paringa which was formerly the Mundic Forest Reserve was added to the park

The park is a permanent wetland area and adjacent land on the River Murray flood plain.  It is a valuable feeding and breeding habitat for various water birds. We entered the park via an open gate at the south eastern corner of the park.  It was totally dark by the time we got to the park, but it was a beautiful evening, with the temperature being 19 deg C.  We followed a 4WD track down towards the river and set up alongside of the track.  For this activation I ran the Yaesu FT-857d, 40 watts output, and the 20/40/80m linked dipole, inverted vee, on the top of the 7m telescopic squid pole.

The 40m band was quite busy with lots of North American stations and also South East Asian stations, but I eventually found 7.155 and called CQ.  George VK4GSF was first in the log, with a lovely 5/9 signal.  Colin VK4PDX followed, he was also 5/9, then Ian VK1DI and then Kev VK2KEV/m.  However it was really slow going on 40m so I decided to head to the 80m band.

I then moved back to 40m and booked in briefly to the 7130 DX Net where I logged my good mate Andy VK4TH and also Gary ZL3SV.  Sadly I was unable to hear the Victorian stations on the net, and the frequency was also being bombarded with interference from West Malaysian stations and also the Over the Horizon radar.

To finish off the activation I worked Bill VK4FW and Ivan VK5HS on 7.155.

Marija and I packed up and headed back into Renmark and back to the motel, where I watched some of the Commonwealth Games and the footy, before heading off to bed.

I worked the following stations on 40m SSB at Pike River:-