On Saturday morning (22nd April 2017) Marija and I headed out to the historic Overland Corner Hotel for the 2017 BRL Gathering, hosted by the Riverland Radio Club.  This was the third year that the club had held the event.  And this year was special as the Amateur Radio Experimenters Group (AREG) were going to conduct a High Altitude Balloon launch at the gathering.

So after breakfast at the motel, Marija and I made the 30 minute journey from Renmark out to the Overland Corner Hotel.

Map showing the location of the Overland Corner Hotel in the Riverland region of South Australia.  Map courtesy of google maps.

The Overland Corner Hotel is located about 21 km from Barmera, and is situated off the Goyder Highway.  The hotel was originally established as a watering hole for drovers and overlanders operating between New South Wales and Adelaide in the colony of South Australia.  It also served as a temporary camping ground for steamers passing through the area along the mighty Murray River, about 600 feet from the hotel.  The hotel was erected in 1859 and since that time has served as a staging point, a general store, a police station and a local Post Office.

The Brand brothers, Henry, William, George and James who migrated to Australia from Kent, England in 1851 were commissioned by John Chambers, the enterprising pastoralist to build the Overland Corner Hotel in 1859.   The hotel’s original construction was almost entirely of locally available materials, including limestone, red gum and native pine timbers, a dirt floor, and thatched roof of river reeds.  A nearby quarry provided the stone for the hotel.  The rock is composed almost entirely of fossils. Corals, shellfish and the occasional shark’s tooth give evidence that this area was once covered by warm, shallow seas, long before man walked on the earth, some fifteen million years ago.  That the building remains is a tribute to these pioneer builders and their skills of construction.

The National Trust purchased the building in 1965 and the fossilised limestone building was completely restored.  It is the oldest structure remaining in the area. 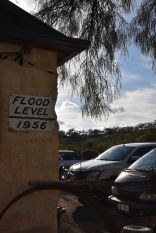 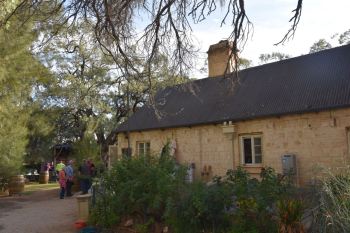 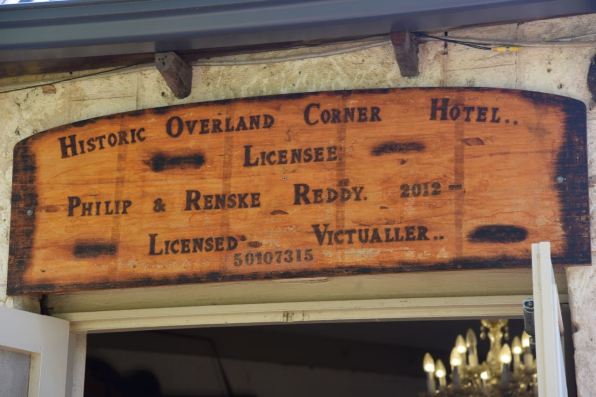 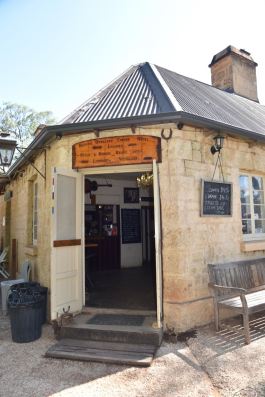 There is a small museum in the hotel displaying various relics, even an old morse key.

It is reputed that the bushranger Henry Arthur ‘Harry’ Readford, visited the hotel.  Readford was imortalised in the 1882-83 novel ‘Robbery Under Arms’.  The character ‘Captain Starlight’ in the book was a composite of several bushrangers including Readford created by the author Rolf Boldrewood.  It is reported that Readford and his gang came to Overland Corner, and after stopping in at the nearby police station, where they locked the police in the cells, retired to the Overland Corner for a drink.  Stories abound that Readford even rode his horse into the bar and before leaving he carved his name onto the hotel’s wall.  Sadly no trace of this remains today.

The carpark at the rear of the hotel offered plenty of room for those staying for a few nights at Overland Corner for the BRL Gathering. 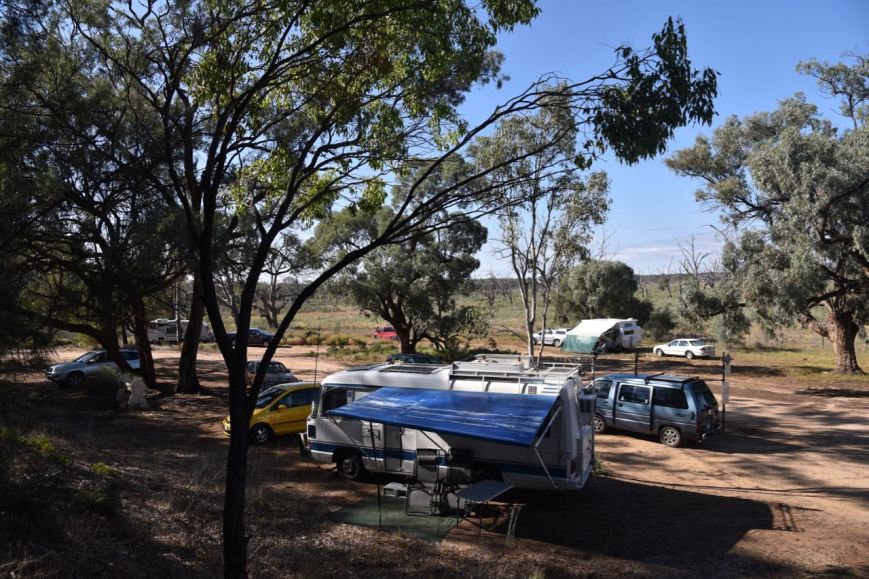 The BRL Gathering is a terrific social function, and if you have never attended, I highly recommend that you do.  It is a great day of catching up with old mates and sitting around in the pub’s gardens enjoying a frothy or two and a great pub meal.

Without a doubt the highlight of this years BRL Gathering was a High Altitude Balloon launch by the Amateur Radio Experimenters Group (AREG). 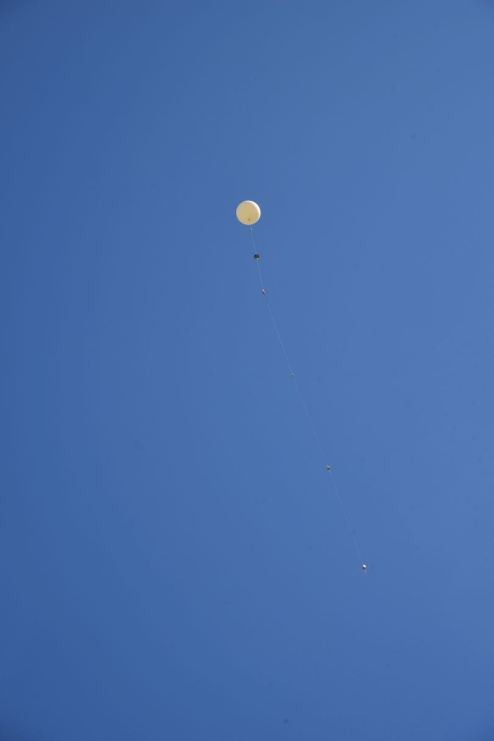 Below is a short video of the balloon launch…….

This was the first test flight of a new experimental cross band voice repeater: Input- 147.500 MHz, Output- 438.850 MHz.  A number of contacts were logged on the repeater, with the special call of VK5WOW being used.  Marija and I were lucky enough to make contact via HT. 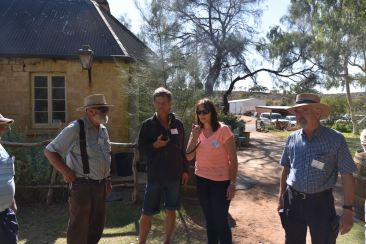 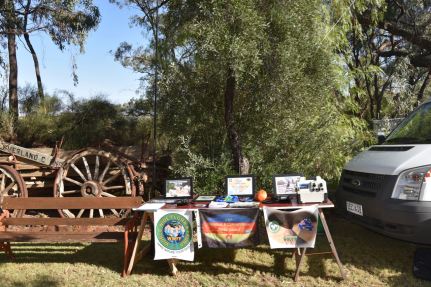 Frank VK3VEF was awarded the BRL Net Award, while Dennis VK2HHA was issued with a special award certificate for assisting as a relay station on the Riverland Radio Group Net. 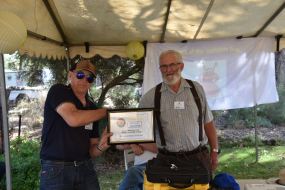 A great day had by all.  Marija and I will certainly be there again next year.

After leaving we popped in just up the road to have a look at a historic BlackBox tree dating back to 1780.   The species has fibrous roots that were chewed by Aboriginal women to make a tough fibre. The fibre was used to make netting to trap birds, animals and fish.  Nets were up to 50 metres long and could take a year or more to make.

We then stopped in to have a look at the Overland Corner cemetery, which is the largest cemetery in the area and is still used today.  Members of the Brand family and other residents of the early European settlement lie here.

We also visited the lookout from where you can enjoy panoramic views of the flats, river cliffs and the hotel.

We then stopped off at Chocolates and More at Monash which is located opposite the Monash Adventure Park.  Plenty of calories here to be enjoyed.

We had a little bit of time before dinner, so we also visited the small lookout tower on the outskirts of Renmark, and enjoyed the sunset.

That evening, a number of us, including Ivan VK5HS and his wife Cheryl, Peter VK5PE and his wife Nat, and Mick VK3GGG and his wife Anne, had dinner at the Renmark Hotel.  Plenty of laughs were had. 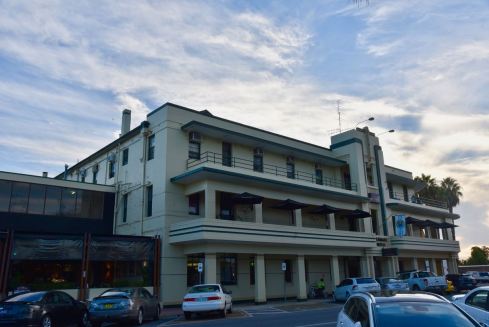