Last night (Tuesday 26th June 2018) I decided at the last minute to head out to active the Ferries McDonald Conservation Park 5CP-067 & VKFF-0881 using the special call of VI70MI.  This was my last night using the call, and as I currently have no dedicated 80m antenna at home, I headed out for an evening park activation, particularly focussing on the 80m band.

The Ferries McDonald Conservation Park is about 70 km east of Adelaide and about 25 km south west (by road) from Murray Bridge.

To get to the park I travelled east along the South Eastern Freeway until I got to the Monarto turnoff.  I then travelled along Ferries McDonald Road at a slow pace, as there were lots of kangaroos on the road.  The area is also known to be the home of the endangered Mallee Fowl and there are signs in place reminding you to drive with care with respect to the local wildlife.

The Ferries McDonald Conservation Park is quite a large park, comprising 842 hectares of dense mallee scrub.  Much of the land surrounding the current park was cleared years ago for agriculture, but a few rocky outcrops, not suitable for farming practices, preserved fragments of the original vegetation.  The park is home to a variety of rare and endangered plant species.  Resin Wattle (Acacia rhetinocarpa) is a compact, resinous spreading shrub that grows up to 2 metres in height with bright yellow flowers.  It is endemic to South Australia and is only found in a few locations across the state including three populations in Ferries McDonald CP.

Above:- Aerial shot showing the Ferries McDonald Conservation Park, looking south out towards the Coorong and the Southern Ocean.  Image courtesy of google maps

On 28th July 1938 the area was gazetted as a Closed Area for Birds and Animals, creating the first reserve specifically for mallee fauna. The area was named after Robert Sweet McDonald, the donor of much of the land.   In 1953 an addition to the park was made with monies from a bequest from James Ferries, thus creating the Ferries-McDonald Reserve.  The area was previously known as Chauncey’s Line Scrub.

A number of native animals call the park home including the Red, Western Grey and Euro Kangaroos.

A focus within the park has been the protection of the Malleefowl (Leipoa ocellata), a native bird species that originally inhabited much of the natural mallee environment.  Malleefowl are listed as vulnerable nationally but are critically endangered in the Northern Territory and Western Australia. 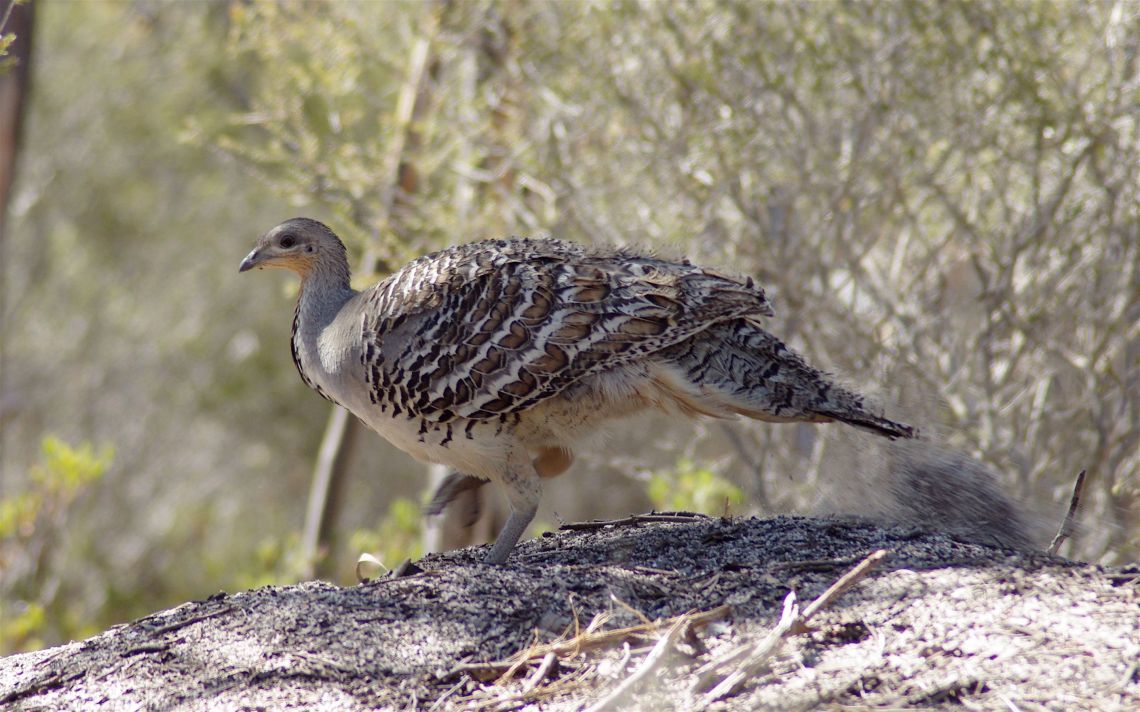 Above:- Malleefowl.  Image courtesy of wikipedia.

I set up in my normal operating spot, in the carpark in the south eastern corner of the park.  I braved the cold during this activation, with the temperature dropping down to 4 degree C during my time in the park.  I ran the Yaesu FT-857d, set at 40 watts output, and the 20/40/80m linked dipole.

First in the log on 3.603 on 80m was John VK5NJ at Mount Gambier with a strong t/9 plus signal.  This was followed by Adrian VK5FANA on the Yorke Peninsula who was equally as strong.  Adrian gave me a 40/9 signal report.  Conditions on the band were great, with no man made noise of course in the park, but also limited static crashes.

I then moved to 40m as Les Vk5KLV up at Port Augusta was hoping to log me and did not have a dedicated antenna for 80m.  Sadly Les was unable to hear me on 40m.  But I did log 10 stations including Greg VK8GM in Alice Springs.

I moved back to 80m before packing up.  I logged a further 13 stations, including Les VK5KLV who was able to make it with his compromise 80m antenna.  I was pleased to get Les in the log.

I was now freezing and it was time to pack up and head home to the warmth.  I had a total of 52 contacts in the log which I was very happy with.