On Monday 25th June 2018 I headed to the Scott Conservation Park 5CP- & VKFF-0934 to activate the park using the special call sign of VI70MI.  The special call issued to Commemorate 70 years of ANARE (Australian National Antarctic Research Expeditions) for Macquarie Island, which since 1947 have served Australia in the south polar regions.

Scott Conservation Park is about 75 km south of Adelaide and about 7 km north west of Currency Creek. 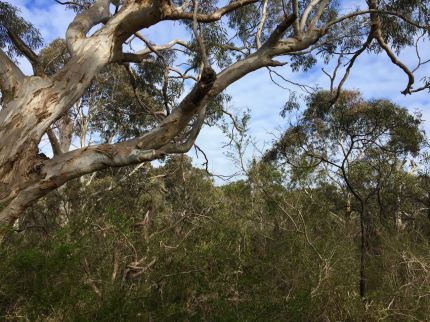 The park is a terrific piece of native scrub which is generally surrounded by cleared farming land.  The next largest piece of scrub near Scott is the Cox Scrub Conservation Park.

Above:- Aerial shot showing the location of the park on the Fleurieu Peninsula.  Image courtesy of google maps

Above:- Map of the park showing my operating spot.  Map courtesy of Location SA Map Viewer.

Unfortunately I did not plan this activation very well, and left home without the camera, and secondly with an almost flat mobile phone.  So I was only able to take 3 photos during this trip to Scott.  And I wasn’t able to self post on parksnpeaks and facebook, so I was relying upon the good will of park hunters.

I kicked off the activation by calling CQ on 7.144 which was answered by Geoff VK3SQ, followed by Lee VK3FLJD, and then Nick VK3ANL.  Although it was a weekday I was pleased to have a good flow of callers eager to get the VI70MI callsign in their log.

I managed to log 31 contacts on 40m including two Park to Park contacts, with Bill VK4FW/p in the Sheep Island Conservation Park VKFF-1642, and Allan VK2MG/p in the Bouddi National Park VKFF-0049.  I then lowered the squid pole and inserted the links for the 80m section of the dipole.  I called CQ on 3.610 and thus was answered by Greg VK5GJ with a big 5/9 signal, followed by Hans who was also 5/9 plus.  I was really pleased to log a total of 9 stations on 80m from VK3, VK5 and VK7.

Above:- My shack for the morning.  A nice setting.

I then headed to 20m and called CQ on 14.310.  First in the log was Greg VK5GJ who had followed me from 80m.  Next was regular park hunter John VK4TJ, who become contact number 44 in the log.  This was followed by Bill VK4FW/p for another Park to Park contact from the Sheep Island Conservation Park.

To complete the activation I headed down to 3.610 and logged Gerard VK2IO/p on his SOTA summit, and then Peter VK3TKK/p for another Park to Park.  Last in the log was Peter VK3PF.

It had been a fun 90 minutes in the park and I had 64 contacts in the log, including five Park to Park contacts.

Department of Environment and Natural Resources, 2011, ‘Parks of the Fleurieu Peninsula’.