On Saturday afternoon (13th April 2019) I headed out to activate the Cromer Conservation Park 5CP-049 & VKFF-0779.  I have activated and qualified Cromer previously, so this activation was for a bit of fun, and to go towards the Boomerang Award.

The park is located about 38 km northeast of about 5km north of the town of Birdwood in the Mount Lofty Ranges ‘Adelaide Hills’.

Above:- Map showing the location of the Cromer Conservation Park in the Adelaide Hills.  Map courtesy of Location SA Map Viewer.

The Cromer Conservation Park is 44 hectares (110 acres) in size and was proclaimed on the 22nd day of January 1976.  The park contains one of a few areas of natural vegetation in the Mount Lofty Ranges, with the main vegetation in this park is woodland comprised of Long-leafed Box (Eucalyptus goniocalyx) with Pink Gum (E. fasciculosa).  The park is in pristine condition, having never been grazed by stock. 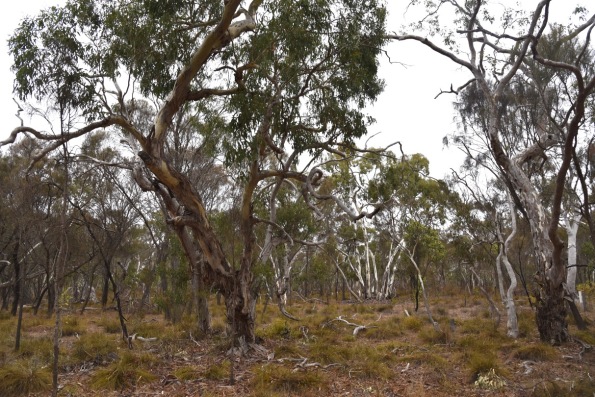 The park takes its name from the area of Cromer, which is named after Cromer in Kent in England.   Cromer in South Australia was the site of an alluvial gold rush at ‘Bonney’s Flat’ in 1870.  A school was opened at Cromer in 1898 and was known as ‘Para Wirra’, and closed in 1950.  The Cromer Post Office was opened in 1910 and closed in 1944.

The park is one of only three sites in South Australia, where the critically endangered blue star sun-orchid can be located.

Above:- An aerial view of the Cromer Conservation Park, looking north towards the Barossa Valley.  Image courtesy of google maps

I travelled to Birdwood and then headed north on the Cromer Road.  Not long after passing Lucky Hit Road, I reached the park which is well signposted.  Do not confuse the scrub to the south of Cromer, as it is not part of the park.

I parked alongside gate number one, and walked a short distance into the park and set up my station.

Above:- Gate one at the Cromer Conservation Park

For this activation I ran the Yaesu FT-897, 30 watts output and a 20/40/80m linked dipole, supported on a 7-metre heavy duty telescopic squid pole.

Above:- Aerial shot of the Cromer Conservation Park, showing my operating spot in the park.  Image courtesy of Protected Planet.

Prior to calling CQ I tuned across the band and found John VK5EMI/p on 7.120, activating his very first park, the Mungo National Park VKFF-0370.  John was an excellent 5/9 signal, and it was a pleasure to get him in the log.

I then worked Mike VK6MB/3 who was activating the Alpine National Park VKFF-0619.  Mike was a strong 5/8 signal.  Next, was another Park to Park, this time with Rob VK2XIC/p who was in the Seven Mile Beach National Park VKFF-0447.  Rob was quite low down, but as there was no man-made noise in the park, he was easily worked.

It was nearly 3.00 p.m. local time, and the 40m band was very busy, and as a result, it was very difficult to find a clear frequency.  I eventually propped on 7.130 and started calling CQ.  First in the log on 7.130 was Peter VK7ALB, followed by Don VK3MCK, and then Linda VK7QP.  I soon had a little pileup, which was made a little more difficult as an FK8 station from New Caledonia had moved in on 7.128 and was bleeding over onto the frequency.

I logged a total of 23 stations from VK2, VK3, VK4, and VK7.  This included Peter VK3PF and Peter VK3ZPF both of whom were QRP running just 5 watts.

Ray VK4NH informed me that VI9NI on Norfolk Island was on 14.244, so I took the opportunity of heading up to the 20m band, hoping that I could hear the team on Norfolk Island.  The VI9NI team had messaged me earlier to advise that they would be activating VKFF-0392 and SOTA Mount Bates VK9/ NO-001.  It was with great pleasure that I heard VI9NI calling CQ on 14.244 with just 2 watts, and they were 5/5.

After logging VI9NI I moved up the band to 14.310 and started calling CQ.  I logged 18 stations from VK2, VK4, VK7, New Zealand, Italy, Slovenia, Czech Republic, European Russia.  It was a real treat to be able to log a handful of European stations on the long path on 20m.

When callers slowed down I tuned across the 20m band and logged another 2 stations, one from VK7 and one from VK6.  I did hear some other European stations, but their signals were quite low down, and the opening to Europe appeared to have closed.

I then headed to 80m and called CQ on 3.610, but I didn’t seem to be getting any power out of the transceiver (more on this later).

I then headed back to the 40m band and called CQ on 7.160.  Ian VK1DI came back to my call with a 5/9 signal, followed by John VK5NJ, and then Charlie VK5VC.  For a short time, HC5VC from Ecuador came up on the frequency and started calling CQ.  Sadly he could not hear my signal.

I worked a total of 43 stations on 7.160 from VK1, VK2, VK3, VK4, VK5, VK6, VK7, Italy, and France.  It was terrific that there was an opening around South Australia, with a number of VK5 stations logged, including my lovely wife Marija VK5FMAZ.

Even more surprising was a call from Max IK1GPG in Italy, and then Sam F4GYG/p in France Flora Fauna FF-0041.  It was a real surprise to be called by Sam, who wad a good 5/7 signal, and gave me 5/5 into his park in France.

The audio below is courtesy of Charlie VK5VC.

Also logged was Hans VK6XN/p who was activating the Leeuwin Naturaliste National Park VKFF-0283 in Western Australia.  Hans had a nice 5/7 signal.

I now had 90 contacts in the log.  It had been a brilliant activation.  I decided to have a look at 80m again, and this time I worked out what the problem was.  I had the transceiver in a different mode to LSB.  I called CQ on 3.610 and logged a total of 12 stations.  Contact number 100 was with Peter VK3GV.

I then messaged Hans VK6XN to see if he wanted a Park to Park contact on 20m.  I logged Hans on 14.310 and then had a final tune across the band before calling it a day.  My final contact was with DX1CC in the Philippines.

Above:- Map showing my QSOs during the activation.  Image courtesy of qsomap.org

The highlight of the activation was to work F4GYG Park to Park on 40m.  Closely followed by the Park to Park contact with VI9NI on Norfolk Island. 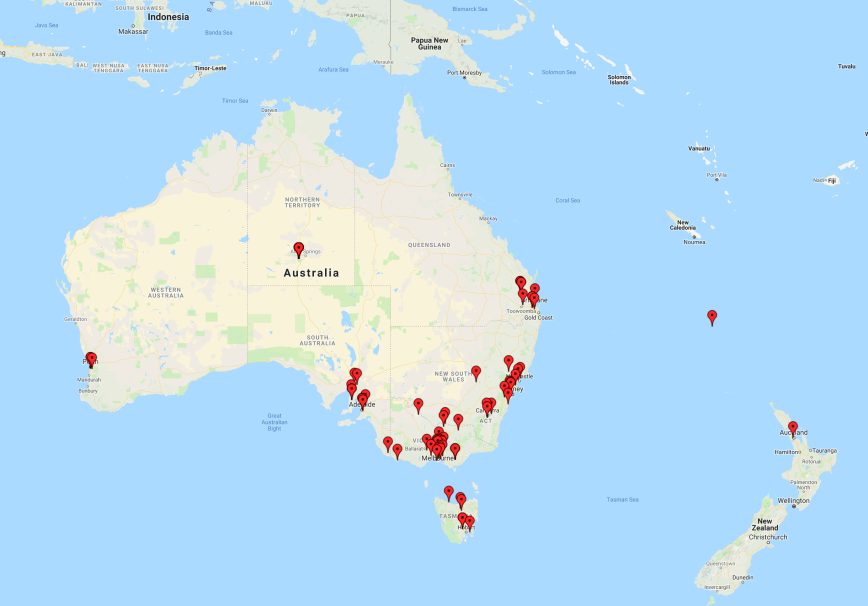 Above:- Map showing my local VK and Pacific contacts during the activation.  Image courtesy of qsomaps.org

Thank you to everyone who called, and a BIG THANK YOU to those who took the time to spot me.