After leaving the Chowilla Game Reserve we headed to the Chowilla Regional Reserve VKFF-1698.  This was to be the first time that Marija and I had activated the park. 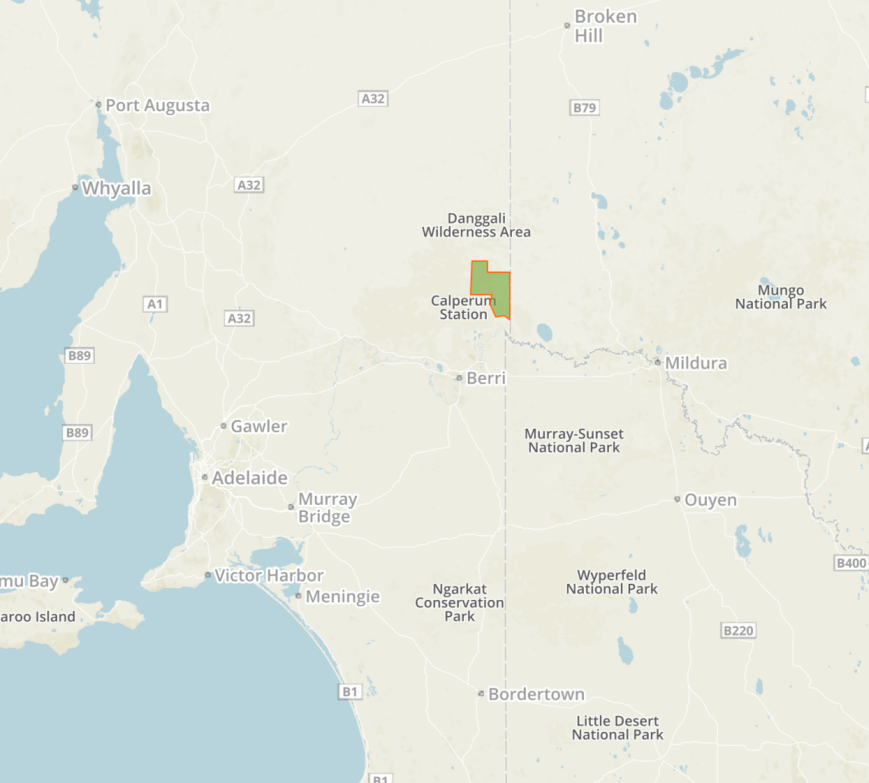 Above:- Map showing the location of the Chowilla Regional Reserve near the VK2/VK5 STate border.  Map courtesy of Protected Planet.

We drove northeast on the Renmark-Wentworth Road and soon reached another sign for the Chowilla Game Reserve and Regional Reserve. 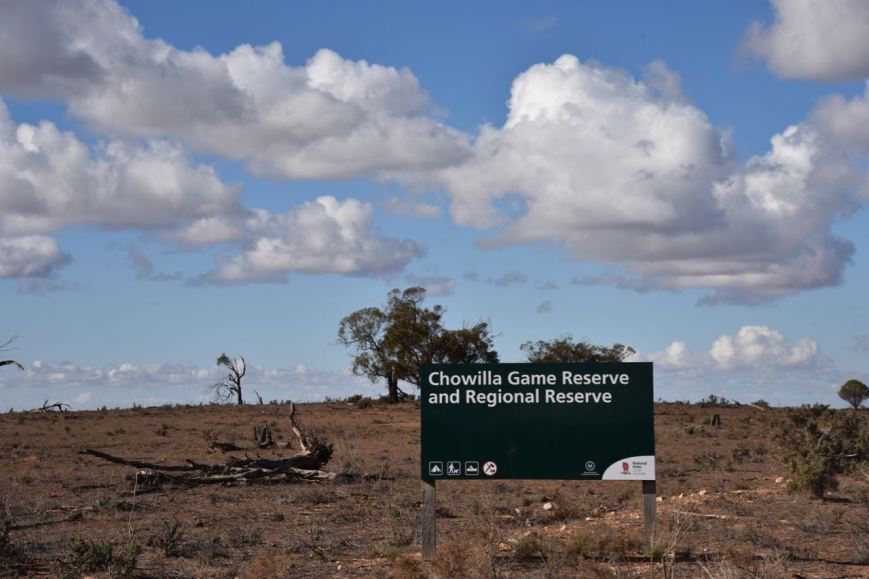 We travelled past Coombool Swamp and Lake Limbra which are located in the Game Reserve on the southern side of the road.  When there is water in the swamp and the lake, a large number of waterbirds can be found including Red-necked Stints which are a small migratory bird which makes an annual journey north to breed in Siberia and western Alaska and visit Australia during the warmer months. 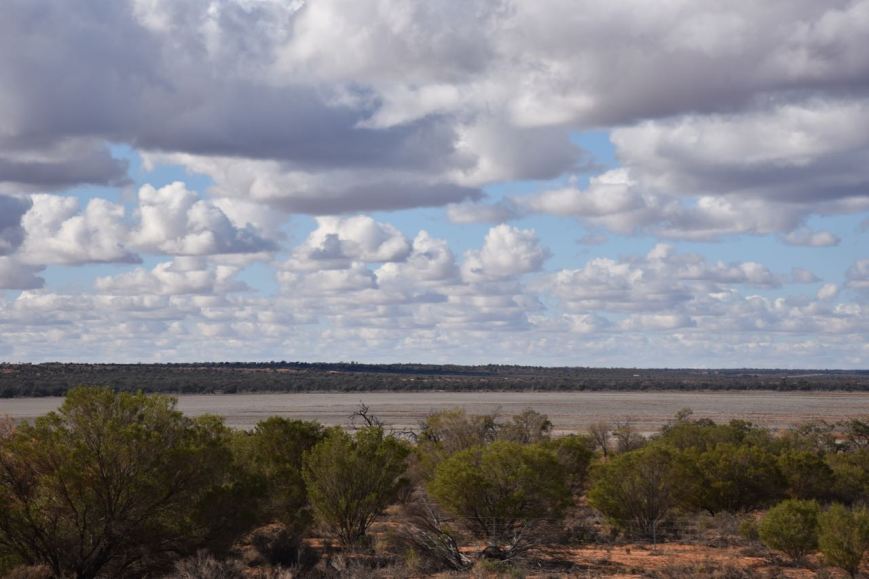 It was slow going as there were many kangaroos and emus on the road.  The Renmark-Wentworth Road speed limit is 80kph due to the wildlife and road conditions. 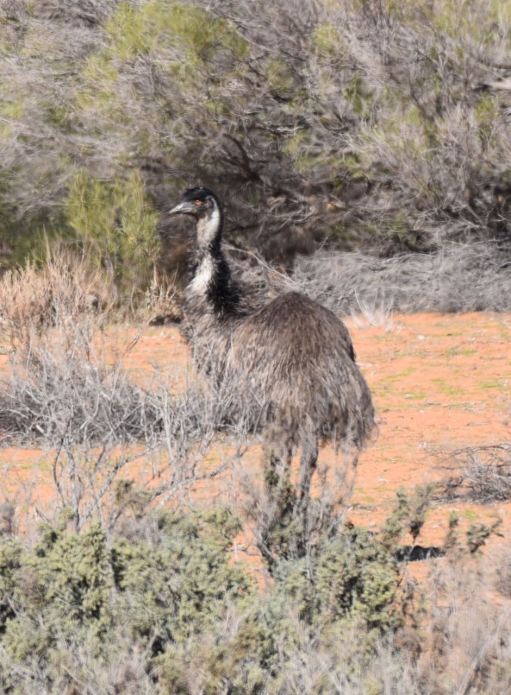 We then turned left into the Chowilla Track.  There is a sign at this location for the Danggali Conservation Park, which is located 31 km down the track. 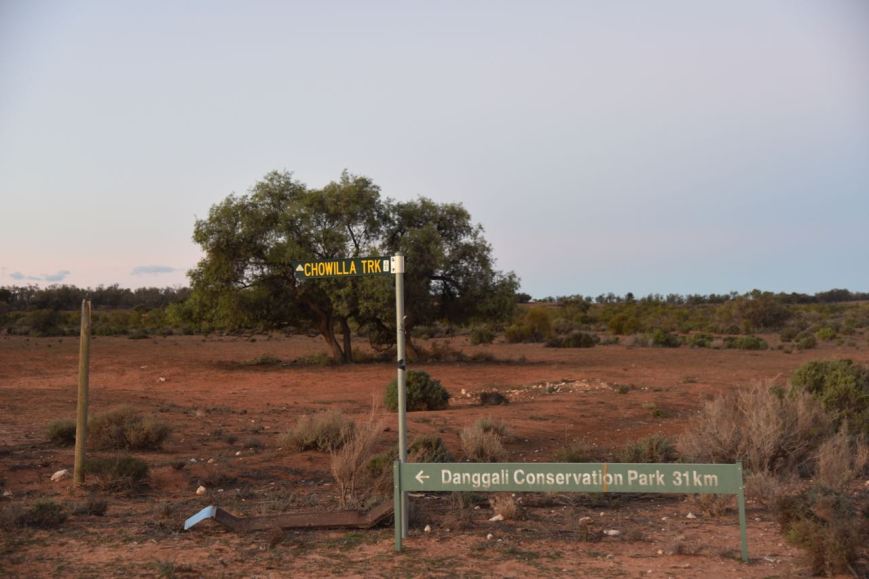 Chowilla Track is very sandy and rocky in places.  I would not try it in a conventional vehicle.  And I suspect it might be a bit tricky after rain. 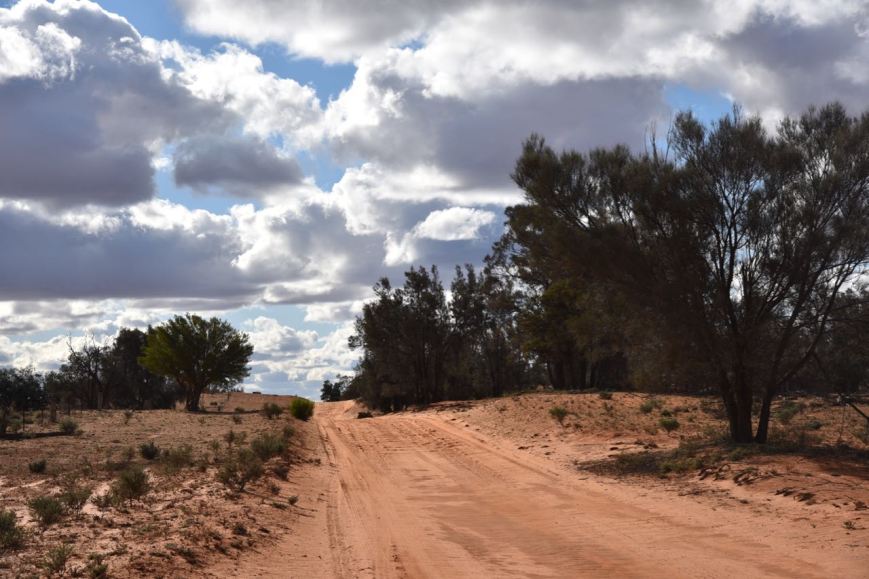 The Chowilla Regional Reserve was established on the 8th April 1993 after a prolonged period of community consultation.  It consists of 20,075 hectares of floodplain and wetland. 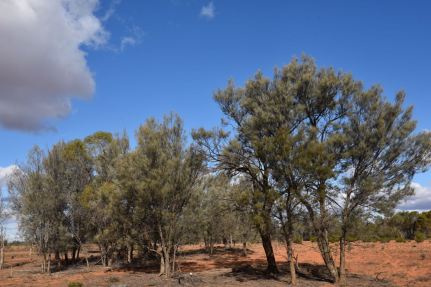 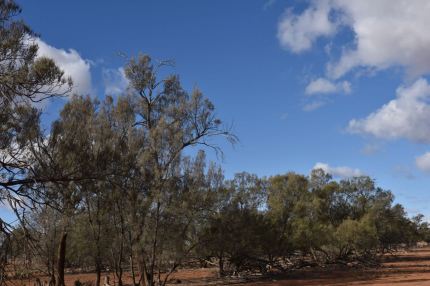 Prior to European settlement in the Chowilla area, the aboriginal Maraura and Ngintait tribes occupied the area.  They were skilled craftsmen making reed baskets, & reed and grass nets which were used to catch fish and ducks.  Possum skins were sewn with tendons from kangaroo tails and used as clothing.  Tortoise shells were used to carry water.

“There were, about half a century ago, when the present head station at Chowilla was built, many hundreds of aborigines in the neighbourhood.  There was a big camp near the Murray between the Woolshed, half a mile away, and the station, which is about 12 miles from the New South Wales border.  Today, there are no blacks near the place, although there are plenty of vestiges of their occupation.  On the sandhills back from the river, many skeletons and primitive implements have been found.  In the centre of the Chowilla orangery, which covers about 25 acres of the plain adjacent to the homestead and the river, there is a plot of ground which is sacredly preserved.  This was for hundreds of years an aboriginal cemetery.  The last king of the Murray blacks in the Chowilla district (known as Tommy Dodd) is buried there.  He died 30 or 40 years ago”. 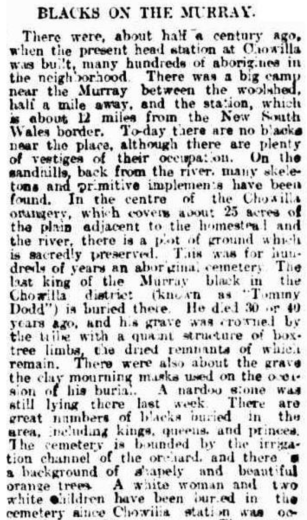 Above:- part of the newspaper article from the Adelaide Chronicle, Sat 13th August 1921.  Courtesy of Trove.

The first European pastoralists settled at Chowilla in about 1846 with Crown land being occupied by squatters who had been granted an annual occupation licence. The first Chowilla lease was held by Albermarle Bertie CATOR.  Between 1851 and 1864 the lease changed hands several times and it was during this period that the downstream portion of Chowilla became known as Bookmark.   Three brothers, John, William and Robert ROBERTSON took control of Chowilla-Bookmark and the nearby Boundary Run during the 1870s.  Stone homesteads were built at Bookmark and Chowilla between 1876-77.  It was not long after this that the historic wooldshed and shearers quarters were built at Chowilla.

Chowilla is home to numerous native mammals including both Red and Grey Kangaroos.  Many native birds can be found in the park including the endangered Black-eared Miner and Malleefowl.

I think a Kangaroo track 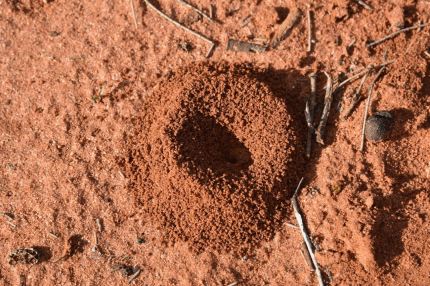 Marija and I set up on the eastern side of the Chowilla Track.  We placed the deck chair and fold up table underneath the shade of a tree, as although it was a little chilly, the sun had some considerable bite.  We ran the Yaesu FT-857d and the 20/40/80m linked dipole for this activation. 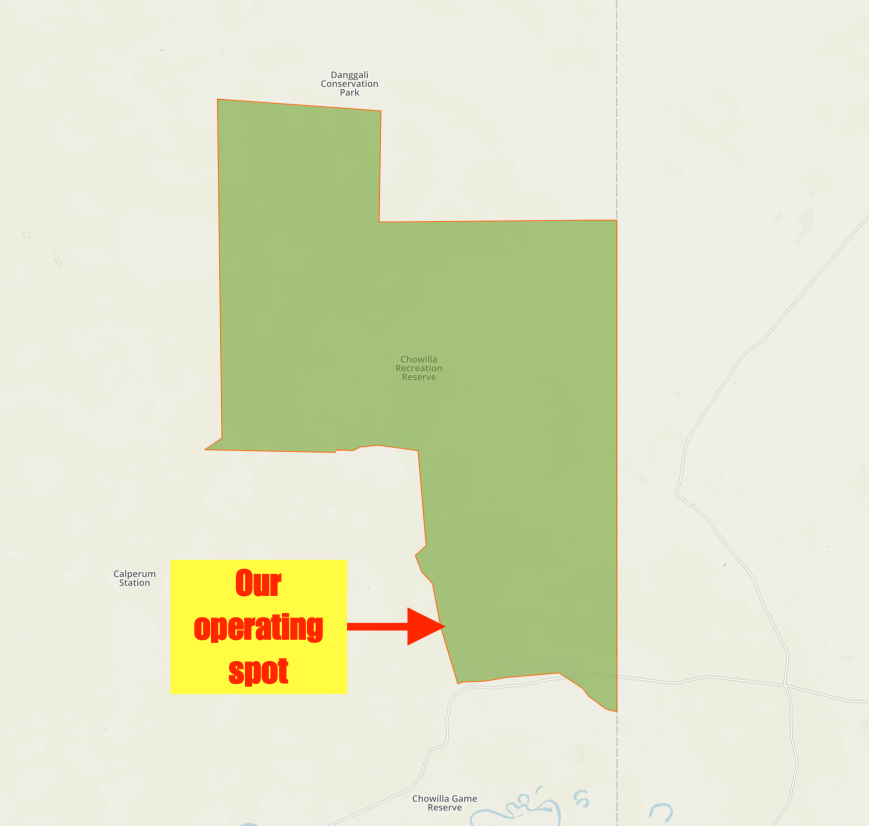 We had no internet coverage from the park so we were unable to self spot on parksnpeaks.  I called CQ on 7.144 and it didn’t take long for my first caller, Keith VK2PKT.  This was followed by Kieran VK2QK, Anthony VK3LAJ and then Ray VK3NBL.

Contact number ten, qualifying the park for VKFF, was with Andy VK2JXA.  This was followed by a Park to Park with Mike VK6MB/3 who was activating the Cobram Regional Park VKFF-0961.  A steady flow of callers followed, and about 14 contacts later I worked another park activator, Rob VK4AAC/3 in the Warby Ovens National Park VKFF-0742.  This was followed by Peter VK3TKK/p who was activating the Mount Charlie Flora Reserve VKFF-2396. 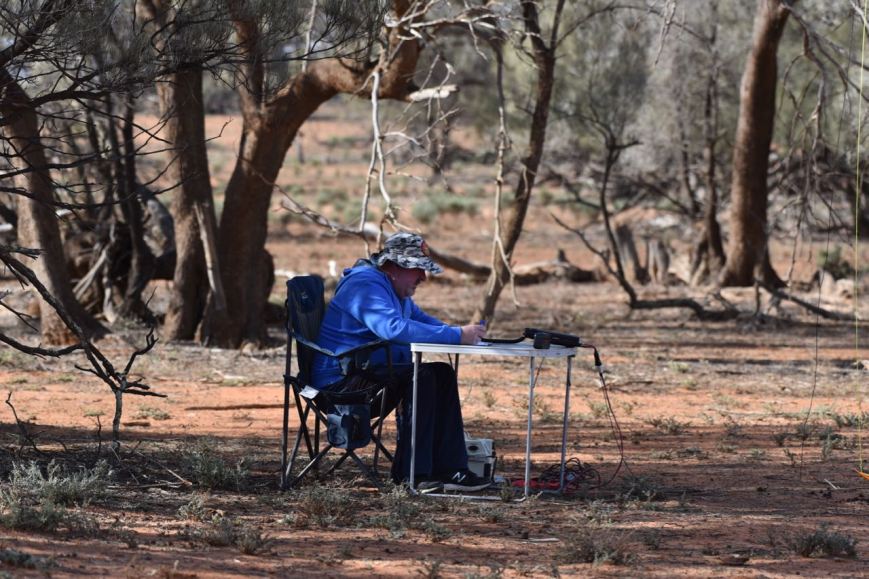 I logged 27 stations and then swapped the mic with Marija whose first contact was with Rob VK4AAC/3 in the Warby Ovens National Park VKFF-0742, followed by Peter VK3TKK/p in the Mount Charlie Flora Reserve VKFF-2396.

I logged a further 13 stations including Neil VK4HNS/p who was activating the Lamington National Park VKFF-0280.  With 40 contacts in the log, and callers having dried up on 40m I headed down to the 80m band.  First, in the log there was Andy VK5LA, then Geoff Vk3SQ, Gerard VK2IO/5 and then a Park to Park with Mike VK6MB/3 in the Warby Ovens National Park VKFF-0742.

To finish off the activation I called CQ on 14.310 for about 5 minutes but had no takers.  Unfortunately, as there was no internet coverage we were unable to spot on parksnpeaks. 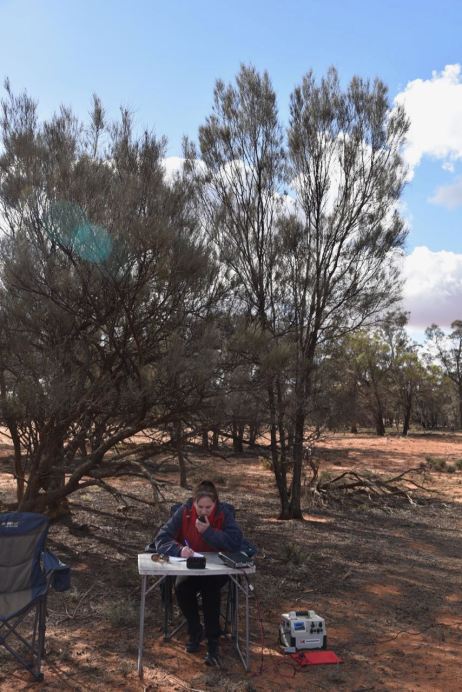