On Saturday afternoon, 15th June, 2013, on my way back to Whyalla I stopped in at the Wharminda Conservation Park.  I had intended to activate my 11th SOTA summit that afternoon, but the weather on the southern Eyre Peninsula was very poor, so unfortunately I had to cancel the hike.

Wharminda Conservation Park is situated on the Eyre Peninsula, a few kms from the little railway siding of Wharminda.  It is about 42 kms south west of the seaside town of Arno Bay.

I travelled north out of Wharminda and access the park on its northern side.  The roads throughout the area here are all dirt.  And they were in quite poor condition after all the rain we had received over the week.  So at times it was a bit of a challenge with the Falcon XR6.

The park is located in close proximity to the much larger Hincks Conservation Park, but I could not get there because of the road conditions.  Wharminda CP which was proclaimed in 1985, consists of about 269 hectares of mallee and shrubland.

The park supports a large variety of fauna including Western Grey kangaroos, Hopping Mice, and Dunnarts.  Numerous bird species are also found including emus, Fairy wrens, mallee fowl, and a variety of parrots.

I then set up on 7.099 and called CQ and was ‘Hunted’ by some of the usual suspects including John VK5FTCT, John VK5BJE, Roy VK5NRG, Btriran VK5FMID, Col VK5HCF, and Peter VK3PF.  Peter VK3PF advised that by working me, he had just tipped over the 20 point mark, qualifying him for the Silver Award for the VK5 Parks Award.

After placing the unlucky number of 13 QSO’s in the log, I packed up the gear and headed north to Whyalla, which was still about 200 kms away.

On Saturday 16th June, 2013, I activated North Block, VK5/ SW-024, which is situated about 55 kms north west of Port Lincoln.  The summit is situated about halfway between the little towns of Coulta and Edilillie.  North Block is 365 metres above sea level and is worth 1 point.  It is about 700 kms from Adelaide.

I had based myself in Port Lincoln for 2 nights, so it was another early start from Lincoln.  I got up at about 6.00 a.m. and drove out along the Flinders Highway, through the town of Wangary, and then further north to the little town of Coulta.  A few kms north of Coulta, I turned right onto Gap Road.  The road is aptly named because it takes you right between North Block & South Block, which stand very close together. 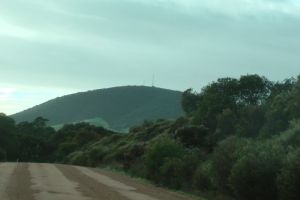 The summit is located on private property owned by Darrell & Isobel PUCKRIDGE, who are a very friendly couple.  I called in there first to say hello and collect the key which is required to undo one of the padlocks on the gate to gain access to the summit.  There is an Air Australia navigation facility and a radio tower on the top of the summit, so there are a few locks on the gate which belong to each of the stakeholders.  Whilst there I was introduced to Darrell & Isobel’s young kangaroo, which clearly thinks it is a dog.

The gate to gain access to the summit is located a few hundred metres west of Darrell & Isobel’s property, back down Gap Road.  There is a dirt road, which is in good condition, which leads all the way up to the summit.  After travelling through the paddock, there is a sharply rising section of the track.  I parked my car at the top of this and then walked the rest of the way to the summit, which was probably about a 1 km walk.

At the top there is an Air Australia air navigation system and a very large radio communications tower.  The weather looked really lousy all the way around me, particularly to the east of me.  After setting up my gear and turning the radio on, I was saddened to hear a noise floor of about signal strength 7.  But I had already set up and the weather was threatening, so I decided to hang in there and work as many as I could for as long as I could, before having to dash back to the car. 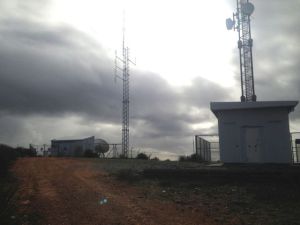 There are some spectacular views from the top of the summit in all directions.  It was just a pity about the gloomy weather, but I guess that’s what you expect for June.  South Block is the closest imposing feature, rising 391 metres ASL, and is in very close close proximity to North Block, just to the south.

Out to the west, you can clearly see Mount Greenly & Mount Dutton, both of which I had climbed and activated the day previous.  To the south west, was the imposing Marble Range, which is on my list of summits to do on my next Eyre Peninsula trip.  Many of the winter flowers were out on the top of the summit, including the beautiful correas and the flame heath. 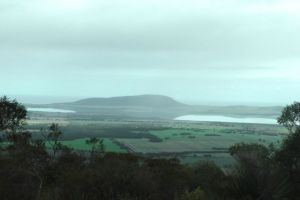 My first QSO of the morning was with Peter VK3PF, who had his normal strong signal.  This was followed by a few of the regular ‘Chasers’ and some not so regulars.  It was great to hear a few new calls.  I spoke with Ian VK5CZ, who was portable on Brown Hill Range, VK5/ SE-004.  I managed two s2s contacts with Ian, before & after the UTC rollover.  And to my listening pleasure, the noise floor dramatically dropped on 40m after about 10 minutes. 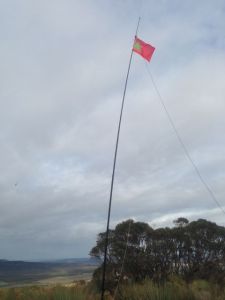 Andrew VK1NAM had put out a challenge during the week for ‘Chasers’ to try operating over the weekend with QRP.  I had a few good QRP to QRP contacts with Ernie VK3DET who was using just 5 watts.  Each time I spoke with Ernie he was a very comfortable copy (5/7 both ways).  I also spoke with Andrew VK2UH, who was initially using 5 watts and was a good 5/7 signal.  He then lowered his power output down to 1 watt and I was able to clearly hear him, signal report 5/5 with some QSB.  I also spoke with Jim VK5JW who was also using just 5 watts.

I would have stayed longer except for the weather.  At the last minute the showers started to come in and I was forced to go QRT rather quickly, disassemble the antenna and do a mad dash back to the car.  Sorry to anyone who may have been calling.

More information on PeakClimbs at…..

Below is a video of my activation, which I have placed on You Tube.