My second activation for Saturday 19th October, 2013 was the Carribie Conservation Park which is situated on the Yorke Peninsula, about 281 km from Adelaide, and just north of the little settlement of White Hut. 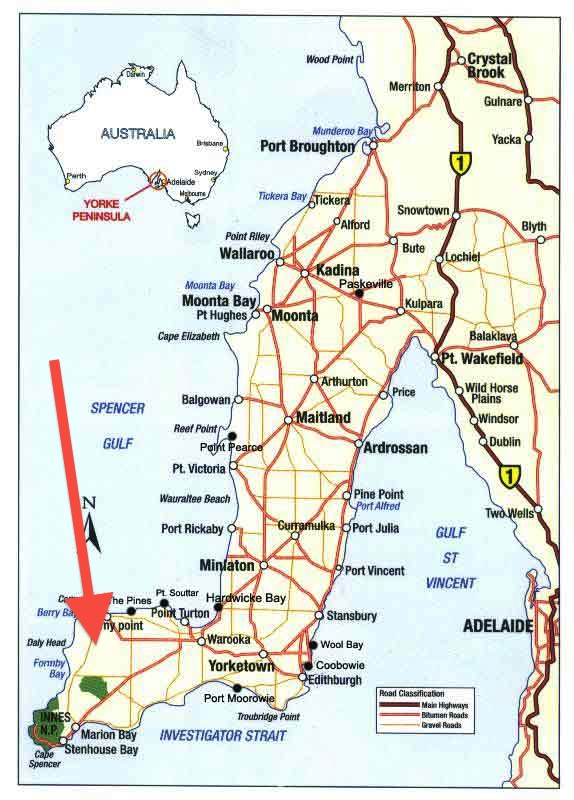 I accessed the Park via Gleesons Road, which runs off the eastern side of the Marion Bay Road. There is no public access road for vehicles into the park itself, so I simply climbed the fence to get into the park.  Carribie CP is a small park, with no visitor facilities.  It consists of 19.5 hectares of remnant sheoak and mallee, and is surrounded by farm land.  The Park was constituted by statue in 1972.

The vegetation of Carribie Conservation Park comprises open scrub dominated by Coastal White Mallee and Red Mallee with an understorey that includes species of Calytrix, Acacia and Correa.   Some sections of the park contain Drooping Sheoak woodland. There are 81 native plant species recorded from this park, though the only known species of conservation significance is the Western Daddy-long-legs.

Because the park is located about 7 km inland from the ocean, it was much hotter here than at Leven Beach Conservation Park on the coast.  And to make things worse there was no shade, and the bush flies were absolutely out in force. I could have gone deeper into the park to possibly get some shade, but I wasnt keen to do this as it was a hot day and I figured the goannas and snakes would have been enjoying the sunshine.  And they would probably have enjoyed even more, having a chomp on my lilly white legs.

So I set up my deck chair and foldable table in a cleared area on the southern side of the park.  I used the wooden permapine post park sign to secure the 7 m squid pole, and then ran out the legs of the dipole, using some rocks to hold them down in place

As was the case at Leven Beach CP, my first contact in Carribie CP, was John VK5BJE who had a beautiful strong signal.  This was followed by John VK5FTCT, and then dedicated Park Hunters Colin VK3UBY and his wife Sandra VK3LSC.

I managed one Park to Park contact whilst in Carribie, and that was with Larry VK5LY, who was portable in the Caroona Creek Conservation Park, in the mid north of S.A. with his dedicated wife Di.  Larry and I exchanged 5/9 signal reports.

Another enjoyable QSO was with Tom, VK5FTRG.  I had met Tom in September, when I travelled down to Mount Gambier to deliver a presentation to the South East Radio Group on SOTA & the VK5 Parks Award.  At that time Tom was patiently awaiting his Foundation call yo come through.  So ti was a pleasure to speak with Tom with his new call of VK5FTRG.  Congratulations Tom.

Sadly conditions on 40m SSB were quite poor, and there was quite a bit of activity from the Jamboree on the Air (JOTA) stations, so finding a clear frequency with a little QRP signal was a little difficult.

Whilst I was operating in the Park, I was visited by one of the locals, Colin, VK5FCJM, and also two other fellas who were staying on an adjacent property.  They were not all that familiar with amateur radio, so I showed them the set up and explained all about the hobby.

I worked the following stations on 40m SSB, in about 45 minutes in the park:-

Here is a short video of the activation which I have placed on You Tube…..

One thought on “Carribie Conservation Park”