Mount Billy Conservation Park is 199 hectares in size and represents some of the best preserved mallee and forest within the southern Mount Lofty Ranges.  The Hindmarsh Valley Reservoir can be located on the southern side of the park.  The Mount Billy summit is also located in the southern section of the park (sadly not a SOTA summit).  I have not been able to find a reference as to how the park/summit was named. The thick under storey of the park and the many creek lines provide habitat for numerous bird and animal species including the endangered Bassian Thrush, Chestnut-rumped Heathwren and the rare Southern Brown Bandicoot.  The Heath Goanna can also often be spotted, basking in the sun.

The scrub within the park is very thick, but there are two trails which takes you around the park: Banksia Hike (2.6 km), and the Mount Billy Hike (4.7 km).  Many of the native plants were out in flower whilst we were in the park, including a number of the Banksia species.  The park is full of Pink Gum, Blue Gum, Cup Gum, and Woodland Sheoak.  During spring, flowering orchids are found on the forest floor.

Just down the road from the park is the old Hindmarsh Valley school building which was established in 1867.  It is a beautiful old building and well worth stopping to have a look. 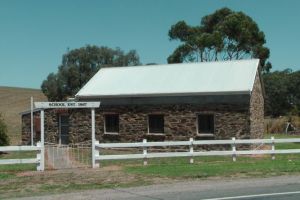 We found a nice operating spot, just inside the park gate on the Hindmarsh Tiers Road.  There was plenty of room to set up the table and chair, and extend the legs of the dipole.  The only down side were the large sand ants.  They pack a bite with a lingering sting, as I found out.

My first contact in the park was with Graham VK5KGP at nearby Victor Harbor, followed by Larry VK5LY in the Riverland, and Col VK5HCF operating qrp 5 watts, and Tim VK5AV from the south east.  Ian VK5CZ who was portable in Wirrabra Forest on his Elecraft KX3, came up to say goodmorning. Greg VK2FGJW/1 called in again from SOTA peak, Black Mountain, VK1/ AC-042.  I think Greg may have been infected by the deadly SOTA bug. Because the noise floor in the majority of the parks is non existent, you can work the weakest of stations.  So it is always pleasing to get some calls from QRP stations.  In Mount Billy I worked Col VK5HCF, Luke VK3HJ, and Ian VK5IS, all of whom were using QRP 5 watts or less. I managed a few more interesting QSO’s including Kevin VK3KAB who was portable on SOTA peak Trapyard Hill,VK3/ VT-005, Andrew VK3BQ who was in Mount Kosziusko National Park, and Steve VK3JY who was operating QRP with his Elecrat KX3, from his holiday home at Lake Eildon.  Unfortunately Steve was just outside the boundary of the National Park. I felt a bit guilty that I had run our of time to try 20m from the previous park (for some of the further afield VK’s who chase Parks), so I headed over to the 20m band hoping to get some further afield VK’s.  I called CQ for a while but there were no takers.  So I tuned across the band which was virtually empty, except for Peter VK3ZPF who was calling CQ from SOTA peak, Mount Matlock, VK3/ VC-001. After speaking with Peter, I was called by Dennis VK4SX, and Stu VK4SDD, both of who had great 5/9 signals coming in from Queensland. 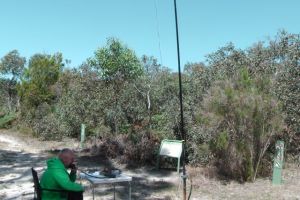 My first activation for Sunday 29th December, 2013, was the Spring Mount Conservation Park, which is situated about 24 km north west of Victor Harbor, and about 71 km south of Adelaide.

Marija and I headed out relatively early again after breakfast in the motel room.  This was our departure day and back to ‘reality’.  We had both really enjoyed our stay down at Victor Harbor, and the Comfort Inn is recommended.  Marija and I headed north out of Victor Harbor and then turned left onto the Hindmarsh Tiers Road, through the beautiful dairy country of the Hindmarsh Valley.  We then turned left into Spring Mount Road which offered spectacular views out to the ocean.

On the western side of Springmount Road there is a cleared area between the fence line and the scrub.  It was the ideal spot to set up the station.  We set up the foldable table & deck chair and erected the 40m/20m dipole with use of the 7m squid pole.

My first contact of the morning was with Parks stalwart, Larry VK5LY, followed by Col VK5HCF running QRP 5 watts, Brian VK5FMID, and Nev VK5WG who was also running QRP.  This was followed by a steady flow of callers from VK1, VK2, VK3 & VK5. 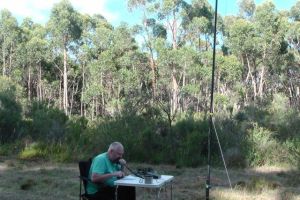 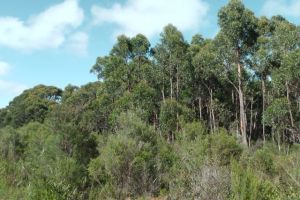 The band seemed to be in very good shape.  One of my QRP to QRP contacts was with Richard VK5ZRY who was operating with just 1/2 watt from Port Vincent on the Yorke Peninsula of South Australia.

Greg VK2FGJW/1 called in to say hi.  He was portable on Black Mountain in the ACT, using QRP 5 watts from his Elecraft KX3, and a dipole.  After some discussion with Greg about the Summits on the Air program, it was confirmed that Greg had indeed qualified for SOTA from his portable location.  I believe this was Greg’s first ever SOTA activation.

My last contacts of the day were with Joe VK3YSP and Julie VK3FOWL who were on the Christmas trip and were portable in the Little Desert National Park in western Victoria.

Whilst I was operating, I had some regular visitors.  But not humans !  They were little Superb Blue Wrens.  The male of the species has a really striking bright blue plumage on its head, neck, and tail.  They are an active and gregarious little bird.

Conditions on 40m SSB were really good, but I was already behind schedule, so we packed and headed off to the final park, the Mount Billy Conservation Park.

Department for Environment and Heritage, 2011, Parks of the Fleurieu Peninsula