On Thursday 2nd October 2014, I activated the Spring Gully Conservation Park (CP) in the Clare Valley.  I left work early on the Thursday afternoon, and headed towards Jamestown in the Mid North of South Australia, where I planned to stay for 2 nights and activate some of the nearby summits for the Summits on the Air (SOTA) program.  However, I had a little time up my sleeve on the Thursday afternoon, so I popped in to the Spring Gully CP on the way.  And why not, it was a beautiful sunny day….temperature about 25 deg c.

The park is located about 8 km south of Clare in what is called the Skilly Hills, in the Mid North of South Australia.  The park is about 400 hectares in size, and conserves a considerable area of grassy woodland in what is generally a cleared and settled landscape in the Clare district.  In 1962, the original 15 acres of the park was gazetted as a wildlife reserve.  This was later extended to include the springs that give the park its name.  There is a seasonal waterfall within the park, which plunges from a height of 18 metres following rain.

Spring Gully CP was originally created to protect the only stand of Red Stringybark (Eucalyptus macrorhyncha) trees in South Australia.  This eucalypt  is widespread in eastern Victoria and eastern New South Wales, but is very rare in South Australia.  The trees gain their name from their red trunk once their fibrous bark is removed.  These trees are delicately placed, as thousands died following the extremely dry period between mid 1007 to early 2008.  A small section of the park was also burnt during a lightning ignited bushfire in November, 2009.  The park also protects White Spider Orchids, Donkey Orchid, and Sun Orchid, and other smaller plants below the canopy in the grassy woodland ecosystem.

Prior to European occupation of the area, the land on which the park is located on, was frequented by the local Ngadjuri aboriginal people, providing an abundance of food.  However, upon the arrival of the Europeans, the area was extensively used for logging timber and for the grazing of stock.

The park is inhabited by a variety of wildlife including Western grey kangaroos, euros, echidnas, and Common brush tail possums.  Over fifty species of birds have been recorded in the park including numerous parrots, and kookaburras.  There was certainly no shortage of kangaroos, with quite a few spotted both on the way to the park, and also within the park itself.

I accessed the park by travelling off Horrocks Highway, onto Bayes Road, then left onto Hughes Park Road, and then right onto Sawmill Road.  At the hairpin on Sawmill Road, there is a dirt track (Ridgetop Track), which will take you all the way up to the lookout within the park.  The lookout is where I decided to set up.  There are a number of other possibilities in the park, including the Blue Gum Lookout day visitor area. 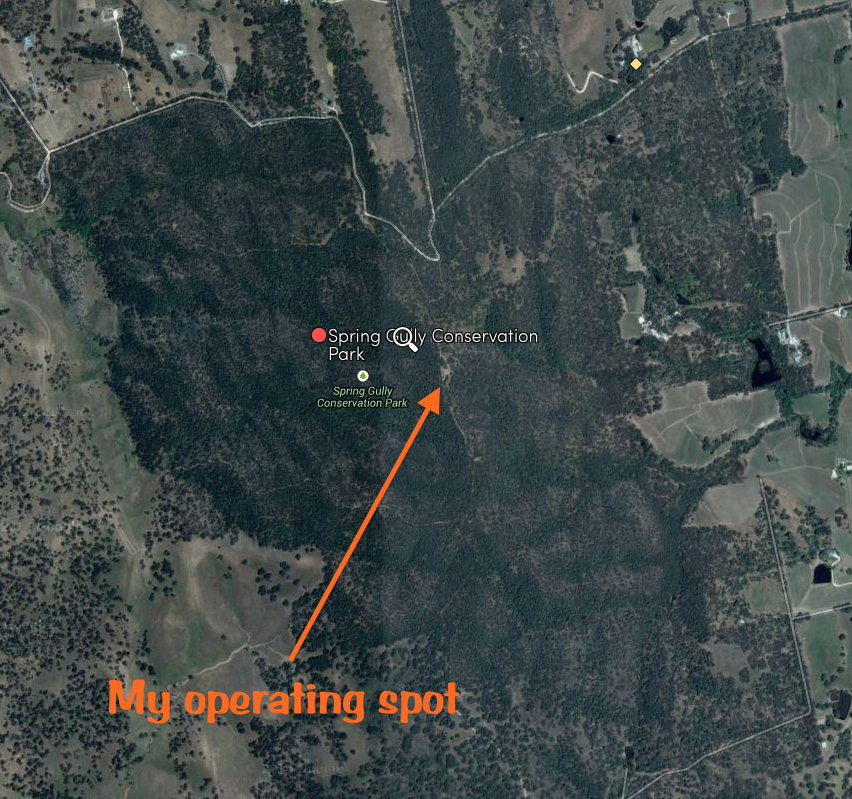 There is plenty of room at the lookout to string out a dipole, which is exactly what I did…erecting my 20m/40m Band Hopper linked dipole, which I supported on the 7 metre squid pole.  For this activation I ran QRP 5 watts with the Yaesu FT-817nd, powered by a 12 volt 4 ah sealed lead acid battery.

I had notified some of the keen VK5 Park Hunters of my intentions, so when I asked if the frequency was in use on 40m, I was welcomed by a number of the regulars.  My first contact was with Col VK5HCF down in Mount Gambier in the South East of South Australia.  Col was running his usual QRP 5 watts and had a very nice 5/9 signal to the park.  This was followed by David VK5KC and John VK5BJE, who were both portable at the caravan park at Clare, just down the road.  Not surprising that they had 5/9 signals.  Greg VK5ZGY then called in and this was followed by Nick VK3NAL who was low down in signal strength and was also struggling with my low powered signal.  Nether less, we managed to make the contact which is all that counts.

A number of the regular VK5 Park Hunters called in after this, along with Ron VK3JP who has become a regular park hunter during my recent activations.  I also received a call from Bill VK5WCC at Millicent in the South East.  I was Bill’s first ever park contact.  Welcome to the world of park hunting Bill.  It was also good to speak with Ivan VK5HS who was mobile with a very good 5/8 signal.

About half way through the activation, I had some visitors….. David VK5KC and John VK5BJE.  After a quick chat, we organised to catch up for a quick ale once my activation was complete, and advised that Ian VK5CZ would also be joining us.

My last contact was with Brian VK3MCD who was portable on Mount Baranduda, VK3/ VE-189, for the SOTA program.  Brian and a good 5/5 signal coming in from north eastern Victoria, and I received a 5/7 signal report from Brian.

So after 30 minutes in the park, I had a total of 16 contacts in the log, from VK3 and VK5.  It was time to pack up and head off to catch up with David, John, and Ian at the caravan park.  ‘Beer o’clock’!  Thanks to everyone that called in.