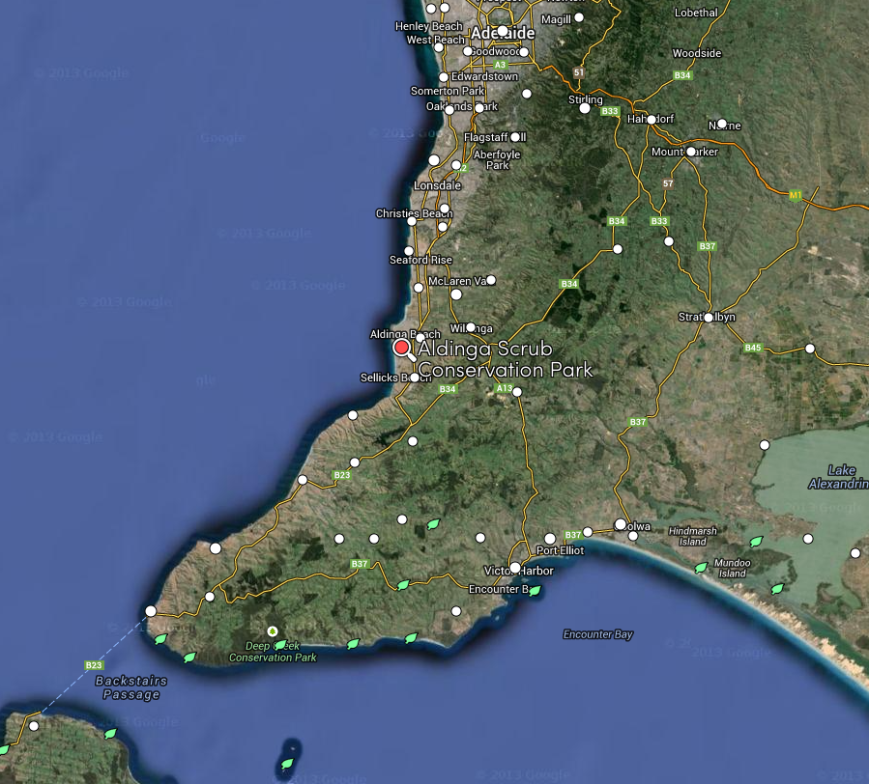 The park, which is 300 hectares in size, is home to a diverse range of rare plants and is recognised as a significant area for the conservation and protection of the region’s flora.  The park consists of sand dunes, sand blows, mallee scrub, lacy coral lichen, closed heaths, and remnant red gum forests.  A variety of wildlife lives in the park including Brush-tailed possums, and Short-beaked echidnas.  Over 166 species of birds have been recorded in the park.  The park is also home to numerous reptiles including the dangerous Brown snake, and the Red Bellied snake.  Fortunately I did not encounter any of these, making as much noise as possible to discourage them from paying me a visit.

Prior to European settlement, the area was part of the territory of the Kaurna Aboriginal people.  The scrub provided an abundance of food and materials used for utensils.  Shellfish, fish, marsupials, reptiles, birds and plant foods such as nerd, moonrise, yams, and quandongs were abundant in the area.

Aldinga is the final spelling of a word that has masqueraded as Ngalti-ngga, Audlingga and Alinghi.  The meaning of which nobody has ever been able to establish with any degree of authority.  There are widely differing opinions suggesting that this means ‘tree district’, ‘much water’, ‘battle or burial ground’, and ‘open wide plain’.

Mr. F. Culley was the first European settler in the area, in 1857.  Prior to World War One, the scrub was subdivided and several attempts were made to farm the area.  However, this did not prove to be viable, due to the sandy soil.  During the 1960’s, the local Willing Council became concerned that the subdivision of the area would cause erosion.  As a result, between 1965 and 1982, 300 hectares were purchased at Aldinga, to be managed by the State Planning Authority as an Open Space Reserve.  It was not until 1985, that the reserve was declared Aldinga Scrub Conservation Park.

To get to the park I travelled south through Echunga, on to Meadows and then Willunga.  This is a beautiful drive through the southern Mount Lofty Ranges.  I then travelled west along Aldinga Beach Road, towards the ocean, and then along the Esplanade and then left into Quandong Avenue.  I parked the car at the corner of Quandong Avenue and Acacia Terrace, and entered the park via Gate 3.

I set up about 50 metres inside the park boundary, under the shade of some gum trees, as it was a warm afternoon.  The temperature was about 30 degrees C. 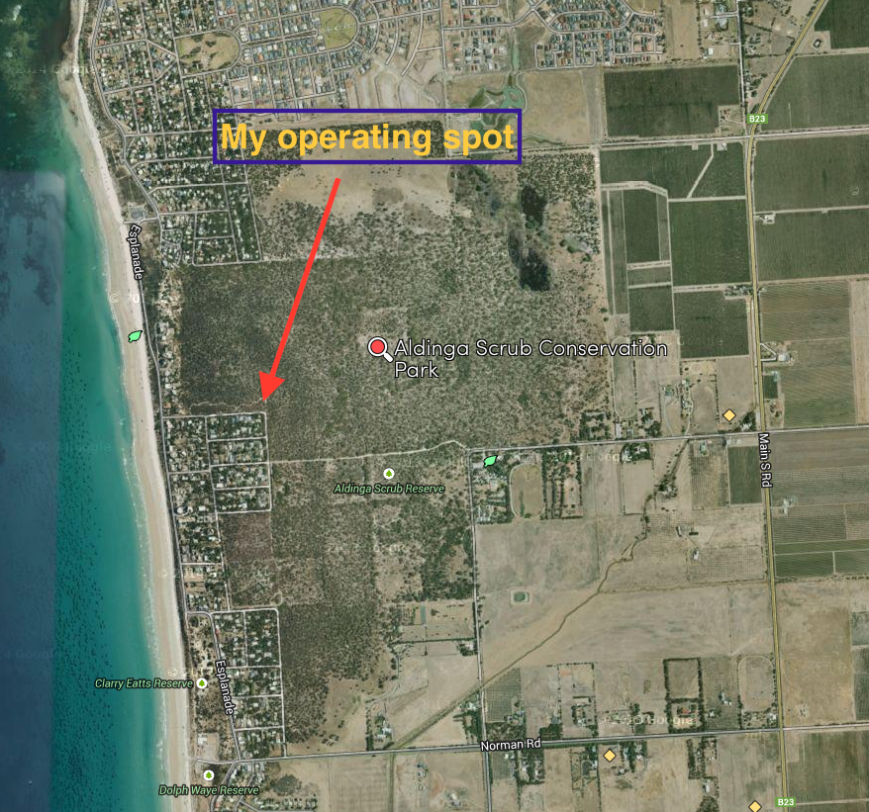 After setting up the linked dipole, I turned the radio on to find that the 40m band was very noisy.  Prior to calling CQ, I tuned across the band and did not hear a single station.  But what I did hear was a lot of noise.  And to make things worse, there was some form of pulsing noise every 10kc.  Not sure if it was a nearby electric fence.

So back to 7.095 I went and put out a CQ call.  No takers.  This was very strange.  The park hunters are normally queued up waiting to work the activators.  Another CQ call, and no takers.  This was the pattern for the next 5 minutes, despite me sending out a few SMS messages to advise that I was on air.  No takers.  Finally I received a call from Mark, VK5QI, who was operating portable in the Black Hill Conservation Park.  So, despite a very slow and not very promising start, it was refreshing to get my first call.  And a ‘park to park’ contact to boot!  Mark was initially a good 5/6, but then he was GONE!  It was as if the band had dropped out.

But I persevered and continued to call CQ.  Tony VK5FTVR from Strathalbyn then called in.  However, Tony’s signal was well down on what I accustomed to.  This was followed by Greg VK5GJ from Meadows, who normally always calls me using just QRP 5 watts.  Today he was running 100 watts and was only a 5/3 at very best.  And Greg was really struggling with me.  Wow, this was not good.  Despite a number of further CQ calls I had no takers.  I did receive some SMS replies from John VK2AWJ and Larry VK5LY, advising that they had no reception and that the band was ‘dead’.

So I lowered the squid pole, and removed the links in the dipole for 20m, hoping that conditions there would be a little better.  I was to be very let down.  I called CQ for about 5 minutes on 14.310 and did not have a single caller.  So I tuned around the 20m band, and the only signals I could hear were those of Col VK4CC and John VK4LJ, running the ANZA DX Net on 14.183.  But their signals were extremely low as well.  I was starting to think there was a problem with the antenna.  But the VSWR was showing no indication of an issue.  Then I heard Col mention that there had been an X class flare.  There was the explanation.  It was time to pack up the gear and head home.  No reason to persevere.

If you want to read a bit more on solar flares, have a look at the following….. 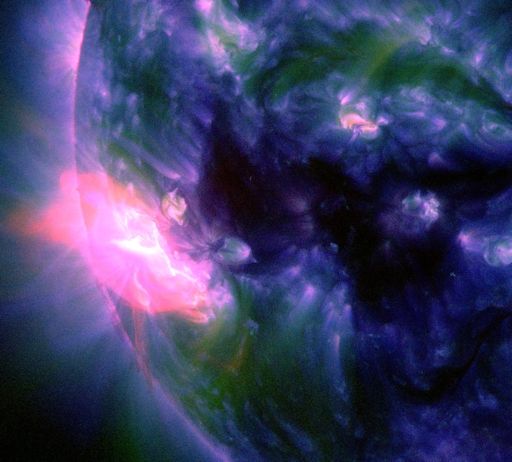 The graph below shows the X class flare.  It commenced at 0417 UTC, and it peaked at 0503 UTC.  My QSO with Mark was right in between this. 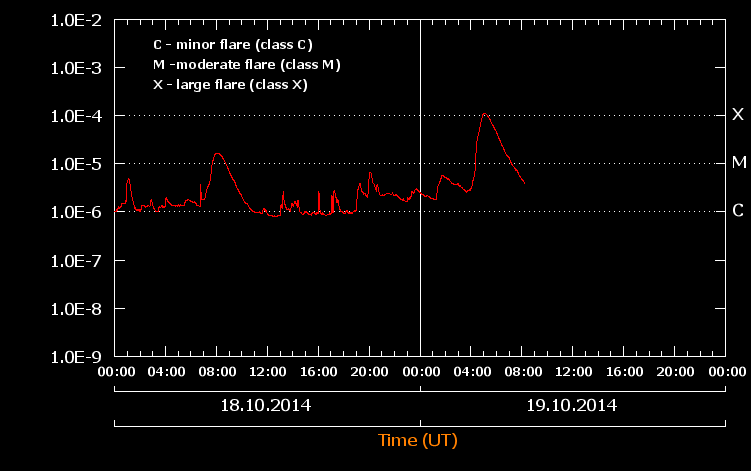 I had a grand total of 4 QSO’s for this activation.  This was by far, the most least successful activation I have every undertaken.