Pooginook Conservation Park was our first park activation for Saturday (18th April 2015) after leaving the Riverland Radio Club’s get together at Overland Corner.  Pooginook was just 23 km up the road from Overland Corner.  It was well sign posted and easy to find and easy to access.  The park is located about 200 km north east of Adelaide and is located in the Riverland region of South Australia. 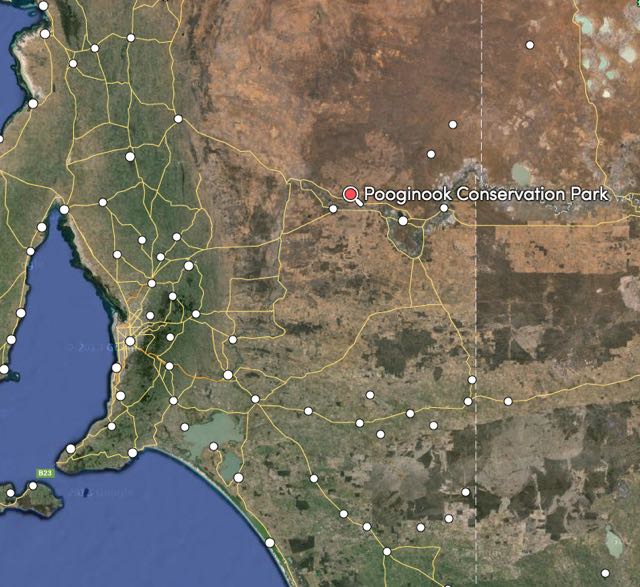 Above: Map showing the location of Pooginook CP.  Map courtesy of mapcarta.com

Pooginook CP consists of mallee scrub and rolling sand dunes.  The northern part of the park is dense mallee scrub, while the southern section features open mallee as the area was once largely used for wheat farming.  The park provides refuge to a large amount of wildlife including Western grey kangaroos, Red kangaroos, echidnas, fat tailed dunnarts, Southern Hairy-nosed wombats, Balam’s mouse, and the rare malleefowl.  Marija and I saw quite a few wombat burrows in the park.  The wombat population was introduced to the park in 1971 and have become well established.  Over 20 species of reptiles have been recorded in the park including Desert skinks, Nobbi dragons, Barred snake-lizards and Jewelled geckos.

The park is quite large and is about 2,862 hectares in size.  The name Pooginook, comes from Aboriginal words meaning ‘place of good food’.  The Ngawait aboriginal tribe occupied this area.  Pooginook Station was established in 1851 by John Taylor.

We accessed the park off the Goyder Highway and followed the eastern boundary track.  I strongly suggest that if you venture to far into the park, that you only try to do so if you have a 4WD.  If you try your luck with a conventional vehicle, I am quite confidence in saying that you will get bogged.

Although it had become quite overcast, the rain was holding off.  In fact, when the sun poked its head out from behind the clouds, it was quite warm.  We parked the 4WD just off the main track and walked a bit into the scrub and set up my fold up table and deck chair and all the radio gear. 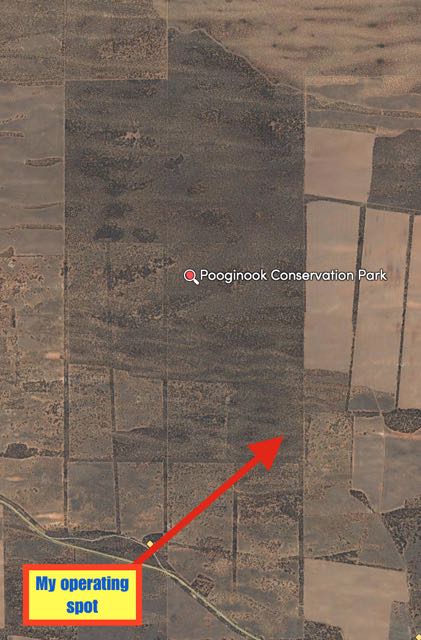 Above: Map showing out operating location.  Map courtesy of mapcarta.com

Prior to calling CQ I had a quick look around the 40m band and found Tony VK3VTH calling CQ from the Barmah National Park VKFF-739.  Tony had a solid 5/9 signal.  I then went down to 7.095 and started calling CQ and this was responded to by Greg VK5GJ, then David VK5KC, and then Arno VK5ZAR.  A good little flow of callers from VK2, VK3 & VK5 ensured.  My 17th contact for the afternoon was with Tim VK3MTB who was portable in Holy Plains State Park VKFF-758, near Sale in Victoria (5/7 sent and 5/8 received).

As I normally do during my activations I listened out for QRP, mobile and portable stations.  It can be a bit of a challenge to break through the mini park pile ups if you are one of these stations, so I always ask for the QRO stations to stand by while I give the lower power stations a chance.  This resulted in me working Matt VK5ZX who was mobile at Freeling, Marc VK3OHM operating QRP, Peter VK3PF QRP, and Brendon VK5FBFB who was also QRP.

After working 42 stations on 40m I decided to head over quickly to 20m and try for some of the further afield VK’s.  I called CQ on 14.310 and this was answered by Gerard VK2IO (5/9 both ways).  But Gerard was the only taker after about a dozen CQ calls.

Marija and I spent about 1 hour in the park, before packing up and heading off to the Murray River National Park.  I had a total of 43 contacts in the log.

The following station was worked on 20m SSB:-

Department of Environment and Natural Resources, Parks of the Riverland