Marija and I kicked off Thursday 26th May 2016 with breakfast in the motel room, and we then headed off for a drive around some parts of the island that we had not yet explored.

As we drove passed the school we noticed that there were a lot of motorcycles parked out the front, many with Learners plates on.  These belonged to the students.  Children aged 15 years can get a Learners permit to ride a motorcycle on Norfolk Island. 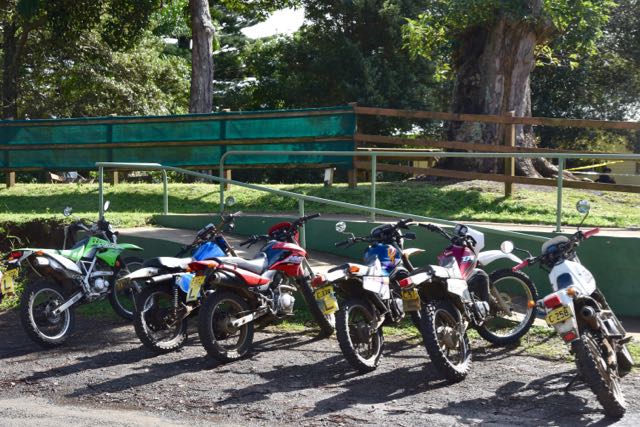 We then drove out to Point Blackbourne and Steels Point on the eastern side of the island. 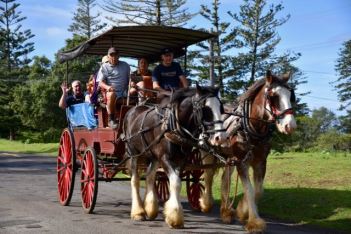 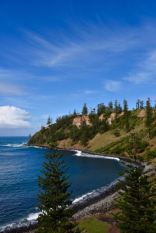 Next up we drove along Cascade Road.  Here, the home owners have named their properties after the rooves on their houses, e.g. ‘blue roof, ‘can’t see the roof’, ‘rusty roof’ etc.  Its an interesting and quirky drive.

We then headed down to Cascade Pier on the eastern side of Norflk Island.  A $13 million upgrade to the Pier has been announced.  This will allow the loading and unloading of cruise ship passengers and freight to occur.  There is an old boiler down at the Pier, a reminder of the old whaling days on the island. 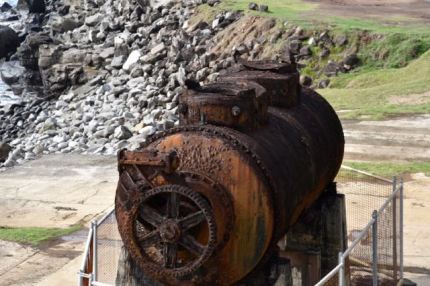 Marija and I then visited the Cockpit Waterfalls at Cascade Reserve.  If you do visit the waterfalls, try the southern side of the falls.  They are much easier to access than the very narrow and dangerous track on the northern side. 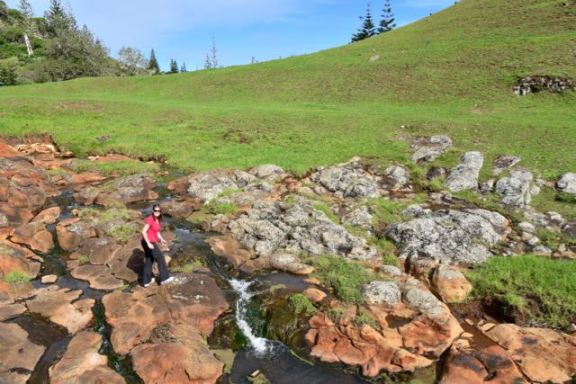 Our next stop was the Norfolk Island Police Station to say g’day to the local boys in blue.  We had a very interesting chat with Dan, one of the Leading Senior Constables on the island, from the Australian Federal Police.

It was then back to the Paradise where we picked up Peter VK3PF and we headed out to the shack of VK9NT in the north western corner of the island.  We enjoyed a look at the set up of the Dxpedition, a good chat, a coffee and some cake. 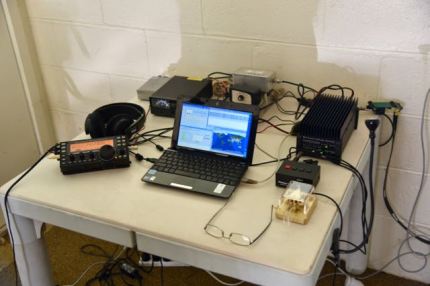 Whilst we were visiting the boys, we experienced a small earth tremor, measuring 5.4.  It was interesting that Lee VK3GK and I who were sitting down having a chat, distinctly felt it, but a few of the others who were standing up, did not.  The following is a short story from ‘The Norfolk Islander‘ re the tremor…

We then dropped Peter back to the Paradise and then headed to Selwyn Reserve which is located near the north western corner of the island.  The reserve is about 21.21 hectares in size and extends up to 300 metres inland.  The reserve’s spectacular west-facing cliffs rise to about 80 metres above sea level.  The northern portion of the reserve was proclaimed as ‘Selwayn Reserve’ in February 1937.  In 1968 the reserve was renamed ‘Selwyn Recreational Reserve’, but was changed back to the original name in 1999. 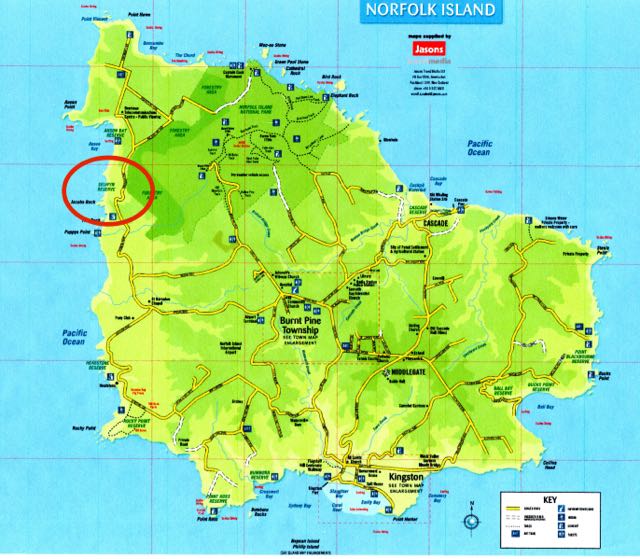 Above:- Map showing the location of Selwyn Reserve on Norfolk Island.

I started calling CQ on 7.144 and this was answered by Derrick VK2DEK, followed by Bob VK3BL/7, Paul VK2HV, and then Steve VK4QQ.  All signals were between 5/7-5/9, with the stronger signals coming from VK2 & VK4.  Equally, my signal was stronger there as well.  Next up was my first New Zealand contact from Selwyn Reserve.  It was Paul ZL1XH with a beautiful strong 5/9 signal.  Contact number 13 was Dave KD6BZN in California who was a good 5/9 and reciprocated with a 5/5 signal for me on the west coast of the USA.

I worked a total of 20 stations on 40m before deciding to have a listen on 20m.  The local time on Norfolk was 5.00 p.m. and the 20m band seems to work a little better at that time.  I headed for 14.310 but found it was already occupied by Heath VK3TWO/9 on Norfolk.  So after logging Heath, I headed down the band to 14.250 and started calling CQ.  This was answered by Rick VK4RF/VK4HA, following by Ian VK5IS, Steve VK4OZI, and then Steve VK4QQ.  Signals were very strong and much better than 40m.

A pile up soon developed and I went on to work a total of 49 stations on 14.250 from Australia (VK1, VK2, VK3, VK4, VK5, VK6 & VK7), Canada, USA, Alaksa, and Japan.  This included a SOTA contact with Compton VK2HRX who was portable on Bakers Downfall Hill VK2/ NW-006 (5/8 both ways).  I received a few comments from some of the mainland VK’s that I was being called by Europe.  Sadly I could not hear any Europeans.  The propagation on Norfolk is very different to that on the Australian mainland. 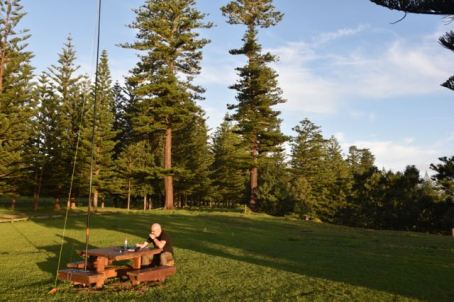 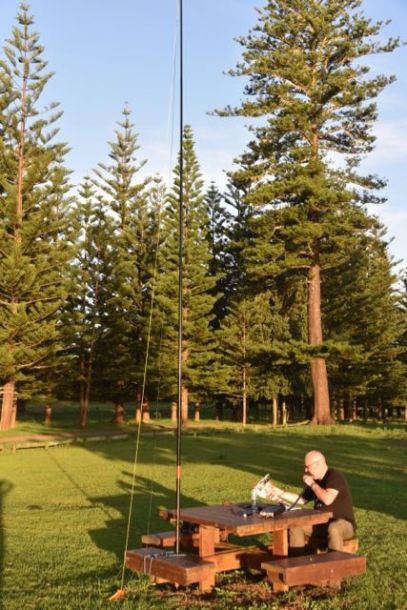 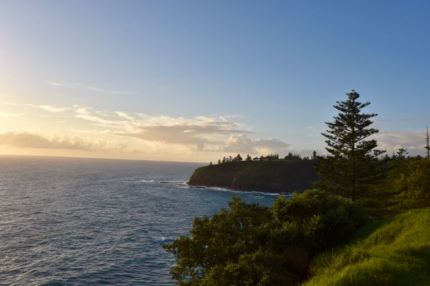 I then headed back to 40m to 7.144 where I worked a total of 37 stations in Australia (VK1, VK2, VK3, VK4, VK5, & VK7), New Zealand, New Caledonia, and Norfolk Island.  This included a SOTA contact with Heath VK3TWO/9 who was operating portable on the top of Mount Bates on the island.  I did try to break in to the Triple H Net on 40m, but sadly the USA guys were not hearing me.

Marija and I enjoyed a magnificent sunset and we then headed back in to town where we caught up with Heath VK3TWO and wife Monique VK6FMON for tea at the Bowls club.